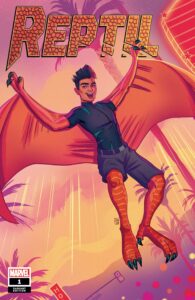 Like so many heroes before him, Humberto is a normal kid. Except…this “normal kid” can turn into a dinosaur. Thus begins the magnificent story of Reptil

, a fun and refreshing comic that features a Mexican-American superhero coming to terms with his newfound powers. Humberto’s arrival in the Marvel Universe is a welcome breath of fresh air – there are too few Latinx representations within the comic world. Humberto is a kid that is dealing with the loss of his parents and figuring out how to lead a “normal” life. Does life click into place once you’ve been enrolled at the Fifty State Initiative? Clearly, there are obstacles and revelations to be had.

Humberto graces our presence in Avengers: The Initiative

. Born to paleontologist parents, Humberto was given a special fossil that grants him the ability to transform into any type of dinosaur. He inherited the fossil shortly after his parents disappeared, leaving him to live with his grandfather. Tigra is encouraged to recruit Humberto for a special mission to defeat Stegron, who was embarking on a quest to reanimate fossils. All goes awry when it is discovered that Humberto has a hard time controlling his powers. Eventually, a new law – Kamala’s Law –  is proposed to dismiss him from the Academy and to start a new life with his extended family. 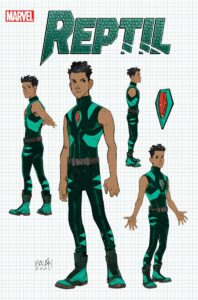 This is where his new adventure begins. Humberto is forced to relocate with his grandfather to his aunt’s house in LA. It is there that he has a chance to reconnect with his cousins, Eva and Tito, as he tries to come to terms with the disappearance of his paleontologist parents. When Humberto was young, he was on an expedition with his family, and he uncovered the mystical power-granting amulet that allowed him the ability to transform into any prehistoric creature. In a heart-touching scene in #2, his mother explains to him “Quetzalcoatl,” an Aztec name. It is a gentle reminder of Humberto’s rich roots and also a moment of connection between his superpowers and his cultural upbringing.

After a day out with his cousins to grab tacos, a mysterious villain appears to take his amulet away from him. The mystery villain gives Beto (Humberto’s nickname) an ultimatum – give him the amulet and he will tell him where his parents are. The villain also has his own amulet, which begs the question as to why he wants to take Beto’s. Eva’s cousin and the police interrupt the altercation, sending the shaken kids home. 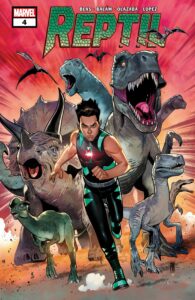 Reptil #4, cover by Paco MedinaMega-Billionaires Vs. The Kids

Beto has been forced to not use his powers, which turns into a conversation about the law. Though the equation of “super powers” versus “slavery” was a bit uncomfortable, there were lines being drawn between that and being an immigrant, forced to suppress who you truly are. Still, the Black experience in the U.S. has been co-opted to be used as an example for far too many movements. With the issue of anti-Blackness never seeming to become a part of the conversation, this part didn’t necessarily work, though points were made.

Beto’s cousins encourage him to use his powers to confront the threat. Beto’s grandfather, interrupted from his sleep, reveals the mystery villain to the trio. Henry Desjardin (Megalith) is a bizarre, Elon-Musk-style Silicon Valley billionaire (yep) with a taste for world domination (not shocked). After discovering his identity, Julian, Eva and Beto decide to join forces and go to the Dinosaur Realm.

Eva, who has been studying witchcraft in order to protect herself from racists (valid), is able to open the portal for them. Once in the Dinosaur Realm, the trio is saved by The Hag of the Pits, who reveals that she is responsible for the creation of the amulet Beto uses, which was made with the intention of saving the world and the dinosaurs. Of course, Beto had no idea of the responsibility he carried in his chest, so the news hits him hard.

The Hag, who created the stone for her son, threw it into the pits after he proved to be unworthy of its power. The stone separated upon impact, leading Beto to believe that Megalith had found the other piece. In order to find his parents and bring the rest of the amulet home to himself, he must embark on the dangerous quest to confront Megalith. Of course, he cannot do it alone. 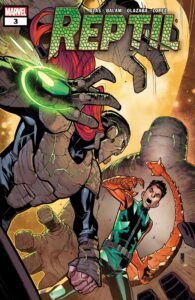 Reptil #3, cover art by Paco MedinaTogether, We Can Overcome

Amidst the chaos, Beto is reassured by his cousin Julian that it is okay to doubt your own strength. Julian is gay and admits to his own struggles of being Chicanx and queer. The idea of machista and internalized homophobia is something Julian had to work to overcome. Beto has to do the same with his idea of what his powers can accomplish.

The conversation introduces a lot of topics that can be shared culturally – the idea of going to therapy or accepting different variations of what it means to be Mexican (or Black, for that matter). To admit that the systems of oppression have a mental effect on us can be seen as a sign of weakness – and to be vulnerable enough to accept help is a major feat. Whether it be combating homophobia, racism, or sexism, the hard fact of needing assistance in order to survive is something that can transcend cultural barriers.

It is through Julian’s experience that Beto is inspired to continue his path and embrace his “otherness”. His primary fear is that he will lose control of his powers and hurt people. Julian encourages Beto to trust his abilities to realign himself by reminding himself that he is in control. It is one of the most heartwarming scenes throughout the four-issue run, but it’s also important! For cisgender men to embrace vulnerability in the superhero universe is a tremendous feat and should set a standard to diversify the idea of what a superhero could and should entail. 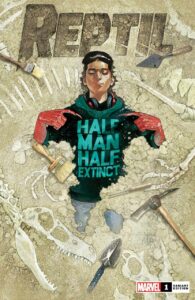 Reptil #1, Del Mundo variant cover“Love is the answer – by any means!”

After the inspirational heart-to-heart session between the cousins, the quest to take down Megalith begins and the search for Beto’s parents fuel the quest. After finding Desjardin’s house address in LA, they take to the streets for their quest. As it turns out, Megalith had developed a device to “look” like Desjardin in order to get the amulet Beto’s parents had dug up. As it turns out, Megalith is the scorned son of The Hag of the Pits, his quest for power knowing no bounds. It is obvious that he is jealous of Beto’s love for his parents, which is why he used them as a bargaining chip to receive the rest of the amulet. He was indeed guilty of killing Beto’s parents but retained their spirits in his amulet cuff, as a sort of morbid token.

Mommy issues and the lack of love inspire Megalith to obtain the amulet in full, but it is the familiar solidarity of Julian, Eva, and Beto that conquers the day. The finale of the series culminates into a conclusion that reminds us of the importance of family and the importance of love and acceptance. Megalith’s villain origin story was his repulsion of love and care. Something that can be said about many people who project their fear and hatred unto those who only want to see love in the world.

Reptil is full of love and surprises, and it’s sad that it’s so short. However, since Beto has figured out a way to control his powers, it will be interesting to see his reappearance alongside the Avengers. Terry Blas, who is also gay, has infused so much of his insight and identity into Julian that it makes for a fascinating tale of the writer controlling the narrative. It is very obvious that Julian holds a fragment of Terry’s spirit and it is even more inspiring to witness the wisdom that comes from the character.

Reptil is not a “woke” comic – it is a real-life story about real people that have had to find their place in a world that will not accept them for who they are. Though the fantastical element of dinosaurs has to exist because it is a superhero story, the characters in those pages are just as real as you and I. To exist in this world as a marginalized person is to find methods of survival that do not strip you of your pride and strength. It is a balancing act, but as Beto has proven, all it takes is the right amount of love, care, focus, and acceptance to continue the good fight. May we all internalize that wisdom from Reptil.

The post Love is the Answer in Reptil appeared first on Comic Book Herald.