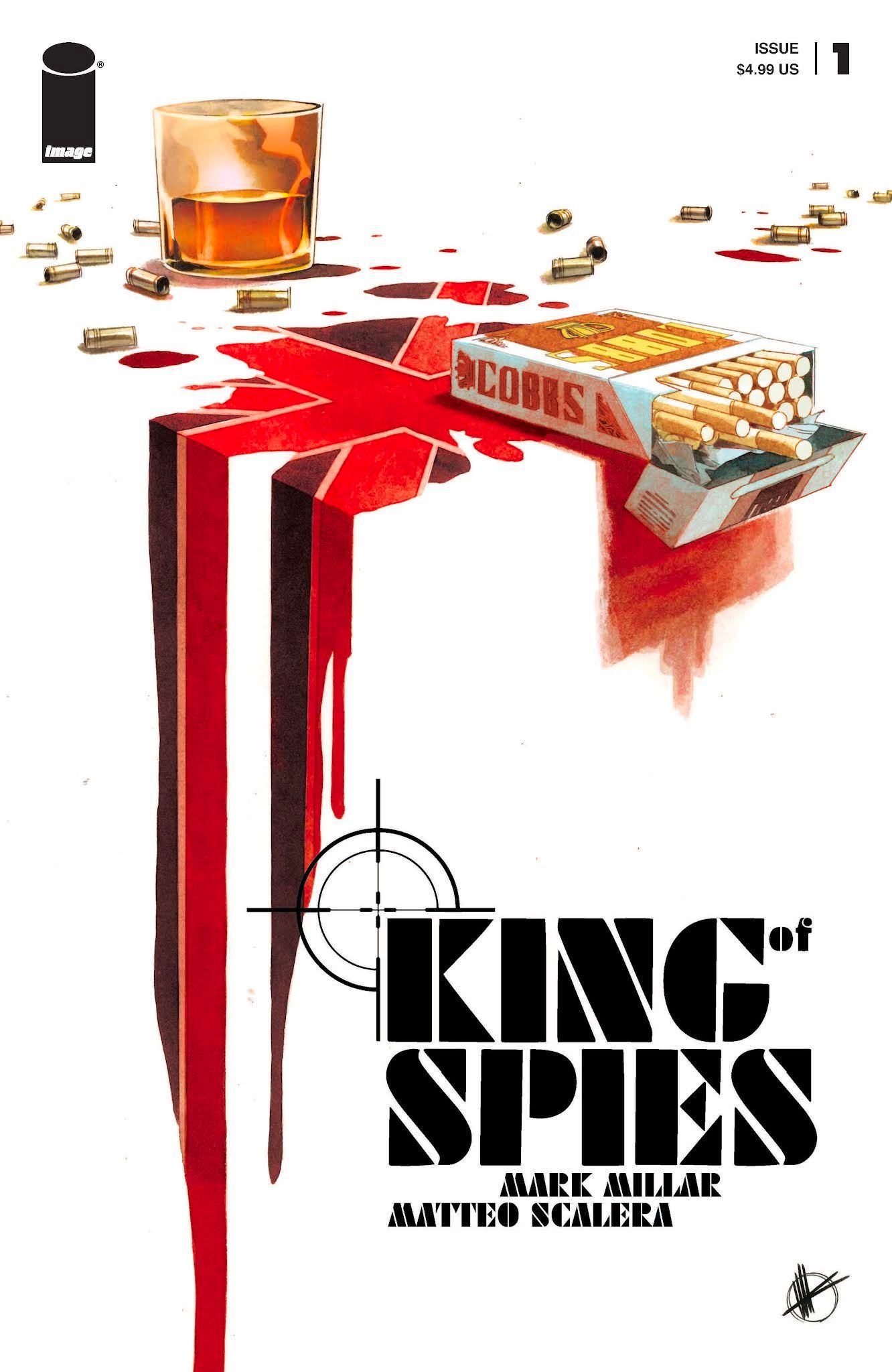 Being a spy isn’t all it’s cracked up to be in Millarworld’s latest series King of Spies. Created by writer Mark Millar and artist Matteo Scalera, the series is a scathing critique of what happens when dedicating your life to queen and country isn’t enough to fill the emptiness inside your soul. Unlike Millar’s Kingsman franchise, which juxtaposes multiple generations of secret service killers, King of Spies narrows its focus to the lone Rolland King, who decides that he is done playing nice with others. It is a remarkably refreshing series that shows the power of Millarworld’s publishing model, while highlighting the unique creative potential of comics.

King of Spies #1 opens in 1990 with King fighting against an ungodly amount of henchmen on behalf of Her Majesty’s Secret Service. As King races through the streets of Panama, a pair of knife-wielding siblings attack him. Of course, King quickly dispatches the team and stows away on a private plane, which allows him to sneak onto another plane and take down his actual target. The story then cuts to the modern-day, where a 65-year-old King struggles to make it through his everyday life without pain. The Queen of England summons King to commemorate his years of service with a medal, but he is left with a palpable sense of dread as he faces retirement. Later, King discovers that his body’s struggles are worse than he ever expected and he only has six months to live. Infuriated by a lifetime of bad choices, King strikes out on his own and dedicates his final days towards ridding the world of all of its cruel, corrupt and murderous monsters.

RELATED: Super Crooks Anime Is Mostly a Prequel to the Source Comics

King of Spies #1 allows Millar to explore the spy genre by asking what happens when somebody lives to see the day where they no longer have value to their country. After more than 30 years of service, King finds himself left with little to celebrate his life other than a bad back and a cheap medal. This disgruntled perspective frames the rest of the story as Millar deconstructs the James Bond archetype. King is an engaging lead who distinguishes himself from other spies with his palpable sorrow, regret and frustration. King has seen everything that life has to offer, but realizes the world is not enough and he would have been better off staying at home with his kids. Anybody who finds themselves at a crossroads in their lives can connect with this story.

One of the greatest strengths of Millarworld’s comics is that each different story is shaped through the artist’s lens. Scalera’s vision for King of Spies is apparent from the beginning. Characters burst through the confines of the panels, exploding off of the page with sharp action lines. The kinetic energy of King’s heyday contrasts with how he appears as an older man, hammering home the fact that King only feels alive when he’s killing somebody else.

Colorist Giovanna Niro complements Scalera’s work, using a stylized palette that gives each scene its own atmosphere. This talent is most obviously apparent in the book’s opening, as Niro depicts the golden age of King’s youth in yellows, oranges and browns. The lush, nostalgic aesthetic is stunning and clashes with the murky greys of King’s later years, amplifying the character’s internal struggle.

Overall, King of Spies #1 is a sensational read that plunges readers into King’s end-of-life crisis and sets him up for one hell of a last ride. The book alternates between explosive action and mind-numbing depression to cast its lead as a man who has no choice but to face his inevitable mortality. Millar and Scalera are both at the top of their game, and their obvious chemistry makes King of Spies endlessly enjoyable.