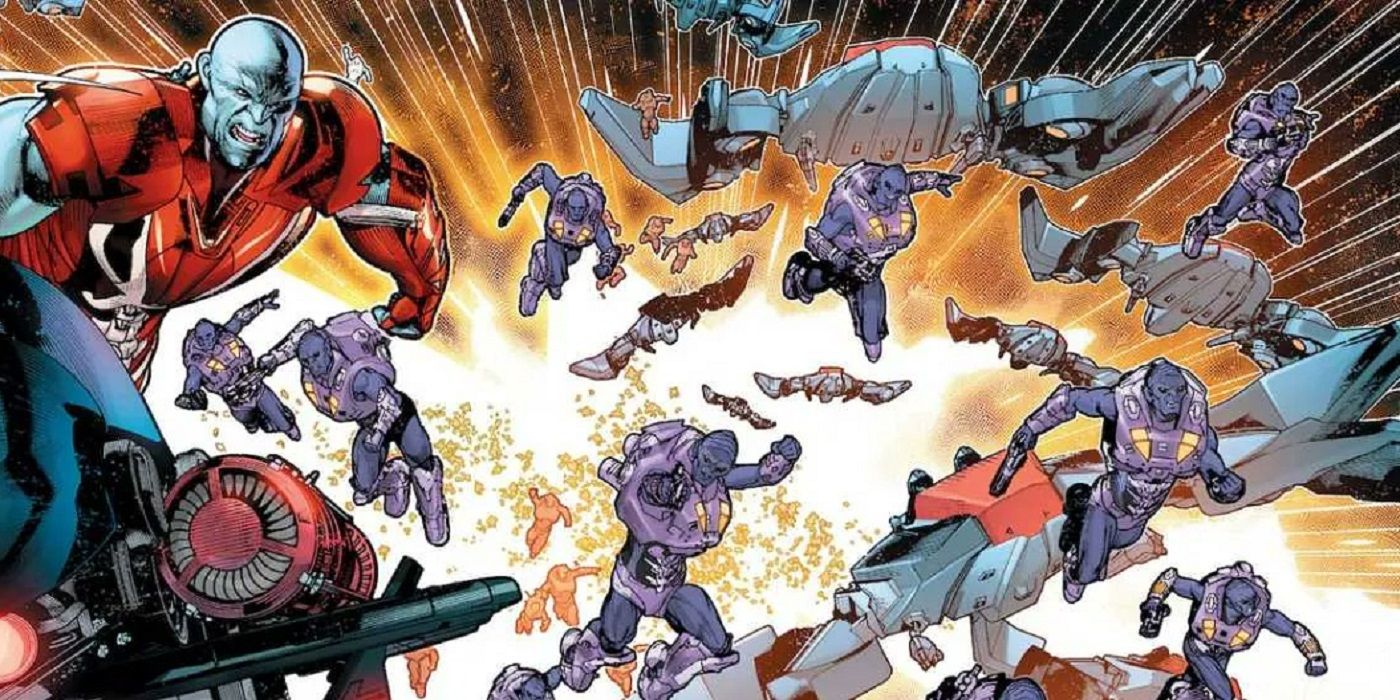 A preview for Justice League Incarnate #1, DC’s new Multiversal Justice League, shows that the opening story arc of the new series, including the introduction of the new character, Doctor Multiverse, will involve the Retaliators of Earth 8, who are the DC equivalent of Marvel’s Avengers.

Dennis Culver, who is co-writing the new series with Joshua Williamson, shared some preview pages (drawn by Brandon Peterson and Hi-Fi colors, with letters by Tom Napolitano) of the first issue on his Twitter account while also revealing the title of the first issue, which is “THE WORLDS OUTSIDE YOUR WINDOW.” That title is a clever pun based on how Stan Lee always used to describe the Marvel Universe (that the stories felt as though they were set in the same world that was outside your window), another reference to the Marvel homage at the center of this issue (with a decided Multiverse spin, of course, with the multiple worlds).

RELATED: A Justice League Hero Is Going to Die in Early 2022

The Retaliators and Earth 8 itself, debuted in the first issue of Grant Morrison and Ivan Reis’ Multiversity back in 2014. The team is led by the American Crusader (a riff on Captain America) and its notable members include Behemoth (Hulk), Deadeye (Hawkeye), Red Dragon (Black Widow), Wundajin (Thor) and Machinehead (Iron Man). They are, themselves, updated versions of a previous alternate version of the Avengers that debuted in a 1970 issue of the Justice League of America where the Avengers stand-ins were called the Champions of Angor.

In this issue, we learn that the Retaliators have history with Doctor Multiverse, the mysterious new character who makes her debut in this first issue of Justice League Incarnate and the American Crusader is not a fan of the good Doctor. 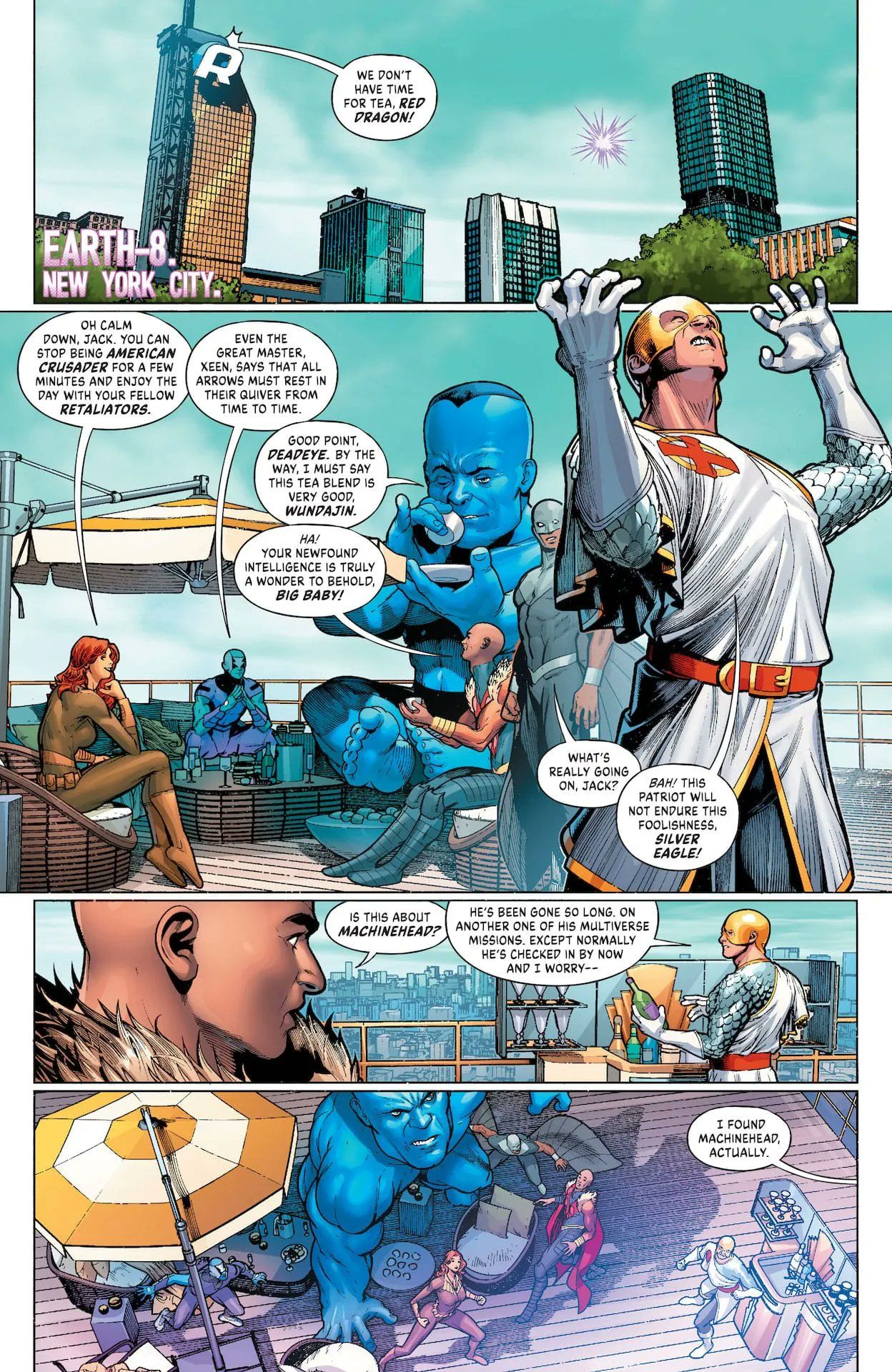 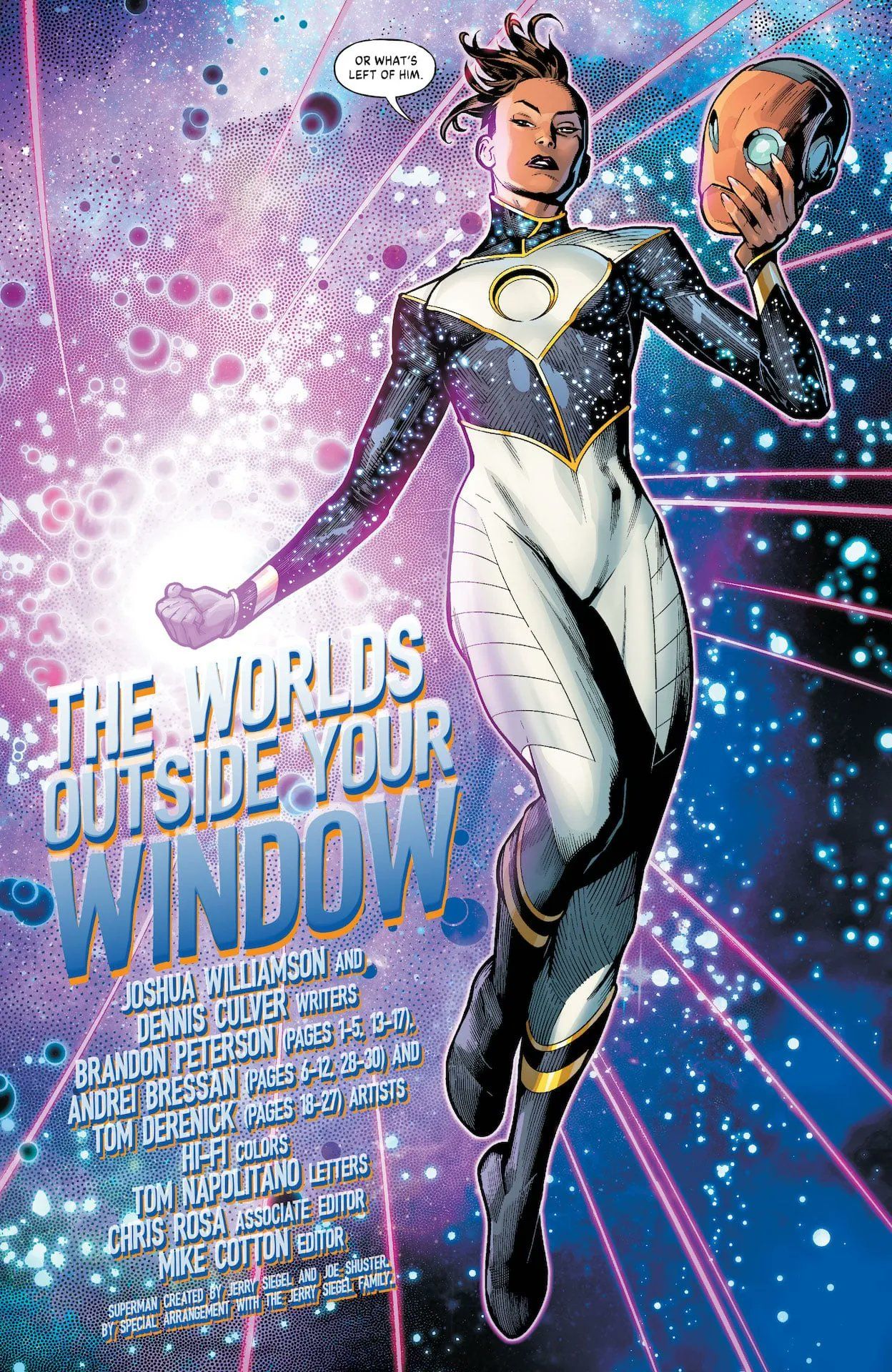 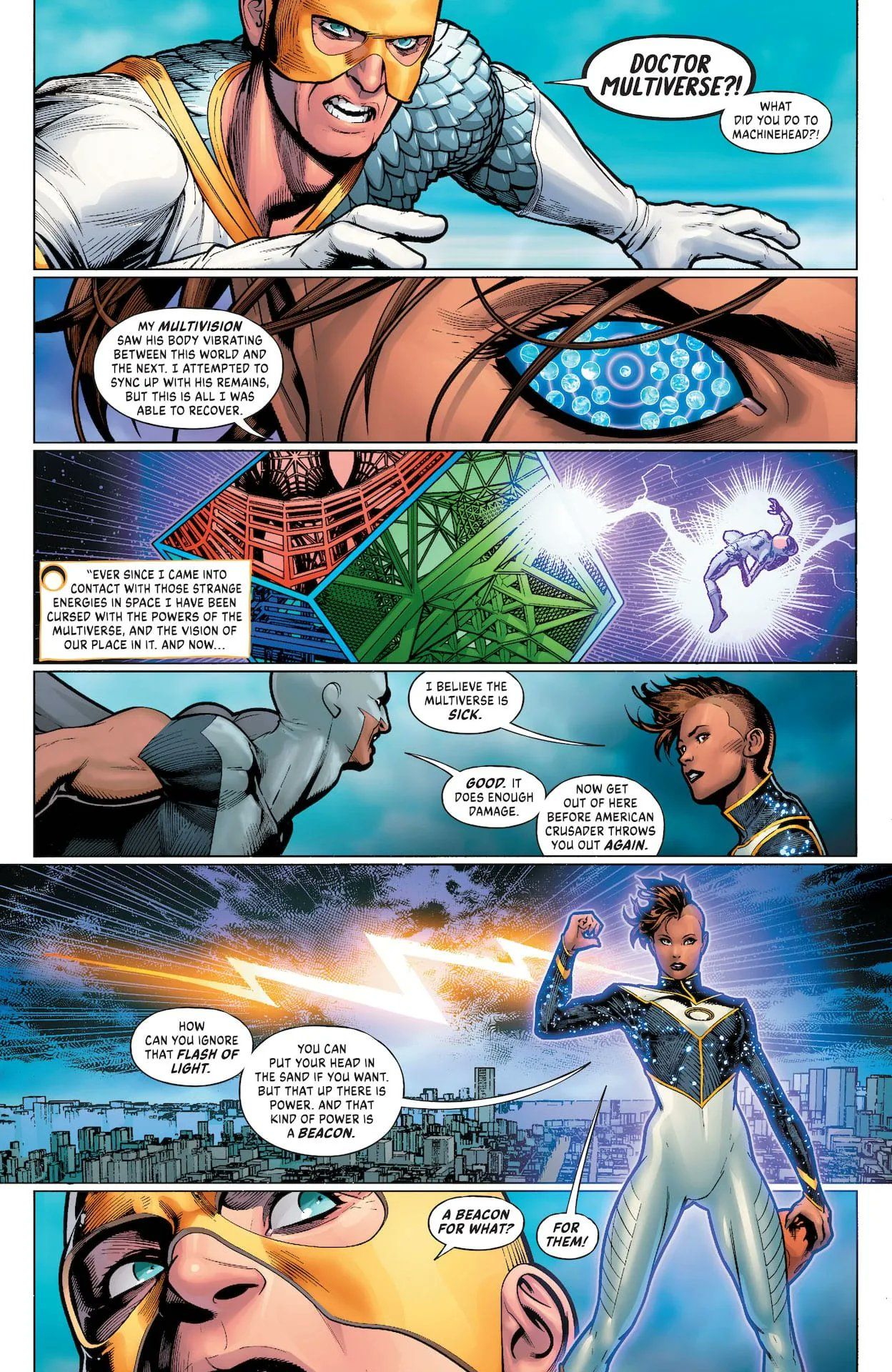 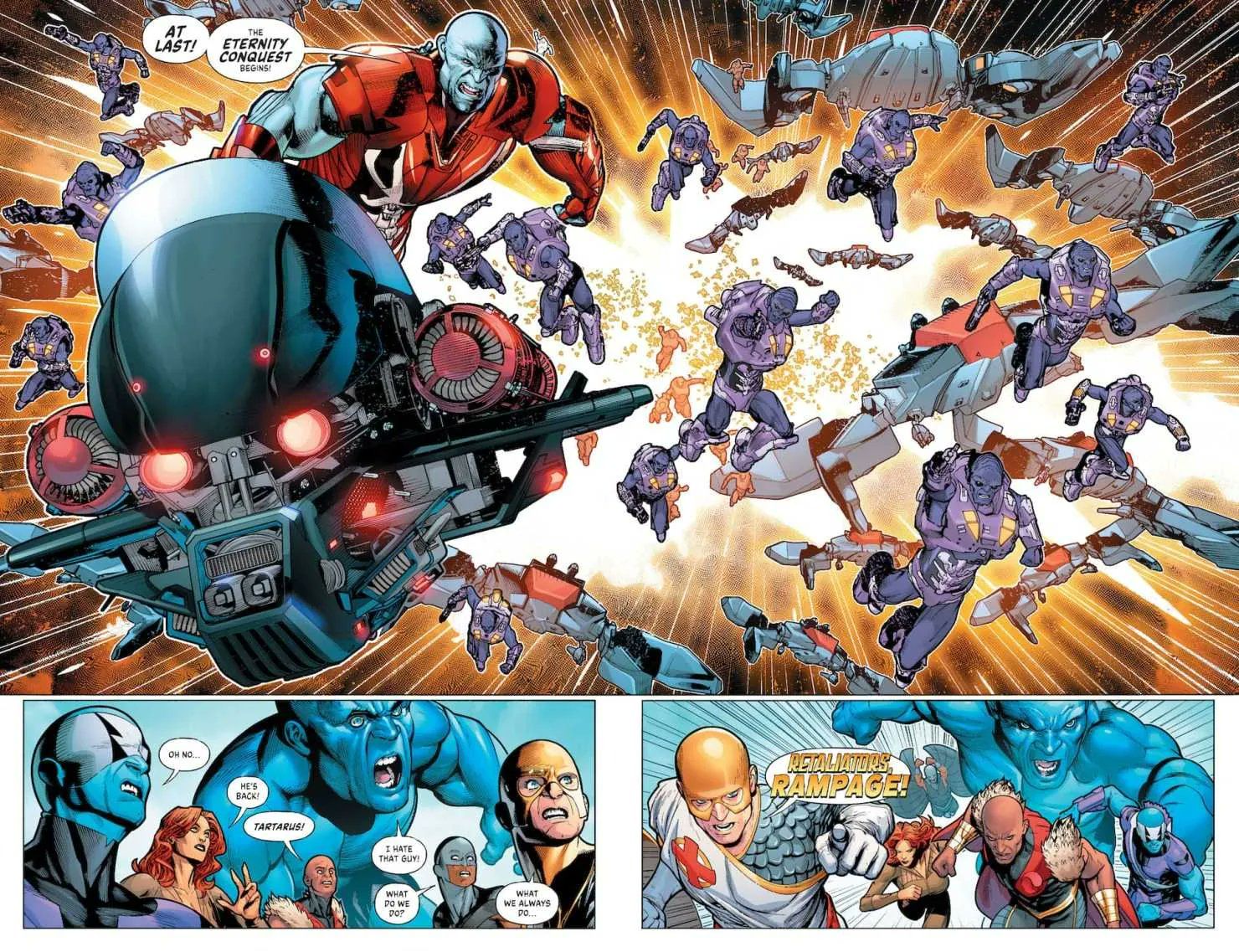 It is reasonable that Crusader might be wary, especially as Doctor Multiverse arrives on Earth 8 carrying the head of Crusader’s teammate, Machinehead. Apparently, Machinehead had fallen victim to some sort of fluctuation in the Multiverse and when Crusader told Doctor Multiverse to get lost, she explained that something like this would draw people looking for the power involved and sure enough, the Retaliators’ old foe, Tartarus (a Thanos riff) has shown up to try to take advantage of the power.

The Retaliators are forced to assemble, using their famous battle cry, “Retaliators Rampage!” How much more the Retaliators will be involved in the story of Justice League Incarnate #1 will only be revealed when the issue is released next week on November 30th.

Demon Slayer: Kimetsu no Yaiba Perfume Line Will Have You Smelling Like a Hashira