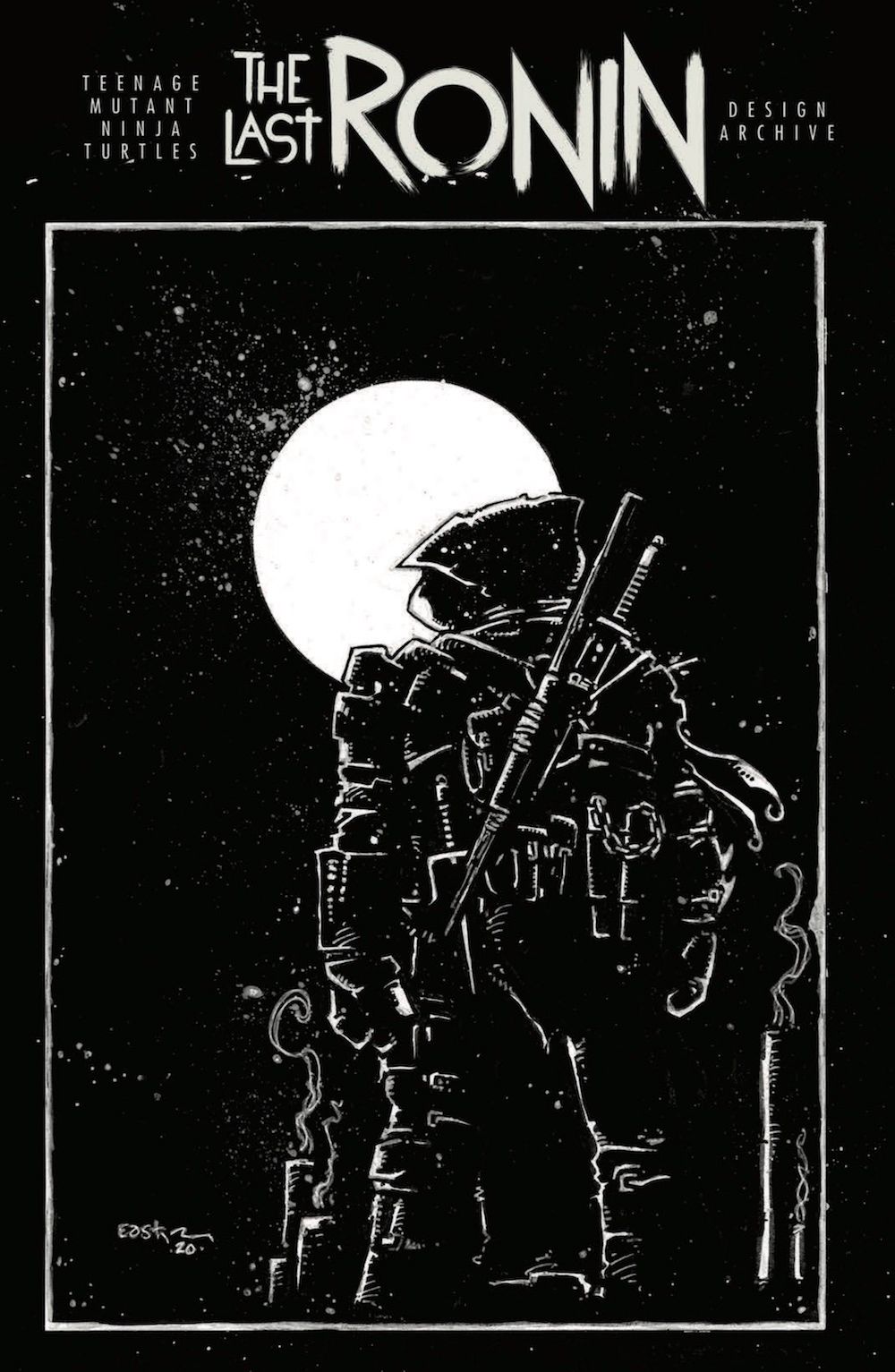 Teenage Mutant Ninja Turtles is iconic for its carefree but valorous adolescent heroes and their love of pizza, catchphrases, and action-packed adventures. But as seems to be the case with a lot of comics, growing up is hard. TMNT: The Last Ronin follows Michaelangelo, in the far future, as the only surviving member of the Ninja Turtles, on his near-impossible quest to avenge his fallen brothers. Carrying his signature nunchucks and the weapons of his brothers, Mikey is a shell of his former wisecracking self; however, memories of happier days are never far from his mind.

The TMNT faced many future timelines. Some times are almost as dark as The Last Ronin, while others are cheerful and chaotic. But each future scenario comes with its own take of the Turtles while staying true to their idealistic nature. For all its bleakness, The Last Ronin follows suit, and nowhere is this more apparent than in its conceptualization, as seen in TMNT: The Last Ronin Design Archive #1, which gives an intricate look at the artistry under the gritty shell of this dark series. 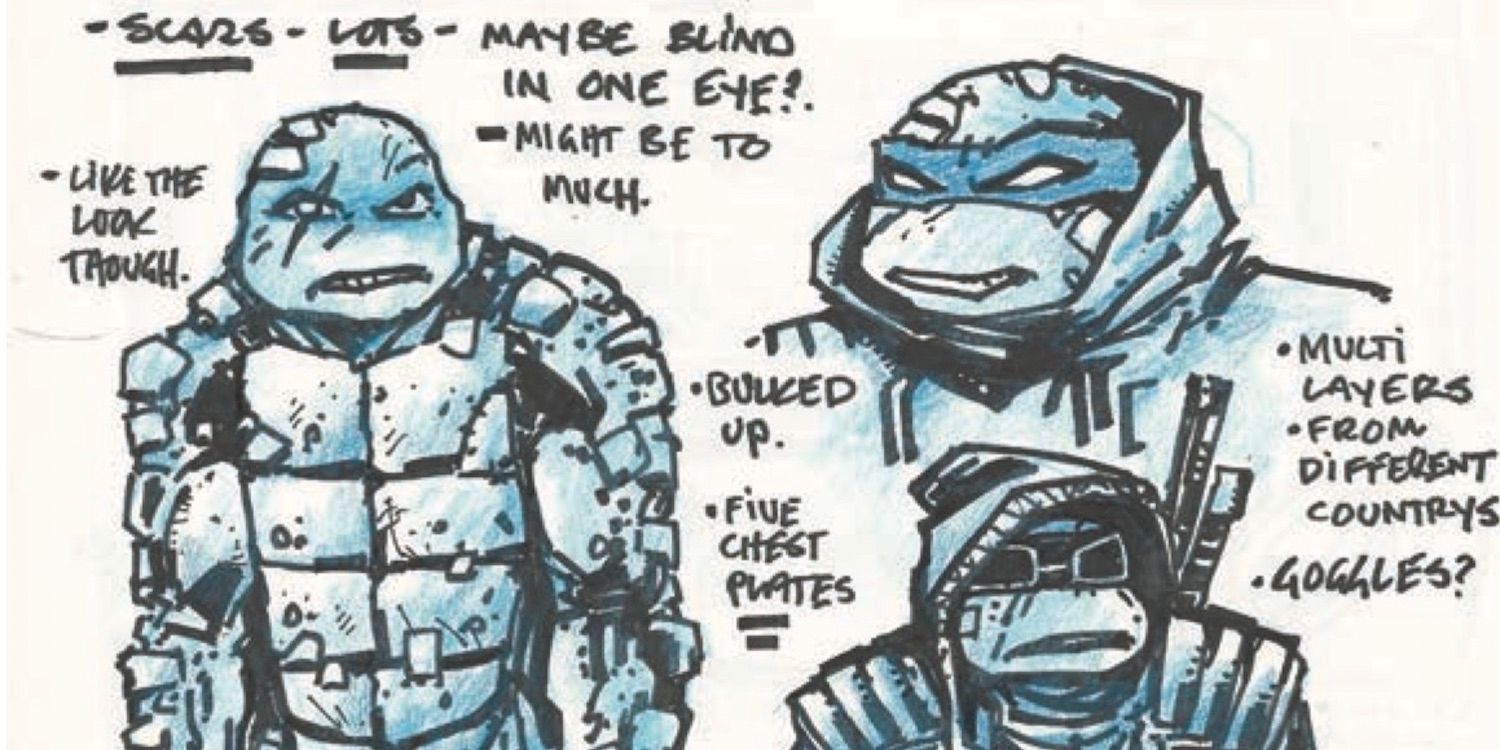 In the late 80s to early 90s, a trend emerged in comics that showed once-upbeat heroes in a colorful world turning into embittered old men in a dystopic future. Tropes such as militant police states, corrupt leaders, and tortured antiheroes are all present in TMNT: The Last Ronin. In lesser hands, the story could have come across as clichéd. However, the idealistic core of Teenage Mutant Ninja Turtles, courtesy of creators Kevin Eastman and John Laird, shines through and gives this dark series depth.

TMNT: The Last Ronin Design Archive #1 gives just a taste of the breadth of Eastman’s and Laird’s vision for the series. Although The Last Ronin reads like a spiritual antithesis to the original series, the design archives reveal how the mythos prevails. The Last Ronin started life as a short 20-page story by Eastman and Laird decades ago, and only recently has it been brought to fruition as a full, rich series. TMNT : The Last Ronin Design Archives #1 gives a glimpse into how Eastman, Laird, and their team of artists transformed recognizable characters into their older, post-apocalyptic counterparts. It also shows how they turned the colorful, mutant-filled metropolis of New York City into a harsh but compelling dystopia under the rulership of the Foot Clan.

Related: Teenage Mutant Ninja Turtles Reveals the One Thing the TMNT Can’t Do

Given that The Last Ronin’s concept began in 1987, Eastman, Laird, and their team of artists have had plenty of time to develop this dark tale. In the immediate wake of the Turtles’ success, the creative team pushed aside this 20-page short. So it is only fitting that the early drafts and designs of The Last Ronin reflect the aesthetic of the early Turtles, then still untouched by the ownership of IDW and Viacom. There is an element of whimsy and humor in the scratchy designs of Hiroto’s secret lair, the Cyberpunk renderings of New York City,  Casey Jones’ 80s-tastic big hair, and the design of the last Ronin. Different variations of future Mikey’s design include notes about everything from his costume, his number of scars, his expressions, and even the addition of barnacles on his shell–mutant or not. They also reveal Laird and Eastman’s thought processes — including whether or not Mikey being blind in one eye was a bit too much.

Despite its depressing storyline, The Last Ronin at its core reflects the heart of the Teenage Mutant Ninja Turtles. Mikey, despite the scars and sneering, is still a hero. In TMNT: The Last Ronin Design Archives #1, that original vision is visible in its raw, authentic, and sincere sketches. Thirty-four years later, The Teenage Mutant Ninja Turtles lives on and continues to grow up. TMNT: The Last Ronin Design Archives #1 gives a candid look at a franchise still in its infancy, mulling over its possible future.