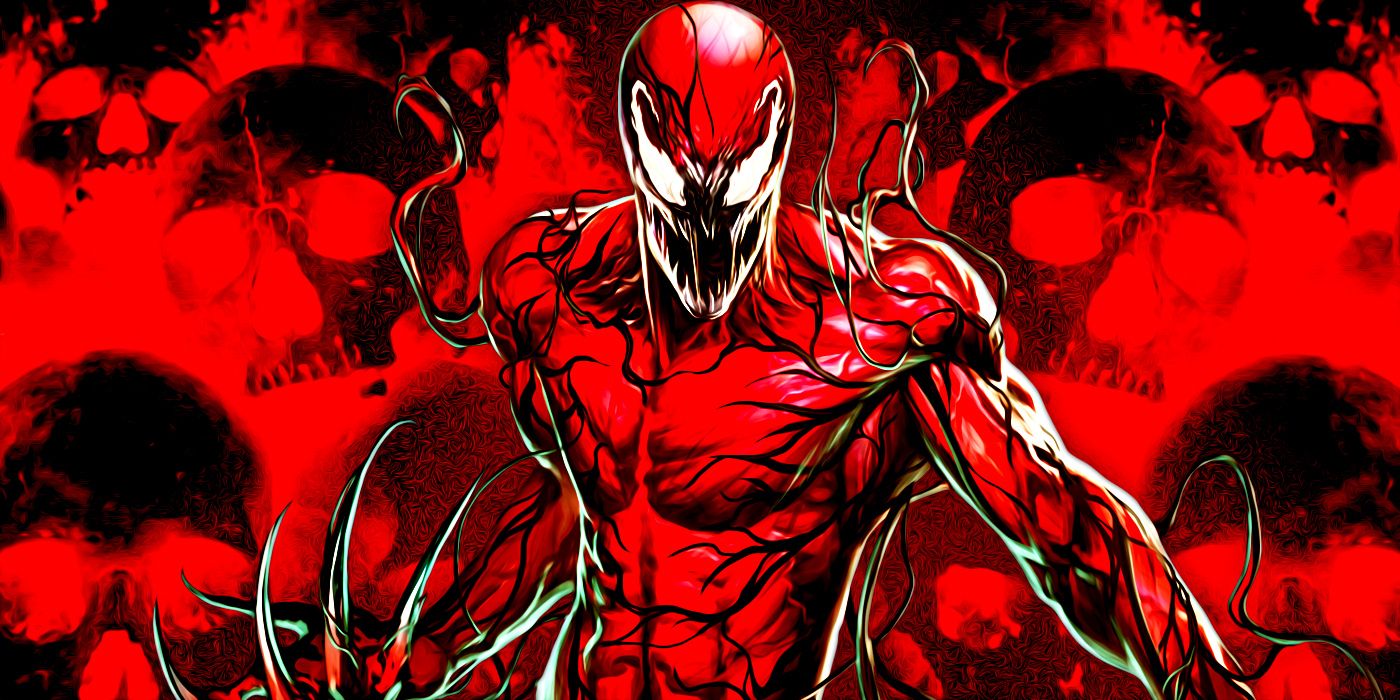 Ever since ascending to the throne of King in Black, Eddie Brock has been more powerful than ever. Unfortunately, he isn’t the only symbiote to have gone through such a remarkable transformation. Carnage has also clawed his way to the top of the food chain, at least in the world of politics. Not only has the vile symbiote managed to worm his way onto the senate floor, but he has also made a home for himself in the hearts and minds of people all across the country, as seen in Venom #2 (by Ram V, Bryan Hitch, Andrew Currie, Alex Sinclair, and VC’s Clayton Cowles).

In the months since Knull’s invasion of the Marvel Universe ended, humanity has lived alongside a number of symbiotes who were left stranded on Earth. While Eddie Brock has done everything he can to help as the King in Black, the subsequent attack by Carnage and his Life Foundation brethren has left the general populace in fear of his kind. Like his father before him, Arthur Krane has gone on to use his place in the political sphere to stoke those fears, drumming up support for his own impending congressional bid on the back of an anti-alien platform. With the world watching, Krane gives a rousing speech, announcing his new mission to tackle the symbiote threat on. If there is anyone who knows the situation at hand best, it is certainly Arthur Krane, especially since he is now secretly the host of the Carnage symbiote. 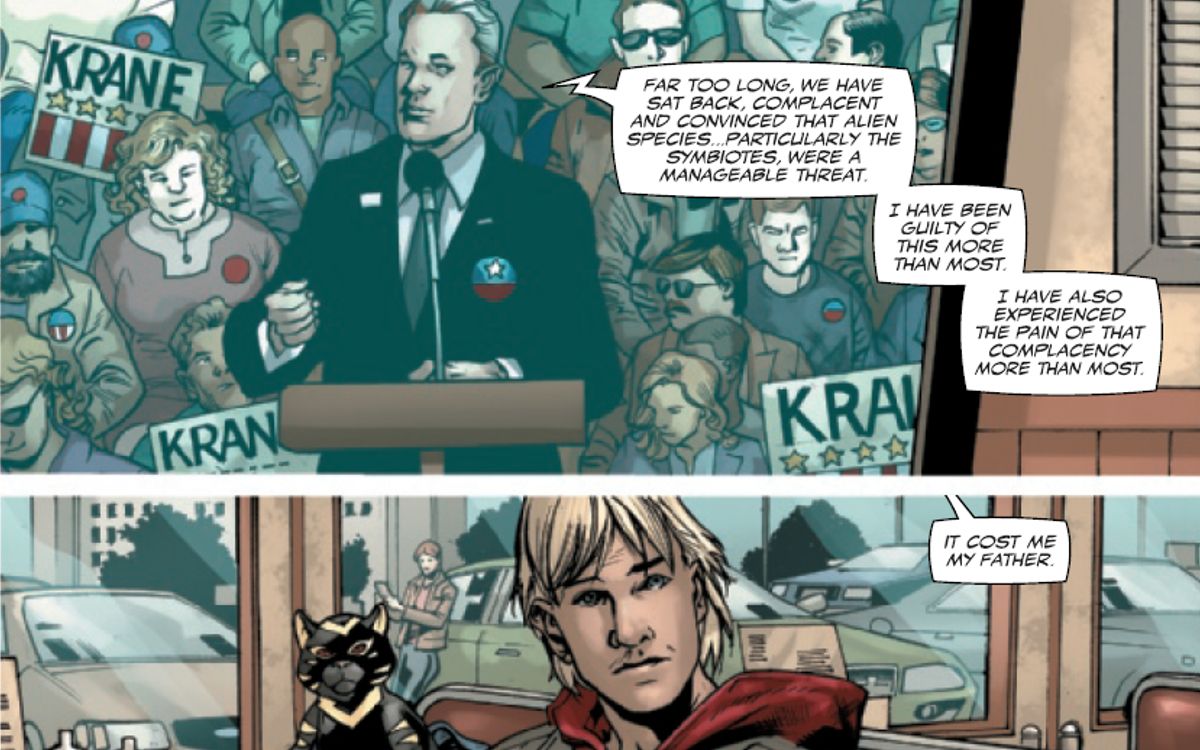 It may seem counterintuitive for Carnage to be leading a movement against his own kind, but all of this is working out better than he could have ever hoped. From this vantage point, the evil symbiote is able to coordinate his efforts however he sees fit, sending harm Venom’s way while allowing his agents to operate unnoticed.

Carnage has also managed to make powerful new allies who share his values. He has already worked closely with the scientists at Alchemax, although those particular endeavors were sidelined by Flash Thompson and his symbiote allies. The Life Foundation has also taken notice of Krane, and the organization has offered their support in the war against the symbiotes. With so many resources at his disposal, it seems like there is no end to Carnage’s reach. 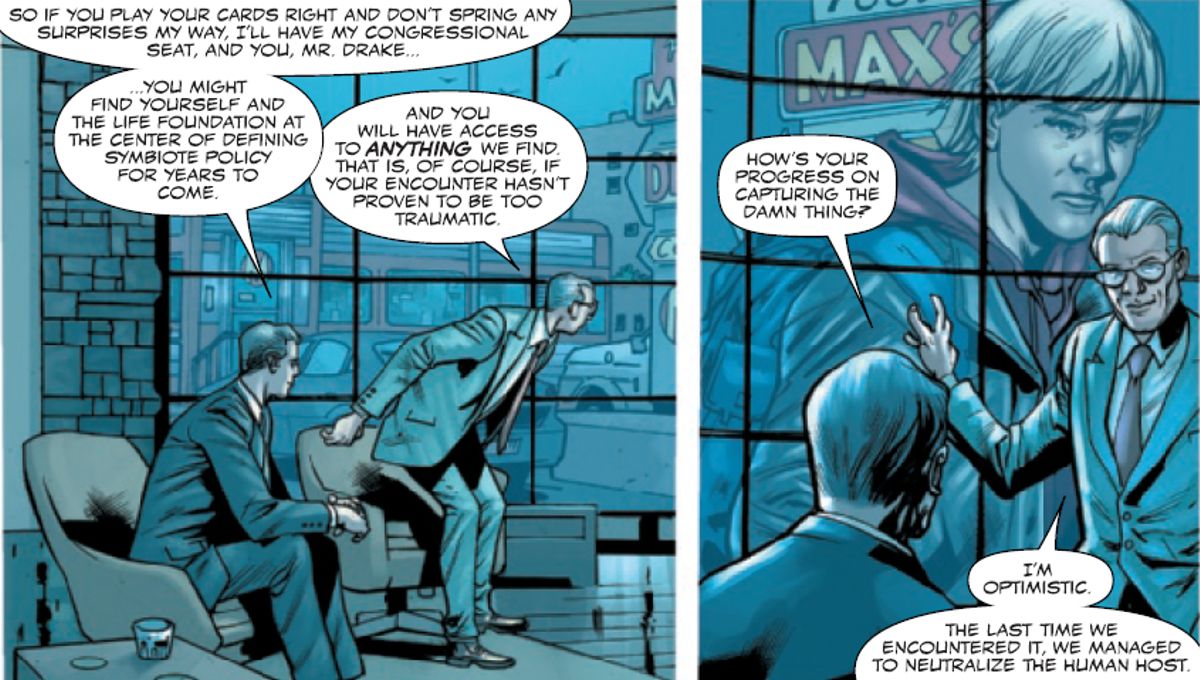 Carnage isn’t the first Marvel villain to turn to politics when they needed to get a leg up on the competition. Norman Osborn and Wilson Fisk have both made names for themselves in the political arena, with Fisk still acting as the mayor of New York City.

Considering how far he has come already, there is little chance of Carnage’s master scheme being undermined, at least until he makes his move. With so many other organizations now working under his purview, Arthur Krane might not have to drop his family friendly image at all, leaving the Carnage symbiote free to wreak havoc as he pleases.