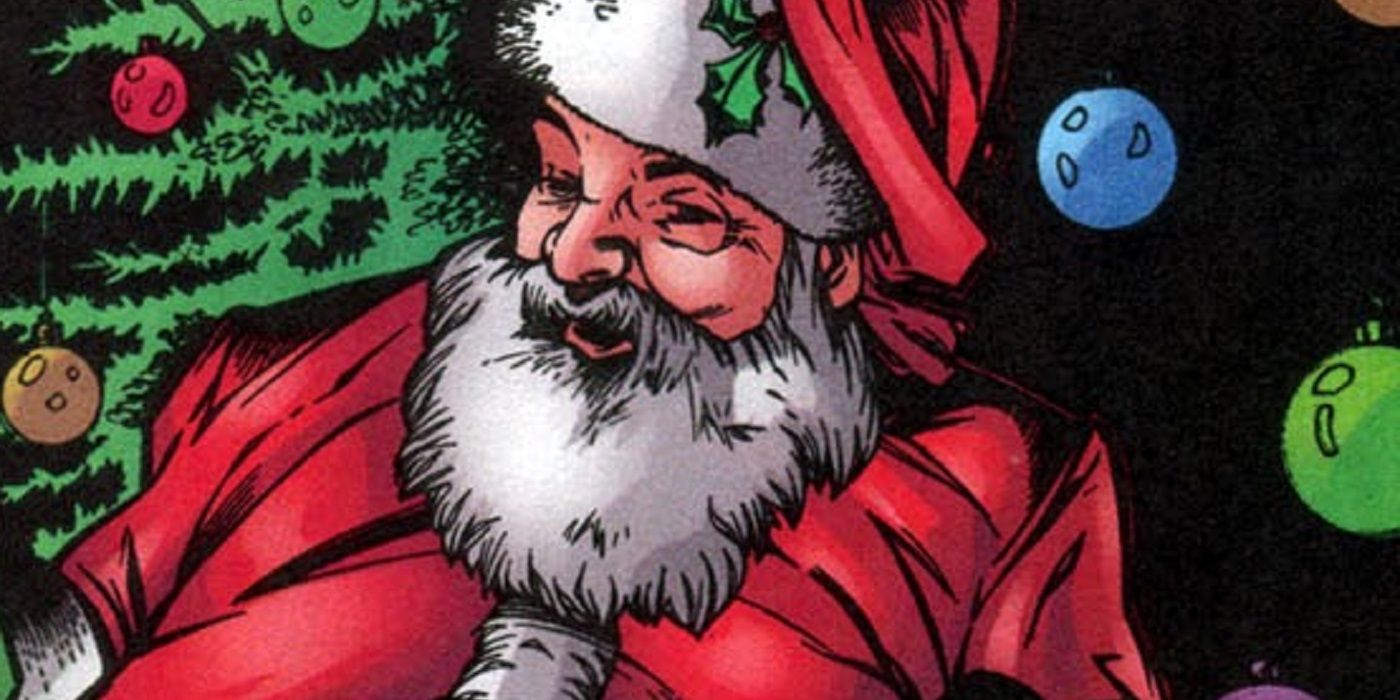 Today, we look at a pair of 1990s X-Men comics that tied into Santa Claus being a mutant!

And now, a bit late, Day 11 will be opened (once opened, the door will feature a panel from the featured story)… 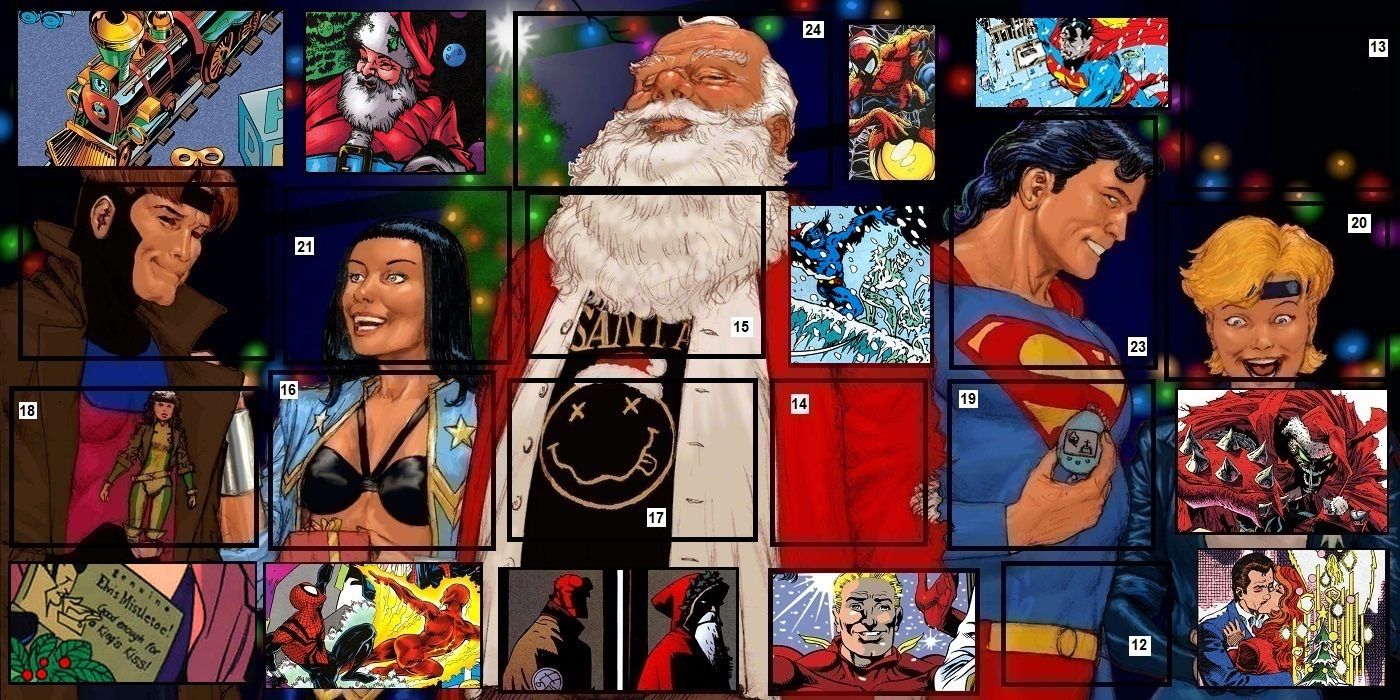 Today, we look at 1991’s “A Miracle a Few Blocks down from 34th Street” by Scott Lobdell, Dave Cockrum and Joe Rubinstein from Marvel’s 1991 Holiday Special and 1999’s “Yes, Jubilee, There is a Santa Claus” by Joe Harris, Adam Pollina and Mark Morales (plus a bunch of other inkers) from Generation X Holiday Special #1.

First off, we have “A Miracle a Few Blocks down from 34th Street,” the opening story of Marvel’s first 1990s Holiday Specials, which was written by Scott Lobdell before he became the regular writer on Uncanny X-Men and drawn by Dave Cockrum and Joe Rubinstein long after they STOPPED being the regular artists on Uncanny X-Men. This is one of the very last X-Men stories ever to be drawn by the late, great Cockrum (it was colored by his wife, Paty, which is a nice touch for one of his last X-Men stories).

Anyhow, the story opens with the X-Men trimming the Christmas tree at the X-Mansion… 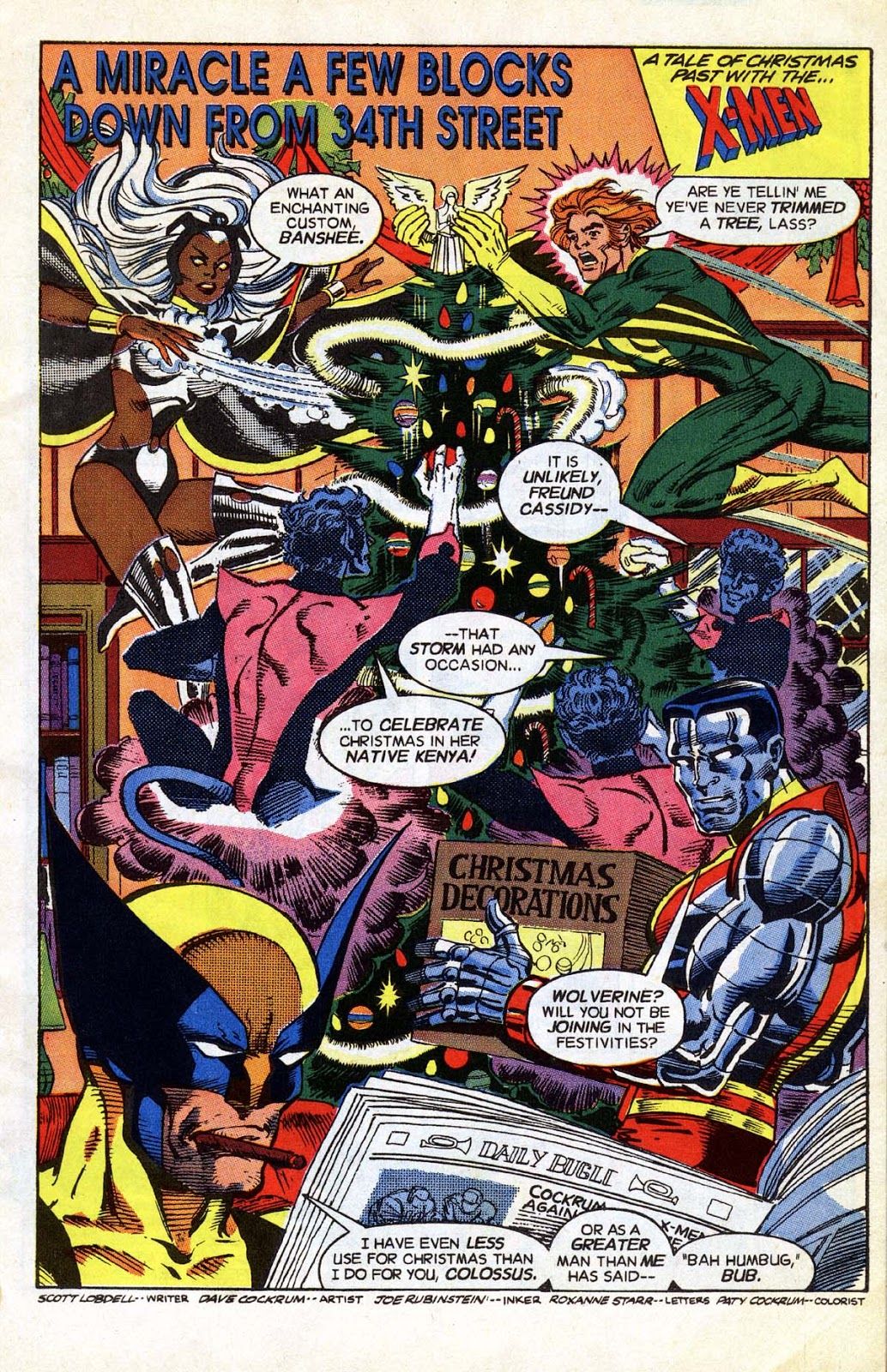 Suddenly, they’re called to action when a powerful mutant seems to show up at a department store. This used to be a thing that happened in X-Men comic books a lot (Cerebro discovers a new mutant and the X-Men investigate), but really hasn’t happened for a long time. In any event, the X-Men head to the department store to check it out and run into the Brotherhood of Evil Mutants, who are also looking for that same mutant! 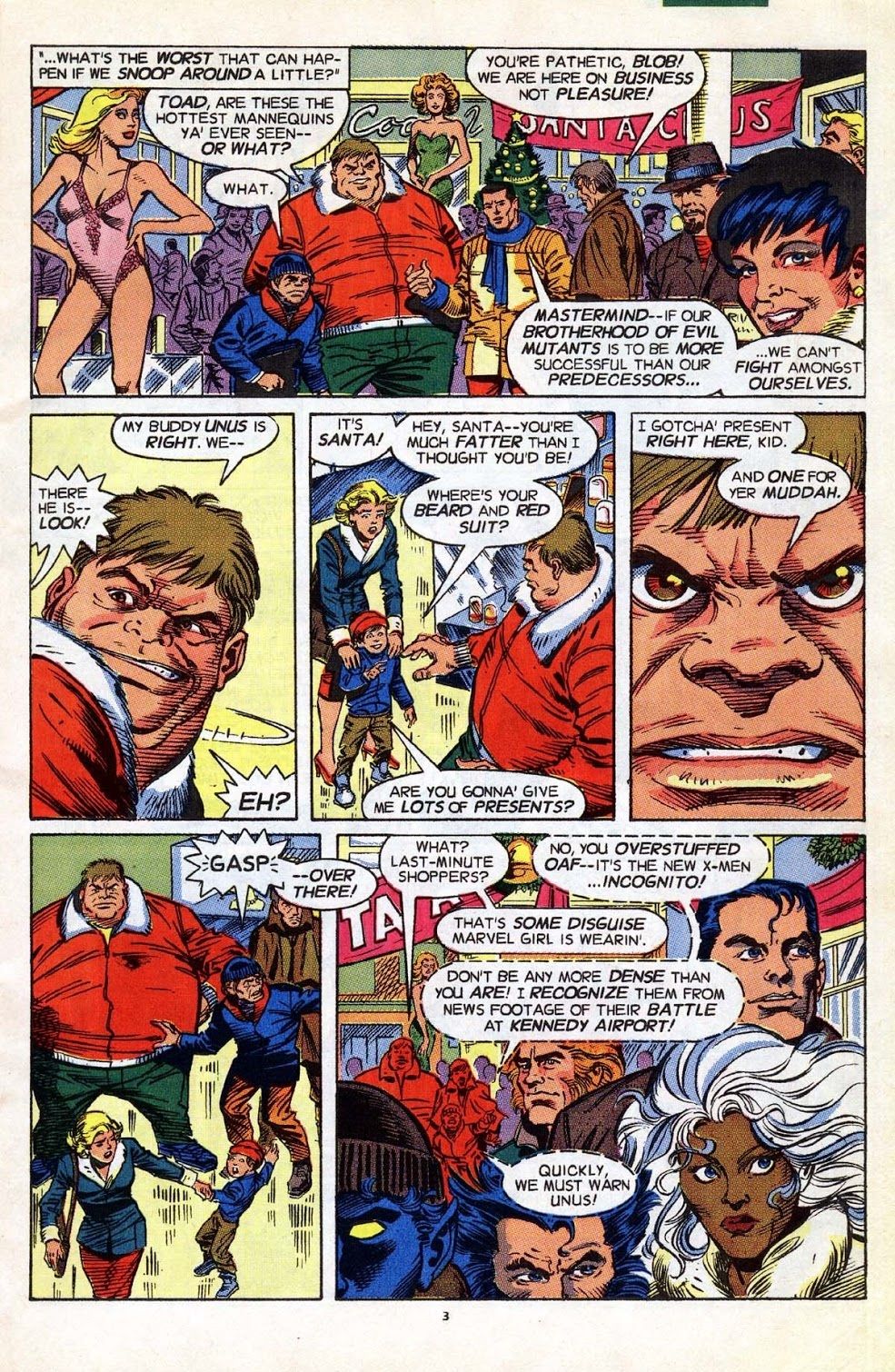 The heroes fight against the villains for a little bit… 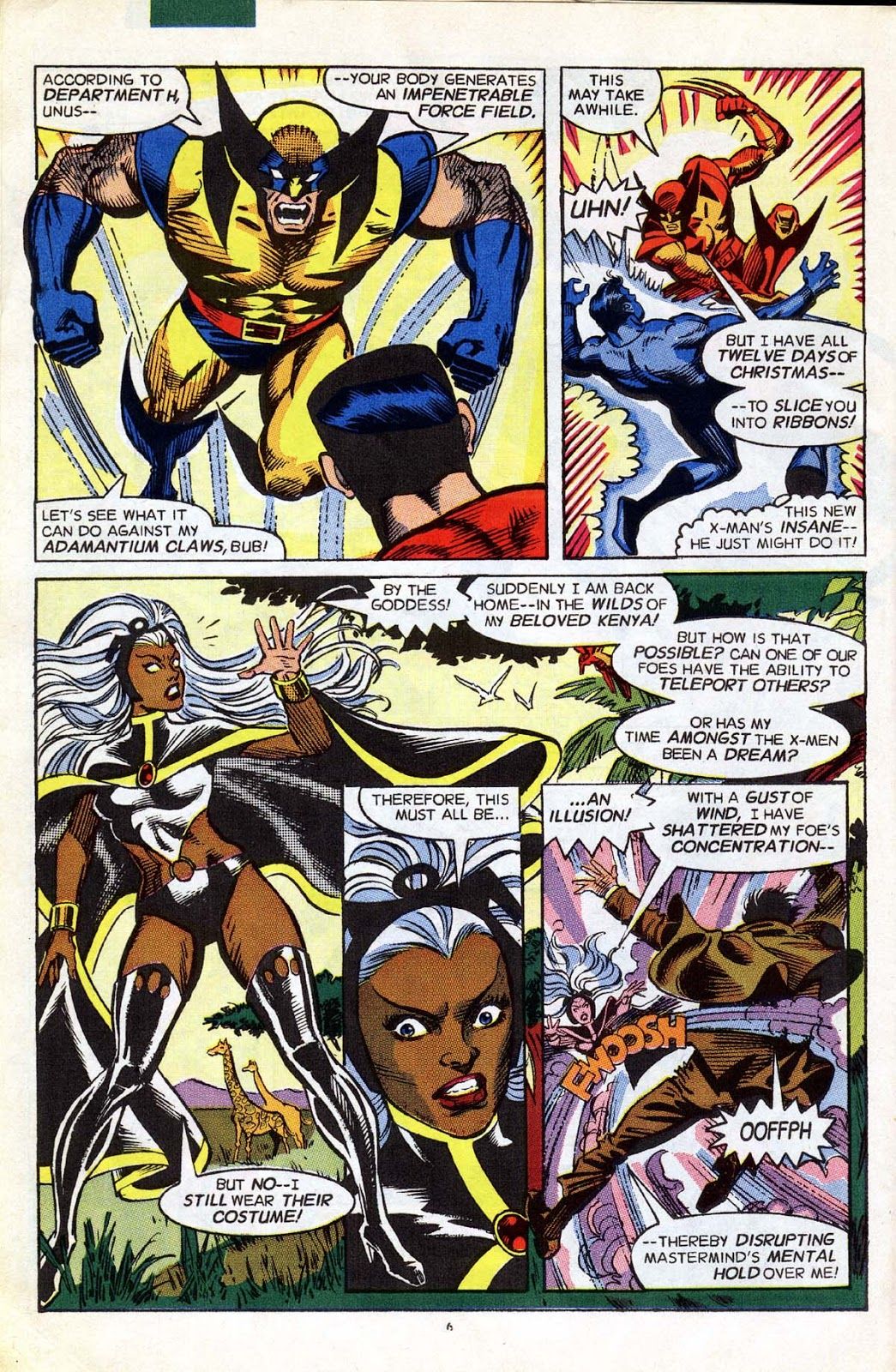 But then, suddenly, the evil mutants are transformed into action figures by…Santa Claus? What the what? 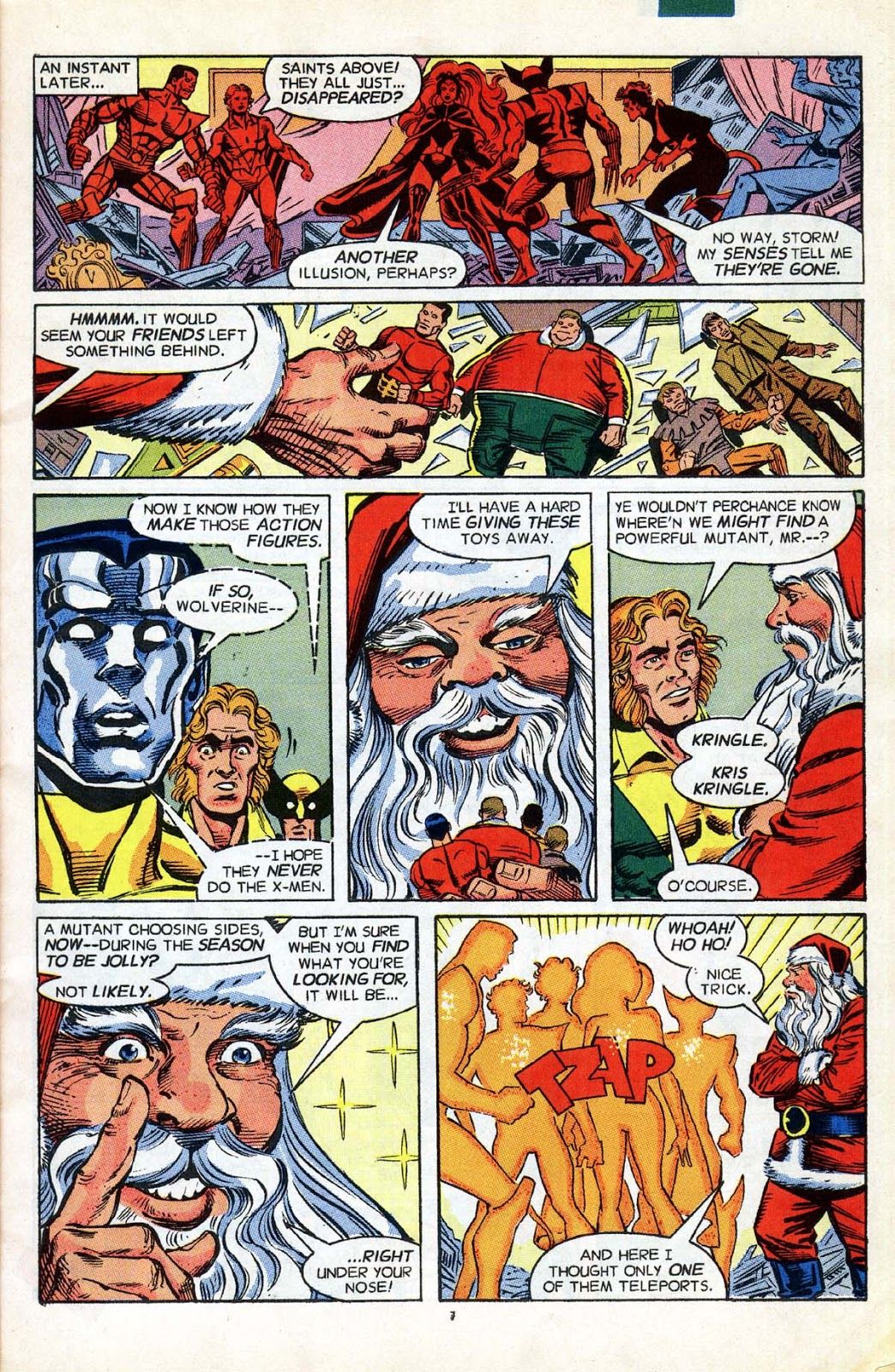 “Santa” then wipes out the memories of the X-Men of what they just saw and then transports them to Rockefeller Center, which, of course, sets them up for where they were when X-Men #98 began, one of the more memorable Christmases for the X-Men in their history (since it ended with Jean Grey seemingly dying and coming back as the Phoenix)…. 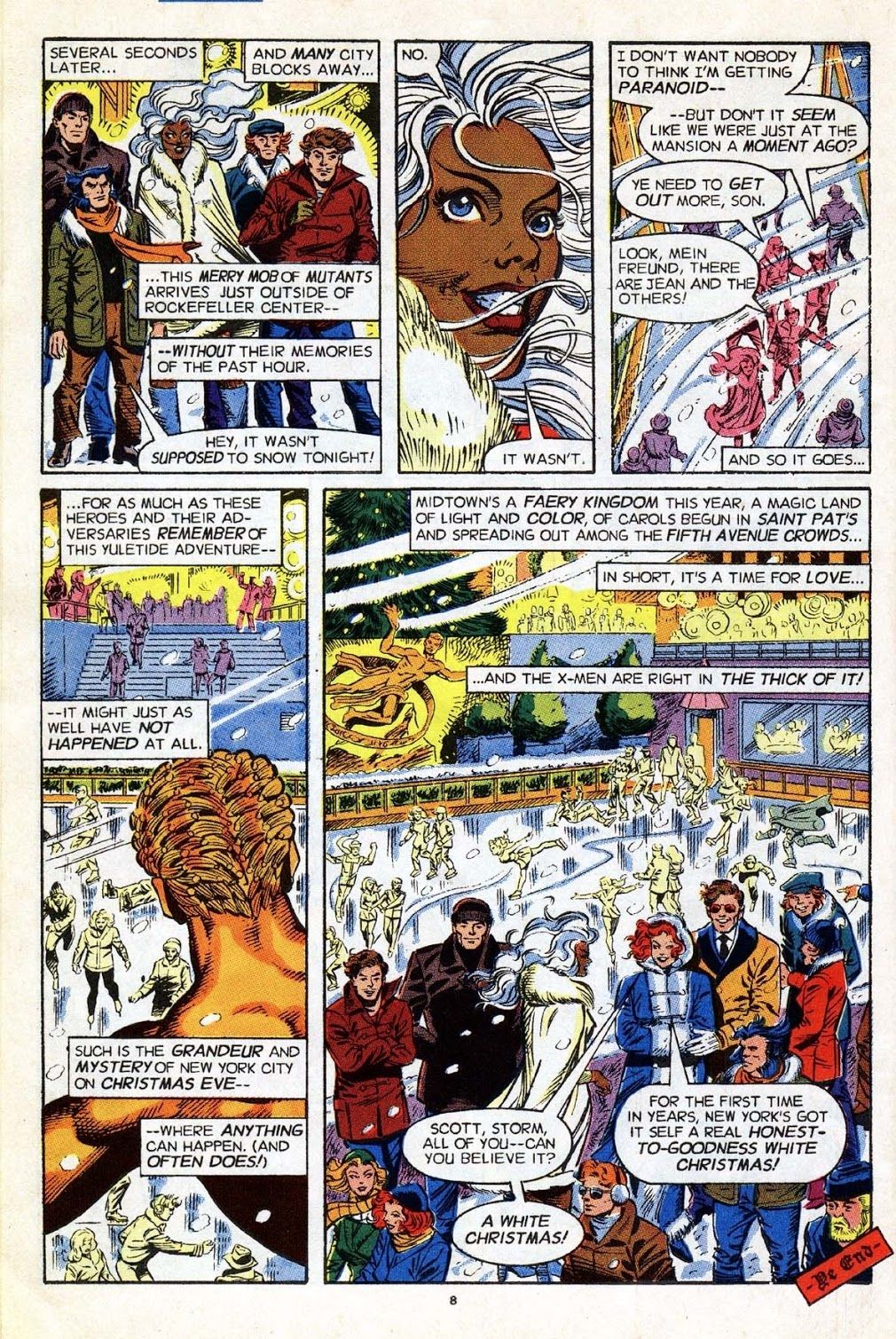 This was a clever story by Scott Lobdell and featured some great artwork by Cockrum that managed to both fit in with the style of the past while showing some of the evolution of his artwork in the ensuing decades (his Wolverine, for instance, seems to be a lot more modern in appearance than it used to be). Lobdell was best known for his humorous work at the time (he has a funny Captain Ultra story later in this very holiday collection), so it was nice to see something with a bit more heft to it. This was a heck of a way to launch Marvel’s first Holiday Special and started a really nice tradition that lasted for the next few years.

This was at the start of the decade, but it’s sort of follow-up occurred at the END of the decade, in a Christmas issue with the Generation X gang (these were the next generation of mutant students, as Xavier’s had stopped being a school quite a while back and so Emma Frost and Sean Cassidy open up a new school for mutants and Jubilee, the young mutant who had become Wolverine’s sort-of sidekick, was the most notable member of the first class of mutants, but the other mutants included Synch, Skin, M and Husk).

The Generation X Holiday Special served as a sequel to the first Generation X Christmas issue (Generation X somehow had four Christmas celebrations in seven years. X-Force never had a single Christmas story in the 1990s!). In that story, the team fought against the Orphan-Maker, the child operative of the villainous Nanny, who uses the Orphan-Maker to kill the parents of mutant children so that Nanny can raise them herself. The Orphan-Maker has a powerful suit of armor, but is still just a kid himself.

Orphan-Maker comes for a mutant child, but accidentally takes one of the mutant kid’s human bullies instead. Generation X fights the Orphan-Maker while Jubilee goes after the young mutant and is shocked to discover that the mutant kid has somehow used his powers to take Santa Claus hostage!! 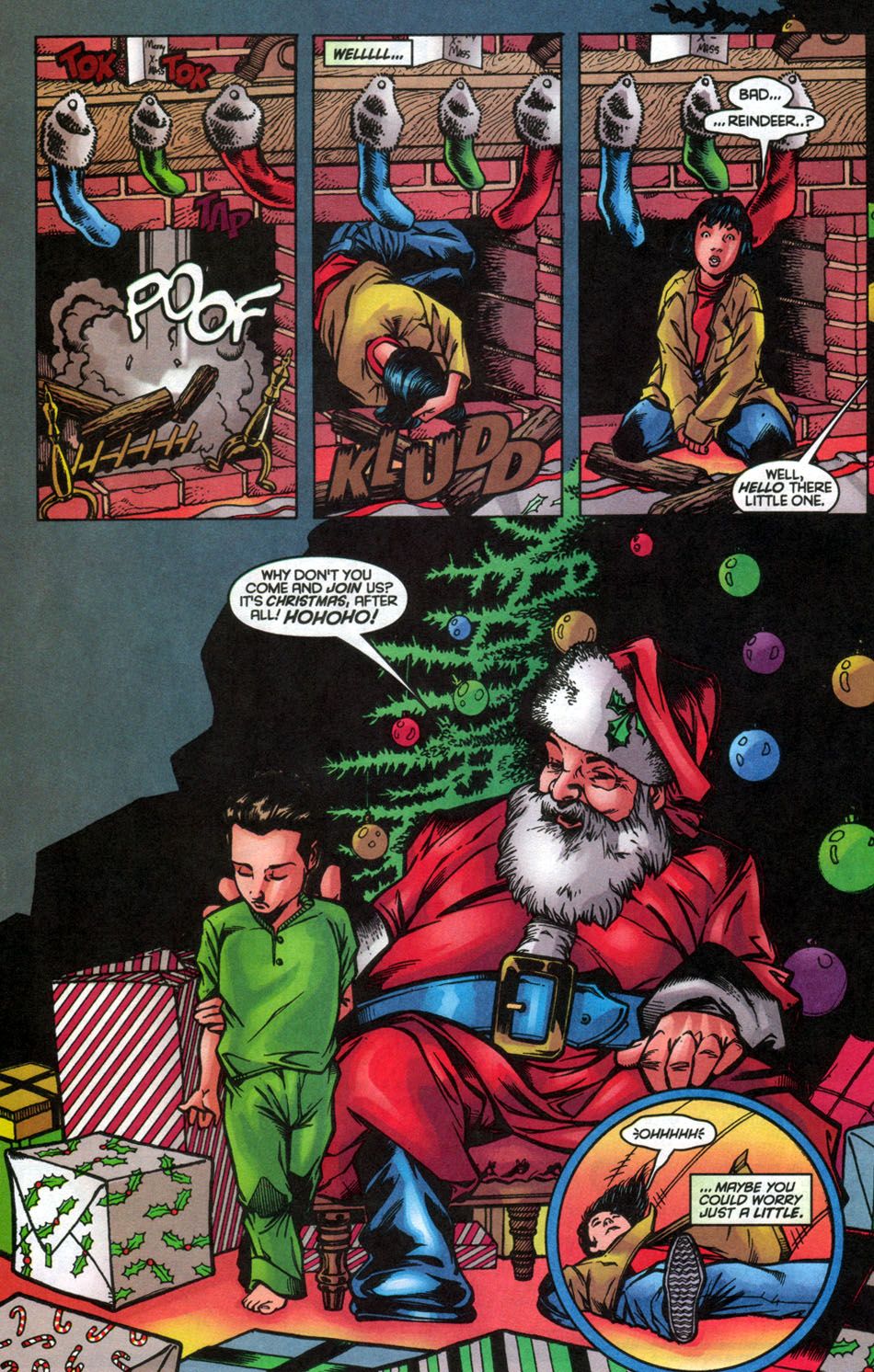 The Orphan-Maker shows up, but, of course, being a kid, he has a funny reaction to meeting the actual Santa Claus… 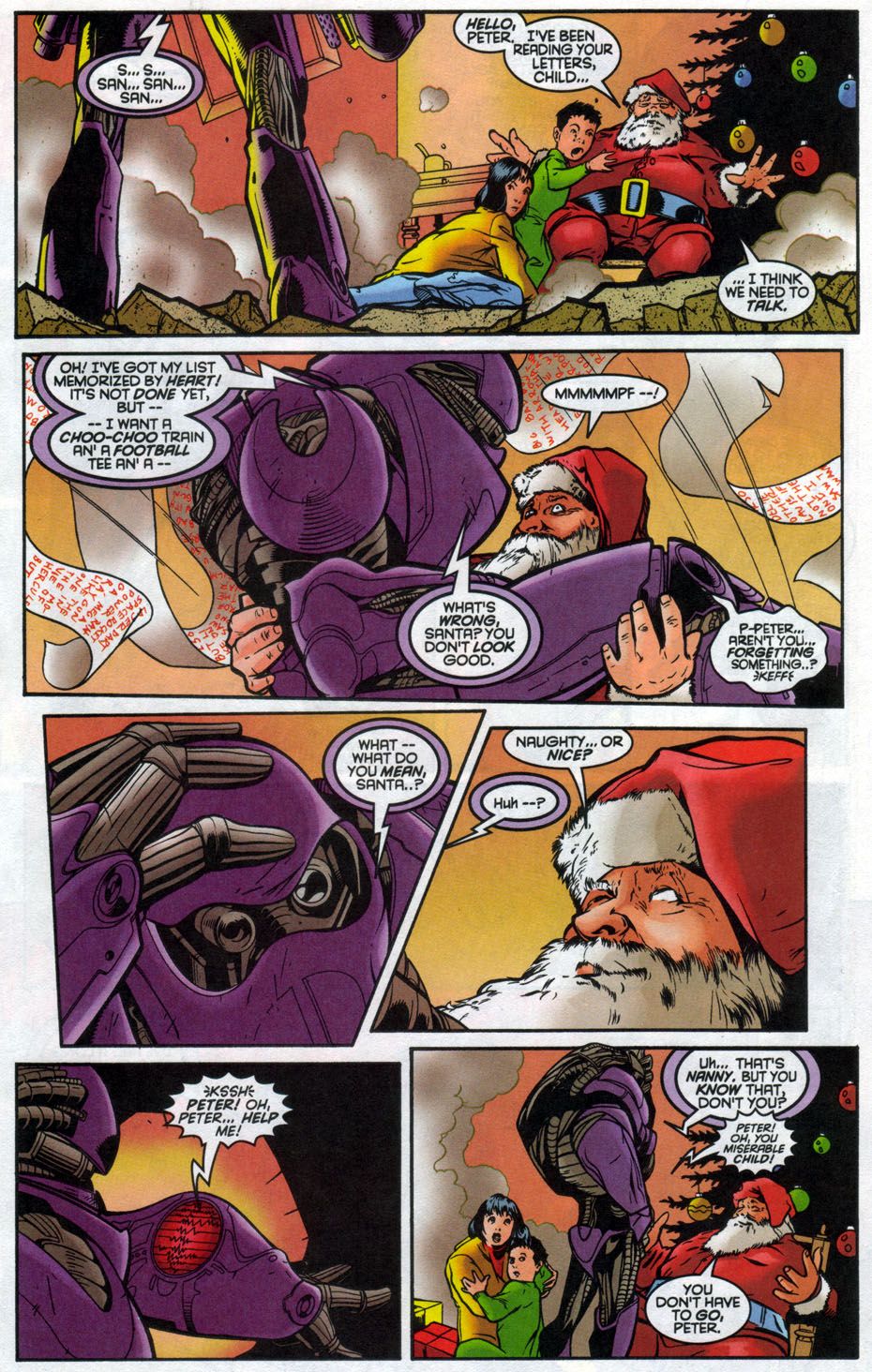 And Santa Claus, of course, takes advantage of that fact… 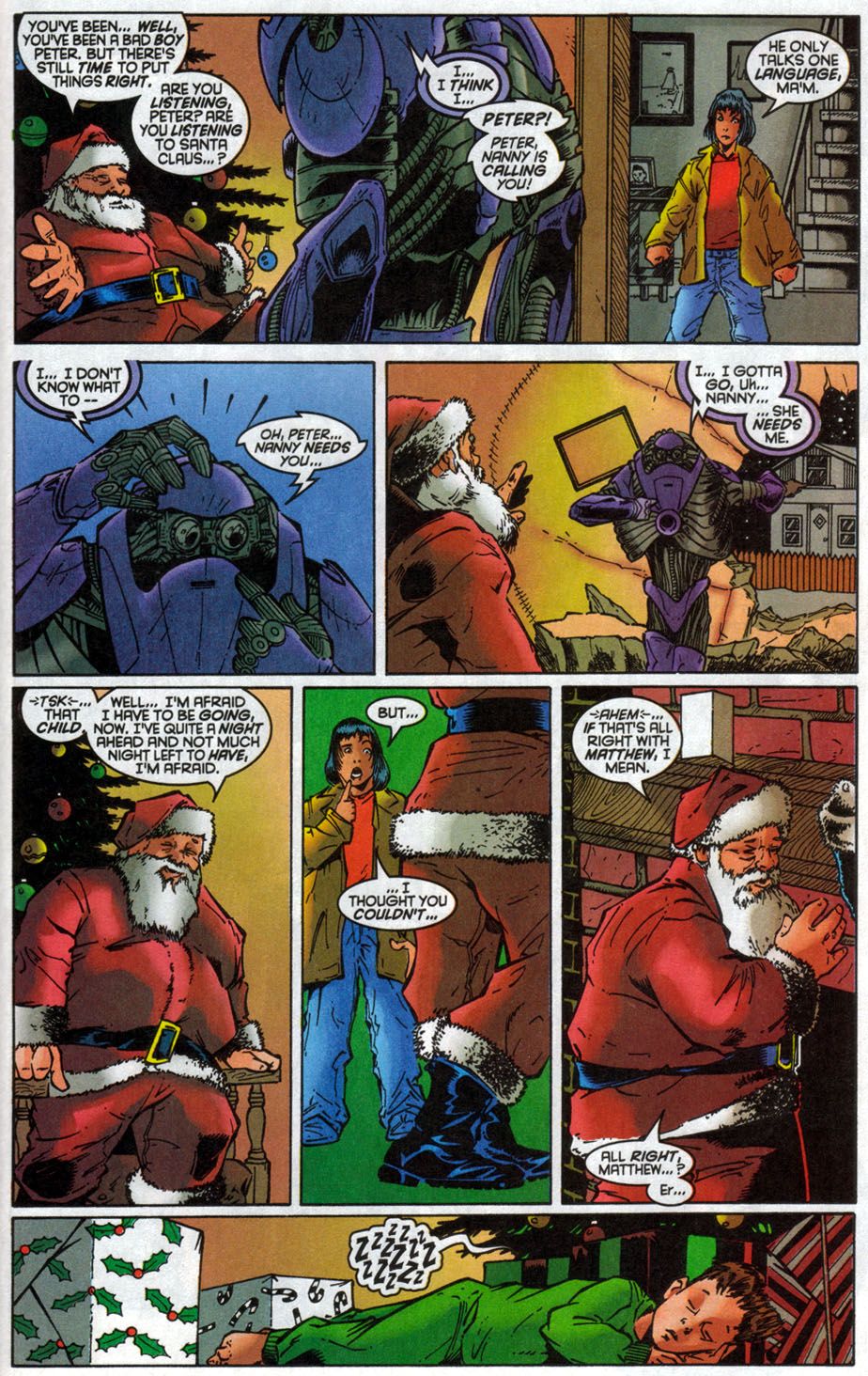 In the end, after Orphan-Maker leaves, we see that Santa Claus is actually a mutant!! 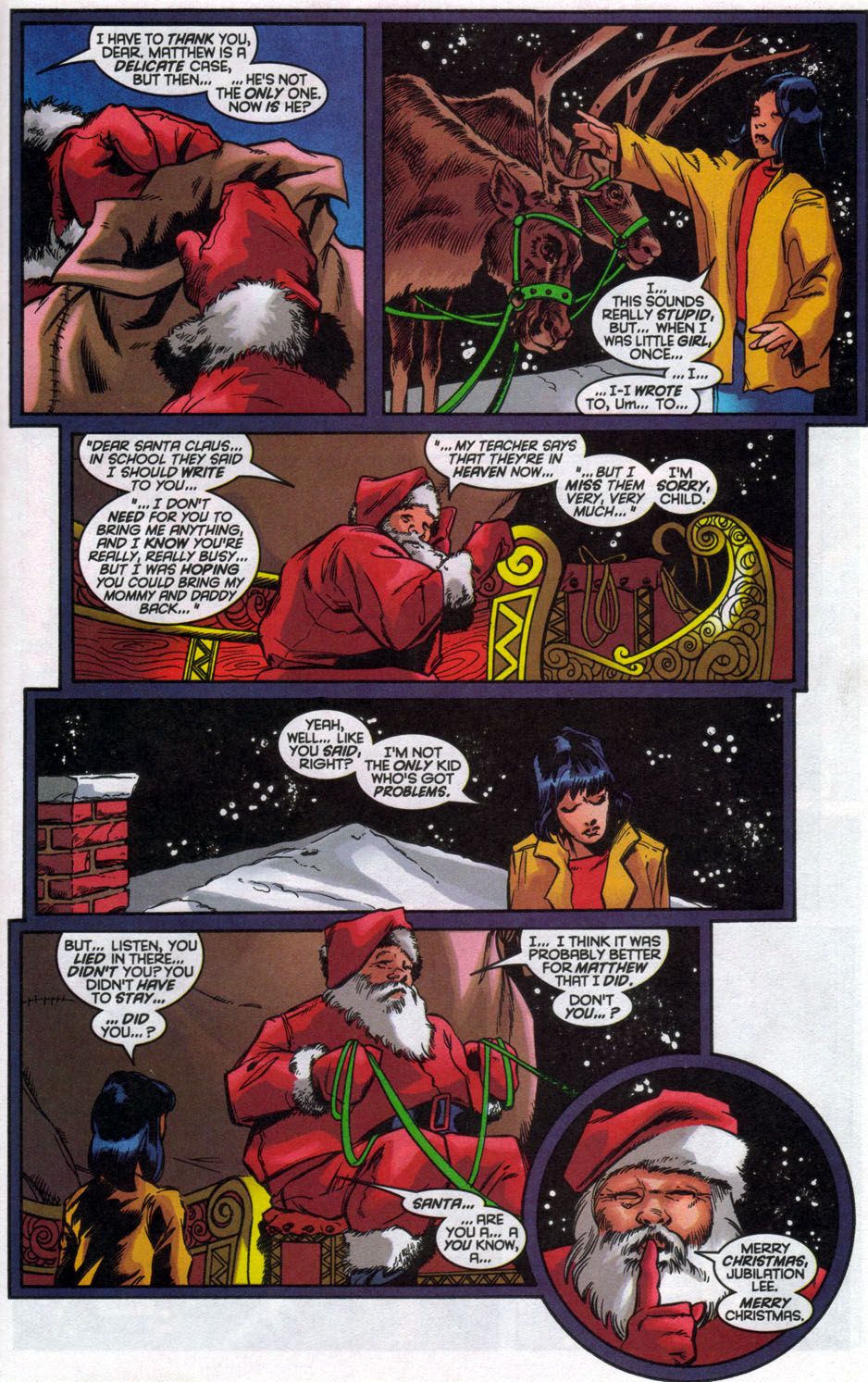 Yes, while the earlier 1991 comic book sure seemed to make it clear that Santa Claus was a mutant, there was still a bit of distance between it being the “real” Santa or not, so there was some vagueness as to whether Santa Claus was legitimately a mutant. In this case, though, they REALLY leaned into it this not just being the real Santa Claus, but also that Santa Claus is definitely a mutant. It ends with Jubilee getting a doll from Santa and her having a happy celebration of the holiday with her friends. Jubilee’s orphan status doesn’t come up a LOT, but this story used it well.