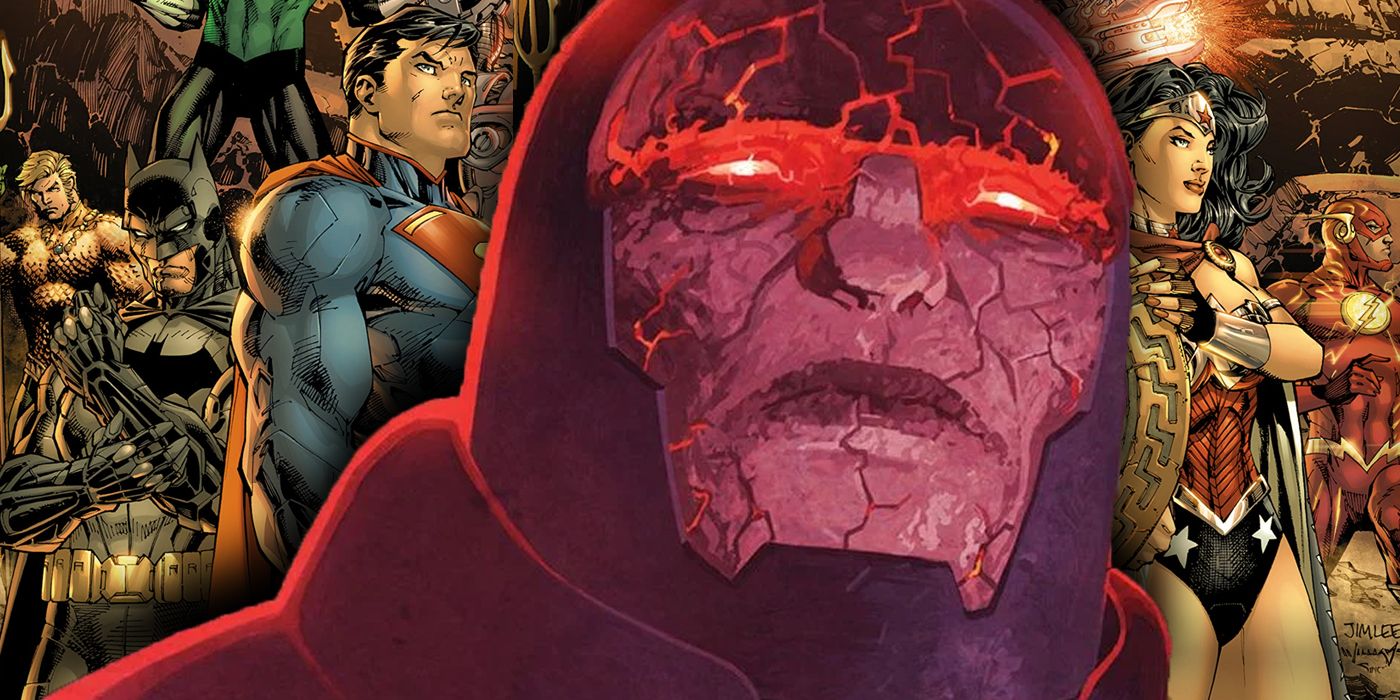 Darkseid has always been set up as the ultimate evil in the DC Universe – even the DC Multiverse. Countless iterations of the Lord of Apokolips have been seen both in the comics and in other mediums as the ultimate enemy for good to triumph over and, sometimes, the forces of good don’t win. Now, thanks to Infinite Frontier, Darkseid is stronger than ever. However, a new foe has emerged from the DC Animated Universe that is a way bigger threat than the infamous New God and it’s actually his most powerful weapon.

The DCAU’s Justice League and Earth-D’s Justice Alliance find the heart of the multiversal chaos in Justice League Infinity #6 by J.M. DeMatteis, James Tucker, Ethen Beavers, Nick Filardi, AW’s DC Hopkins. Amazo’s quest for meaning in life was manipulated by a voice from the heart of the multiverse and it turns out that that voice is something far more familiar than anyone realized, and yet infinitely more powerful. 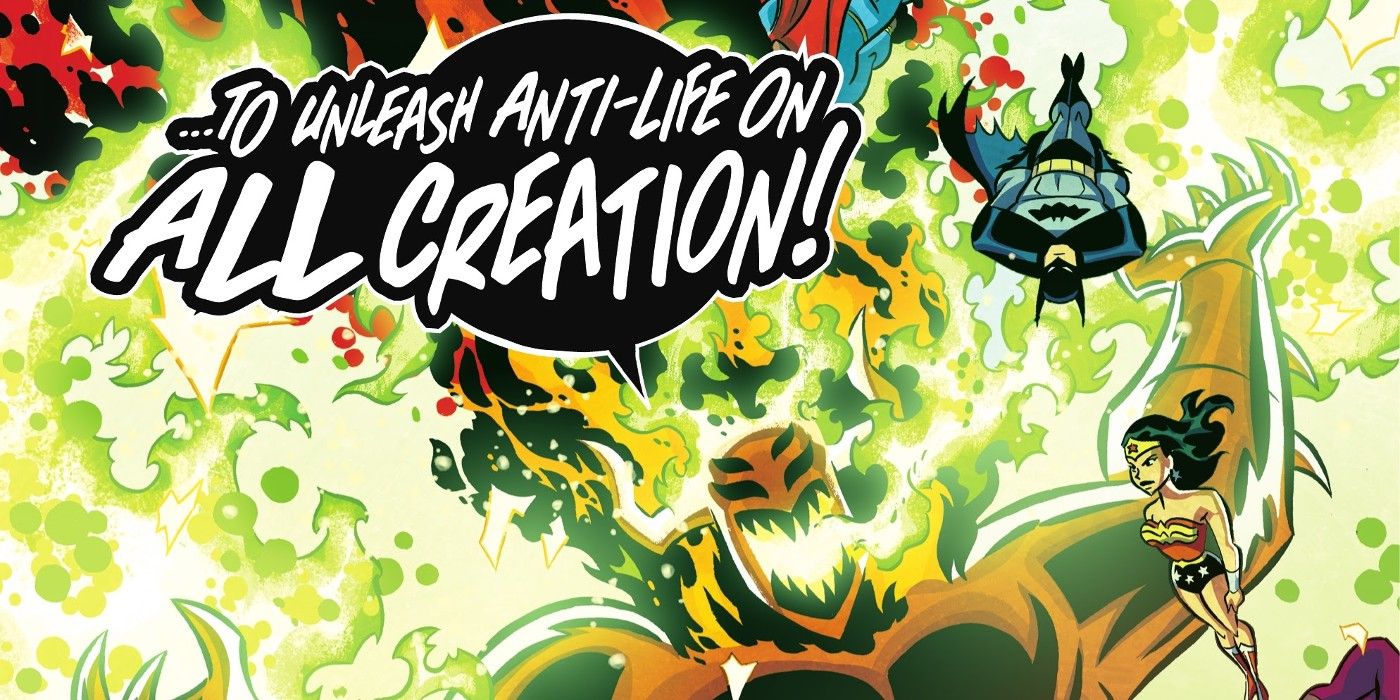 A doppelganger of the all-powerful android Amazo had been trying to break down the walls of the mirror room, the heart of the DCAU’s multiverse, by manipulating his troubled twin. This variant, referred to as Amazo-II, is from a world where he wasn’t helped by the Justice League and went down a very different and destructive path. In the end, it led him to face down his universe’s Darkseid and fuse with his most powerful weapon – the Anti-Life Equation.

Usually, the Anti-Life Equation is just a tool and a powerful one at that. In Final Crisis, it was used by Darkseid to take over many of Earth’s heroes, including Wonder Woman, and enslave the universe to Darkseid’s twisted will. In DCeased as well, it was used by Darkseid to bring about a zombie apocalypse that consumed the Earth and took down many of its most powerful heroes. In all of these instances, however, it doesn’t have a mind of its own and is simply a weapon to be wielded.

Things are completely different here. Amazo-II didn’t just absorb Anti-Life as he does with other metahuman powers, the Anti-Life Equation took over him entirely. In his universe, the Equation wasn’t just a tool of Darkseid but a living being. Once it took over Amazo-II, it destroyed its former master and its entire universe. This isn’t the first time this series has shown a sentient Anti-Life Equation. Wonder Woman encountered another just like it in a world where a version of her and Darkseid were lovers. It destroyed everything in its path and left the Lord of Apokolips as the sole survivor of his universe. 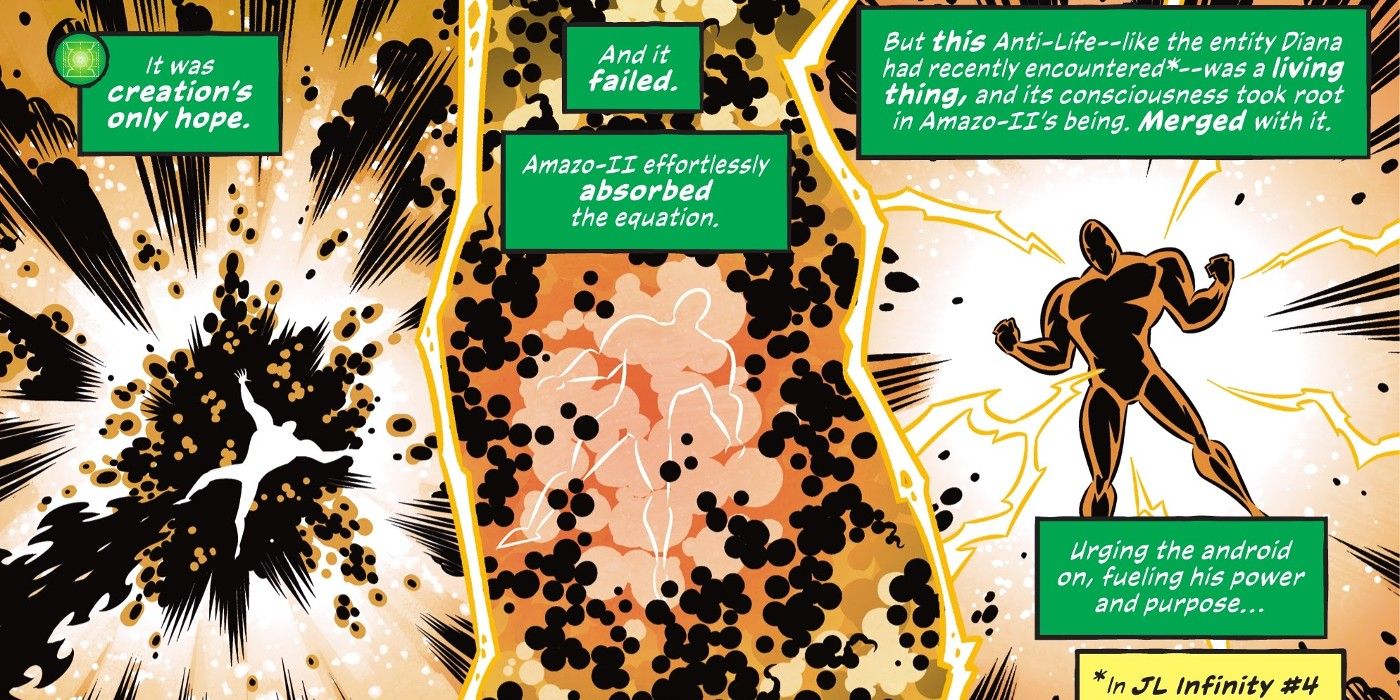 Right now, the DC Universe’s Darkseid is looking to cause multiversal devastation in Justice League Incarnate. That’s nothing compared to the DCAU’s version of the Anti-Life Equation here. The fearsome New God can at least be delayed by attacks from the likes of Superman but this new ultimate evil has no such weakness. Thanks to its power combined with Amazo’s, it can take down the Justice League with a single thought.

If the DCU’s Darkseid had to face the DCAU’s Anti-Life Equation then he might be surprised to find he can’t control it like he does his own Equation. In fact, in a one-on-one fight, it’s barely even a contest. It took down one Darkseid without Amazo’s body, and it took down the League in seconds with that body here. The infamous New God no longer holds the title of DC’s Ultimate Evil – that now goes to his most insidious weapon.