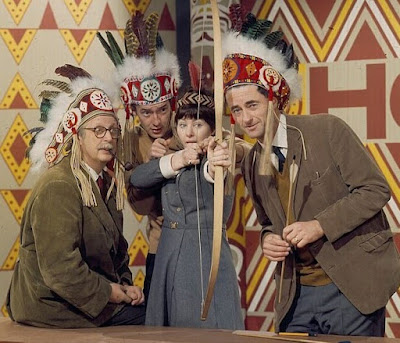 I was dozing away in front of the TV on Saturday morning, when on comes a programme called How.  Could this be related to the one I watched as a kid, I found myself wondering.  Yes, it was, but it was fronted by three ‘youngsters’ with that ‘I’m your wild and wacky pal’ style of presenting, of the fixed broad smiles and staring eyes variety that I so despise.  I found myself wishing that Fred Dineage was back presenting it, when a stylised visual of his face appeared momentarily on screen.  “Ah, well,” I thought, “at least they’re acknowledging his place in the show’s history.”

Then the great man himself popped up, in filmed inserts where he’s described as ‘Head Of How’.  I don’t think he actually appeared with the three newbie presenters, but it was great to see him still connected with the show.  I seem to remember when the original How with the first set of presenters first appeared on TV, but it could well just have been its first broadcast in Scotland on STV, back in the ’60s.

The pilot was hosted solely by its creator Jack Hargreaves and shown late at night, originally intended to give its adult audience interesting things to talk about when they were next in the pub, drinking with their mates.  Then, after a rethink, Jack thought it would be better suited to kids, and it went out on an afternoon slot, at first with Jack again being sole presenter.  It wasn’t long before others joined him, such as Fred Dineage, Jon Miller, Bunty James, and Marian Davies, to name just the better known ones.

The original show ran from 1966 to 1981, which surprised me, as I think the last time I saw it would’ve been in the ’70s, though there’s a chance I’ve simply forgotten viewing after that date.  It was revived as How 2 in 1990 until 2006, again with Fred Dineage, and actually lasted a year longer than the original run, though with fewer episodes.  The series from which the episode I saw was made in 2020, so maybe I was watching a repeat, but it was good to see Fred again, in essentially the same show I viewed as a kid.  I hope they make some more.

I preferred the way kids shows were presented back in the ’60s, with there being no difference in the way presenters addressed their young audience to that of older viewers.  There were no unnaturally wide smiles, popping eyes, and manic movements; no condescending, patronising delivery – just presenters who behaved in the same professional way regardless of the age of their audience.

Whaddya think, Crivs?  Am I making too much of things, or are some of you in agreement with my observations?  Tell all in the comments section.

Here’s what I consider an interesting thought.  Nowadays, the photo at the top of the post would likely be criticised for ‘cultural appropriation’, even though Red Indians (aka native Americans*) who walk about in denims and tee-shirts get a free pass.

(*At least until someone decides that the word ‘native’ is offensive on the grounds that it suggests uncivilised and primitive.)

President Joe Biden Reacts To Betty White’s Death: “She Was A Lovely Lady”