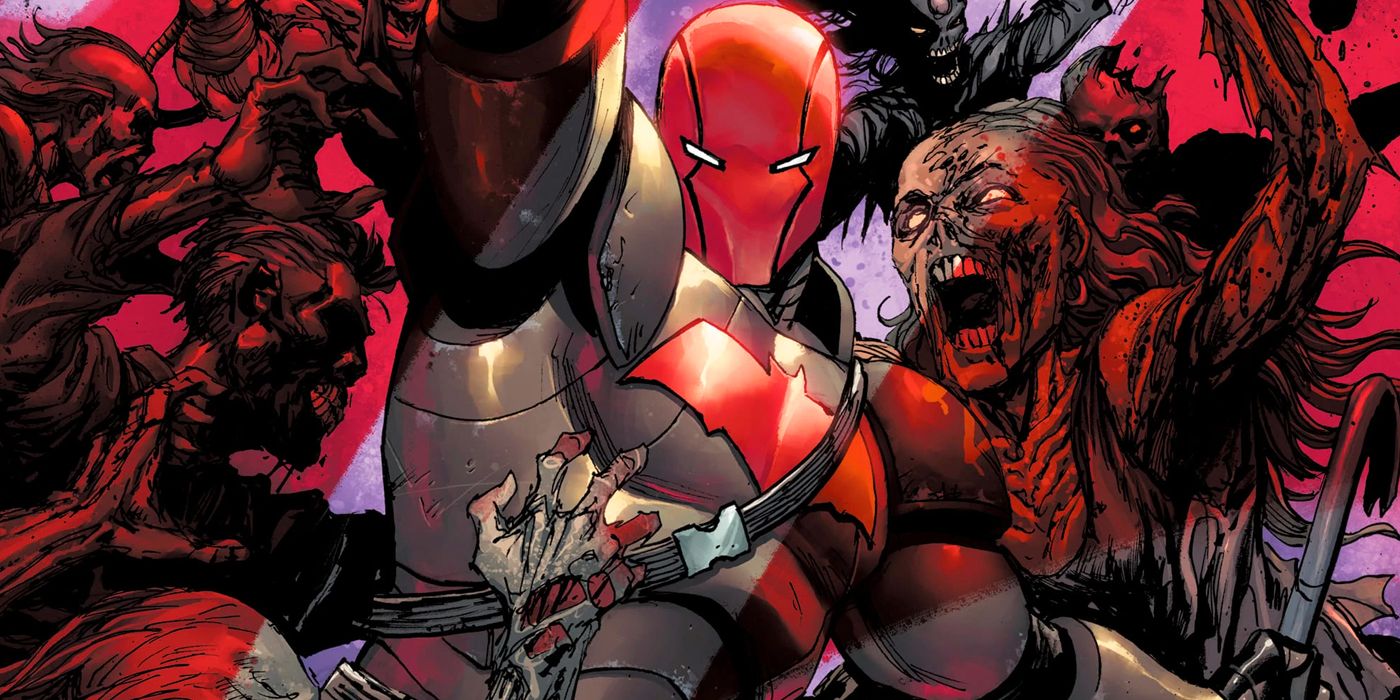 Jason Todd — aka the Red Hood — has filled a unique place in the DC Universe as the outlier among the former Robins — a brutal vigilante who doesn’t share the overt optimism of his allies. This has allowed him to develop bonds with surprising figures in the past however, such as with Bizarro and Artemis. Now, there’s another unlikely figure he’s been making a connection to: the Arkham Knight.

Jason Todd and Astrid Arkham get the chance to actually talk to one another in Task Force Z #2 by Matthew Rosenberg, Eddy Barrows, Eber Ferreira, Adriano Lucas, and Rob Leigh. This might quietly set up a potentially interesting relationship between the two characters who — in different mediums — took on the mantle of the Arkham Knight. 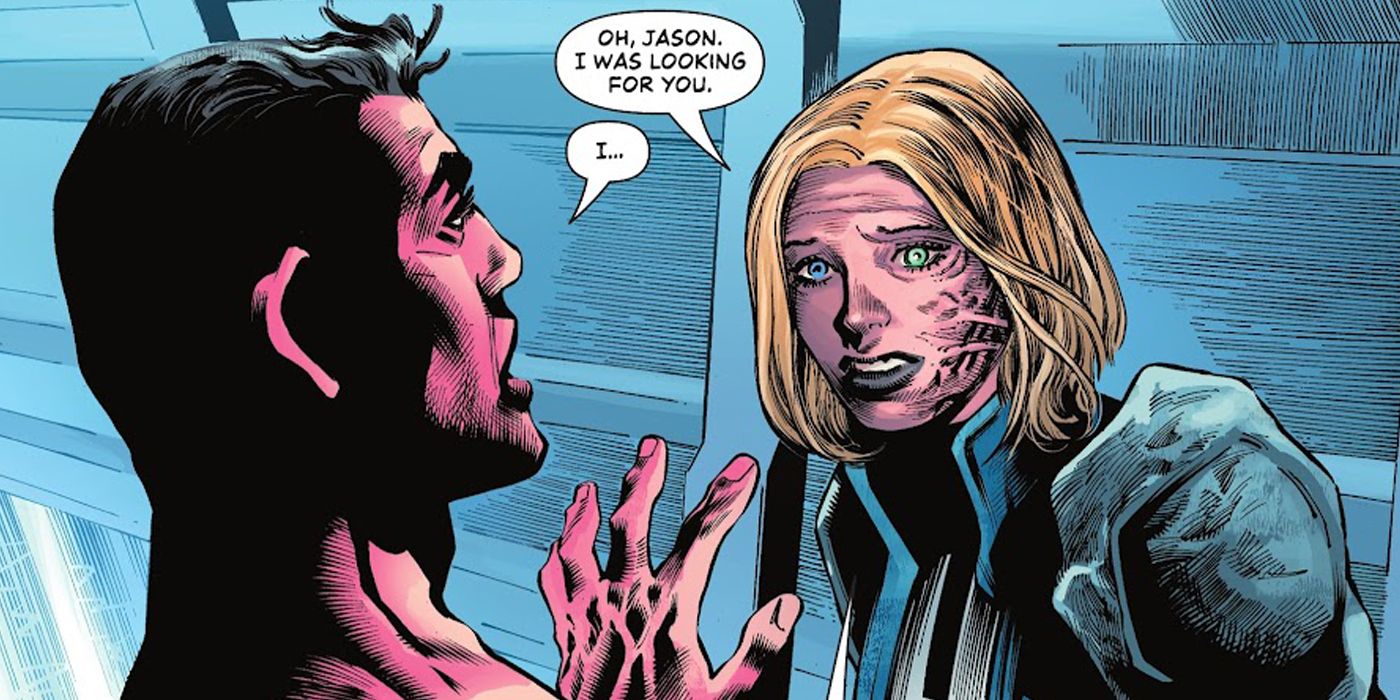 Astrid Arkham was introduced in Detective Comics #1000 by Peter Tomasi and Doug Mahnke. The daughter of Jeremiah Arkham, she was raised within the halls of Arkham and developed a rapport with the inmates of the asylum. She subsequently developed a deep hate for Batman, even blaming him for the death of her mother (who’d been killed when an imate used a discarded Batarang during an Arkham riot). Growing up, she dedicated herself to ridding Gotham of the threat of Batman as well as pain and crime in Gotham — christening herself the Arkham Knight. She was eventually confronted and defeated, landing her in Arkham herself.

Astric was among the numerous casualties during A-Day, an attack on the asylum that was orchestrated by Simon Saint to drive Gotham into enough of a panic to justify the introduction of the Magistrate to the city. However, she — along with Man-Bat, Bane, and Mister Bloom — have been revived with a Lazarus Resin that temporarily revives them in a zombie-like form, to be used as members of the newly formed Task Force Z. Although they can quickly lose control of themselves without enough of the resin pumping through their system, this has effectively allowed Astrid to be restored — albeit in a new, somewhat corrupted form. 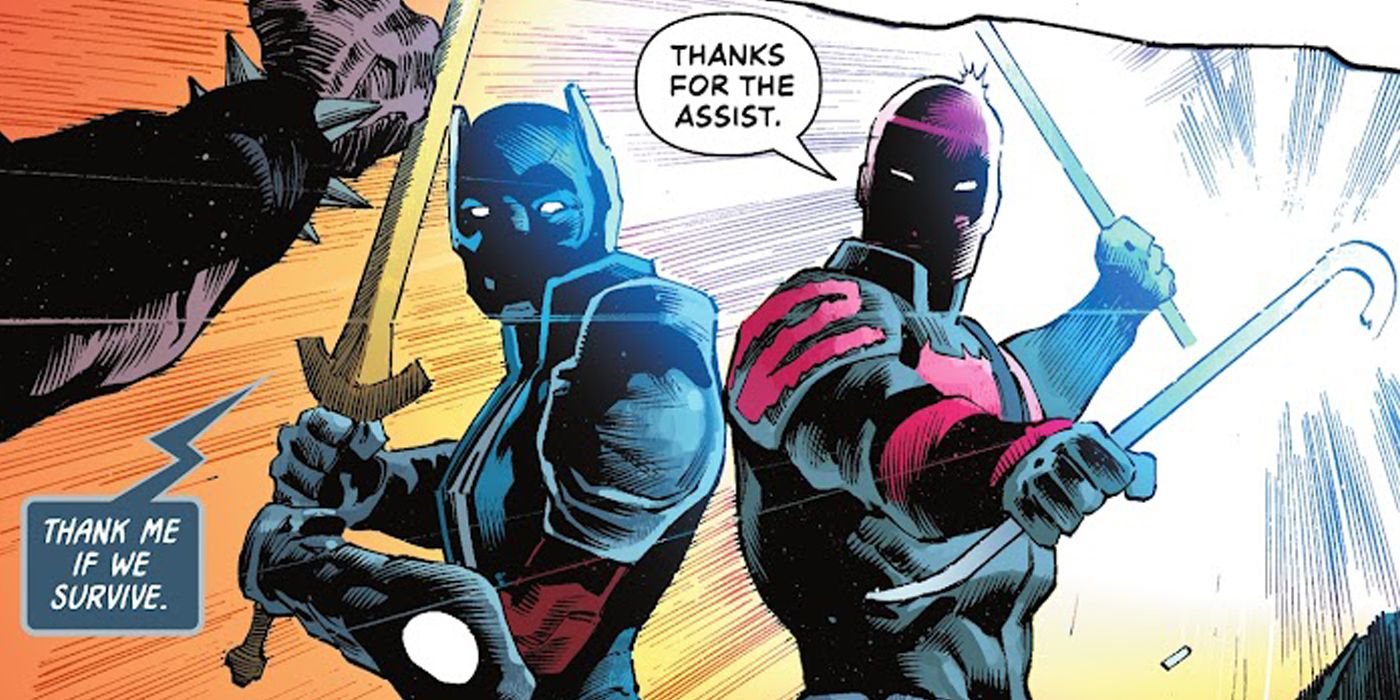 Speaking with Todd after a mission, Astrid briefly discusses their last mission and quietly reveals her humanity to the former Robin — catching him by surprise with a genuine conversation. The pair end up fighting back-to-back during their next mission, suggesting they’d make good partners. On one level, it’s an ironic echo of the Arkham Knight’s history. The identity first debuted in the Rockstar video game Batman: Arkham Knight, with Jason Todd taking on the mantle in an attempt to target and ultimately bring down Batman. The identity then made its way into the comics in Detective Comics #1000, where it was utilized by Astrid and was largely unconnected to Jason. But now, the pair are openly working together and might get more time to get to know one another better.

Like the Arkham Knight, Red Hood has long believed there’s a better way to defend Gotham and fight crime than just the tactics used by the Bat-Family. The two have very different views on the inmates of Arkham, however, with Jason eventually adopting a far darker perception of the world than most — while Astrid has done her best to bring light to the plights of her fellow former inmates. Her Future State incarnation even became a major hero, leading former villains as a resistance movement against the machinations of the Magistrate and their forces. Jason and Astrid differ in key ways — particularly their experiences with villains — but could empathize with one another as nominal human beings on a team of monsters — even if both of them are just one step away from being turned into beasts themselves.

It’s an interesting pairing to see DC embrace, as their violent natures but heroic ideals might make them a perfect pairing. If Jason is looking for someone he can trust, then Astrid might be an ideal candidate — if she can keep her zombie-like impulses more under control. But this could also end up influencing Jason in some dark ways — potentially risking the recent bond that Jason has reaffirmed with Batman by pointing him towards a darker view of Batman and his war on crime. There’s even a chance Jason could see the appeal to her identity and become a core-DC Comics Arkham Knight himself — if he can survive the events of Taskforce Z, which have already put his life at risk plenty of times.

The Nice House on the Lake Vol. 1 Review!