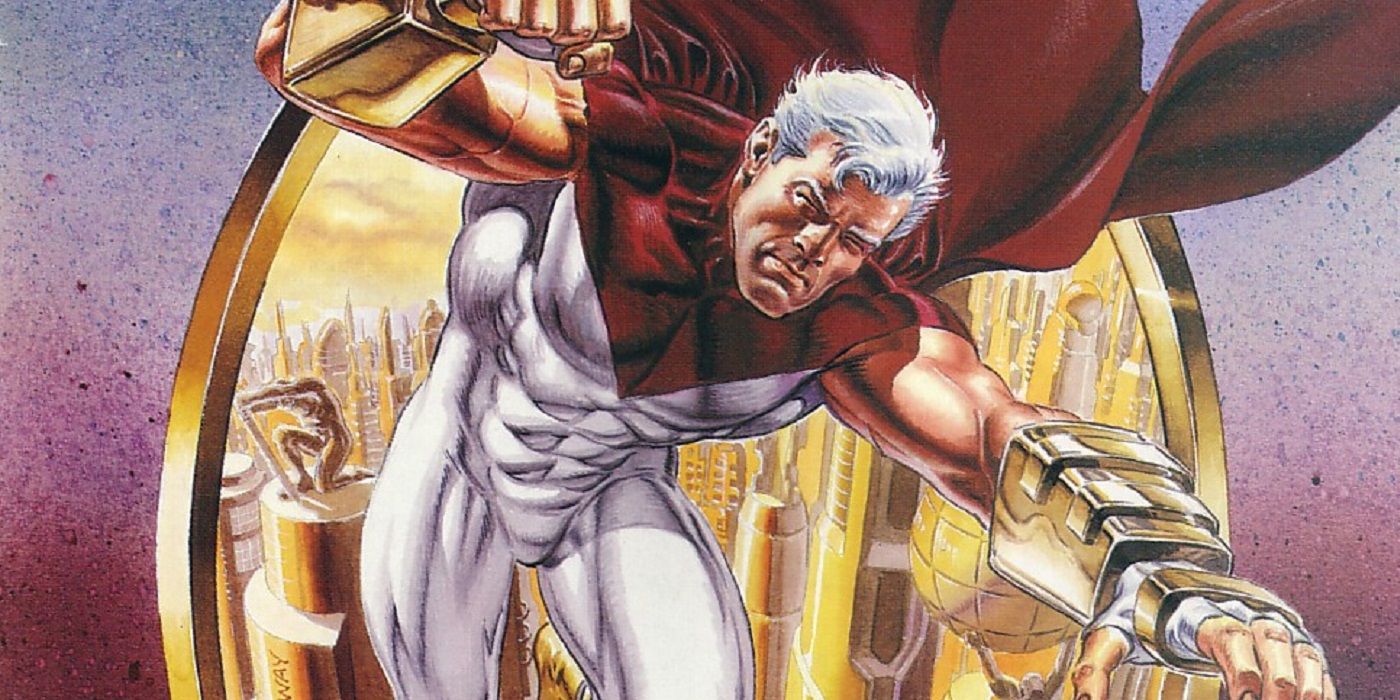 Today, we look at how Alan Moore dramatically revamped the Image series, Supreme, but in the process, also redeemed Superman in Moore’s mind.

This is a feature called “Nothing is Better,” where I spotlight aspects of classic comic books that have particularly impressed me.

Alan Moore’s run on Supreme was one of the most amazing turnarounds for a comic book character in comic book history, and Supreme wasn’t even necessarily in all that bad shape when Moore took it over (as Jim Valentino and Tom and Mary Bierbaum had just told an interesting story involving, amusingly enough, alternate versions of Supreme and a fight with the Norse God of Mischief, Loki).

In the early days of Image Comics, Rob Liefeld’s Extreme Studios was brimming with new characters as Liefeld had so many new ideas and he would typically us his flagship title, Youngblood, to introduce new characters and in Youngblood #3, he introduced Supreme, sort of like “What if Superman used his powers in more extreme ways?” Liefeld initially tried to get John Byrne to draw the series but Byrne was not interested, so Brian Murray was the initial artist on the series, with Liefeld writing the book. Liefeld had a long run on the series as the writer, but eventually other writers took over.

Liefeld then enlisted Alan Moore to take over the book and do what he wanted with it and boy, did that work out!

Alan Moore explained his logic for taking over the series to the great George Khoury in Khoury’s book, The Extraordinary Works of Alan Moore, “I decided that I’d rather liked the old Superman, that I’d rather enjoyed that rich mythology and continuity, all those kind of stupid but enduring elements, you know? Krypto the Super-dog, all of the old fashioned stuff that had so much more charm than the modem incarnation of the character. And so, having come up with what I thought was the core intriguing and whimsical idea of the Supremacy, the idea that there was some place where whenever a comic got revised, all of the stuff that had been revised out of the book ends up in some sort of limbo dimension. And that every conceivable misguided version of the character exists there somewhere, out of continuity. And once I’d come up with that fairly simple idea. I realized just how rich and funny I could make my treatment of it. The idea of a planet with hundreds of Supremes, every conceivable variation and where of course I could parody the various ills of the comic industry and where I could play with wonderful ideas, you know? Which was always the thing that Superman represented to me as a child. It didn’t represent to me power or security or anything like that: it represented wonderful ideas, ideas that to me at that age were certainly magical. Where, to me, they provided a key to the world of my own imagination. And so what I wanted to do with Supreme was to try and give some of that sense of wonder, some of that pure imaginative jolt that I’d experienced when I was first reading comics. I wanted to try and give that to the contemporary readership so they could get an idea of what it had felt like. The kind of buzz that those wonderfully inventive old stories and comics had provided.”

Supreme, therefore, was Moore’s way to bring the “real” Superman back (and of course, the irony is that Moore was the one who DC brought in to tell the final story of that version of Superman in “Whatever Happened to the Man of Tomorrow?”).

RELATED: Suicide Squad: How Amanda Waller Stood Up to Darkseid

In August 1996‘s Supreme #42 (by Moore, Joe Bennett and Norm Rapmund, with a flashback sequence drawn by Keith Giffen and Al Gordon), Supreme returned to Earth from his last adventure but finds himself on a whole other Earth! Right off the bat, though, readers could tell that there was something different going on, as Supreme was now using phrases like “Merciful Maker of the Stars!” 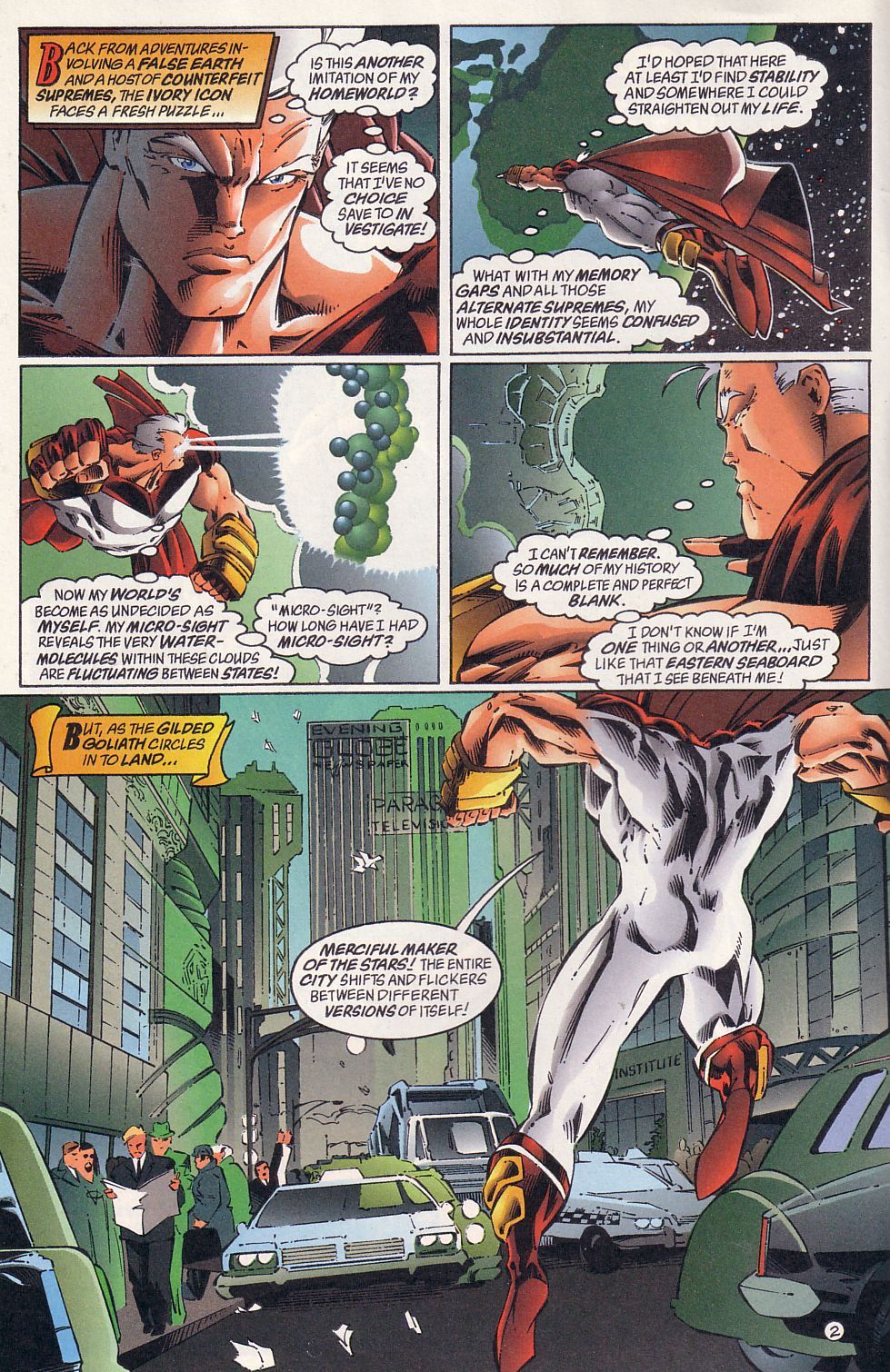 Supreme is then accosted by alternate versions of Supreme. It is fun to see the other Supremes sort of mock the 1990s aspects of this Supreme (in some less than subtle meta-commentary by Moore about 1990s superheroes, in general)… 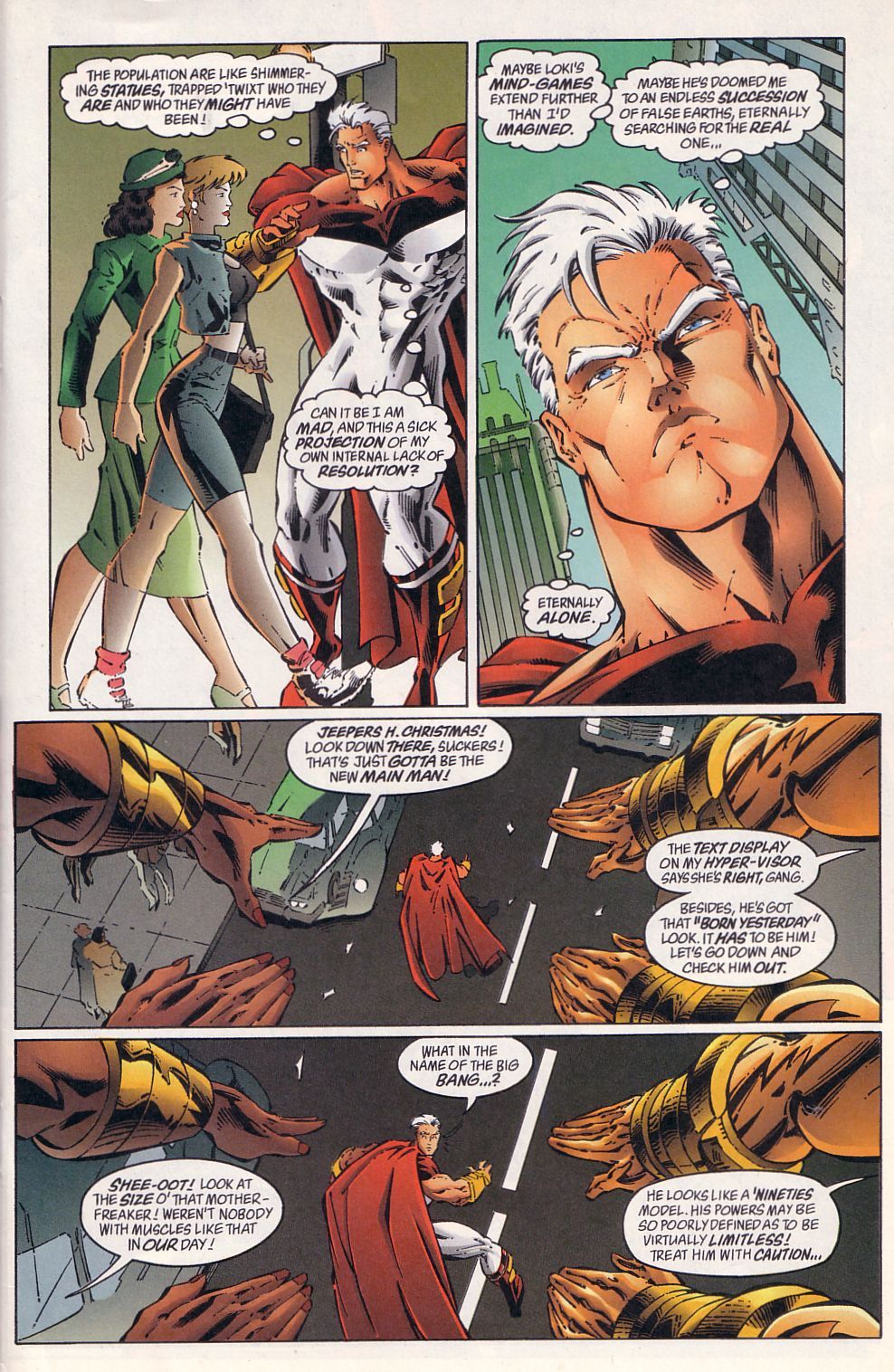 Supreme surprisingly more than holds his own against the other Supremes, but he is ultimately taken down by a sort of Mighty Mouse-riff on Supreme…. 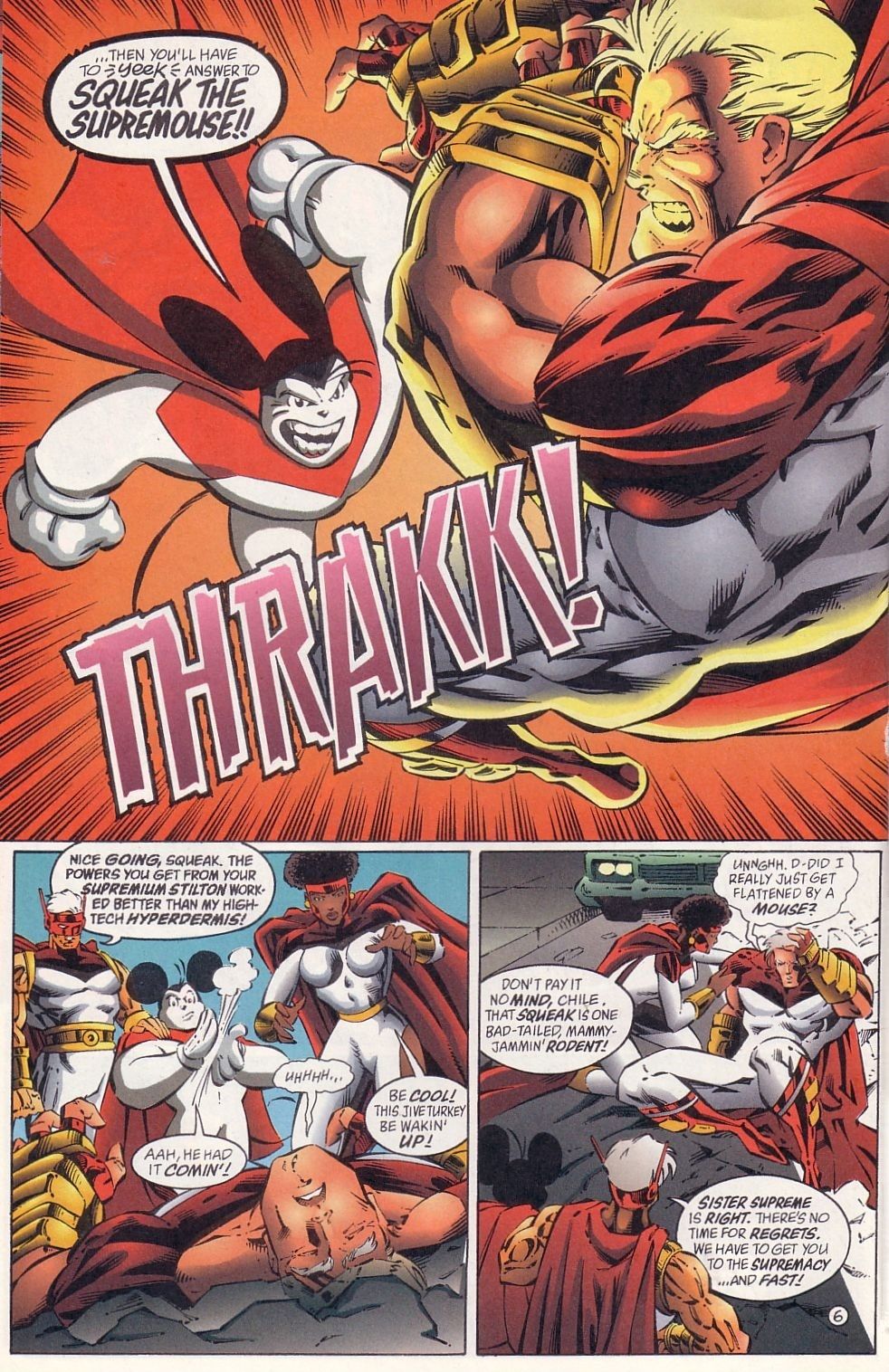 The other Supremes then take Supreme to the Supremacy, a world filled with Supremes that are sent there when they become no longer relevant. In other words, imagine what happened to the original Superman when the Superman who could smash planets showed up? The idea is that the original version ended up in a comic book limbo, of sorts, and for Supremes, that limbo is the Supremacy… 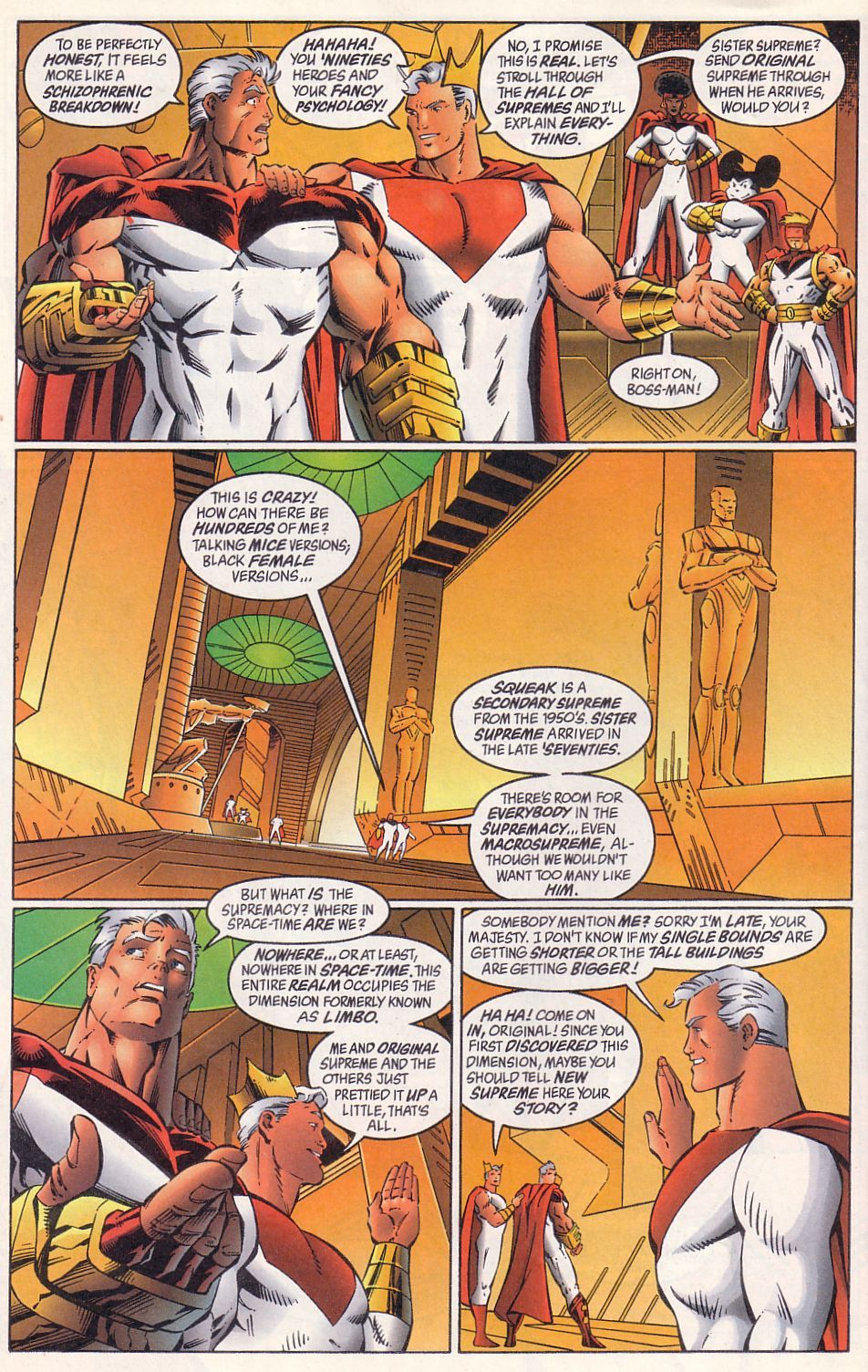 Moore, of course, gets to use this world to make lots of little jokes about various points in Superman’s history (while also continuing to mock 1990s superheroes, of course). In the end, we learn that Supreme is unusual because he got to see this world at the BEGINNING of his adventures and not the end, like the others. So he is sent off to see what his new revamped adventures will be like… 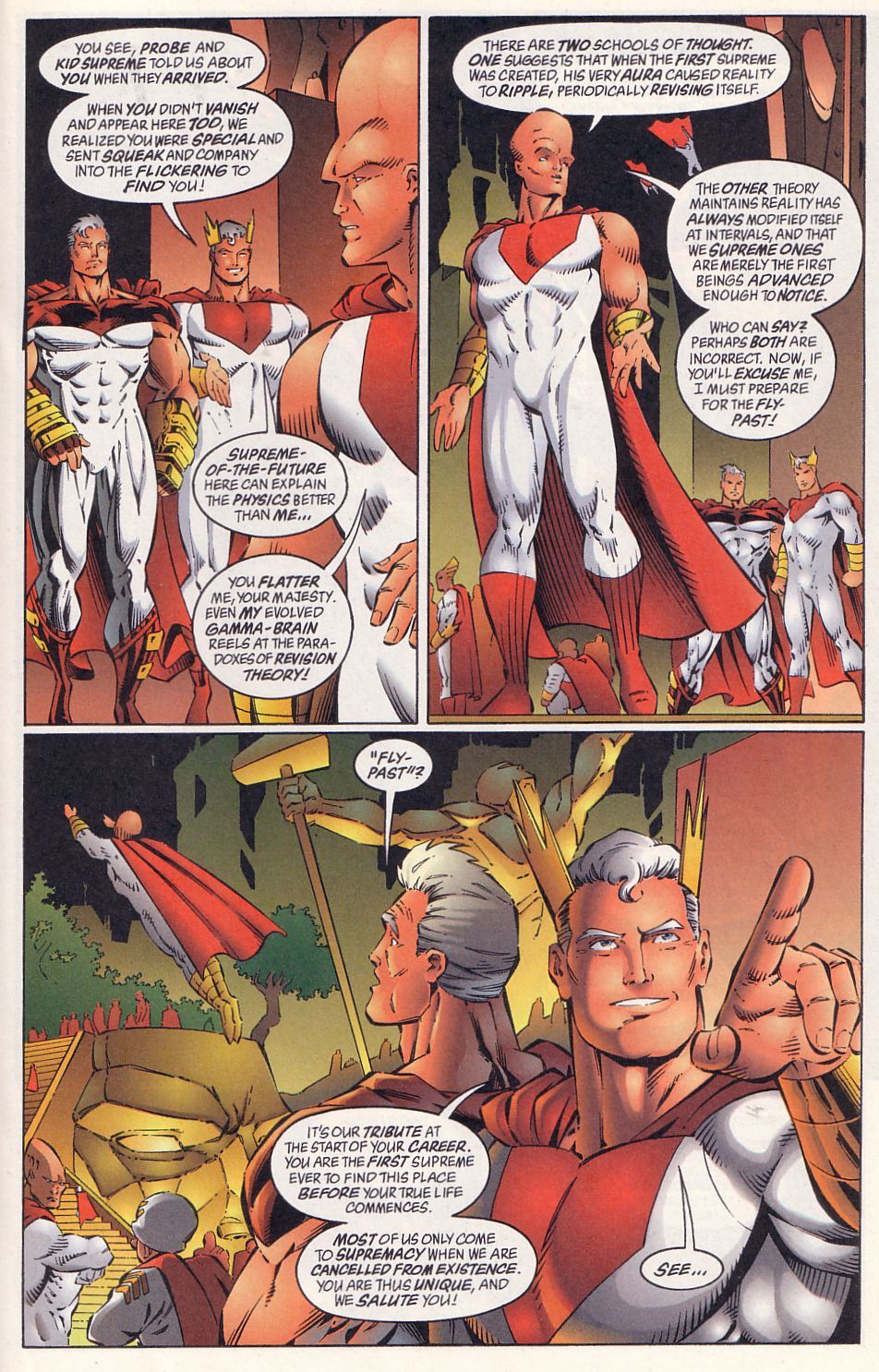 And when he enters his new revamp, he sees that he is now a comic book artist in his secret identity of Ethan Crane, something that will allow Moore to ratchet up the meta-commentary even more in the series… 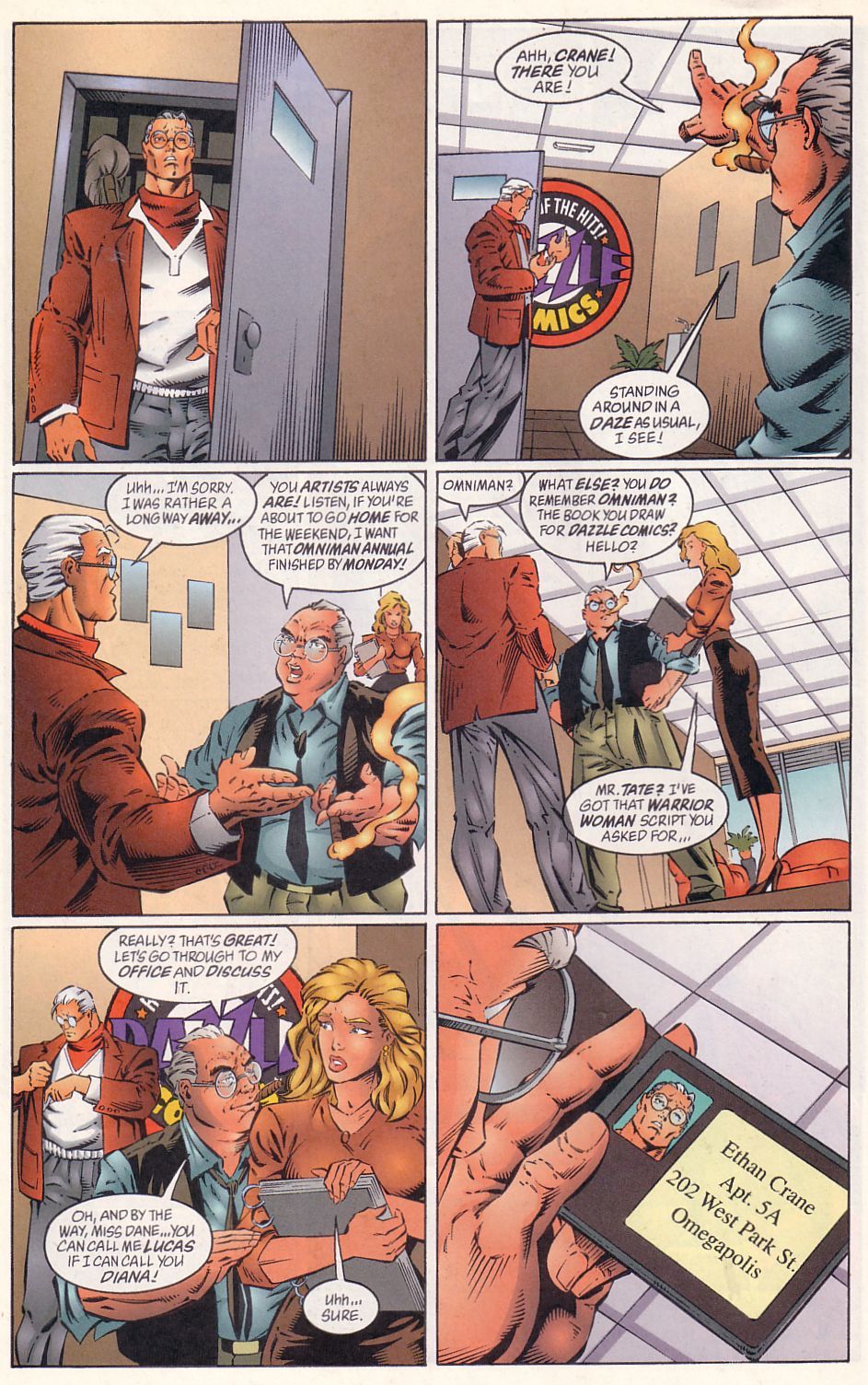 This was a tremendously effective revamp by Moore that set up a great run of comic book stories. Also, how awesome is the Jerry Ordway homage cover that I used for the header?