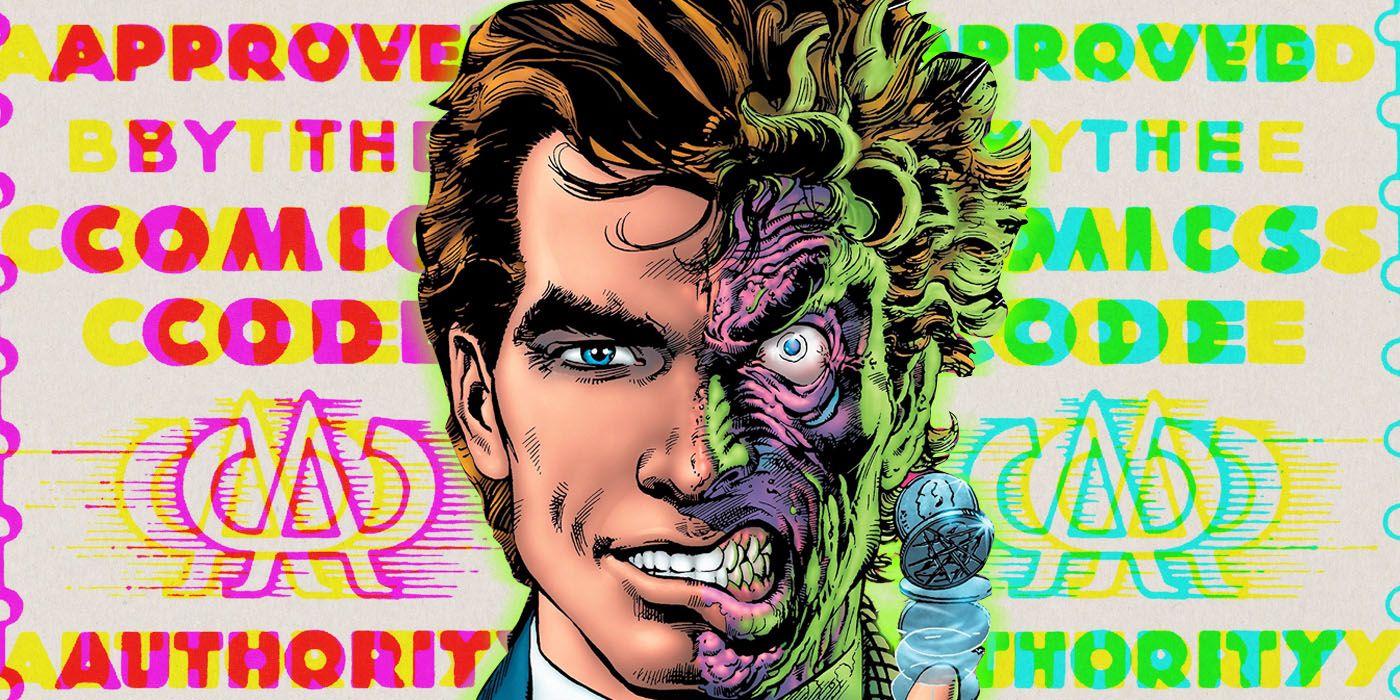 In the latest Comic Book Legends Revealed, find out whether the Comics Code Authority banned DC from using Two-Face as a Batman villain.

Welcome to Comic Book Legends Revealed! This is the eight hundred and nineteenth installment where we examine three comic book legends and determine whether they are true or false. As usual, there will be three posts, one for each of the three legends. Click here for the first part of this installment’s legends.

Batman’s villain, Two-Face, was banned from appearing in comic books due to the Comics Code Authority.

I did a legend like this on Catwoman before and I realize that the same basic story has existed for Two-Face, as well. Again, let me note that I am not picking on the article I’m quoting here, as a lot of people have written similar things (and really, this is a very well written article. So I’m actually sharing it because of how WELL-written it is, it just also happens to repeat a popular belief that I think is slightly off):

Two-Face wasn’t always such a vital part of Batman’s shadowy cabal of enemies. In fact, Harvey Dent was almost entirely absent from DC Comics for over a decade. Following his introduction in 1942’s Detective Comics #66, the character only appeared a handful of times in the forties and fifties before disappearing entirely. The creative team didn’t really know what to do with the character once they’d figured out his gimmick (which was noticeably less nuanced than it is nowadays, as we’ll find out later), and so simply didn’t use him as much. They were also bound by changing trends in the world of comics publishing, itself inspired by the strict censorship of the Comics Code Authority which controlled the content of all mainstream funnybooks. A violent, chaotic and hideous villain such as Two-Face would probably have failed to pass the CCA’s checklist of suitable content for kids, and DC were skewing more towards that younger demographic anyway. He was dropped in favour of more “kid friendly” villains, because we guess The Joker is somehow less terrifying to a toddler than a guy with a weird face flipping a coin.

RELATED: Why Did Marvel’s Thanos and Galactus Fight in an Italian Comic and Who Won?

In fact, Two-Face made his return to new Batman comic books in June 1971‘s Batman #234 (by Denny O’Neil, Neal Adams and Dick Giordano)… 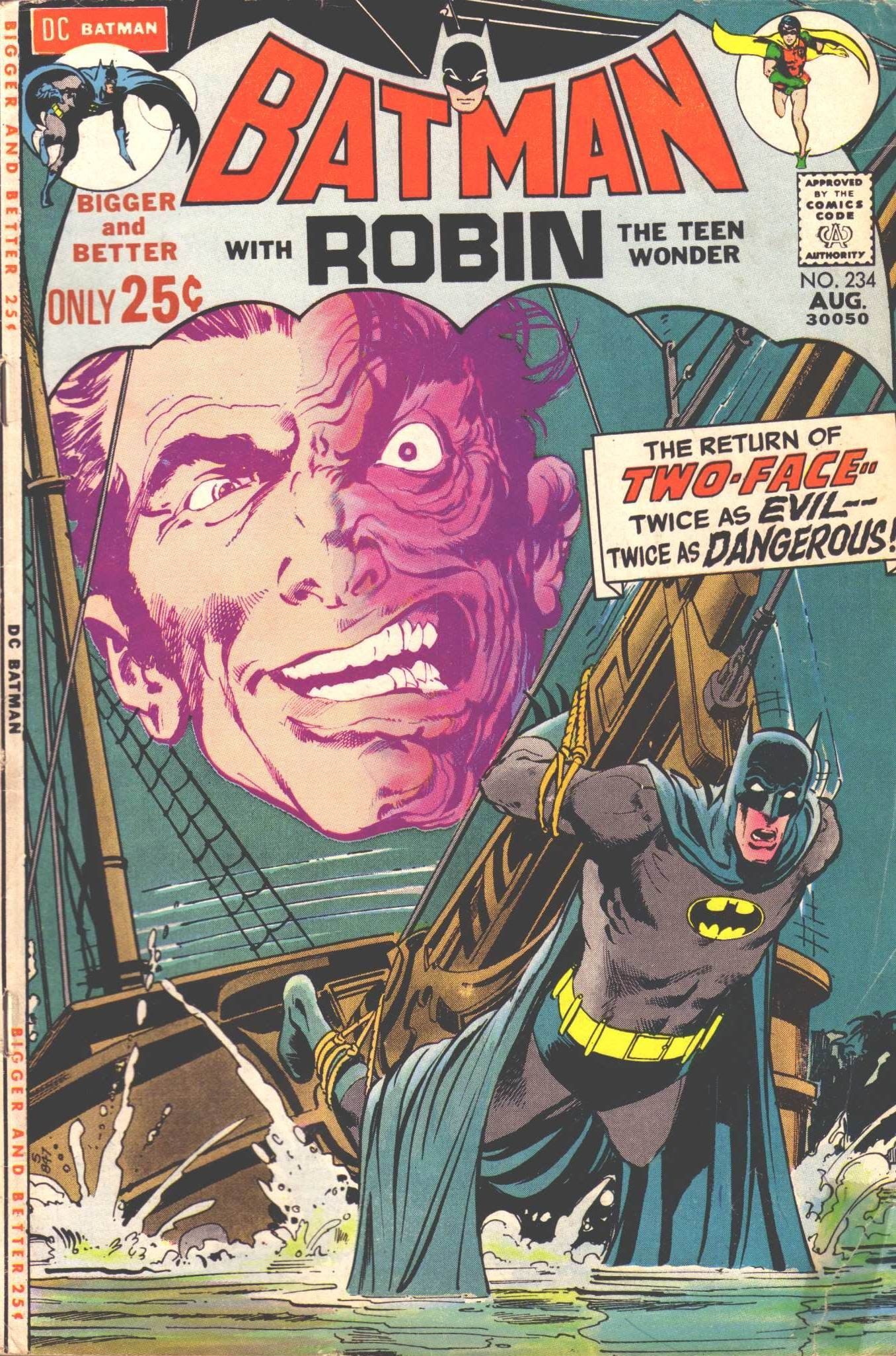 which just so happened to also be the same exact month that that same creative team released the famous Green Lantern/Green Arrow anti-drugs issue (with Speedy being revealed as a drug addict), a comic book that DC specifically waited to release until the Comics Code changed its rules to allow more leeway on things… 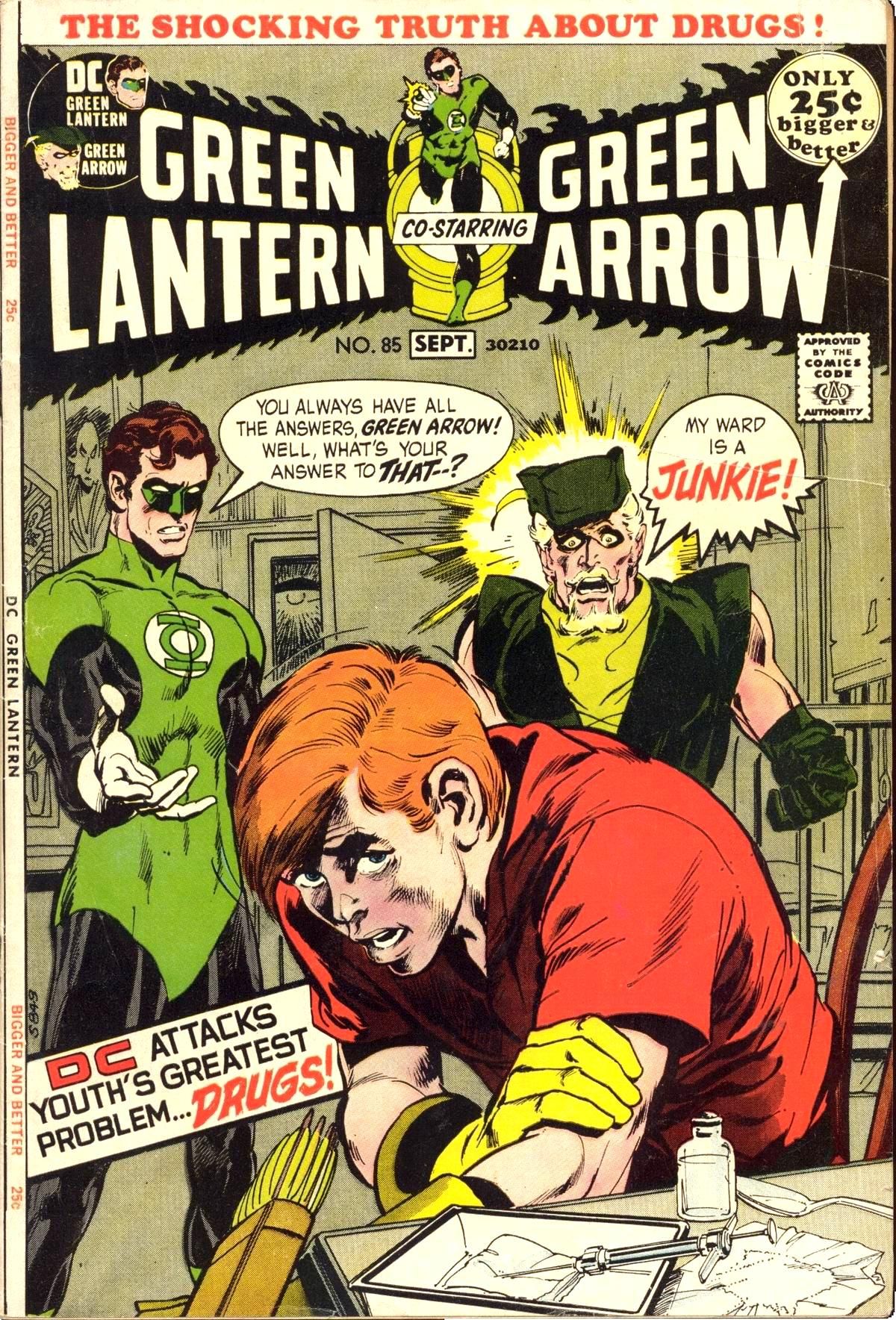 That’s the same time that DC and Marvel were now able to release monster characters that they hadn’t been able to use before. So it seems hard to believe that it is a total coincidence that the relaxation of the Comics Code led to the return of Two-Face, so was it?

I think the answer is that it was NOT a coincidence, true, but at the same time, Two-Face wasn’t banned by the Comics Code. You see, the Comics Code was driven by a psychiatrist named Fredric Wertham, who started an anti-comics crusade in the media even BEFORE he released his book, Seduction of the Innocent, which REALLY got the public in an uproar, leading to the United States Senate holding a subcommittee on examining the content of comic books that went really bad for the comic book industry, as they really didn’t have a particularly good argument for why it was okay for kids to read comic books with covers featuring decapitated women on them.

Therefore, it was DC itself that decided that Two-Face was probably a bit too much, not the Comics Code. How do we know this? Because Two-Face DID appear during the Comics Code era! Just not in new appearances in Batman titles, that’s all.

RELATED: Why Did DC Cancel Jack Kirby’s Horror Magazine After the First Issue?

The 1960s were a big time for reprints (as it was cheap for publishers, and readers didn’t have access to back issues like they do today) and DC did a lot of giant-sized comics filled with reprints, including one that reprinted Two-Face’s origins and the Comics Code DID apply to these reprints and sure enough, as I noted in a legend maaaaaaaaany years ago, when DC reprinted Two-Face II’s origin (from 1951’s Batman #68, by Bill Finger, Bob Kane, either Sheldon Moldoff or Lew Schwarz as the ghost artist for everything but the Batman and Robin figures and Charles Paris on inks) in 1962, the Comics Code DID require them to change the scene where Paul Sloane (an actor playing Harvey Dent) is hit with acid and becomes the second Two-Face… 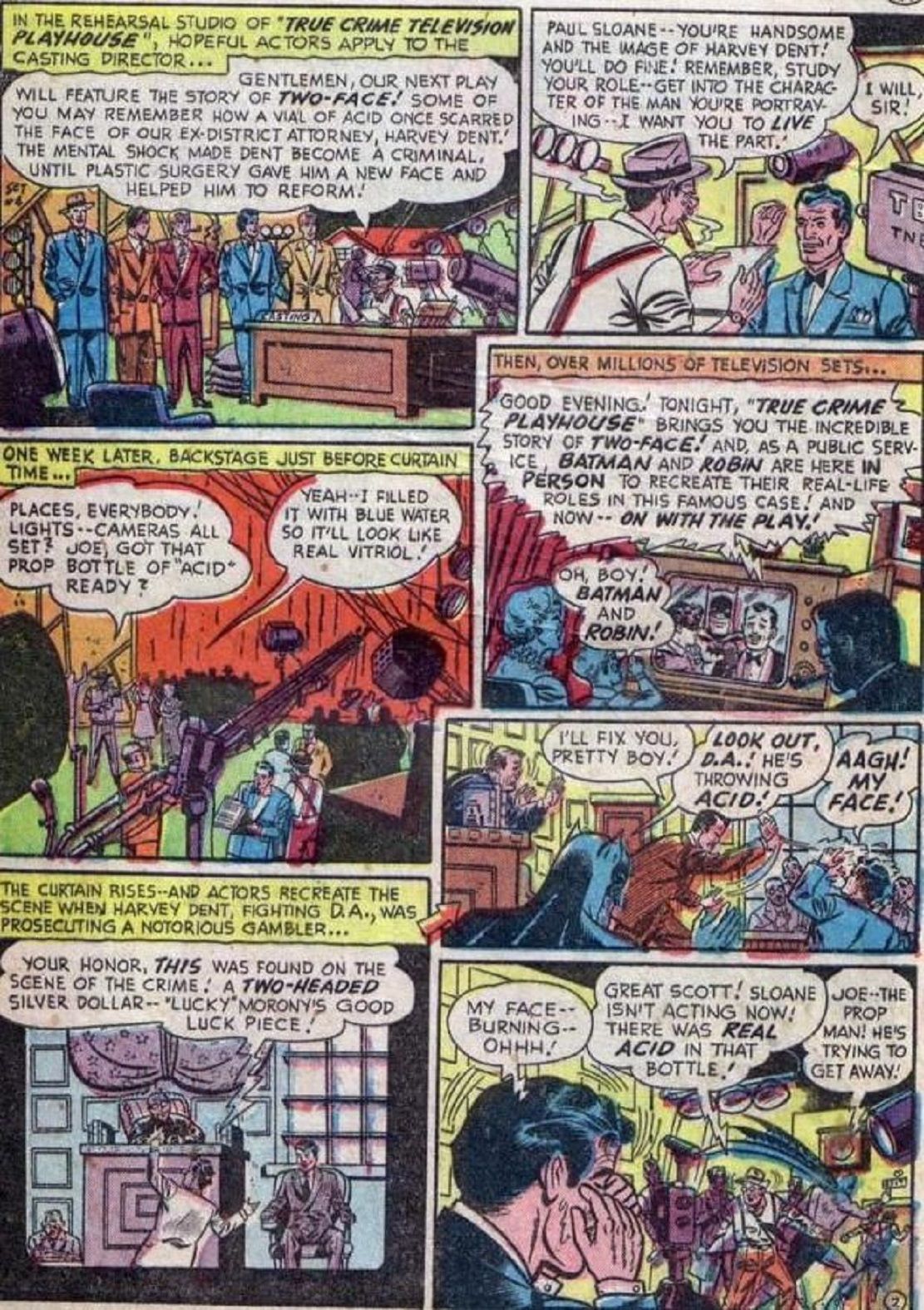 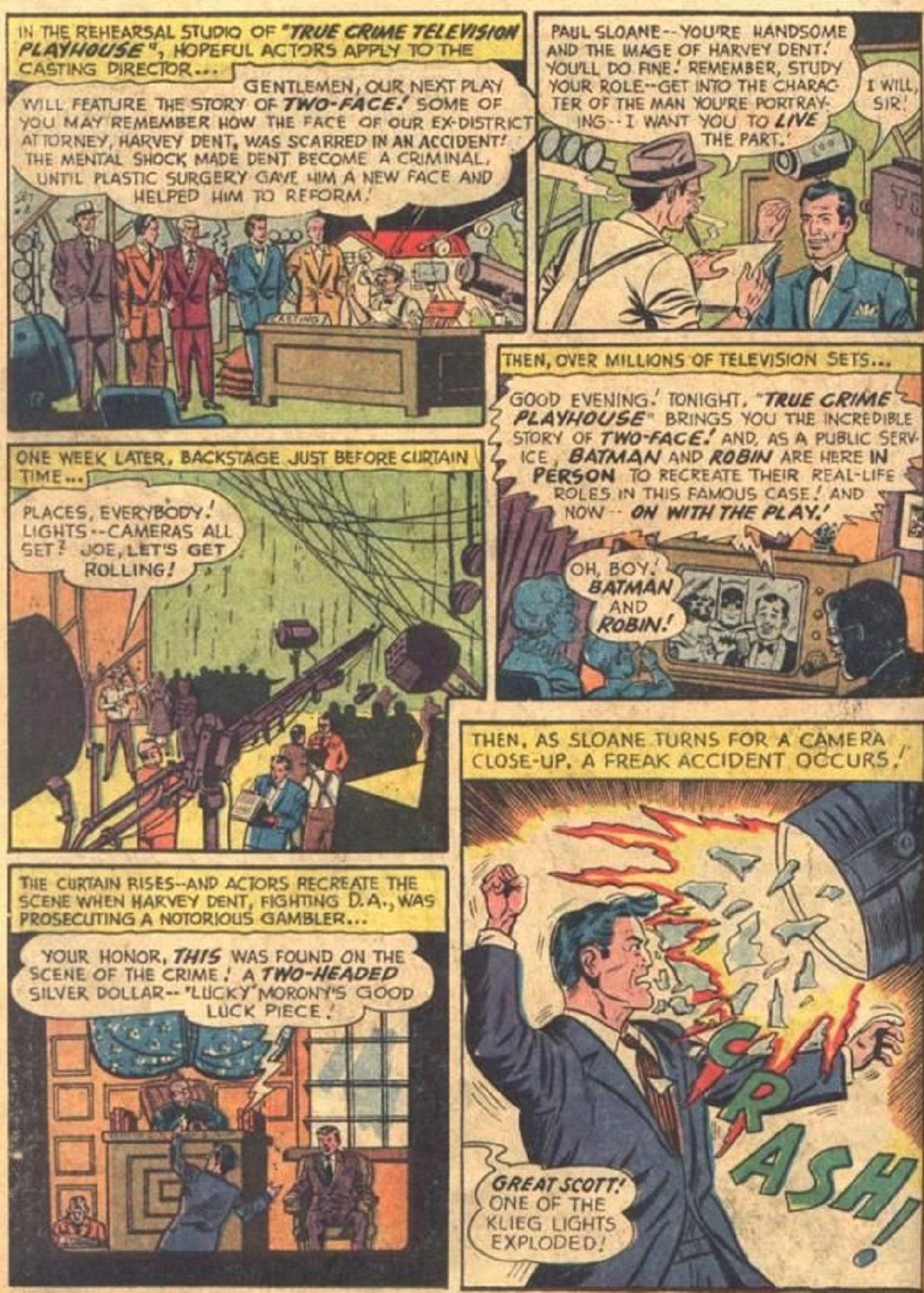 And, by the way, even the piece I quoted had an additional bit where it said, “He did make one brief, notable appearance in 1968’s World’s Finest #173, the Superman-Batman team-up book, where the caped crusader copped to him being his most feared enemy, due to his unpredictability.” 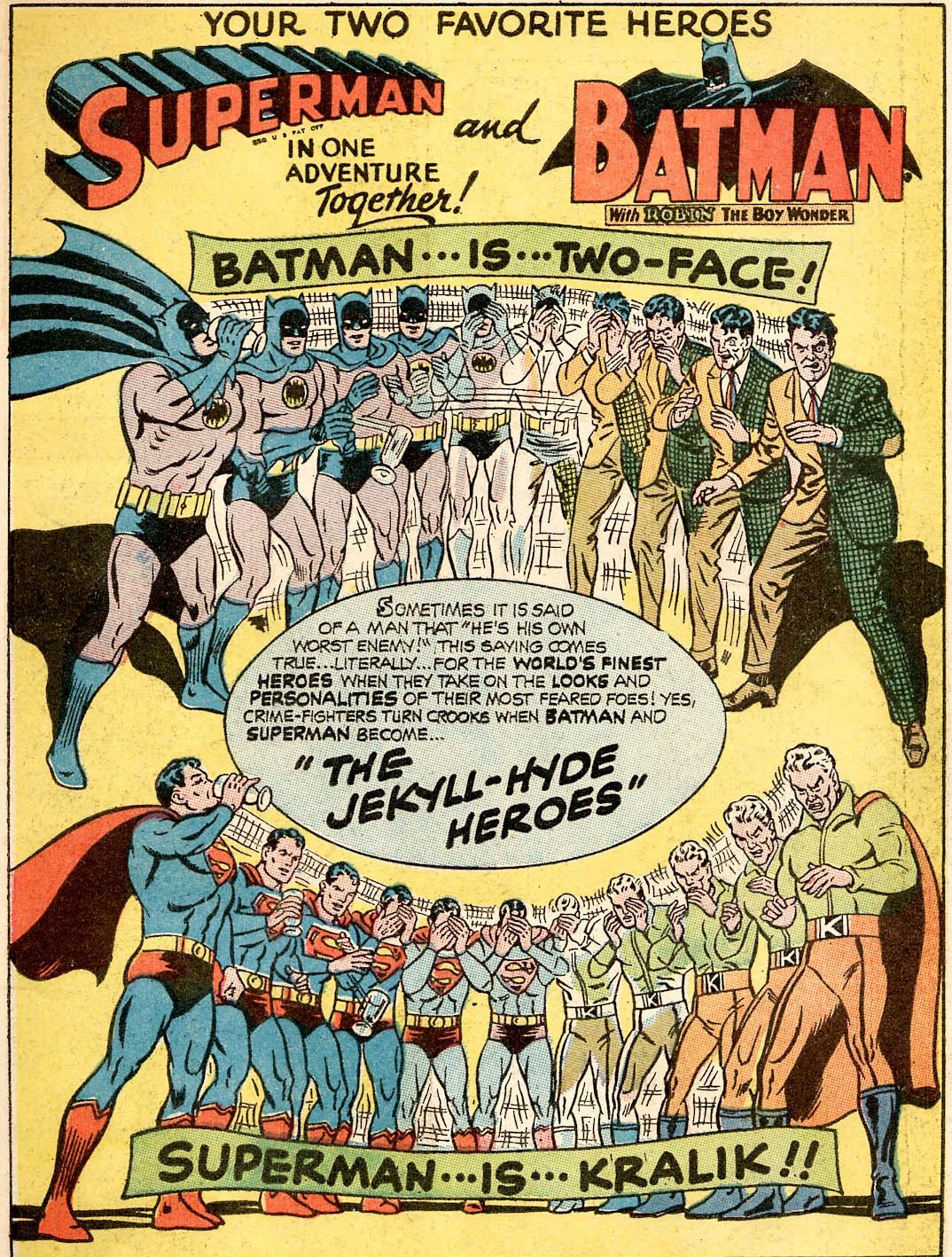 Still, the main thing is that Two-Face DID make Comics Code appearances (just edited to reflect the Comics Code), so he obviously was not banned by the Comics Code, but rather, DC was making decisions on its own to avoid the villain. That said, when the Comics Code famously relaxed, it seems likely to me that when DC and Marvel were rushing out now-Code-approved monster comics, that that WAS an influence on Two-Face showing up again and it DEFINITELY was the reason why Neal Adams could draw Harvey Dent getting a face full of acid in a Code-approved book… 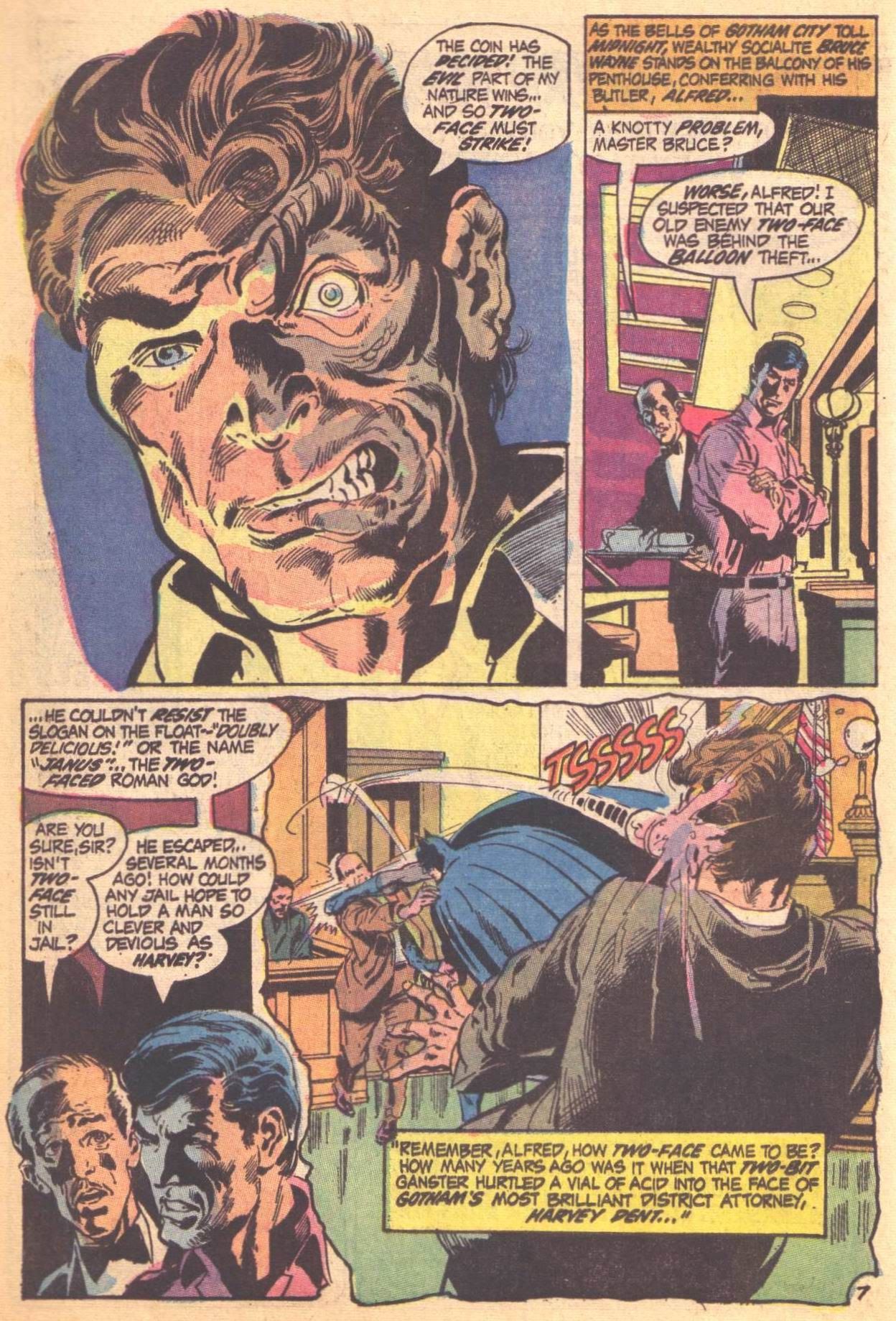 Boy, Adams draws a hell of a Two-Face, right?

In the latest TV Legends Revealed – How did a Hot Wheels cartoon almost change TV forever?

KEEP READING: Why Was There A Special Kansas City Chiefs Spider-Man Comic Book?

Will Delicious in Dungeon Ever Get an Anime?