Well, told you I’d post my new ‘Mego’ toy when it arrived, which was yesterday (Monday), so here it is.  This is a 2016 reissue of the Superman figure on sale in the ’70s, and pretty much the same as the one I bought in Blackpool in 1974.  The costume’s blue colour is perhaps a little deeper, but that apart, it’s the exact same face that was on the one I had.
Although this figure was originally manufactured by Mego throughout most of the ’70s, this reissue is by Figures Toy Co.  I don’t know whether they’re connected or not, but that’s definitely the Mego figure and box, though the box may be one from its later days, not quite sure.
I’ve got one more figure to come, which is on its way from Australia, so if you’re into things like this (I’m being optimistic, aren’t I?) I’ll show it on the blog when it arrives.  Something to look forward to, eh?  (For me, I meant, not you.)
Incidentally, having caught a bit of the new Superman & Lois TV show on Saturday, I realised that the other Supes figure I showed you last month looks a bit like it’s based on the actor who plays The Man Of Steel and Clark Kent.  There’s the figure again below just to remind you.  What do you think – see any kind of a resemblance? 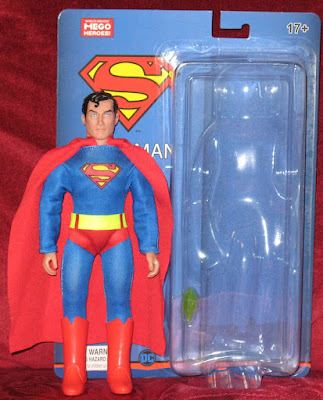 A Year of Free Comics: The incredible webcomics of KAITLIN CHAN