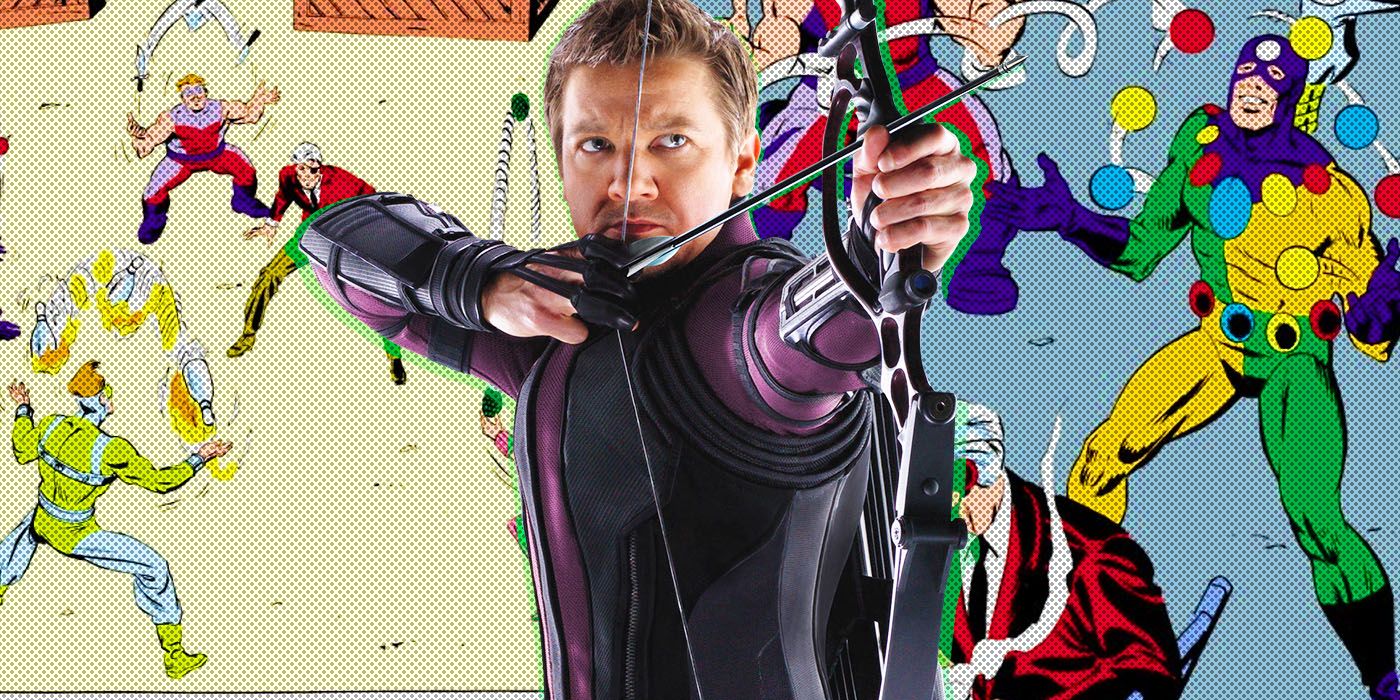 Today, we discuss the Easter Egg in Episode 4 of Hawkeye and how it references one of Hawkeye’s most offbeat villains.

In Comic Book Easter Eggs, I share with you comic book related “easter eggs.” An easter egg is a joke/visual gag/in-joke that a creator (typically a comic book artist) has hidden in a TV episode, or a movie or the pages of the comic for readers to find (just like an easter egg). They range from the not-so-obscure to the really obscure. So come check ’em all out and enjoy!

In Episode 4 of Disney+’s hit TV series, Hawkeye, we learned one of the downsides of Hawkeye’s current status quo in the Marvel Cinematic Universe. As explained by CBR’s Renaldo Matadeen, “In this Hawkeye episode, Kate visits Clint to ensure he doesn’t spend the holiday season alone, as she wants to help him fulfill his mission. However, as they bond, Clint admits he’s in a precarious position because he’s running out of trick arrows, which makes his superhero career a lot more difficult.

He explains the trick arrowheads are depleted, which is why he’s been recovering them from the field and why he needs Kate’s help in getting his stash back from the NYPD after battling Echo’s thugs in the last episode. It’s not like the old days with SHIELD or even Tony Stark around to replenish; Clint only has a limited supply, which makes him more vulnerable than ever as he juggles so many jobs on this trip.

Kate’s stunned because, like Hawkeye viewers, she assumed he had an infinite supply, which seemed to be the case in previous Marvel Cinematic Universe movies. Luckily, she uses some of the LARPer cops to help get the arrowheads back, but even then, Clint admits he needs special arrow shafts, thus he simply cannot afford to lose either component for his quiver.”

The reasons why the LARPers were able to help Kate out was because one of them was a cop (back when he was forced to participate in a LARP in Episode 2, Clint learned that a lot of the LARPers were cops and firefighters). She got the arrows out of evidence and brought them to Hawkeye in a really nice bag that her wife had gotten her. She was hoping that Clint would have a bag of his own to carry the arrows, but he did not, so he had to borrow hers and promise to return it unharmed. It had the name “Bombshell” written on the bag, which is presumably her codename as a LARPer. It is also a clever reference to one of Hawkeye’s most oddball foes.

Mark Gruenwald’s most famous legacy as a comic book creator will always be his love for continuity, which was expressed by the creation of the Official Handbook of the Marvel Universe, a project that he spearheaded in the early 1980s that basically still continues to this day. Even before hw worked in comics, Gruenwald was fascinated by continuity and put out a fanzine, Omniverse, on the subject.

However, Gruenwald was also known for being one of the biggest proponents of certain comic book theories, theories that showed him as one of the most thoughtful writers/editors of his generation. One of these theories was that heroes were only as good as their villains (the full theory is listed here) and as such, “So how many ‘good’ and ‘great’ villains can you think of? Does ever hero who has his/her own series have at least twelve of them? If not, says this editor, the writer will have to repeat him/herself a lot– or resort to ‘bad’ villains (those who don’t fit the above criteria). That’s why I’m on a campaign to get my writers to come up with new villains, at least every third storyline or so. That way, there will be new blood to replenish the tired old blood of villains who have lost one too many times to be taken seriously.”

In Hawkeye #3 (written and drawn by Mark Gruenwald, with finishes and inks by Brett Breeding), Hawkeye and his new ally, Mockingbird, were besieged by two new villains. 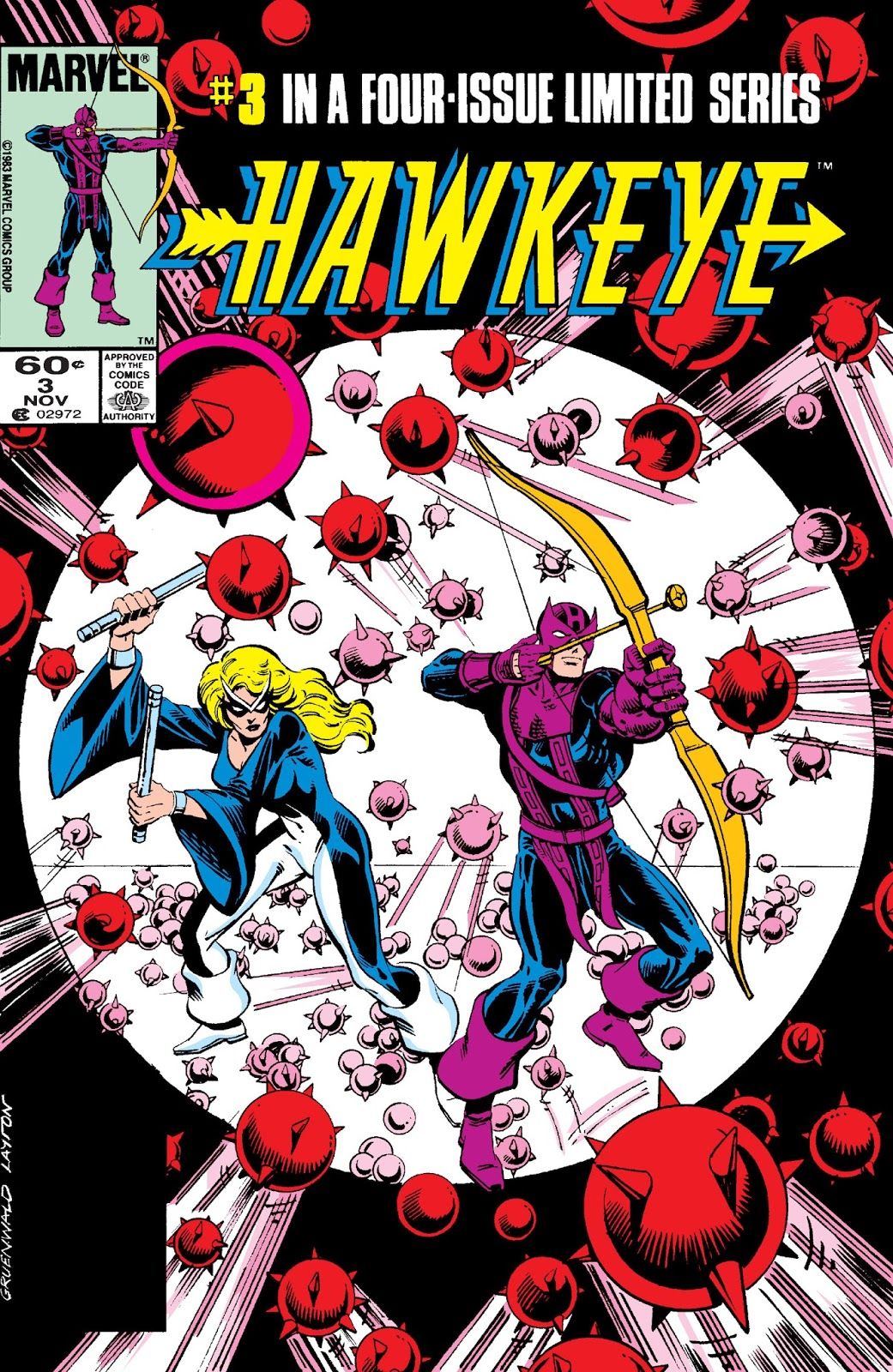 They first try to blow them up…. 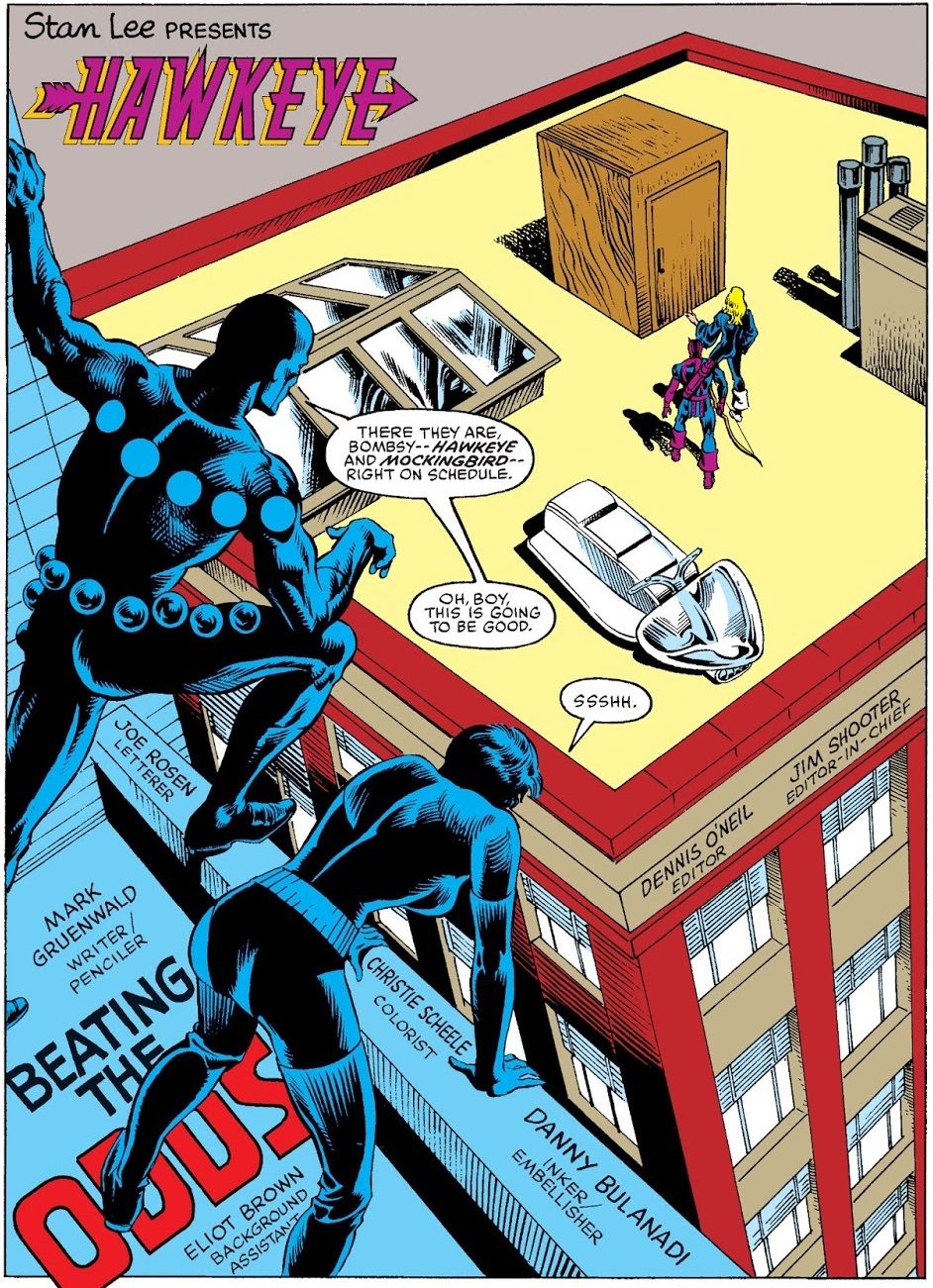 and we learn that their names are Oddball and Bombshell… 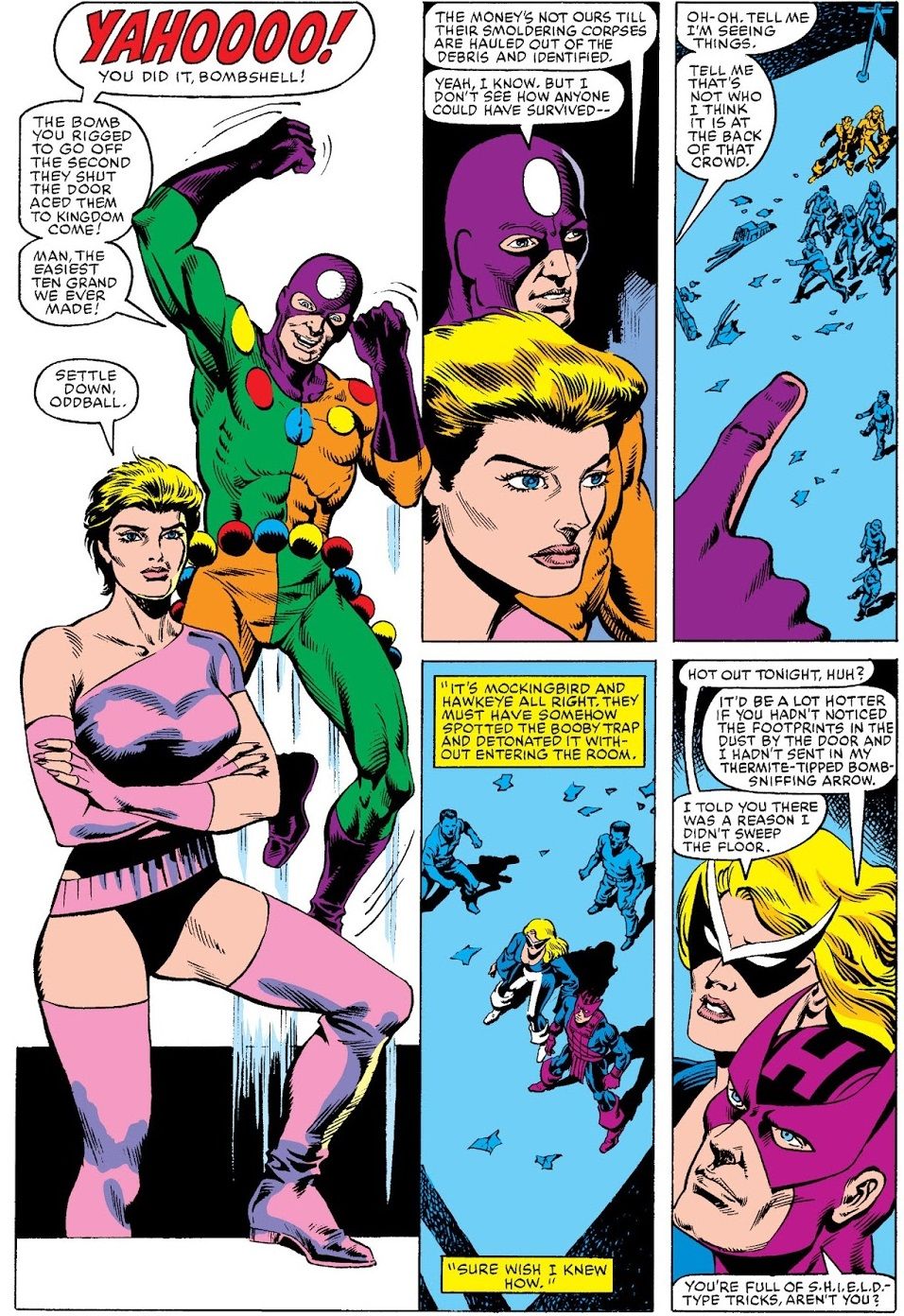 Hence the “Bombshell” name on the bag.

Later, in the pages of his Captain America run (specifically Captain America #317, art by Paul Neary and Dennis Janke), Gruenwald revealed that Bombshell and Oddball were part of a team of juggling villains known as the Death Throws (Gruenwald, like many comic book writers, enjoyed puns)… 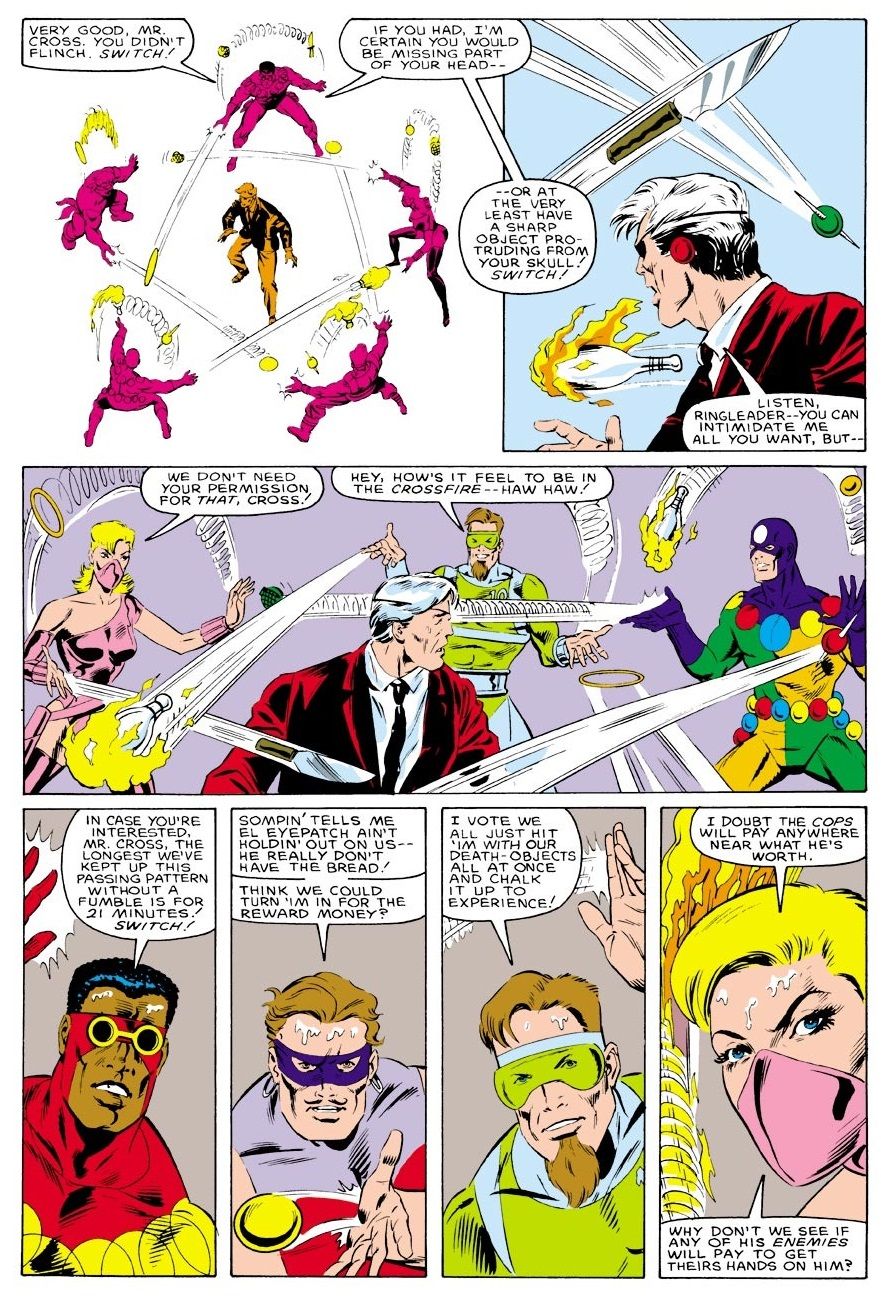 They rescue Crossfire in the comic book from police custody, but then torment him until he agrees to pay them what he owes them…

RELATED: Remember When Man-Thing Showed up on Dungeons and Dragons?

Bombshell was named by Mark Gruenwald’s assistant editor at the time, Mike Carlin (Carlin would go on to become a major editor at DC, including being the editor of the Superman titles during the Death of Superman).

Mike Carlin revealed to Jarrod Buttery in TwoMorrows’ Back Issue #56 that his “reward” for naming Bombshell was to be killed off in the series!

Hawkeye and Mockingbird are again attacked by Oddball and Bombshell in Hawkeye #3 while they are on the subway in New York. Hawkeye chases Oddball down to a moving subway car where Oddball takes a man based on Mike Carlin hostage. On the New Year’s Eve prior to this issue, Carlin and some friends had been coming home from a party when they were accosted on the subway by some crooks. One of them stole Carlin’s friend’s camera. The friend grabbed it back and then Carlin stepped up, just in time for the crook to pull a gun on him. Carlin jokingly shouted to the rest of the crowded car (it was New Year’s Eve, after all), “Hey, everybody. Look at this guy. He’s going to shoot me!” It either startled the crook or embarrassed him or whatever, but Carlin and his friend were able to push past them and get away at the next stop.

However, the fictional Mike Carlin did not do as well with his bravado… 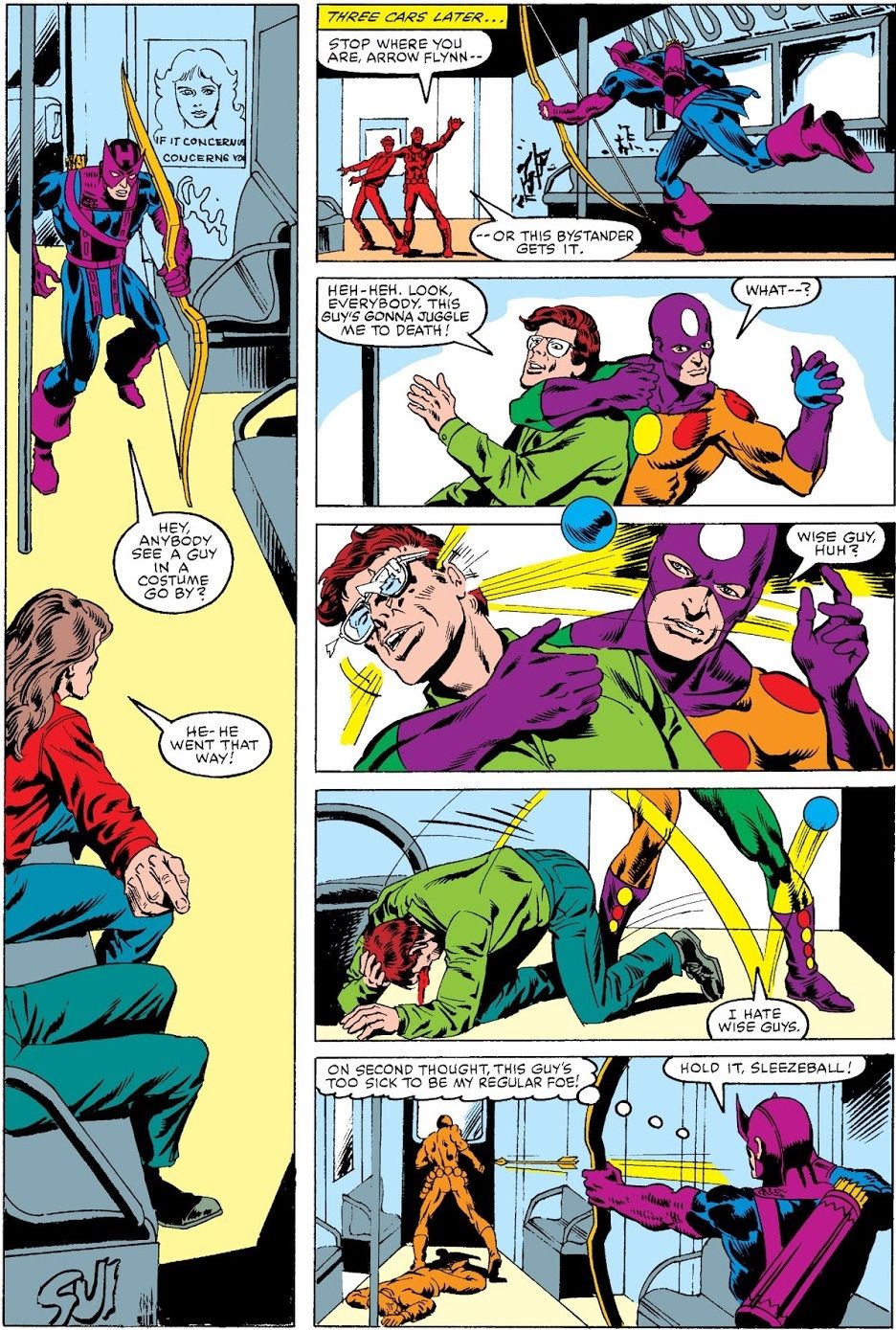 Thanks to my pal, Alan, for suggesting this one! If anyone else has a suggestion for a good comic book easter egg, drop me a line at brianc@cbr.com!

KEEP READING: What Did That New Mutant Just Say?!