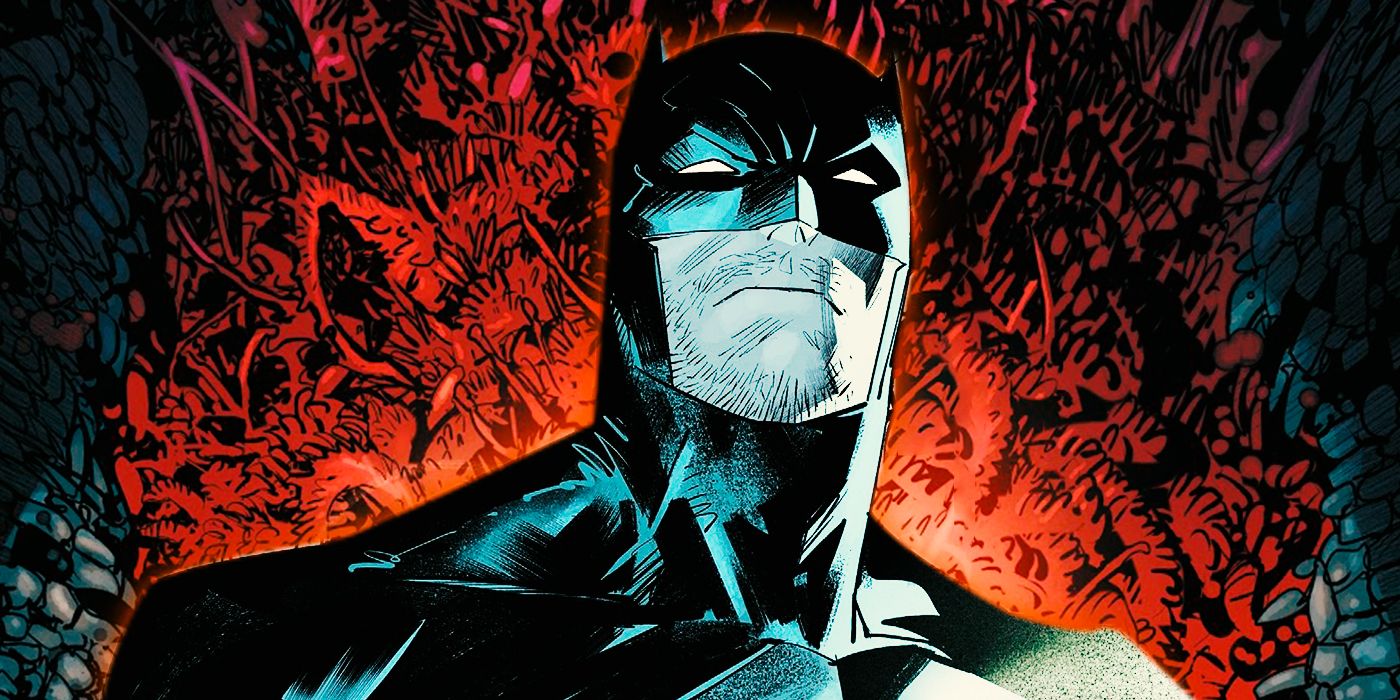 Batman is traditionally known as one of the most grounded and human heroes in comics. In a world of gods and monsters, the Caped Crusader stands out as one of the few who stand against powerful threats without the benefit of superpowers, as is reflected in the view the residents of Gotham City have of their resident protector.

Although the threat of Gotham’s “Fear State” still lingers in Detective Comics #1045 (by Mariko Tamaki, Dan Mora, Jordie Bellaire, and Aditya Bidikar), the menace of the Vile Parasite still remains. Eggs planted in the sewers of Gotham are overflowing into the streets above, threatening to cause a major disturbance to the city. This is something far beyond the usual costumed criminals that menace the city, but the residents don’t appear to be overly concerned.

Although they are smart enough to stay away from the horrifying creatures slowly emerging from below, they don’t appear to be particularly afraid. One couple that walks by the frightening display explains their nonchalance, and gives a new insight into how the people of Gotham view the Caped Crusader, as they simply label the paranormal activity as “Batman stuff.” 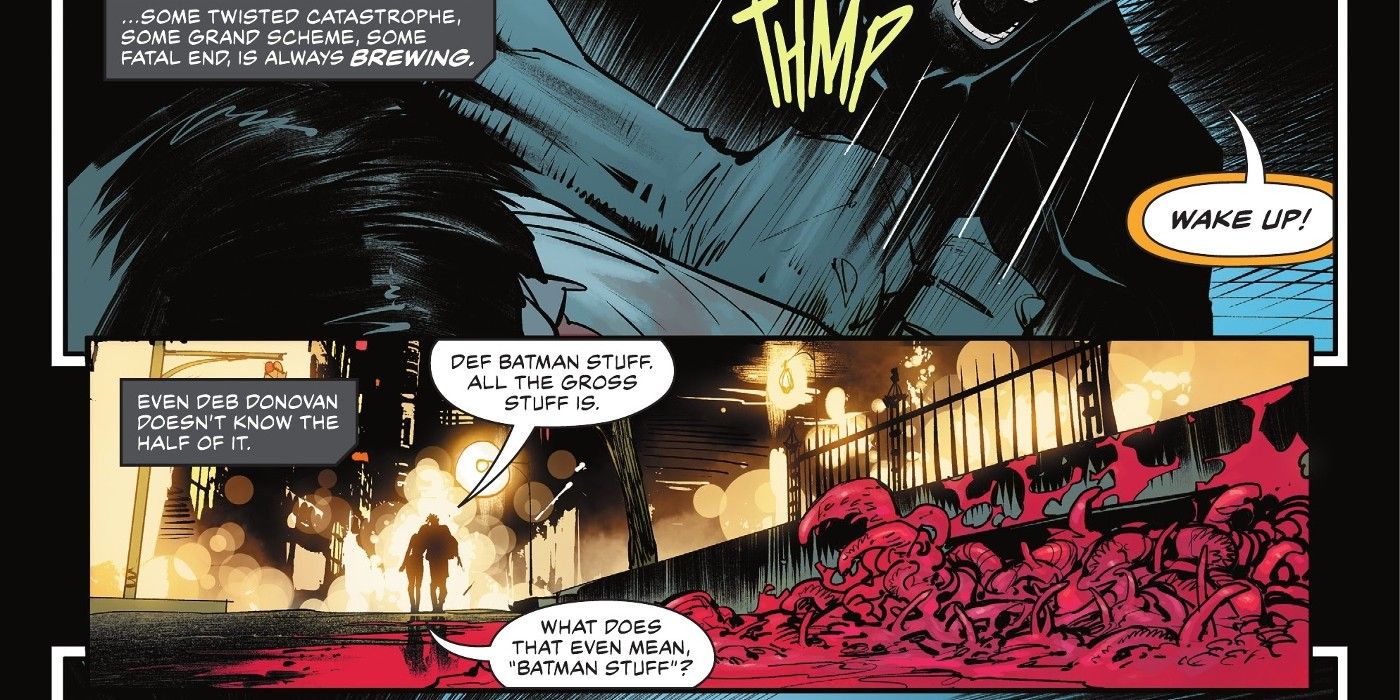 This idea comes around again at the end of the story when the conclusion of the Caped Crusader’s fight is published in the papers. The parasites formed into one massive monster that was impervious to Batman’s usual gadgets. The taser that stopped them individually in the sewers earlier isn’t strong enough for their powers combined. It took Nightwing shooting the amalgamated monstrosity with the laser of a Magistrate aircraft to finally defeat it. Even after that close call, when that same couple sees the news, the one that commented about the parasite being “Batman stuff” earlier now feels that his suspicions were confirmed.

Our understanding of Batman’s world is that it doesn’t normally contain literal monsters. Joker, Penguin and Two-Face are all more grounded gang leaders, even with their tricks and quirks. The more outlandish individuals who possess actual powers, such as Poison Ivy and Mr. Freeze, still manage to stay grounded in reality, even if they require creative solutions to combat their abilities.

Monsters are more along the lines of what the Justice League deals with. The likes of Superman and Wonder Woman have the strength to combat beings like the Vile Parasite’s final form. In this instance, Batman could have used a helping hand to end the threat. Still, Batman is a valued member of the League and regularly helps them fight against monstrous threats, which likely contributes to the way the citizens of Gotham almost automatically believe in him and trust him to handle any and all threats against the city, including literal monsters. 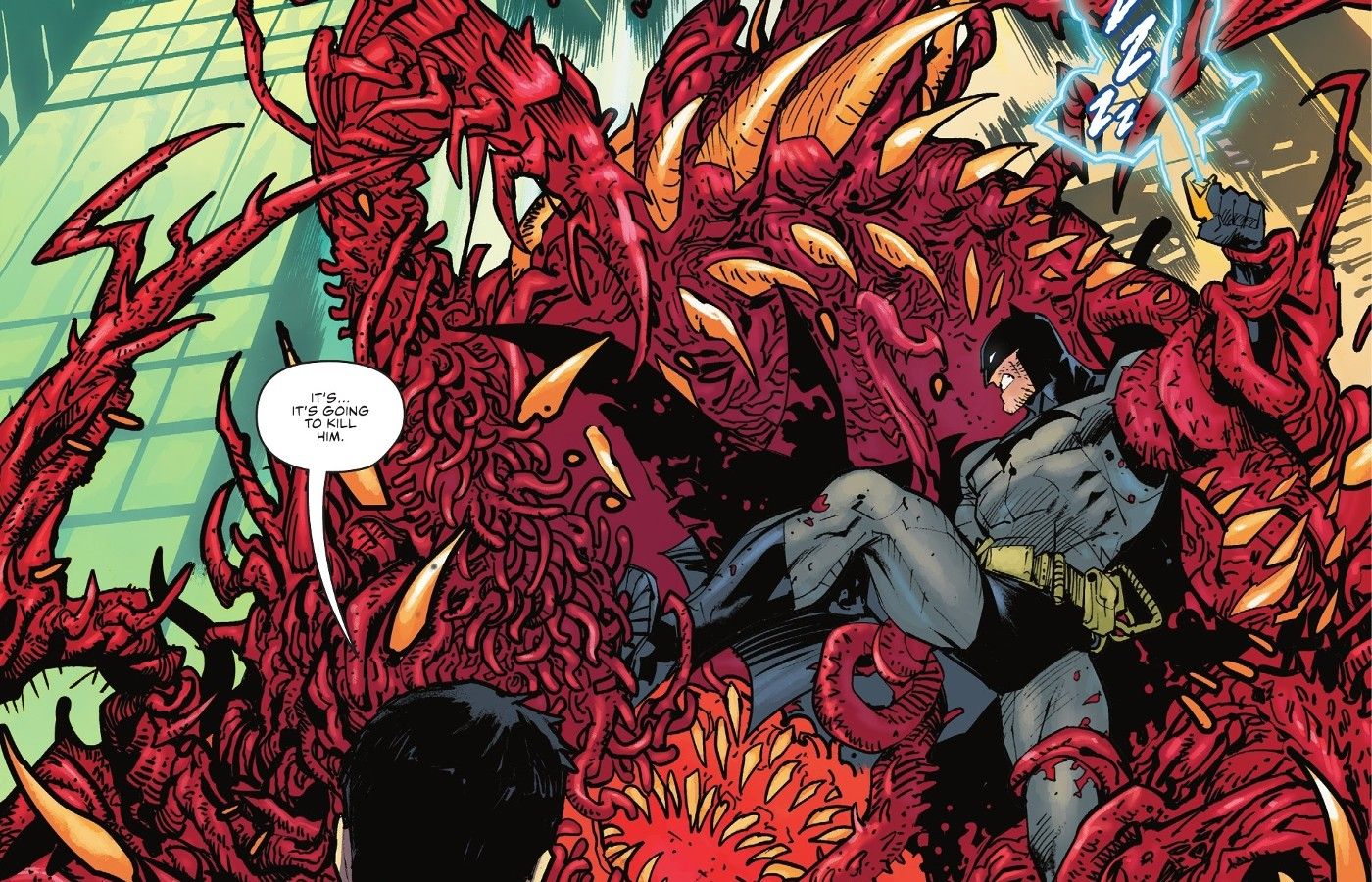 Batman’s mysterious and secretive nature allows Gotham’s collective imagination to run wild with how much the Caped Crusader can reasonably handle. The fact that he always triumphs over even the greatest of threats probably leads them to think he is somehow invincible, even though beneath the bravado the Dark Knight is only human.

It is actually a good thing that Gotham sees their protector as an invincible superhero, one whose powers equal those of his fellow Justice Leaguers. If they believe that he can do anything, then they aren’t as terrified when something particularly formidable emerges to plague the city, like the Vile Parasite. Though this could lead them to place too much faith in their Dark Knight detective, at least it allows them to sleep peacefully at night.

Feeling Froggy: the Oddball of the Week, Frog-Man