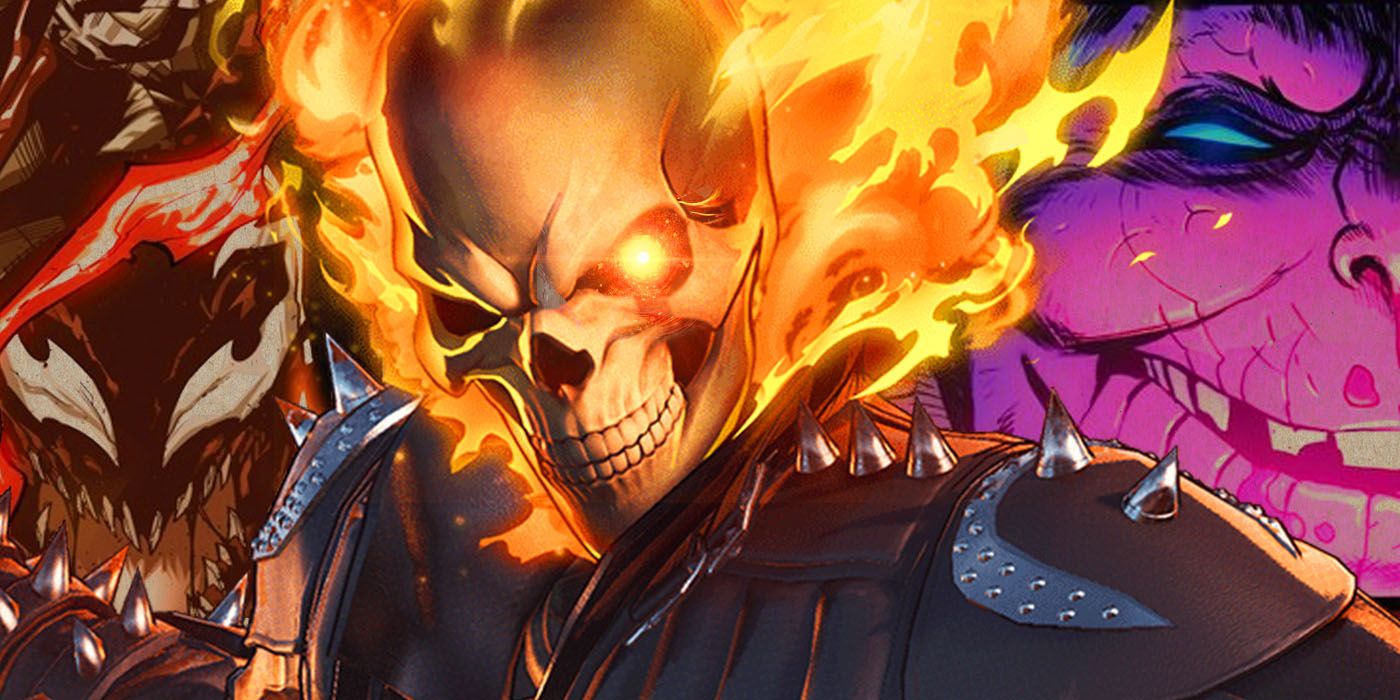 Today, we look at five characters in the Marvel Universe who were able to withstand Ghost Rider’s Penance Stare.

In Drawing Crazy Patterns, I spotlight at least five scenes/moments from within comic book stories that fit under a specific theme (basically, stuff that happens frequently in comics). Note that these lists are inherently not exhaustive. They are a list of five examples (occasionally I’ll be nice and toss in a sixth). So no instance is “missing” if it is not listed. It’s just not one of the five examples that I chose.

Ghost Rider’s Penance Stare is one of his most powerful weapons. From Marvel’s official website biography of Ghost Rider, the Penance Stare is described as, “His chief weapon is called the Penance Stare, an ability picked up from his brother, Danny Ketch. By gazing into the soul of the guilty, Ghost Rider causes the affected party to relive all the harm they’ve done to anyone else over the years. This stare leaves its victim permanently catatonic.”

However, it doesn’t always work that way.

In 2012’s Venom #14 (by Rick Remender, Tony Moore and Val Staples, with plotting assists from Jeff Parker and Rob Williams), Blackheart had successfully brought Hell to Las Vegas and a group of disparate superheroes were trying to take him down. As I pointed out in a recent article, the way that the heroes tried to do so was for the Red Hulk to merge with Venom’s symbiote and also gain the Spirit of Vengeance.

However, during the attack on Blackheart by Ghost Hulk Venom Rider (or whatever you want to call the combined hero), the hero had the demonic son of Mephisto on the ropes until he used the Penance Stare and showing a demon all of his misdeeds actually served to POWER UP Blackheart! 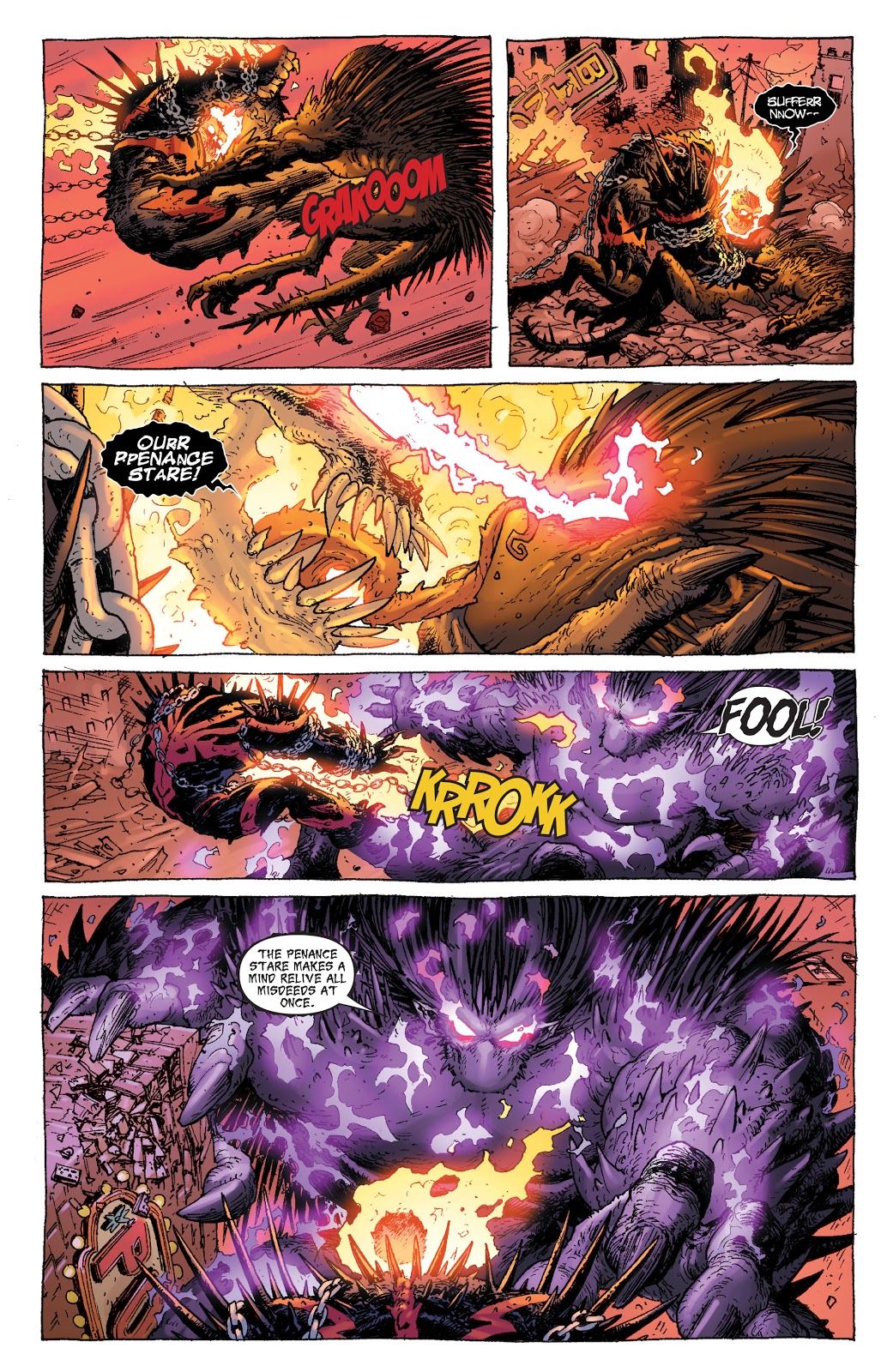 Years later, Venom, Ghost Rider and Red Hulk were once again working together, but this time as a regular team in a variation of the Thunderbolts. These volatile personalities often led to conflicts within the group and one such incident occurred in Thunderbolts #23 (by Charles Soule, Kim Jacinto and Israel Silva), when Ghost Rider and Venom came into conflict and Ghost Rider used the Penance Stare… 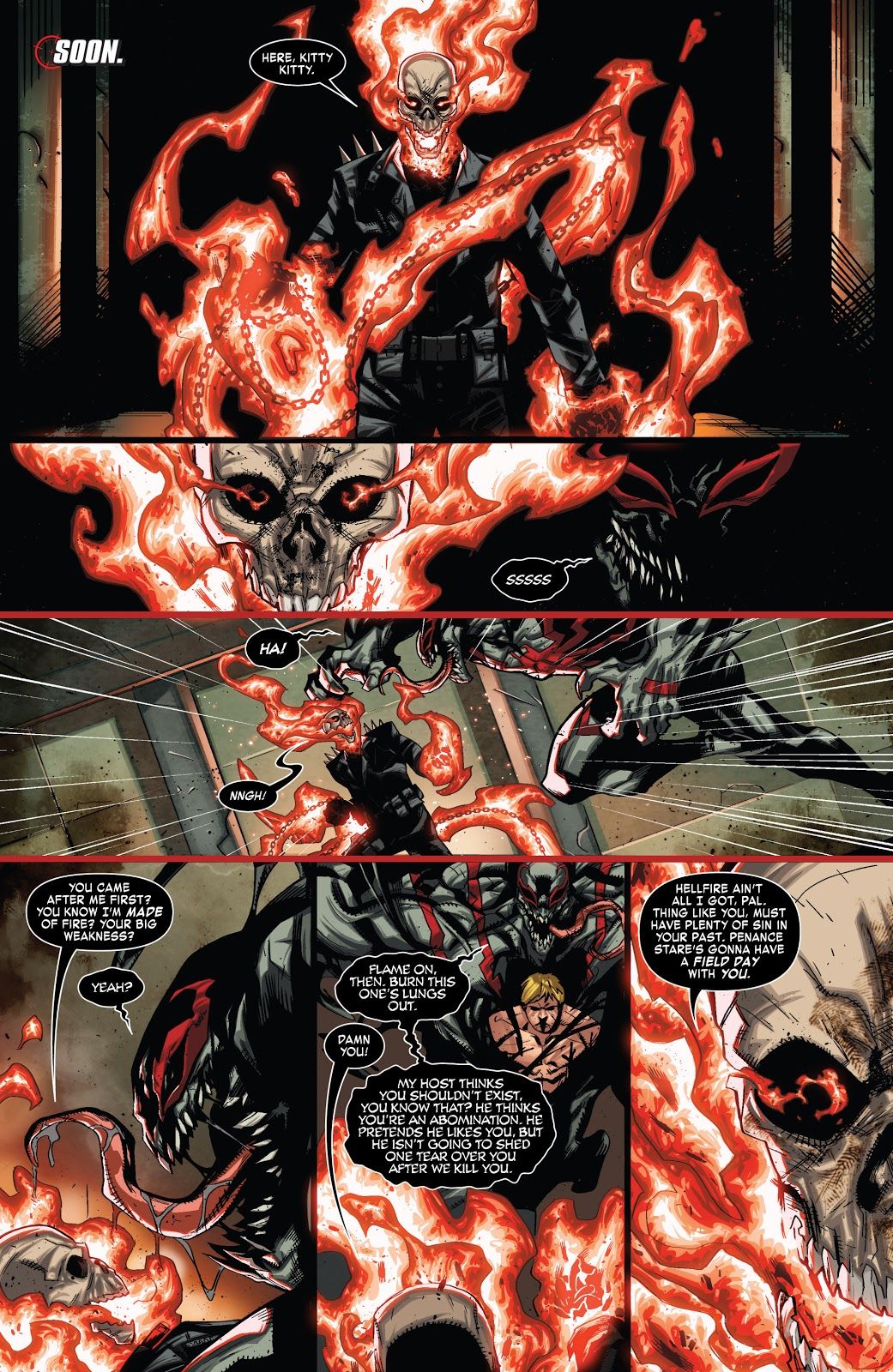 And shockingly, Ghost Rider was overwhelmed by just HOW MUCH messed up stuff that the Venom symbiote had done over the years… 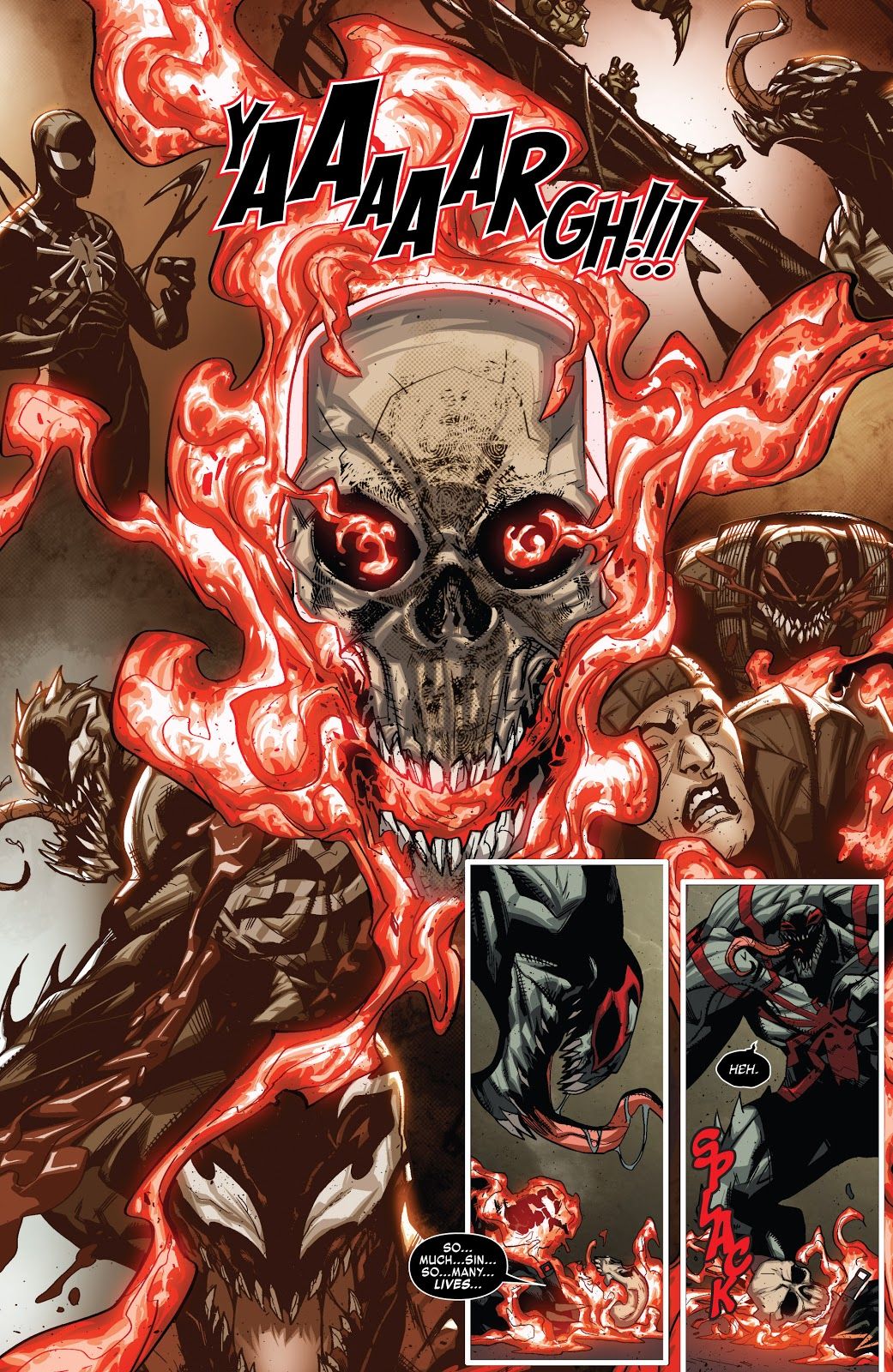 Six issues later, in Thunderbolts #29 (by Ben Acker, Ben Blacker, Jacinto and Silva), it was time for another member of the Thunderbolts to turn on the others. This time it was the Punisher, who sought out some mystical weapons that would allow him to take on the Ghost Rider and actually do some real damage. In their initial fight, Ghost Rider used his Penance Stare on the Punisher… 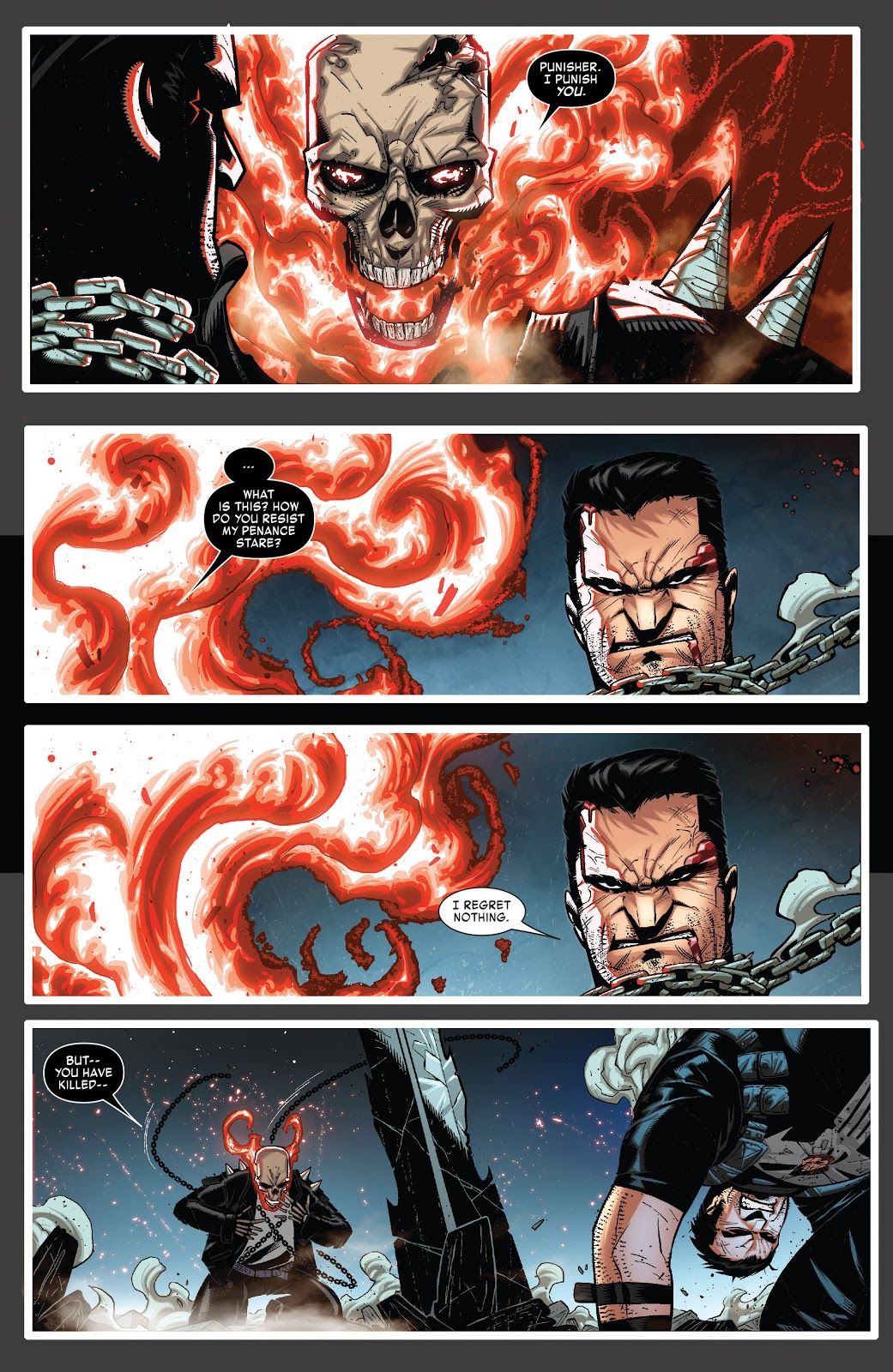 As it turned out, the Punisher’s sense of purpose in his mission was so great that he did not actually feel any remorse for any of the killings that he has done over the years as he truly believes that he killed no innocents and that it was all worth avenging the death of his wife and children and thus he had no penance to serve… 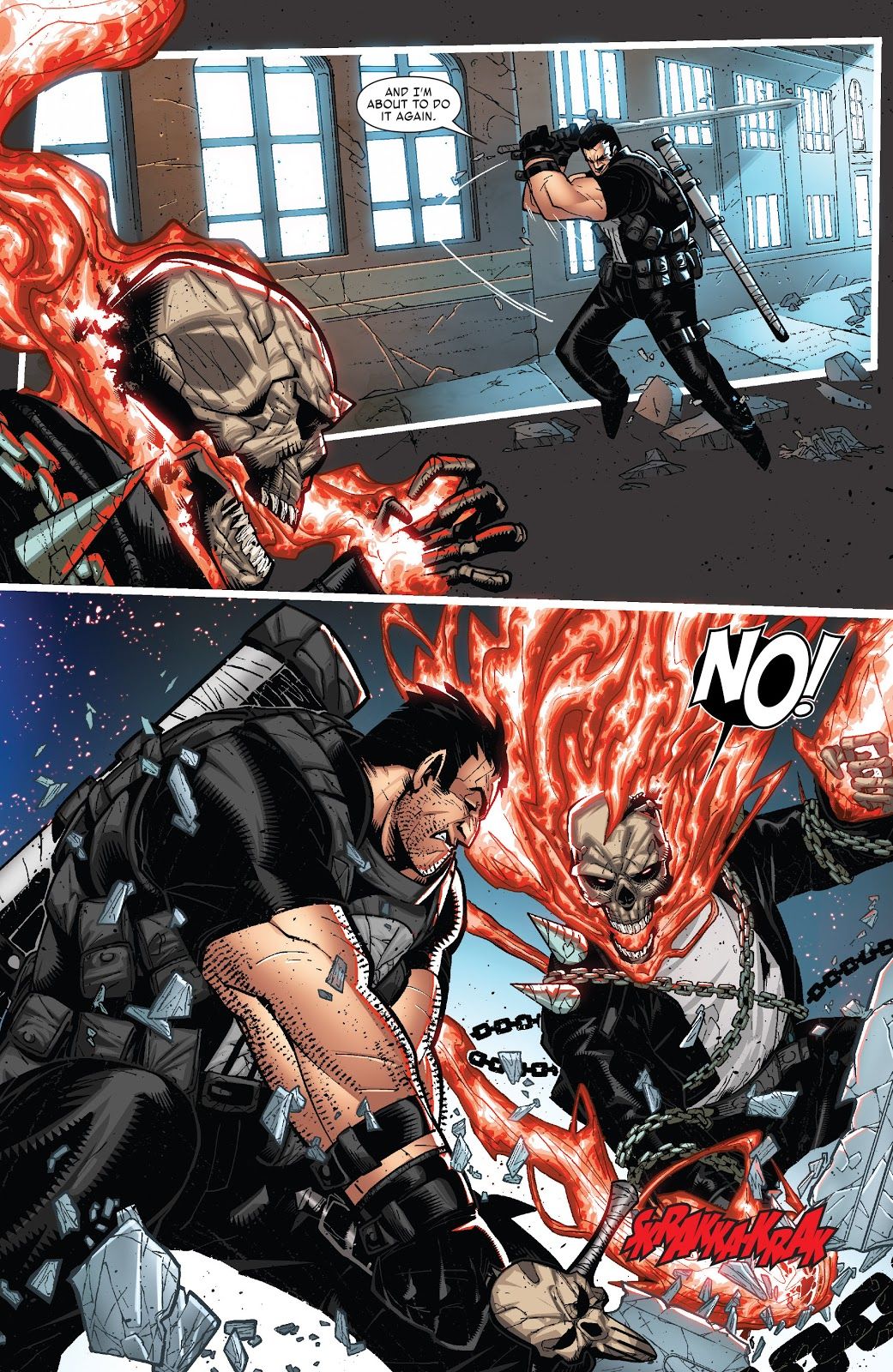 He then attacked Ghost Rider with a mystical weapon, which Ghost Rider obviously did not expect to see being used against him by the Punisher, of all people (although, amusingly enough, there was a period where the Punisher was a literal avenging angel, so for a time, the Punisher had a similar approach to the universe as the Ghost Rider, just as an angel as opposed to a demon).

RELATED: Tim Burton’s Batman Was So Big Even Marvel Couldn’t Stop Talking About It

An amusing confrontation involving the Penance Stare occurred in Absolute Carnage: Symbiotes of Vengeance #1 (by Ed Brisson, Juan Frigeri, Dono Sanchez-Almara and VC’s Joe Caramagna), where Ghost Rider encounters Carnage and attempts to use the Penance Stare on the sadistic symbiote-infused serial killer… 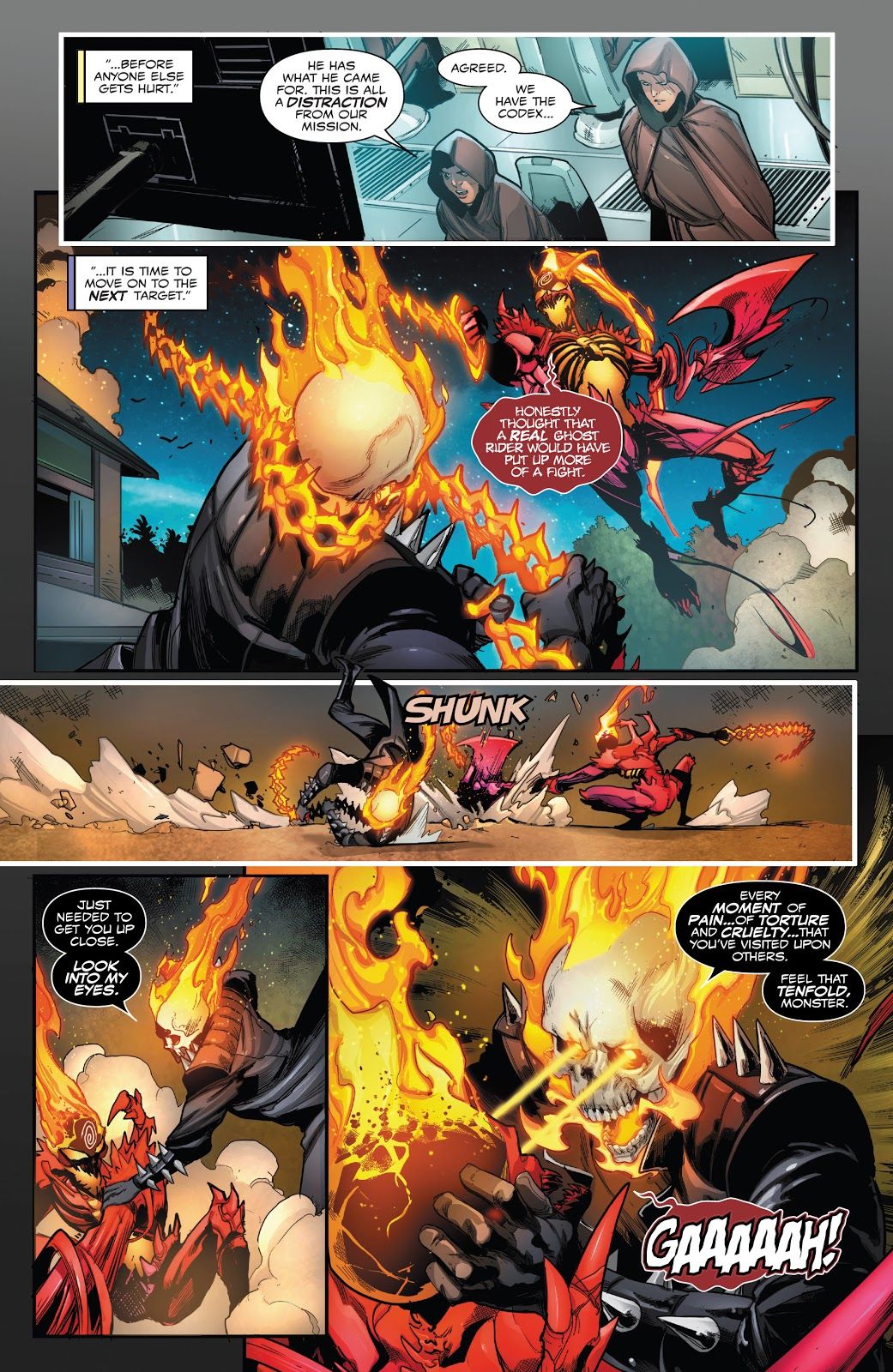 The problem, though, which Carnage was so willing to explain, is that Ghost Rider had specifically tried to use this on Venom before and it did not work (and backfired horrifically), so why would he think that it would work on Carnage? 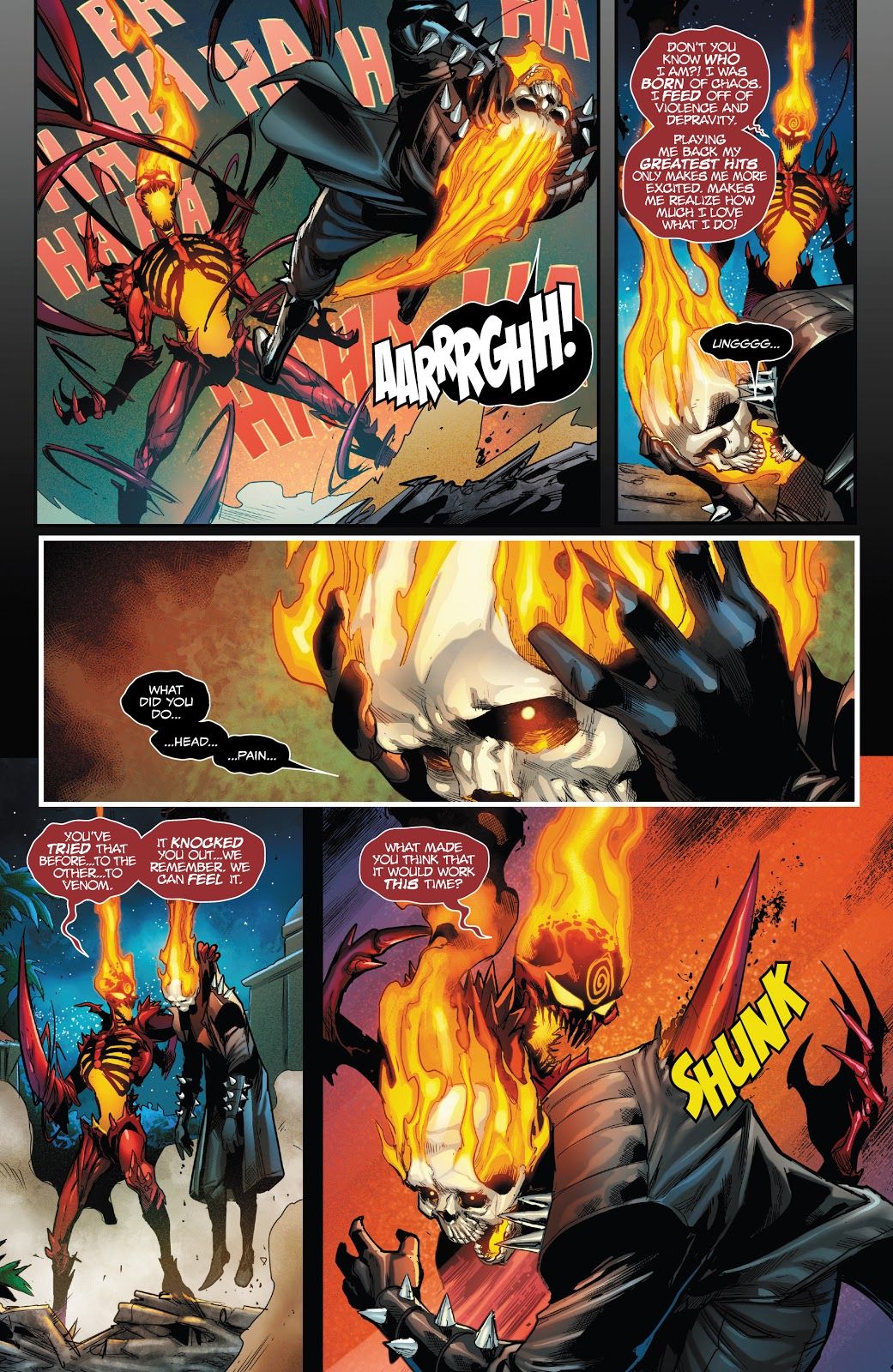 The most recent failure of the Penance Stare actually ALSO involves a symbiote. It all went down in Savage Avengers #21 (by Gerry Duggan, Patch Zircher, Java Tartaglia and VC’s Travis Lanham) where Conan the Barbarian had sort of merged with a symbiote weapon so that Conan and the symbiote, who both held a grudge against the sorcerer Kulan Gath, would gain their vengeance together. Ghost Rider, meanwhile, was dealing with some Kulan Gath issues as well and confronted Conan to learn where he could get to Kulan Gath. The two battled and in the middle of the fight, Ghost Rider broke out the Penance Stare on Conan… 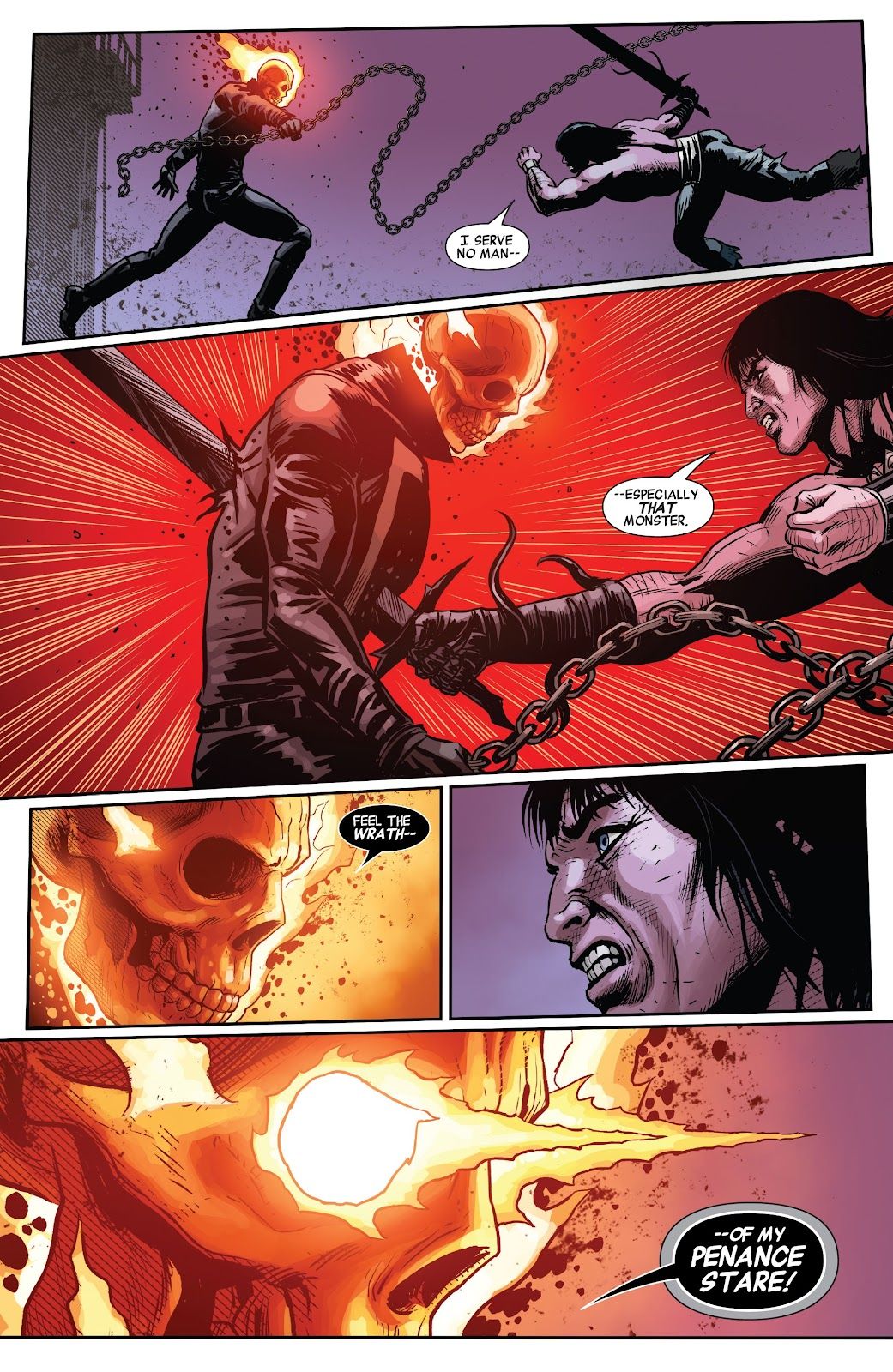 The problem for Ghost Rider was likely tied to the symbiote, but whatever the reason, Conan was able to get past the Penance Stare easily… 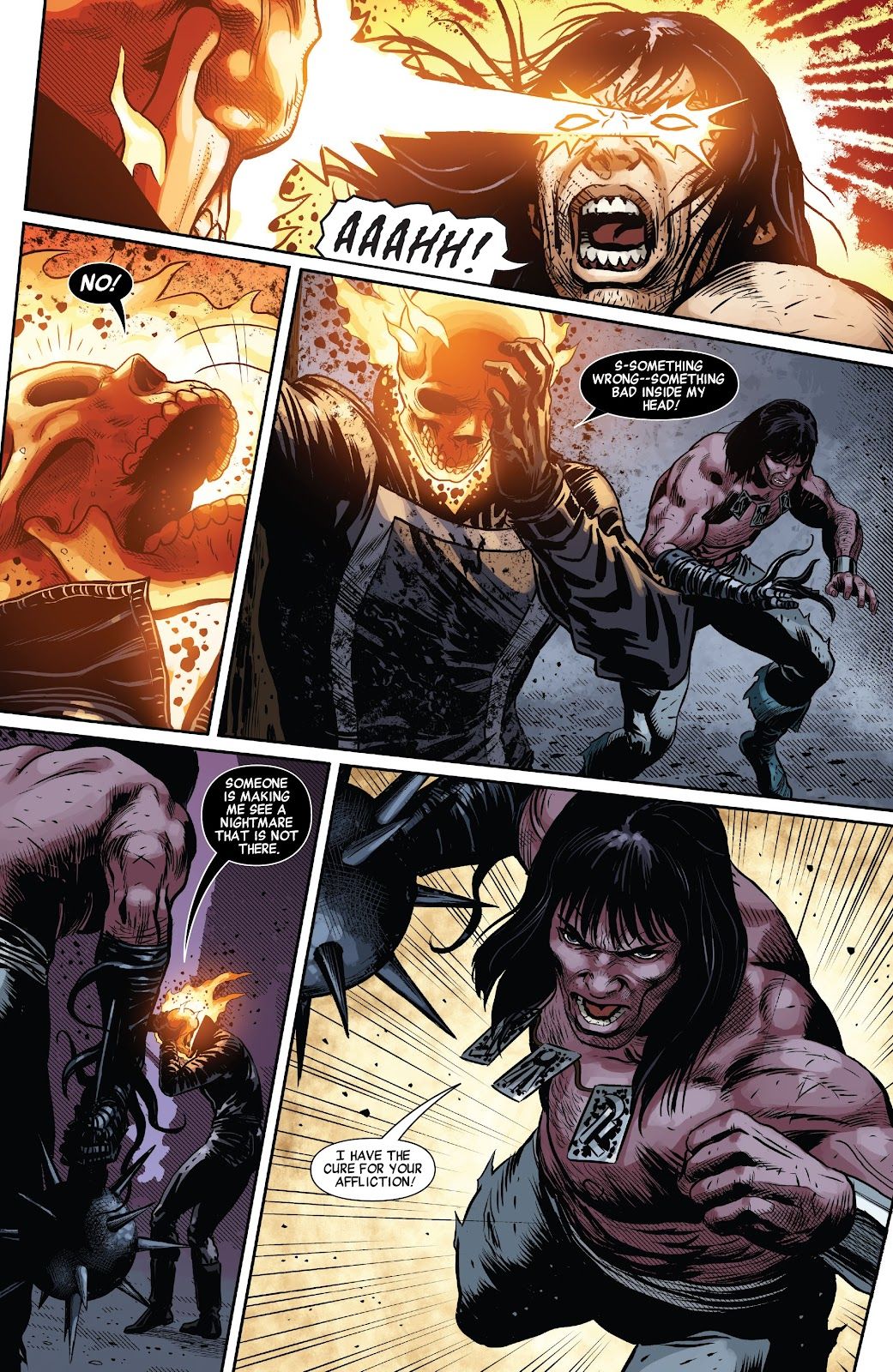 Conan was even able to later destroy Ghost Rider’s skull, but the resulting side effects of that action led to Conan being sent back in time to the Hyborean Age.

If anyone has suggestions for a future Drawing Crazy Patterns, drop me a line at brianc@cbr.com!

KEEP READING: The 5 Worst Supervillain Reveals Were Disappointing for One Weird Reason

Spider-Man: Andrew Garfield Should Get A Third Solo Movie