Today, we look at how the heroes of the DC Universe were forced to step up and answer Superman’s fan mail once the Man of Steel died fighting Doomsday.

And now, a bit late, Day 13 will be opened (once opened, the door will feature a panel from the featured story)… 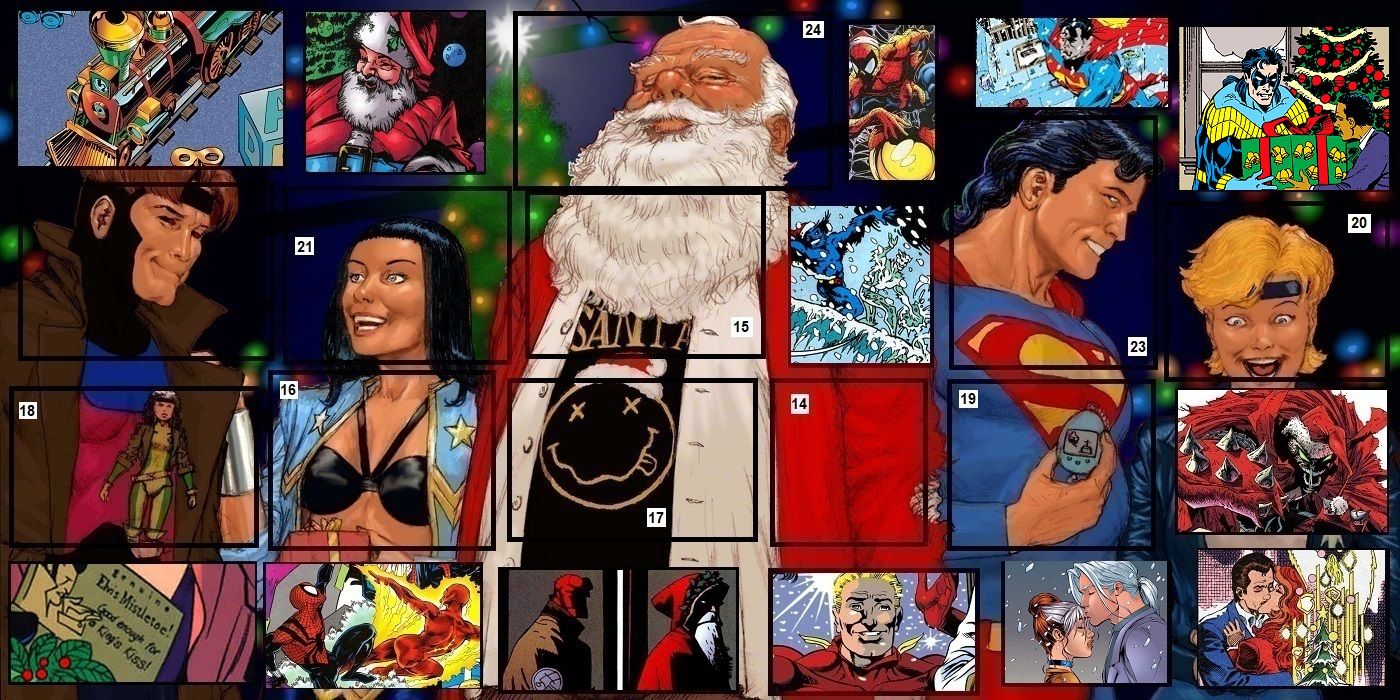 Today, we look at 1992’s “Metropolis Mailbag II” by Dan Jurgens and Brett Breeding in Superman #76.

One of the oddest things, in retrospect, about the Triangle era of the Superman titles (where the four books worked as essentially one long narrative, with a small triangle on the covers to let you know what order to read the various comic books in), is how the setup really warps the narrative from an issue-to-issue basis of any given series. In other words, if you read an issue of Action Comics and then read another issue of Action Comics, you’d inherently be missing THREE comic books’ worth of story between each issue. That’s not a problem, of course, but it’s just kind of weird when you pick up literally the next issue after Superman died in Superman #75 and Superman #76 is SO FAR later in the overall narrative (as Superman has already been buried by the time the next issue of Superman came out!).

Just a few days ago, I did a spotlight on the FIRST Metropolis Mailbag, which took place the year earlier, in Superman #64 (by Jurgens and Jackson Guice) where the concept was introduced – that every year, when people write letters to Santa Claus, they ALSO write letters to Superman and he takes the time to answer as many as he can in one night (as obviously otherwise, it would be a fulltime job just answering letters and not even the Man of Steel can do all of that). The issue opens with a group of DC heroes (all wearing their Superman armbands that were included in the bagged edition of Superman #75. I would say “synchronicity,” but it wasn’t like DC was actually SELLING the armbands, ya know? Batman informs the heroes that there is a special mission that they need to fulfill in honor of Superman.

First, we check in with Lois Lane, who is obviously not handling the death of her fiancee well. The bigger issue for Lois, beyond just the death of her fiancee, is the fact that no one KNOWS that her fiancee is dead, because no one else knows that Superman and Clark Kent are one and the same and so what can she even do? There is a con woman earlier in the issue (or perhaps just a deranged woman) who claims to be Mrs. Superman and Lois is hit with some tangible pain over the fact that she almost WAS Mrs. Superman and she can’t very well tell anyone.

“Luckily,” when she visits Clark’s apartment, his parents have flown out and they all can console each other since they all share the secret of Clark Kent’s other identity… 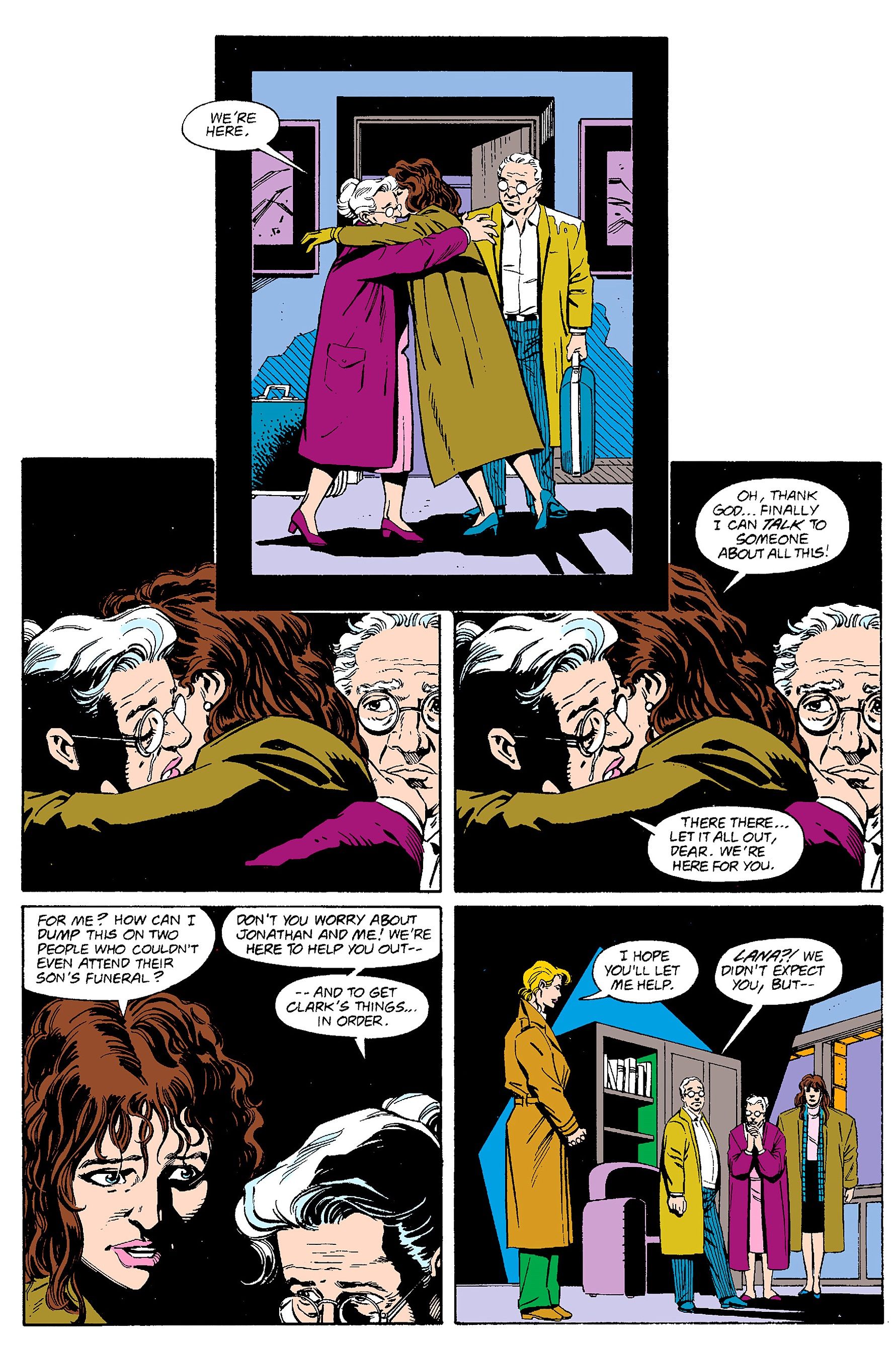 The superheroes then get to the mail office and they are shocked by how many letters there, and Guy Gardner, of course, gets to be a jerk about it, as is his wont… 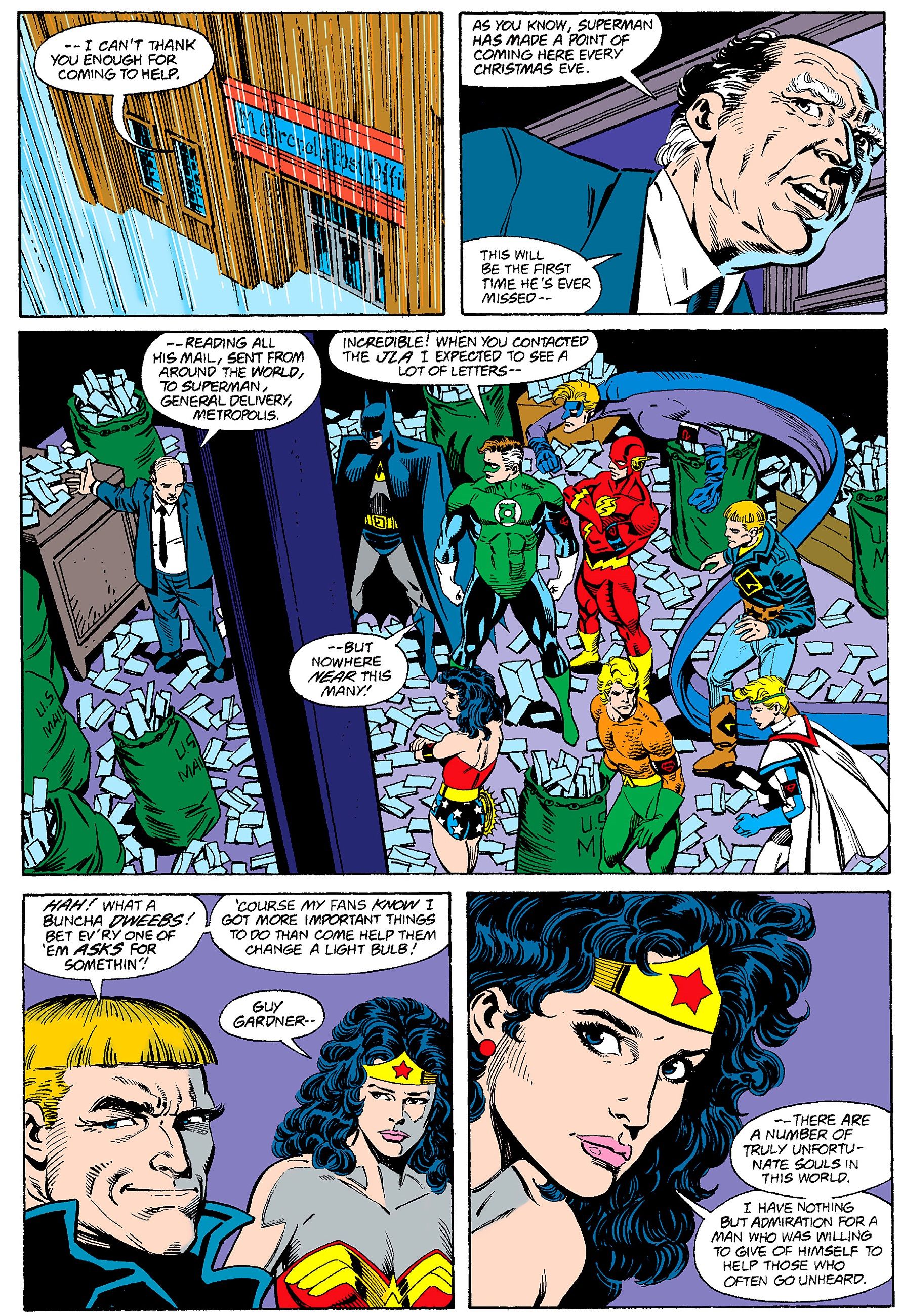 The hairstyles sure tell you that it is the early 1990s, as there are mullets galore, with Nightwing and Aquaman rocking them in back-to-back panels. The heroes, though, realize that this going to be more difficult than the expected and it is interestingly enough, Guy, who just dives in and decides to address one of the letters first… 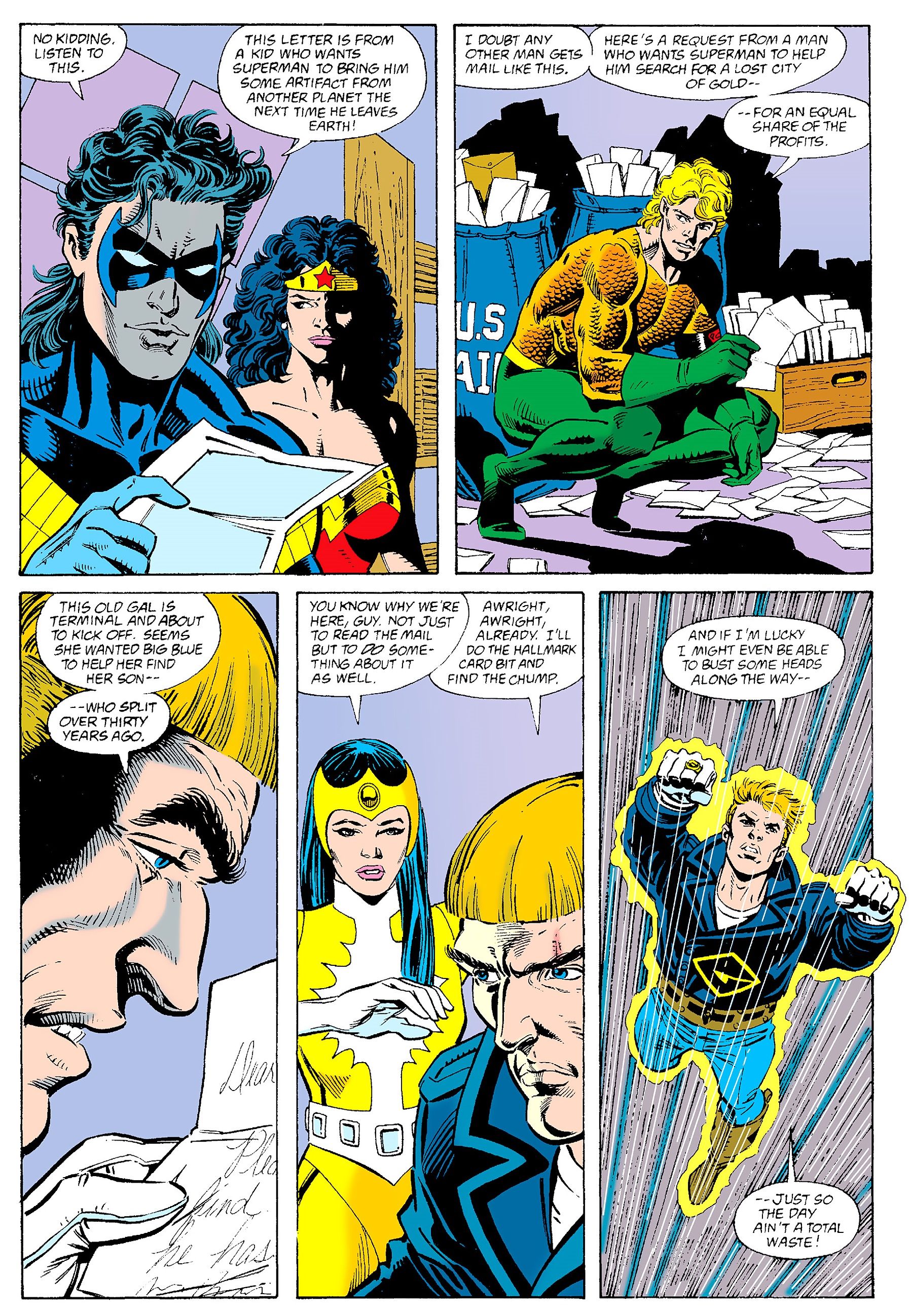 One of the main letters the heroes decide to address is a thank you letter from a woman whose family was saved by Superman from the rampage of Doomsday, even though it left their home destroyed. This is the Anderson family that had been prominently displayed in the middle of “The Death of Superman,” as the sort of point of view characters… 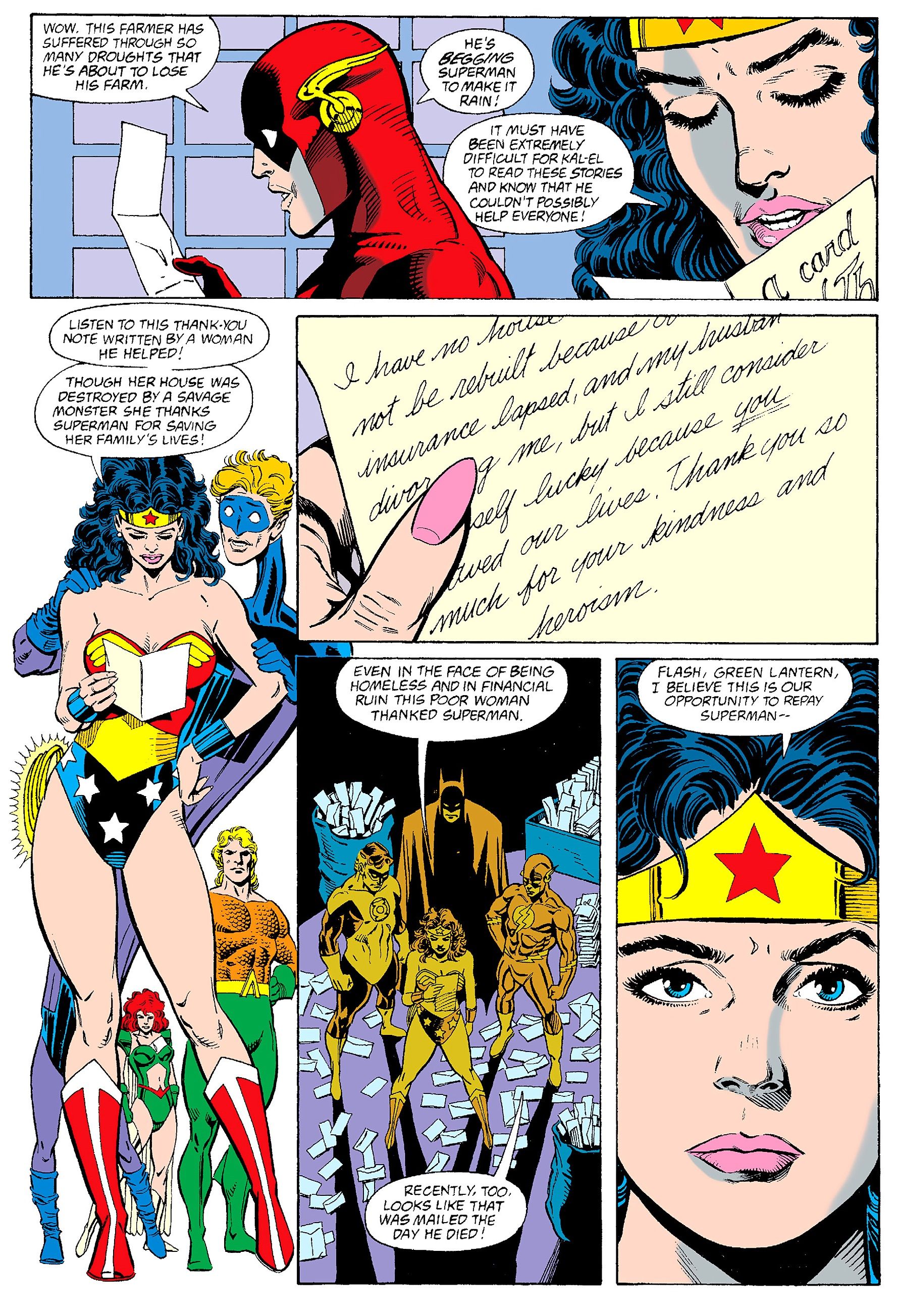 The main point of view character was Mitch Anderson, the older son who is angry and looks at Superman as “uncool,” and obviously he has to change his tune when Superman saves him and his family on the way to losing his own life. Mitch has run away to Metropolis to talk to SOMEone who actually knew Superman. Jimmy Olsen and Bibbo Bibbowski take Mitch in and the teen also expresses his anger over the fact that his father left his family and so when the family needed them the most, only Superman was there for them…. 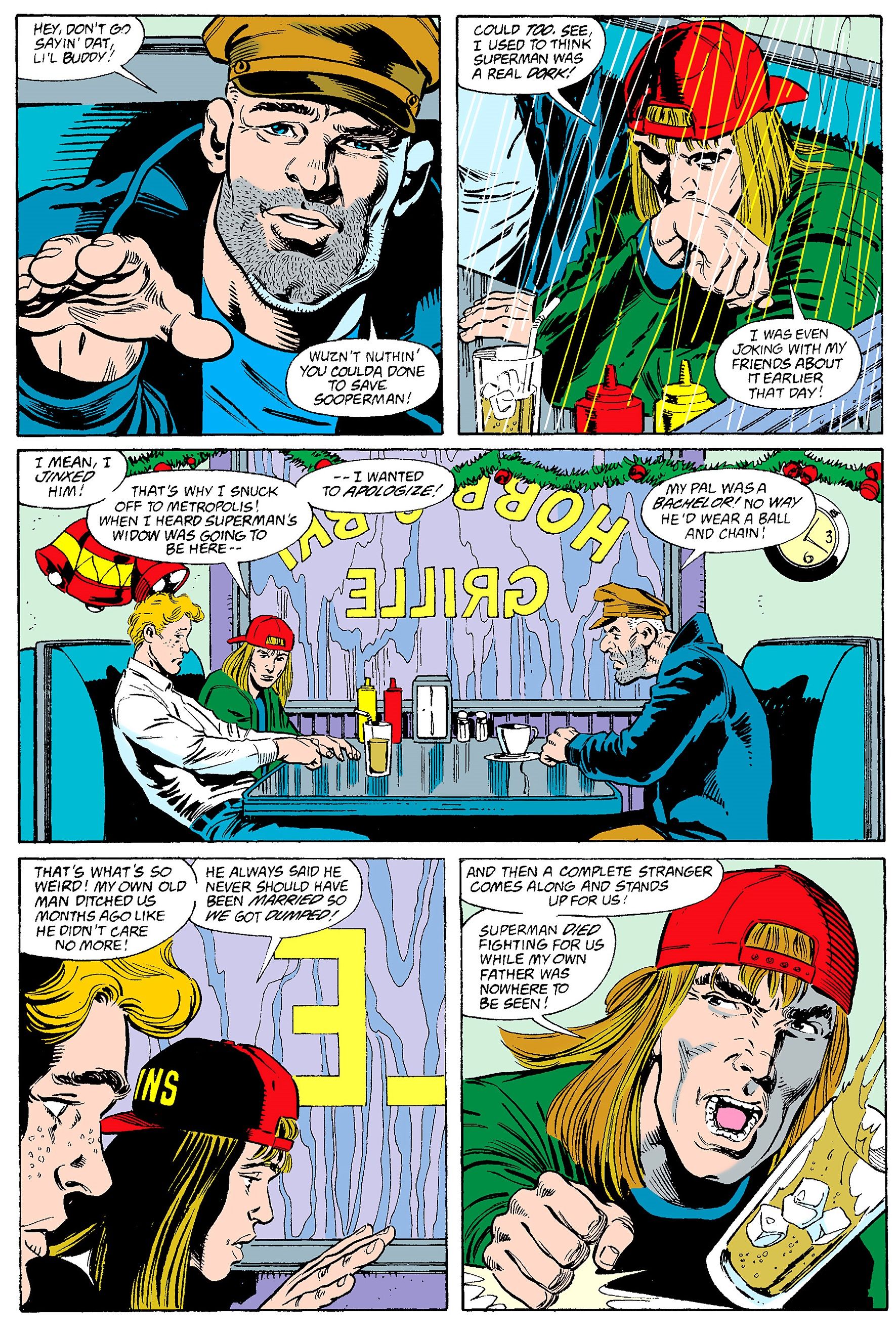 Mitch travels to the statue that was built over Superman’s grave and he comes to terms with everything while the heroes are rebuilding the Anderson’s home and Wonder Woman has found Mitch’s dad and reunites him with his family…. 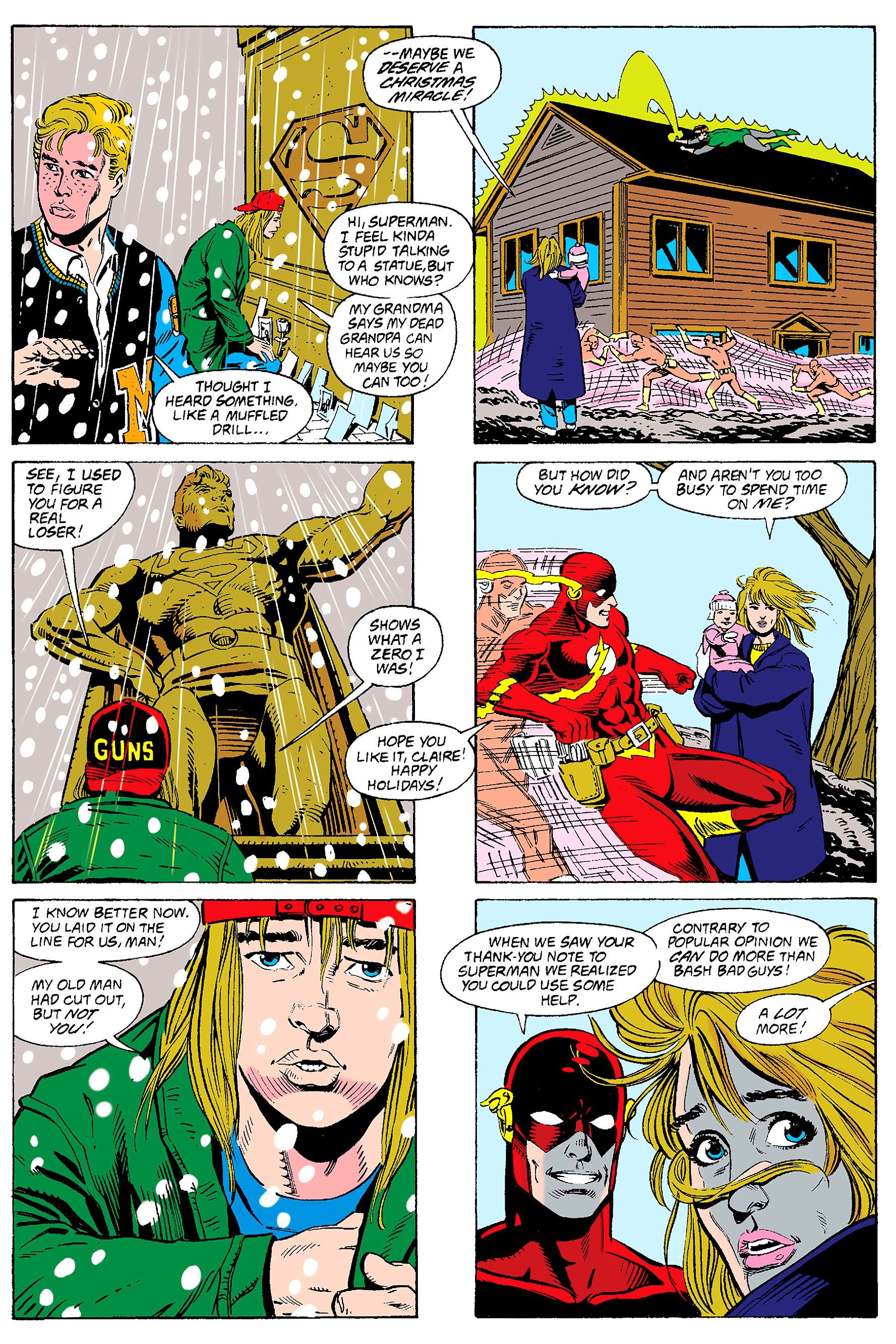 It’s a touching, sad issue with a disturbing cliffhanger that suggests that Project Cadmus has stolen Superman’s body (they had – they used it to clone Superman and that later became the new Superboy who debuted during the Reign of the Supermen followup storyline that eventually led to the return of Superman).

Oh, by the way, of course Mitch later finds out that he has superpowers and he then becomes a superhero because, well, of course he does. It’s comics, every bystander eventually gets superheroes. It’s just an expected thing.