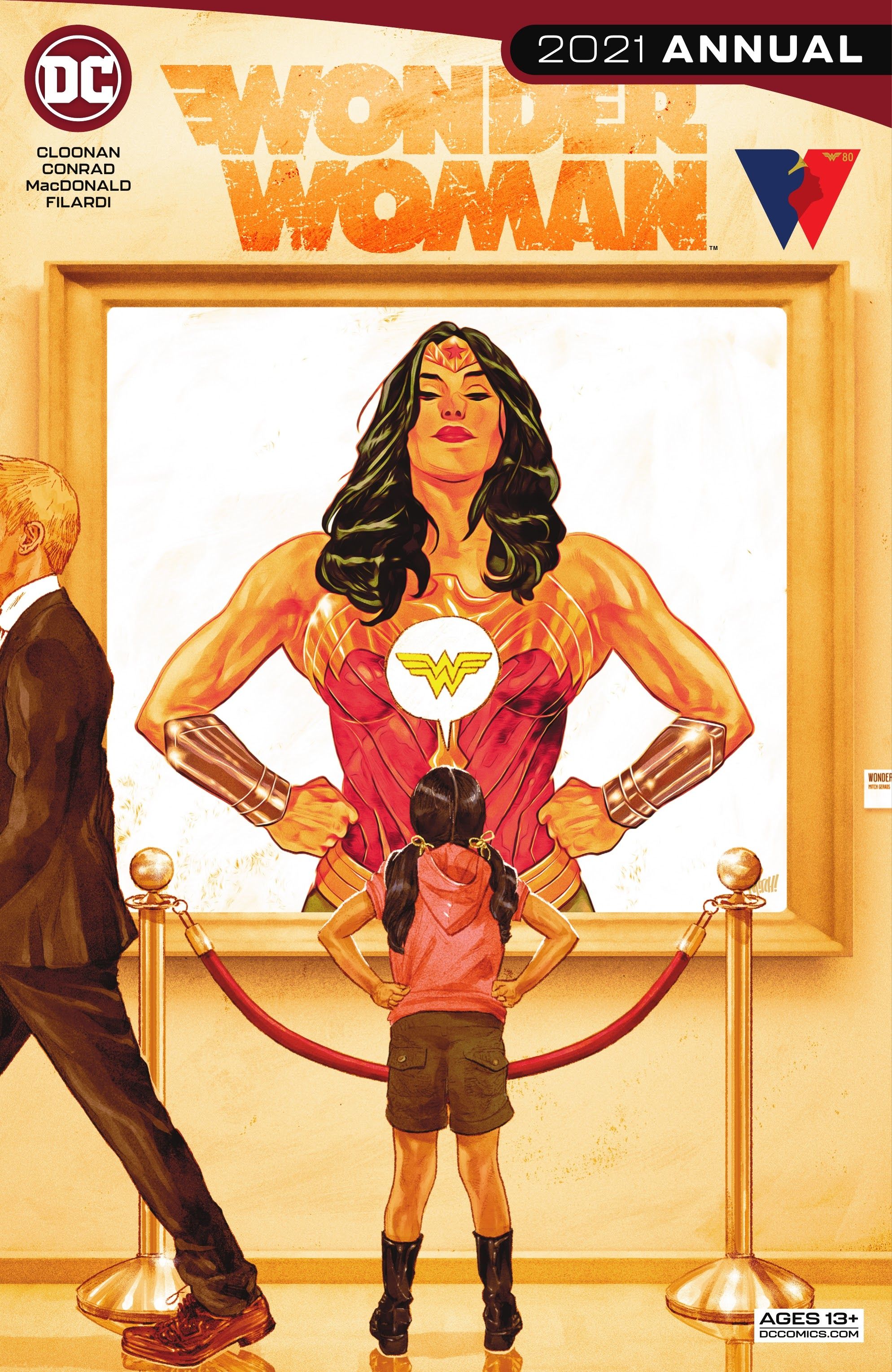 Between the release of The Midnighter 2021 Annual and the highly anticipated Batgirls series debuting on Dec. 14, it’s been an impressively productive year for the writing team of Michael W Conrad and Becky Cloonan. Their work on Wonder Woman stands out as a remarkable contribution to the DC Universe. It’s no surprise that the duo teamed up with artist Andy MacDonald to create Wonder Woman 2021 Annual #1, an action-packed issue with the potential to change the way Diana Prince looks at Themyscira forever.

Wonder Woman 2021 Annual #1 centers around Diana’s trip to the Washington D.C Art Museum to see the Themyscira history exhibit. On her way, she takes a detour to stop a bank robbery which makes her late to meet with Etta Candy. The Amazon decides to see the exhibit by herself. Unfortunately, before she has the time to enjoy the history of her people, Wonder Woman is approached by a mysterious character named Altuum, who claims to have information that challenges everything Diana thinks she knows about her homeland. 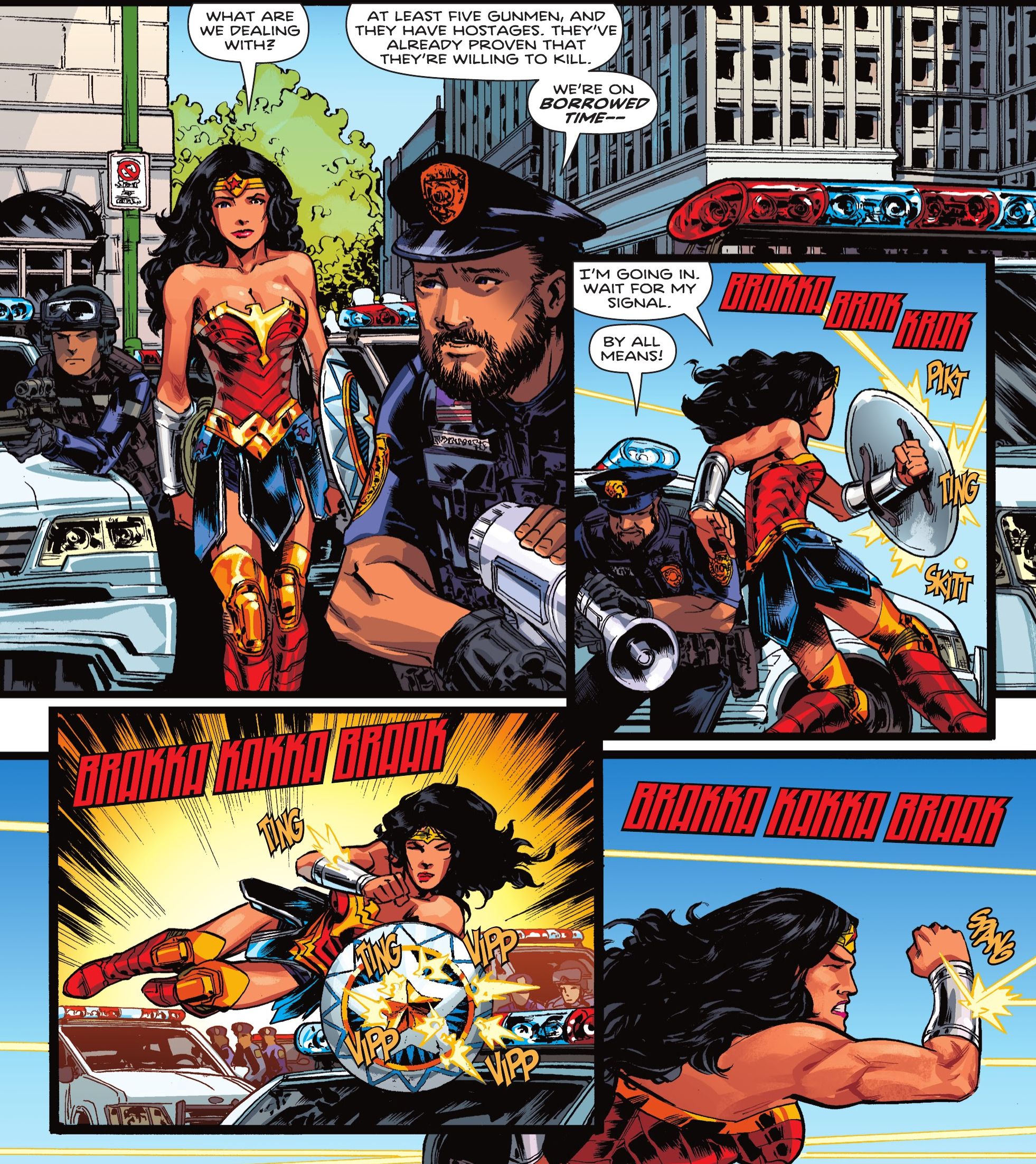 Cloonan and Conrad cover a lot of ground in Wonder Woman 2021 Annual #1. Their careful pacing allows them to include an action-packed bank robbery sequence, an Earth-shattering conversation turned confrontation, and some quiet moments detailing Diana and Etta’s friendship — all without exhausting the reader. It is a busy story, but it never risks becoming inaccessible. The museum is the perfect backdrop for the confrontation between Altuum and Diana, as they discuss the painful nuances of history and who owns it. The contrast between Wonder Woman’s confidence in dealing with the bank robbers and her uncertainty in talking with Altuum makes for a fascinating tension that makes this issue impossible to put down.

Andy MacDonald handles all of the action in Wonder Woman 2021 Annual #1 perfectly. His fight scenes are easy to read and illustrate just how powerful Diana is. MacDonald handles the story’s visually dense museum setting with the same energy as its fight scenes. He moves the reader’s eye across the page with exciting and detailed compositions that encourage the audience to linger over every panel. At times, MacDonald’s art struggles to capture characters’ emotions. He draws faces as simply as possible, making characters’ emotions hard to discern — detracting from the quality of Conrad and Cloonan’s writing and adding an awkwardness to conversations.

Related: Wonder Woman’s Most Vicious Movie Villain Has One Dream – And it Makes Her Even Sadder

Almost every moment of Wonder Woman 2021 Annual #1 feels important — whether the hero is saving hostages or grappling with new, troubling information about her family history. Cloonan and Conrad wrote a dense but easy-to-read story. MacDonald’s excellent compositions make up for the occasional misstep to make this Annual an exhilarating celebration of an iconic character.