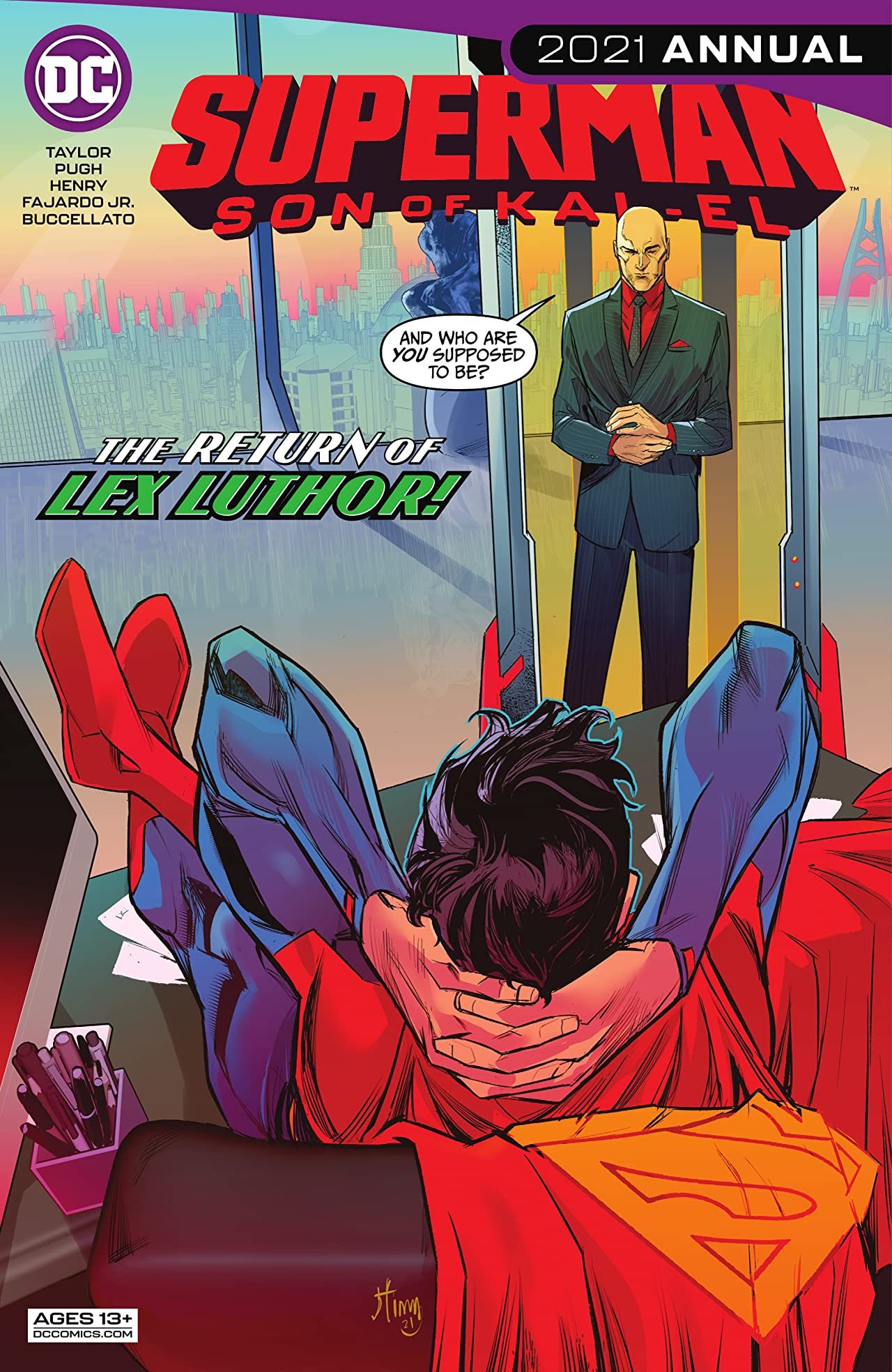 Is it possible for Superman and Lex Luthor to work together for the greater good? In Superman: Son of Kal-El 2021 Annual #1, Tom Taylor, Steve Pugh, and Clayton Henry seek to answer that question by positioning new Superman Jon Kent against Lex Luthor to see if they can get along. The issue welcomes readers to the series by establishing Luthor’s role in Jon’s life while addressing the baggage that comes with being Earth’s protector. Superman: Son of Kal-El 2021 Annual #1 is a textbook example of how comic book annuals should be used, building on the existing story without isolating anybody unfamiliar with the property.

Superman: Son of Kal-El 2021 Annual #1 opens with a flashback that shows the original Superman, Clark Kent, reeling from a Kryptonite attack delivered by the tag-team of Metallo and Lex Luthor. As Superman faces certain doom, Luthor gloats about his conquest and how excited he is to kill the Man of Steel. Unfortunately for Luthor, the attack was a ruse and Metallo reveals himself to be Martian Manhunter in disguise. Later, Superman visits Luthor in prison and enters a chess game against his frequent foe. While playing, the two agree that they could be an incredible team if they were on the same page. The issue then catches up to the present day, as Jon Kent grapples with the wealth of dilemmas he now has to address. However, Jon soon has to address these problems head-on when he rushes to protect Lex from an incoming attack. As Jon and Lex rationalize their almost-team-up, the pair resolves to pick up where Clark and Luthor left off all those years ago, playing a game of chess for the fate of the city’s skyline.

Writer Tom Taylor wastes little time with Superman: Son of Kal-El 2021 Annual #1. The script is razor-tight, and the plot moves at a blistering pace to fit an entire arc’s worth of storytelling into a single issue. By contrasting Lex and Clark’s dynamic with Lex and Jon’s, Taylor layers the story with themes of inheritance, control, power, and responsibility. Clark revels in antagonizing Luthor, simply starting conflicts and then walking away to where he knows Luthor can’t follow. Similarly, Jon is quick to toy with Lex in their chess game, outsmarting one of the world’s brightest minds by studying techniques at superspeed. These subtle echoes of Clark’s character show that even though Jon is his own man, he will always be his father’s son.

Clayton Henry and Steve Buccellato depict the opening segment of Superman: Son of Kal-El 2021 Annual #1. Henry applies powerful postures and strong linework to his art. These techniques make the fight between Superman and Lex feel reminiscent of Superman: The Animated Series. Similarly, Buccellato leans into bold, iconic coloring that leaps off the page, effectively casting the story in an old-fashioned but no-less-beautiful palette of yesteryear. The colors make the sequence feel like the glory days of old and contrast well with the issue’s main narrative.

RELATED: The New Superman’s Body Overcame a Power That Killed the Man of Steel – Here’s How

Steve Pugh and Rolumo Fajardo Jr. capture the modern-day exploits of Jon Kent. Pugh’s characters have a presence and weight that makes them feel like living, breathing people. This presence comes across well when Jon exerts himself performing superheroic deeds, showing his inexperience. Additionally, Jon’s expressiveness speaks to his youth and creates memorable visual gags against the disgruntled postures of his elders. His final exit from Lexcorp is comedy gold, captured perfectly by his smile. Fajardo’s colors are well-rounded and warm, welcoming readers while making Jon feel real. Jon is a kid that you’d want to know, the friend you’d like to have, and Farardo’s palette encapsulates that sentiment.

Overall, Superman: Son of Kal-El 2021 Annual #1 is a unique one-shot that reminds readers why Jon Kent is the breakout hero of 2021. The youthful exuberance of Jon is refreshing in a landscape of comics that can often become obsessively bleak. Taylor, Pugh, Henry, and the entire creative team make Metropolis feel like home by exploring these characters’ significant impact on their world. Superman: Son of Kal-El 2021 Annual #1 is an exceptional comic, showing Jon Kent’s trajectory is taking him up, up, and away into the upper echelon of DC’s best.

KEEP READING: Superman’s Worst Kryptonite Is Back – Here’s Why It’s So Dangerous

Simon Pegg Opens Up About Tom Cruise Friendship: “He Likes Me Because I Make Him Laugh”

Buffy the Vampire Slayer’s Most Powerful Scooby May Be Willow’s Daughter!