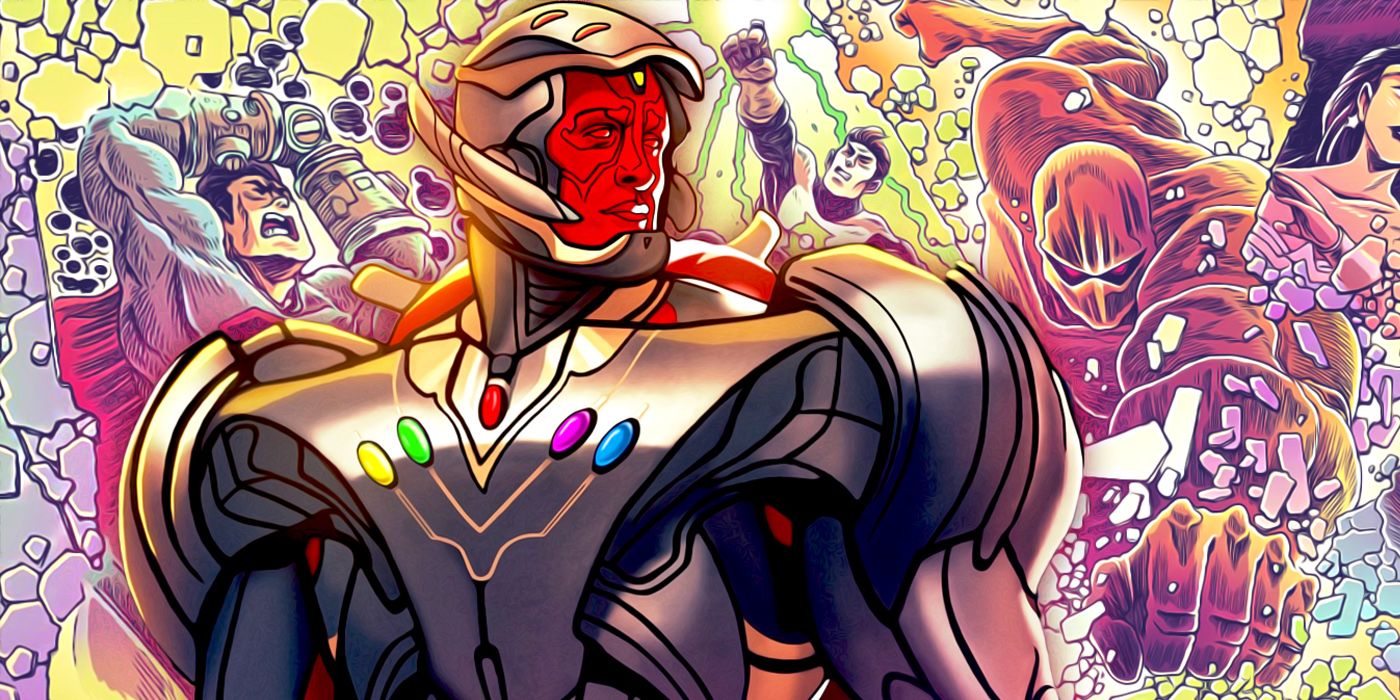 When Justice League Unlimited first aired, it propped up its version of Amazo as the strongest enemy the League had ever faced. In Justice League Infinity #6 (by J.M. DeMatteis, James Tucker, Ethen Beavers, Nick Filardi, AW’s DC Hopkins), however, another version of Amazo debuted and blew the current one out of the water. Amazo II, as christened by John Stewart, is a version of Amazo who merged with the Anti-Life Equation and thus became a genocidal monster with godlike powers.

This makes him similar to the Ultron from What If…?, who gained control over the Infinity Stones and used them to almost wipe out the universe. Though Ultron’s power is arguably greater than Amazo II’s, the new android’s power is deadlier, being entirely fueled by the Anti-Life Equation, whereas Ultron merely at least believes in an innate path to peace, however flawed and artificial that may be. 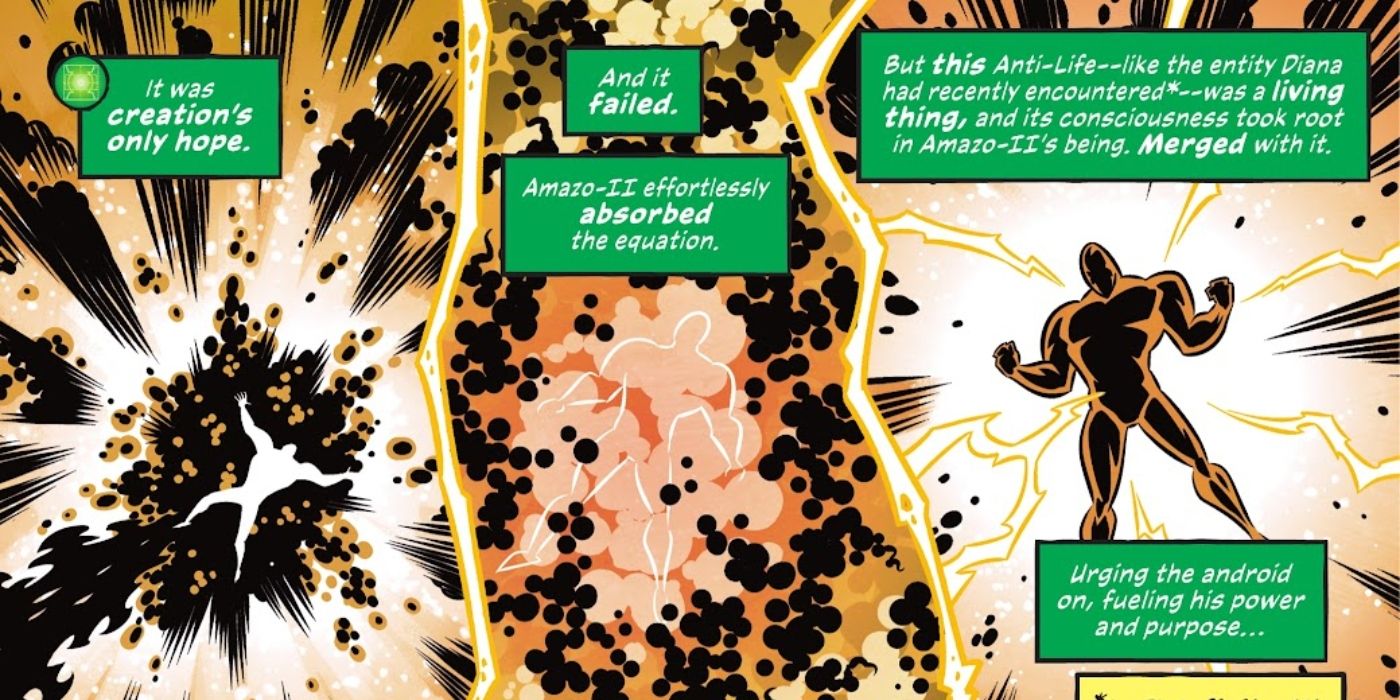 The two stand on a fairly level playing field, seeming to be equals from a brief examination. However, each has their own strengths and weaknesses. Ultron, for example, is in possession of the Infinity Stones, artifacts that allow him to have complete mastery over all of reality. This allows him to be more surgical with his needs. For example, instead of blasting his way through a stone wall, he could just change it to water or teleport past it. The Infinity Stones give him a powers only limited by his imagination. Seeing as how Ultron is highly adaptive, though, those limits are continually shattered.

In comparison, Amazon II was already a powerful being on his own. Able to absorb whatever power he encounters and gain control over it, he would only become more dangerous when given control over the Anti-Life Equation. The power is significantly less precise than Ultron’s and really only possesses one use: mastery of death. This is exactly what Amazo II did, killing all life in his universe before hungering for more carnage.

RELATED: Whatever Happened to the Justice League’s Forgotten Leader? 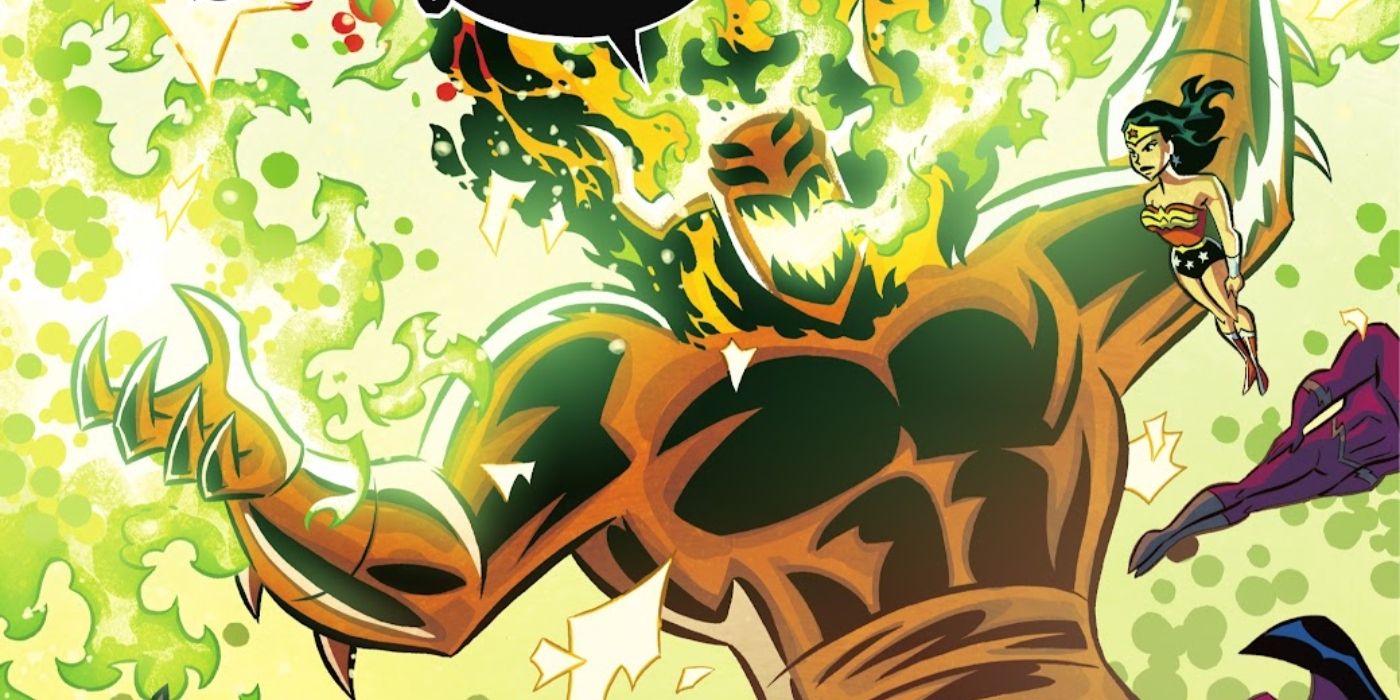 Interestingly, though, while this makes Amazo II less powerful than Infinity Ultron, it also makes him more dangerous. For all of Ultron’s various flaws in his perception of what true peace would look like, he only ever wanted to exterminate intelligent organic life. He believes that thinking people are the greatest evil of the cosmos, so he got rid of them. This was horrifying, but it still left potential for new life to grow. Amazo II has none of these caveats to his power.

When he merged with the Anti-Life Equation, he also took on its will, becoming a twisted entity whose only purpose is to sow destruction. So when he says he destroyed his universe, this isn’t a boast about wiping out civilization, he destroyed everything. There is no potential for growth of new life in his wake and he did it in a relatively short amount of time. Even Ultron left behind planets with some life, but Amazo II used the entirety of his power to wipe out any potential for a future after he was done. Even more terrifying is that now he has come to the convergence of all universes to try and continue his work. All that stands between him and multiversal extinction is a few vastly underpowered superheroes.

KEEP READING: A Powerful Justice Leaguer’s True Origin Is Heartbreaking – and Changes Everything