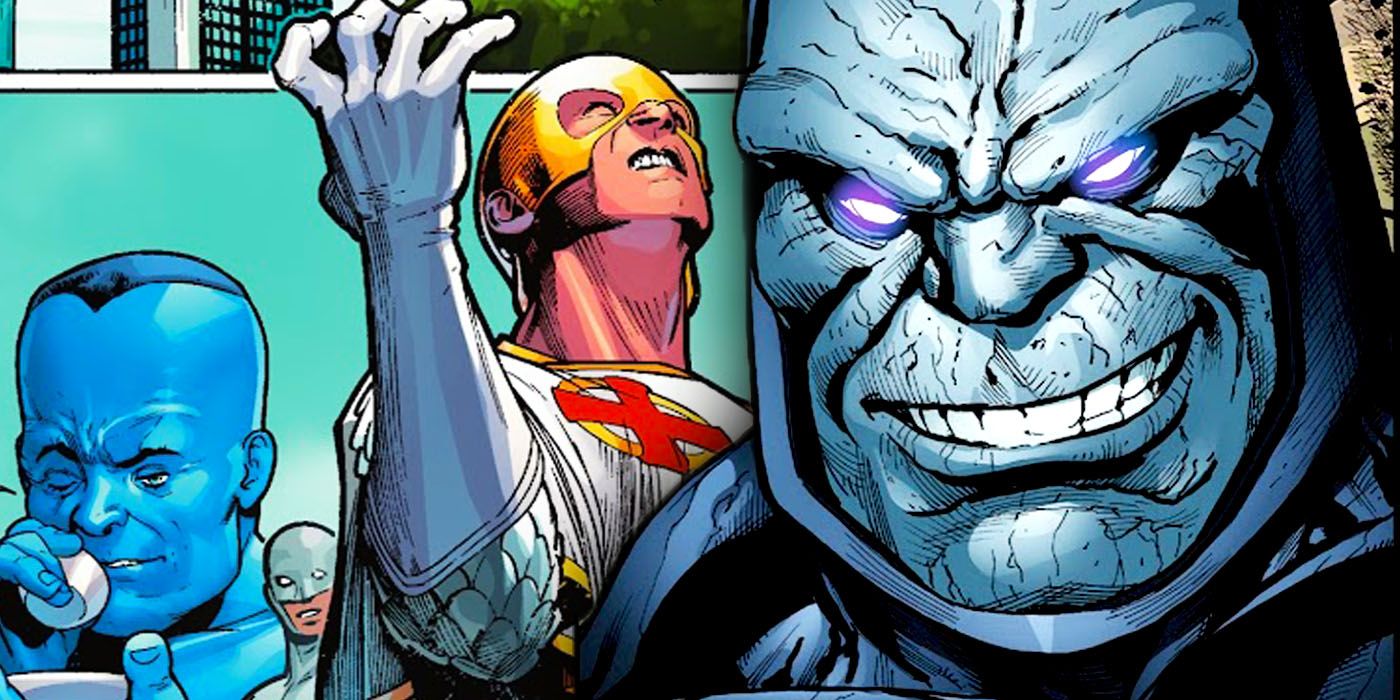 As the two premiere superhero publishers in North America, DC and Marvel have a long history of openly referencing each other’s characters — even occasionally pitting them against their own in-house icons. But DC just presented the perfect way to reference anything Marvel does going forward — and automatically have them positioned against the DC heroes.

It turns out that the heroes of Earth-8, who are clear pastiches of Marvel’s Avengers, were all in on the plan to ally with Darkseid and Injustice Incarnate, as revealed in Justice League Incarnate #1 by Joshua Williamson, Dennis Culver, Brandon Peterson, Andrei Bressan, Tom Derenick, Hi-Fi & Tom Napolitano. In doing so, they further cemented Earth-8 as enemies of the core-DC Universe. 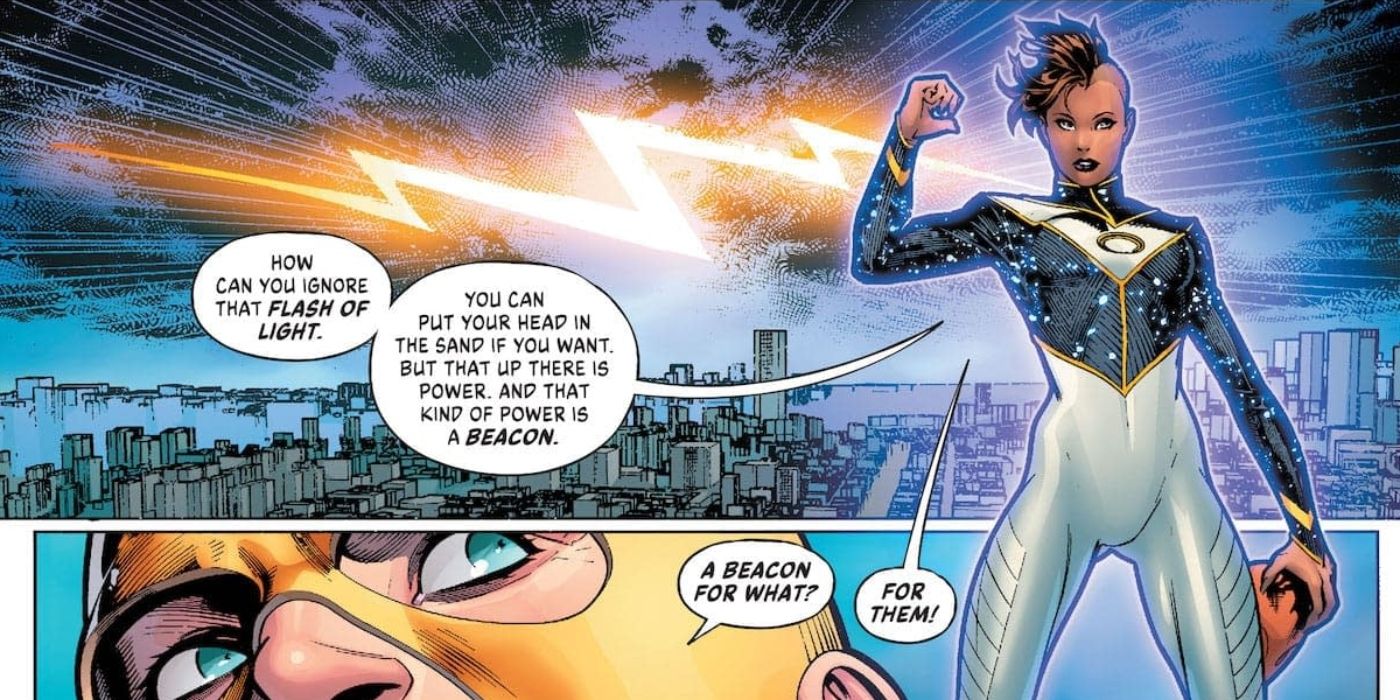 As mentioned, Earth-8 in the current DC Multiverse is the answer to the Marvel Universe. Each of the major figures on this world are analogues for Marvel heroes, such as the Retaliators, Behemoth, and the Future Family, who are clear stand-ins for the Avengers, Hulk, and the Fantastic Four. The most prominent figure from Earth-8 recently has been Machinehead, who is their version of Iron Man. Serving on the multiversal Justice League Incarnate, Machinehead initially seemed like a valuable team member. But it turns out he’d grown disillusioned with the amount of damage the multiverse invited to their reality. Eventually siding with Injustice Incarnate and making a bargain with Psycho-Pirate and Darkseid, Machinehead betrayed the heroic Justice League Incarnate — and eventually died at the hands of Darkseid.

Visiting Earth-8 after Tartarus — their version of Thanos — attacked the world, Justice League Incarnate discovered a ruined landscape. The Retaliators had largely fallen to their variant of Marvel’s Mad Titan, with the American Crusader killed and the Behemoth ripped in half. Silver Eagle (the Earth-8 Falcon) blames the chaos on Justice League Incarnate and the multiverse as a whole, revealing he and the rest of his teammates had been aware of Machinehead’s duplicity. In fact, they’d openly supported it, voting as a team in favor of allying with Psycho-Pirate in exchange for being spared from the machinations of the multiverse. After Darkseid kills Tartarus but fails to collect the immense energies on Earth-8, he departs — while Silver Eagle takes up the Crusader’s shield and orders the multiversal heroes to leave.

RELATED: A Justice League Hero Is Going to Die in Early 2022 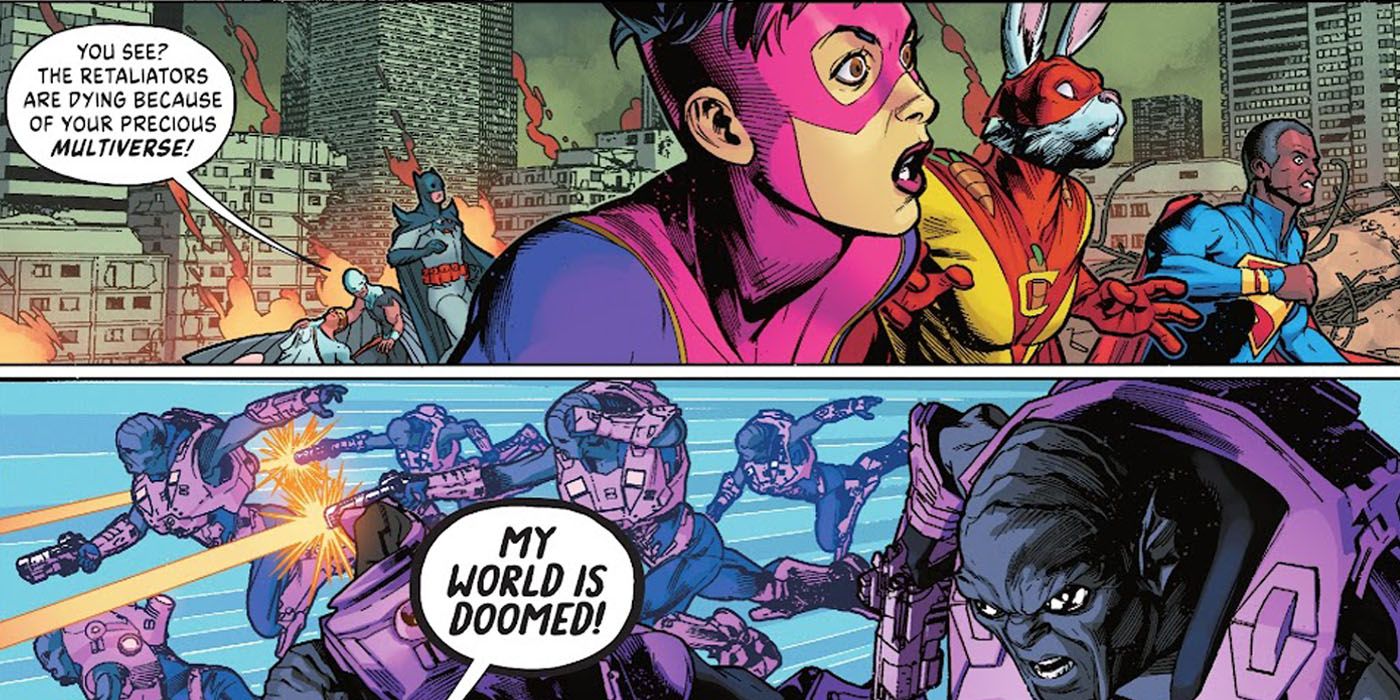 In many ways, it’s a perfect way for DC’s version of the Marvel Universe to contend with the fact that they are just an afterthought in the grand scheme of things. In the DC Multiverse, the heroes of Earth-8 will likely never be anything other than bit players, with their world simply being among the countless destroyed and reborn multiple times due to events occurring in other realities. Similar to the heroes of the actual Marvel Universe attempting to confront the threats posed in the cosmic aftermath of multiverse-breaking events like Secret Wars, the heroes of Earth-8 attempted to remedy their situation. But whereas the Marvel heroes elevated themselves to confront those threats, the denizens of Earth-8 embraced a darker impulse and made a metaphorical deal with the devil and allied with DC’s premiere force of evil.

In essence, DC just positioned their in-house version of the Marvel Universe to be deliberately opposed to their own heroes. With the heroes of Earth-8 now holding a grudge against the entire extended DC multiverse, characters like Superman or the Flash could have an easy excuse to come up against essentially any Marvel hero. It’s a clever way to allow DC to isolate its pastiche of the Marvel Universe, and have its own personal control over the DC/Marvel rivalry, in a way similar to how Marvel uses the Squadron Supreme. With both sides throwing punches at proxy targets, arguably more than ever, it could be interesting to see how the fight develops.

KEEP READING: How Darkseid Caused The Creation Of The Justice League Twice Before The DCEU