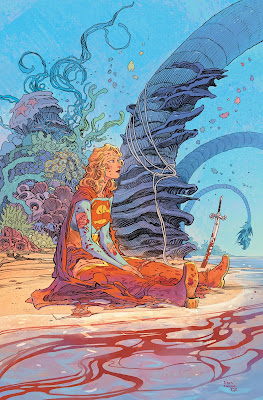 The February solicits for DC Comics came out last week. This is an interesting month as we once again get some Legion back on the shelves. It also marks the end of the Tom King Supergirl mini-series. Will there be any Kara to read after this? Who knows.

If you want to peruse the entirety of the solicits, you can head to Newsarama here:
https://www.gamesradar.com/dc-comics-february-2022-solicitations/

Krem’s fate revealed! As Supergirl continues her battle against the Brigands, Ruthye squares off against this most vile villain in hopes of avenging her father and completing their mission. Will justice be served on both accounts? Or will our heroes fail? You won’t want to miss thrilling conclusion of the acclaimed miniseries that has changed Kara Zor-El for good!

From the beginning, we have been told that Kara kills Krem. As the whole story is a flashback, I am reserving the hope that she doesn’t become a murderer. Although, if you are looking for a reason for her to go pacifist and loner (as seen in Future State), guilt from becoming a killer is a good motivation.

The miniseries that has changed Kara Zor-El for good! But I worry that where she ends up is a bad place and it sticks. Lots to worry about.
Nothing but love for the art here. 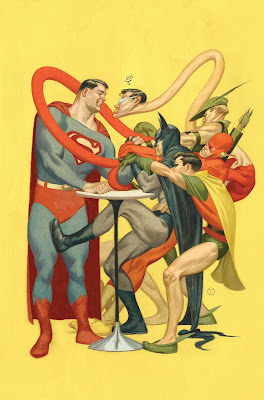 Superman has become a force to be reckoned with inside Warworld’s arena, and Mongul questions his decision to keep his enemies alive. As Superman’s new Phaelosian ally Kryl-Ux teaches him new ways to fight without powers, he starts to win Warzoons over to his cause…but someone within his inner circle finds their allegiances tested. Meanwhile, the elusive Midnighter uses his talents to find the missing members of the Authority.

I’ll be sad to see Daniel Sampere go but I have seen Riccardo Federici’s stuff on line and I think the title is in good hands.

Perhaps Kryl-Ux is the hooded figure speaking to Superman in last issue?
And this sounds a little like the movie Gladiator where Maximus gains favor and the Emperor wonders if the captive should just be offed.
This book has been solid for a while so looking forward to this. And love that Todesco cover! 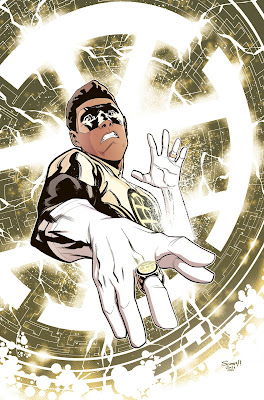 Looks like the ‘VS.’ part of this title is part of the first issue only as the two teams seem to be teaming up here. The power behind the Gold Lantern hardly looked like Oans so I wonder what tie they do have the Great Darkness. And is this Darkness tied to Darkseid?

I liked Bendis’ Legion so I am glad we will be getting more. 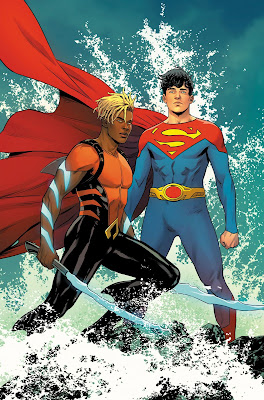 Henry Bendix’s plans for ultimate control threaten every superhero on Earth. And, in trying to stand against the dictator of Gamorra, Superman makes himself a target of business and world leaders. He is seen by too many as a force that must be stopped. How much can even a Man of Steel stand against before he bends?

Well, it looks like perhaps Tom Taylor is going to show us some ramifications for Jon’s actions.


Although I suppose with the tenor of this book, the business leaders and world leaders may very well be painted with a negative brush too.
Interesting that Bendix has some world control ambitions. 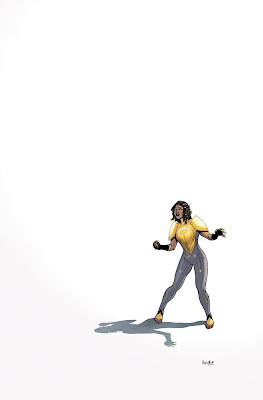 “Lords of Chaos” part two! The Justice League and Justice League Dark team up to navigate the remade world of chaos. All the heroes must come together to save what’s left of the world they have dedicated their lives to protecting. But has Doctor Fate gone bad? Oh no, he has.

I don’t mind negative space covers like this. I suppose it shows my own predilections that I immediately think about room for a remarque or for con sigs.

I freely admit I haven’t actually been paying close attention to the JLD back-up so I hope that there is a recap. 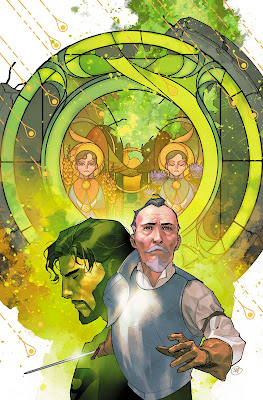 The arrival of the Els by spaceship 19 years earlier was a pivotal moment for the kingdom, and a prophecy was born! But what were those early years like for the Els, and how did they come to be monarchs of the kingdom? And what catastrophic event triggered everything that was to follow?

I suppose I should have shown it but the Josh Middleton variant showing Harley playing a lute is worth the money.

Looks like this is the ‘origin’ issue. Mark my words, here is where Jor-El plotting the Wayne’s assassination is going to be revealed. 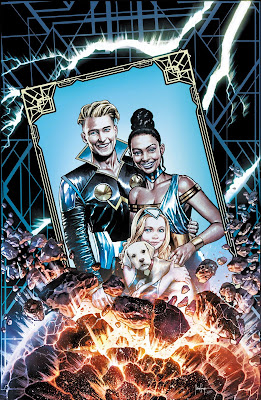 As evidence of Krypton’s environmental precarity mounts, the ruling council fights even harder to hide behind the myth of utopia. But a refusal to confront the problem is truly a refusal to attempt a solution! Zod is determined to force their hands and turns to his old friend Jor-El for backup, but their methods may be too dissimilar.

I keep forgetting this series is coming out.

I like the idea of Zod and Jor-El being pals who differ in opinion. Pretty sure that is part of the plotline in both the Man of Steel movie and the Krypton show.
I suppose given the world today so much of Krypton’s legacy could be current day allegory. 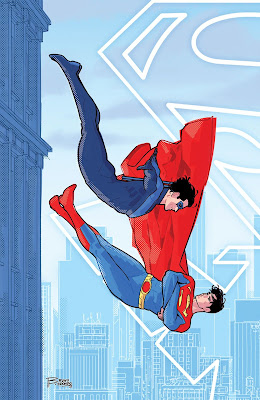 Superman/Nightwing crossover! Years ago,when Robin took his first uncertain steps away from Batman as his own hero, Superman stepped in and offered Dick Grayson crucial advice, support, and a name: Nightwing. Now it’s time for Nightwing to return the favor. To be concluded in Superman: Son of Kal-El #9 in March!

I don’t know if Jon has met Dick before. I like what Taylor is doing on Nightwing a bit more than what he is doing on Superman. Both heroes are working to change the world as much as they are trying to punch villains. Let’s see if Nightwing gives Jon some sound advice.

Did I miss anything?

Wait, Is Fortnite Chapter 3 Bringing Back the Old Map?