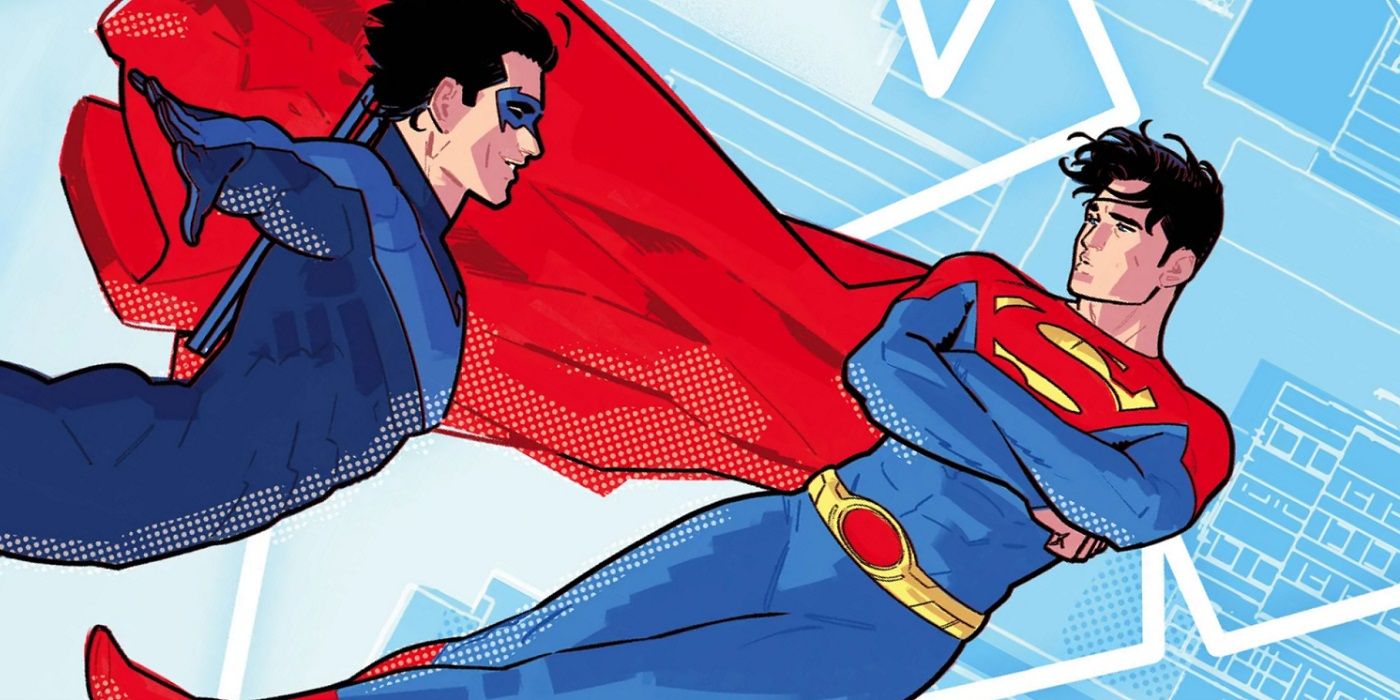 The early days of Dick Grayson and Jon Kent’s friendship will play out in an upcoming issue of Nightwing.

DC released a preview of Nightwing #89 by Tom Taylor and Bruno Redondo which begins a two-part crossover between the series and Superman: Son of Kal-El. In the excerpt, Batman and Nightwing arrive on a mysterious island, seemingly intent on consoling Jon when he was still Superboy. Unfortunately, Redondo’s art suggests that the appearance of the Dynamic Duo startles Jon, leading Dick to calm Jon down by unmasking himself and Batman. Later, once Superman has arrived for his son, Dick reaches into Batman’s utility belt to pull out his secret weapon — a lollipop, which he presents to Jon in a gesture of friendship.

RELATED: Nightwing’s New ‘Partner’ Bitewing Gets Her First Costume on an Adorable Cover 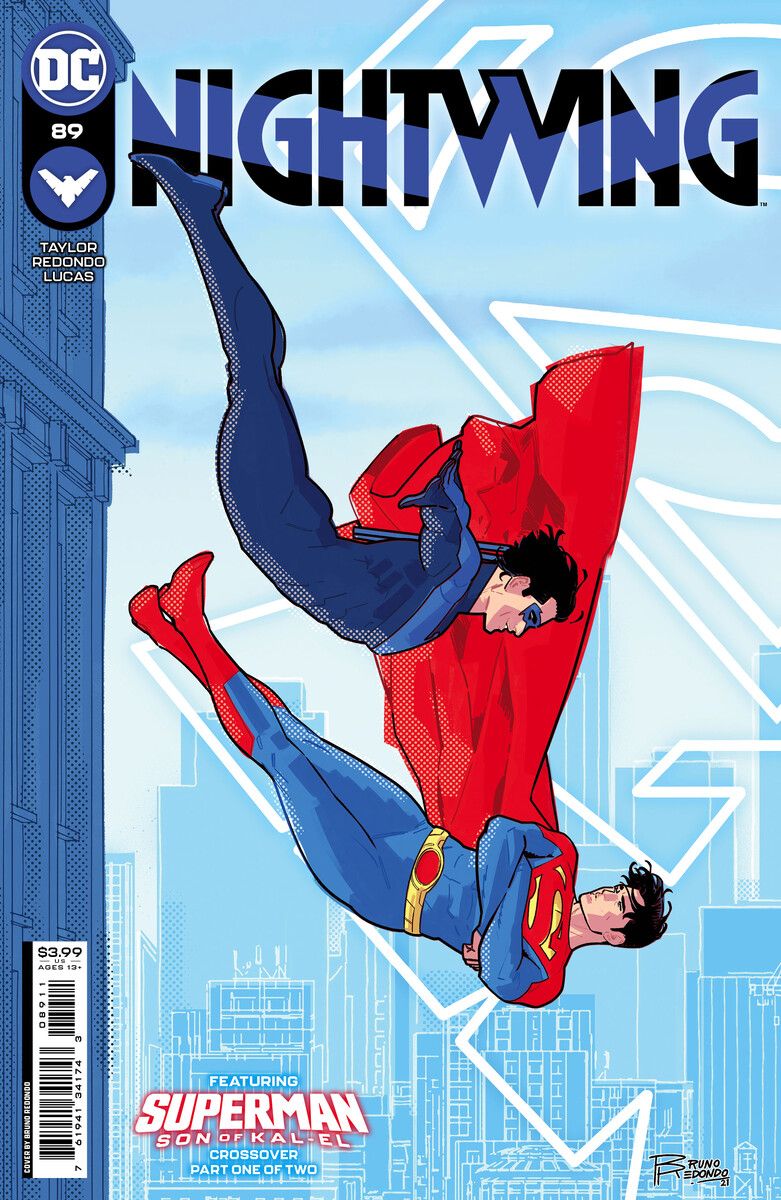 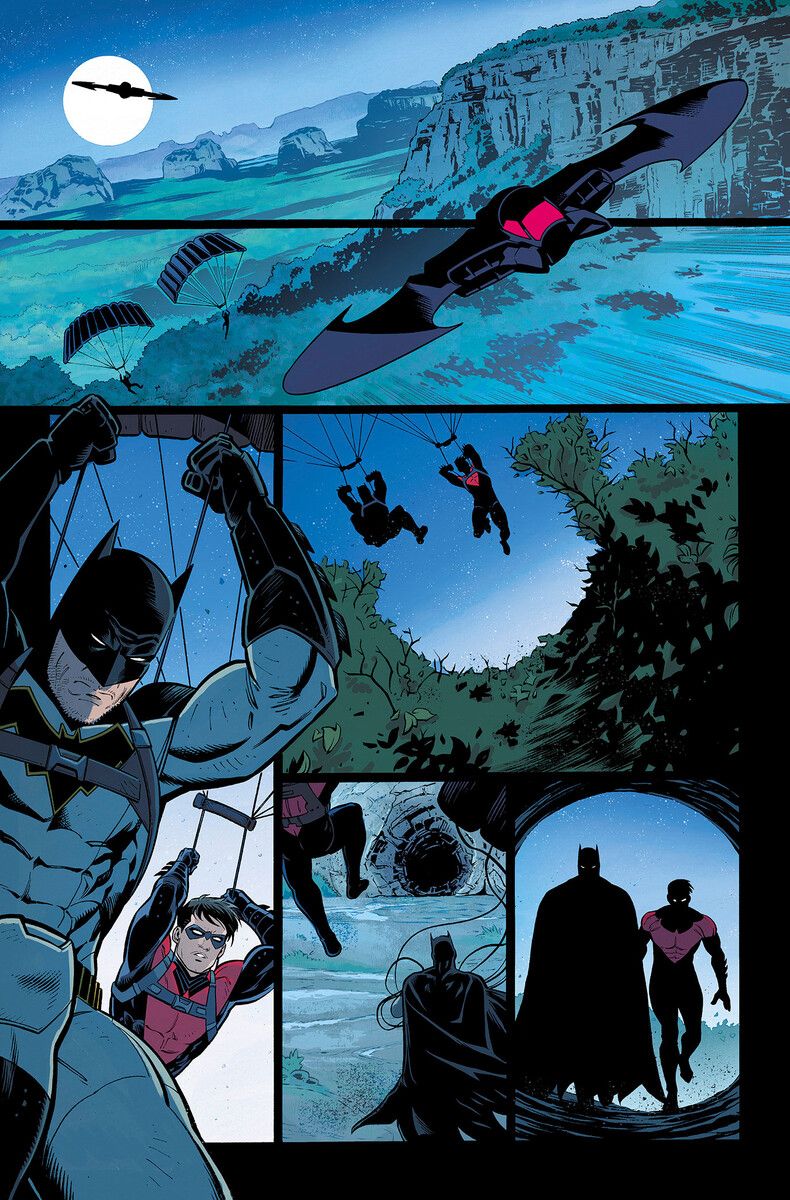 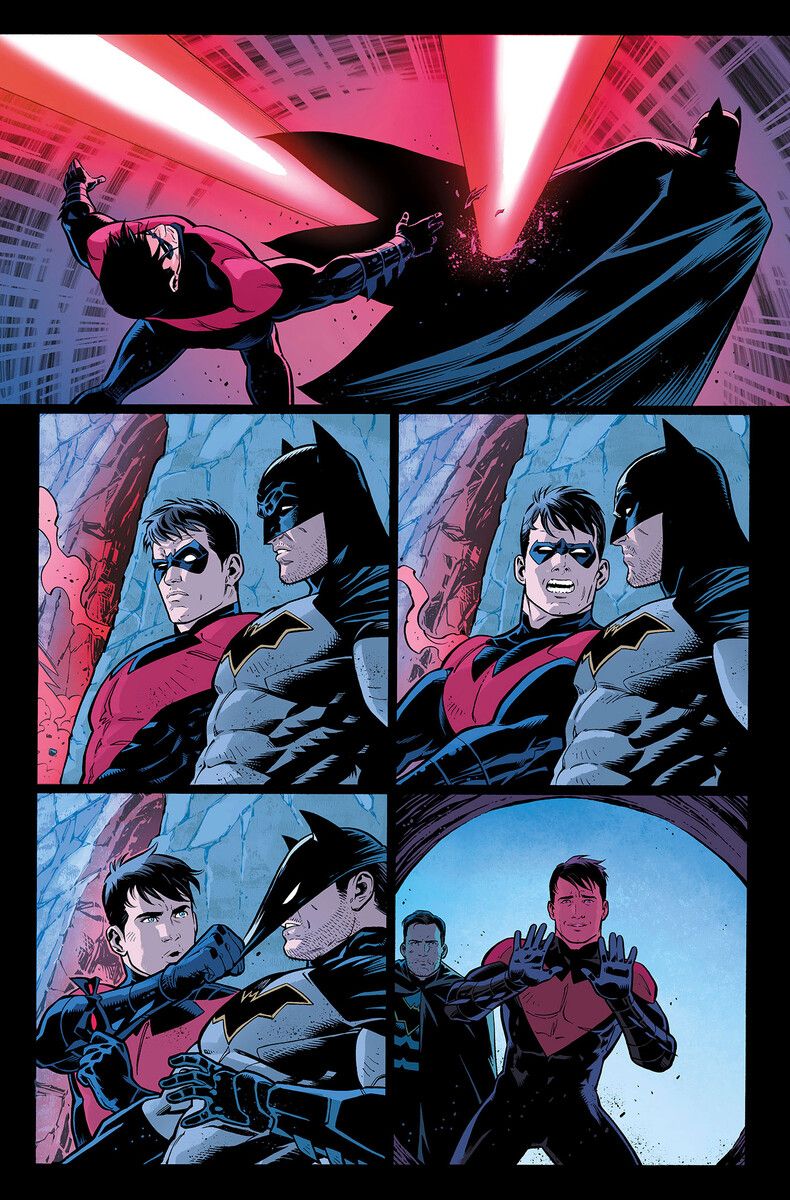 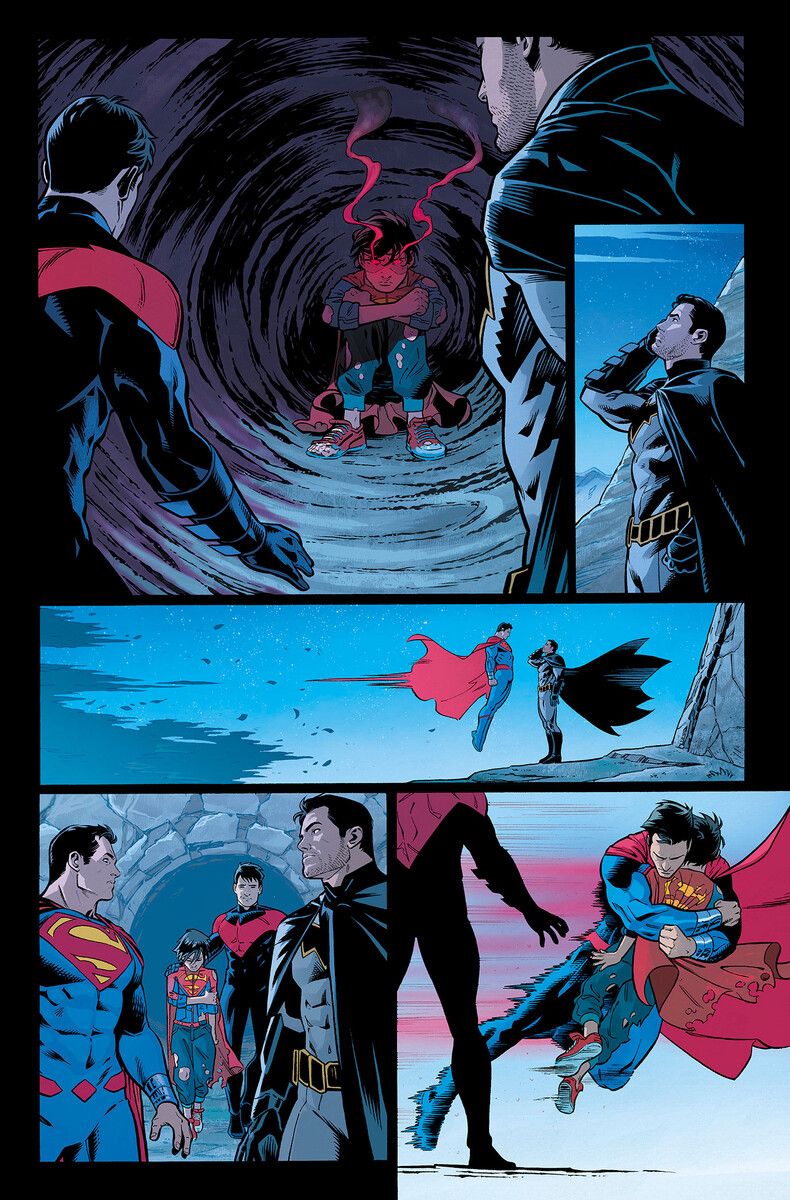 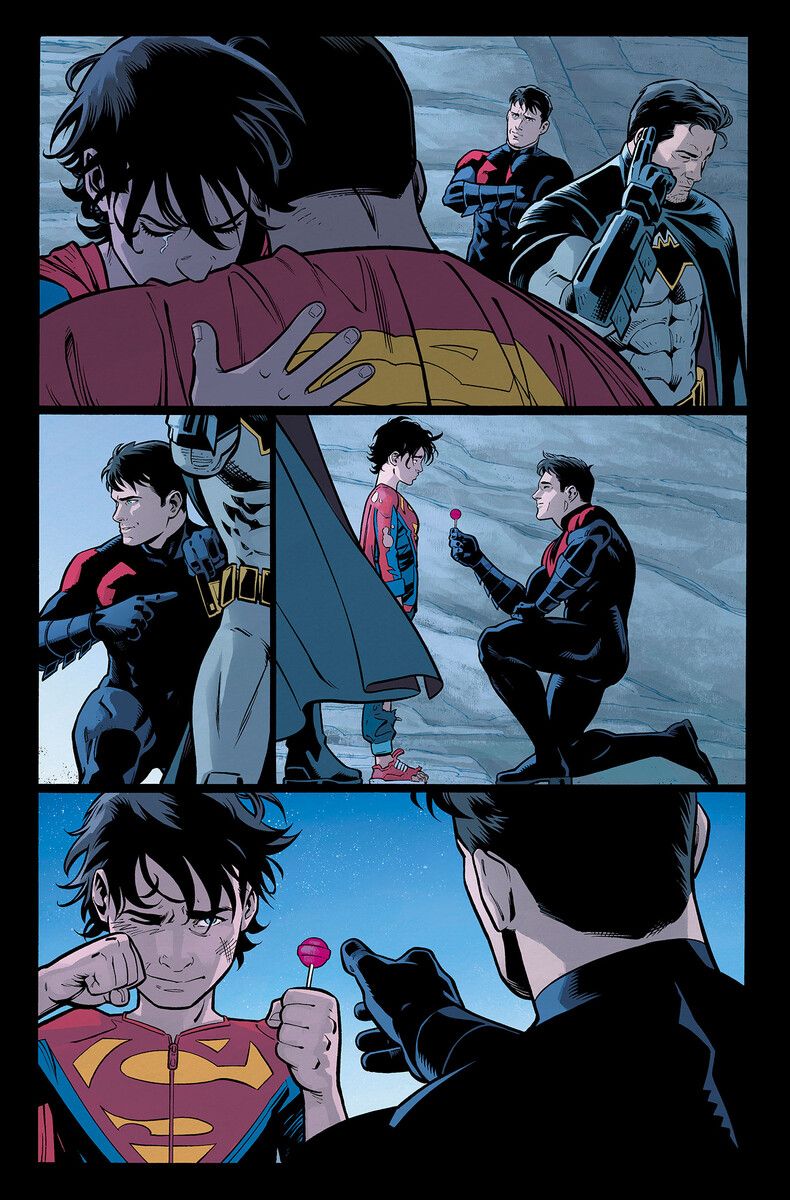 Due to the hectic nature of both Jon and Dick’s superhero lives, this heartfelt scene is one of the few moments between the two that readers have seen unfold in DC’s comics. When Jon first arrived as Superboy, he was still a child, and as such, most of his adventures were under the watchful eye of Superman. While Jon eventually aged up and became a young man in the wake of Man of Steel, Dick had been shot and developed amnesia by this time, preventing them from bonding. Similarly, when Dick regained his memories and returned to the role of Nightwing, Jon was busy in the future with the Legion of Super-Heroes. As such, the impending Nightwing/Superman: Son of Kal-El team-up will be the first thorough exploration of their relationship.

Last year, Jon inherited the title of Superman from his father, Clark Kent. Though the two briefly fought side-by-side, Clark had to leave the Earth to battle on Warworld, leaving the planet in Jon’s hands. However, before leaving, Clark asked Dick to keep an eye out for his son and serve as a voice of experience should Jon need it. Nightwing #89’s core premise finally delivers on this promise, as Dick steps into Jon’s life with some crucial advice.

RELATED: DC’s Kingpin Just Showed How Impossible It is To Be A Crime Boss Fighting Superheroes

This storyline is the latest to elevate Dick as one of DC’s most important heroes, with or without his mask. In recent issues of Nightwing, Dick repurposed his inheritance to create the Alfred Pennyworth Foundation, a charity organization that combats poverty and hunger in the city. Additionally, Dick spends his nights protecting Blüdhaven from the city’s criminal element, as well as mentoring the students of Teen Titan’s Academy, the next generation of heroes.

After Dick’s team-up with Jon, Nightwing will welcome the Flash as a guest star in subsequent issues. The arc will be the first on-page team-up between the Teen Titans’ founders since Nightwing #21, nearly five years ago. The story sees Wally travel to Bludhaven to protect Dick as his bodyguard before eventually taking a day off to recharge their batteries together.

KEEP READING: Nightwing’s Best Costume Is Back- But With a Twist!