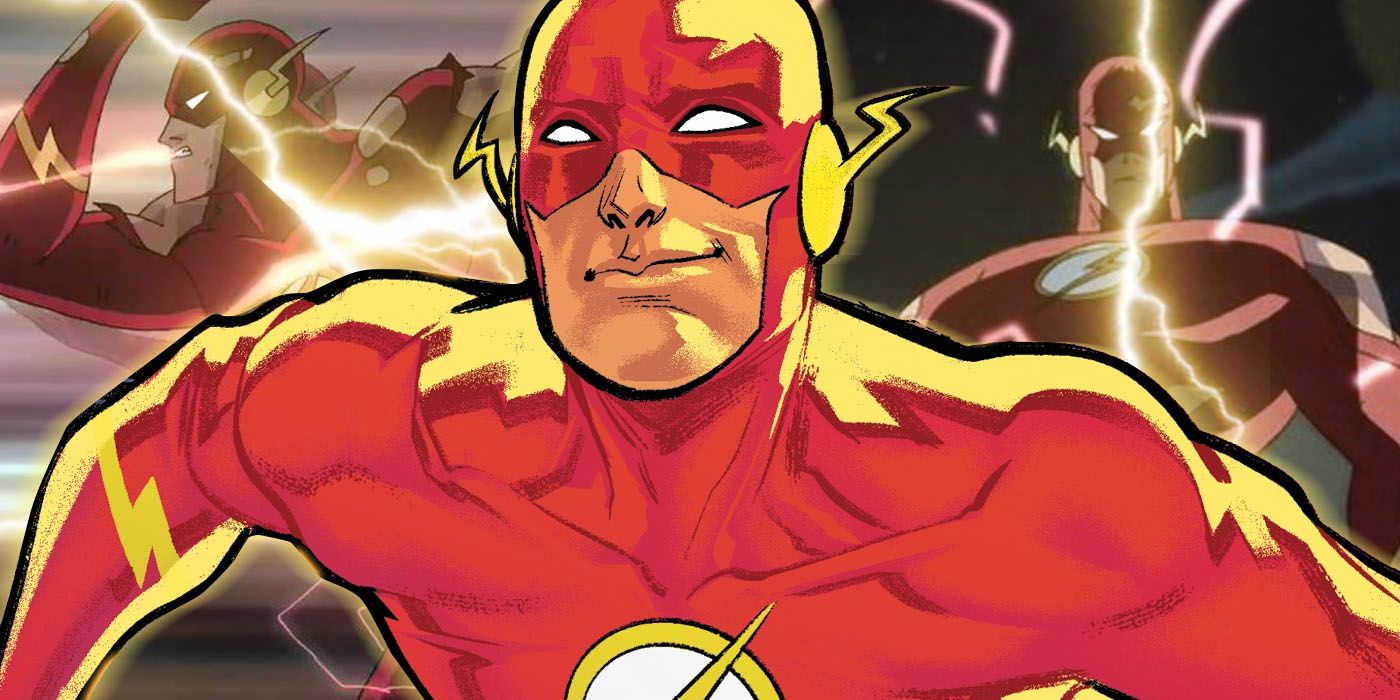 The DC Animated Universe is considered one of the definitive interpretations of DC’s iconic characters. Having started with Batman: The Animated Series, it has influenced the comics as much as the comics have influenced it. However, not everything made it into the beloved shows. A major part of one of the core members of the Justice League, the Flash, was absent from the animated counterpart.

Now, however, that’s all changed with Justice League Infinity #7 (by J.M. DeMatteis, James Tucker, Ethen Beavers, Nick Filardi, and AW’s DC Hopkins). The comic book continuation of the Justice League Unlimited series has given new life to these characters and created a chance to explore some of the elements that the series didn’t get the chance to. In the case of the Flash, that means the Speed Force.

RELATED: Batman Is Wrong About His Position in the Justice League – Here’s Why 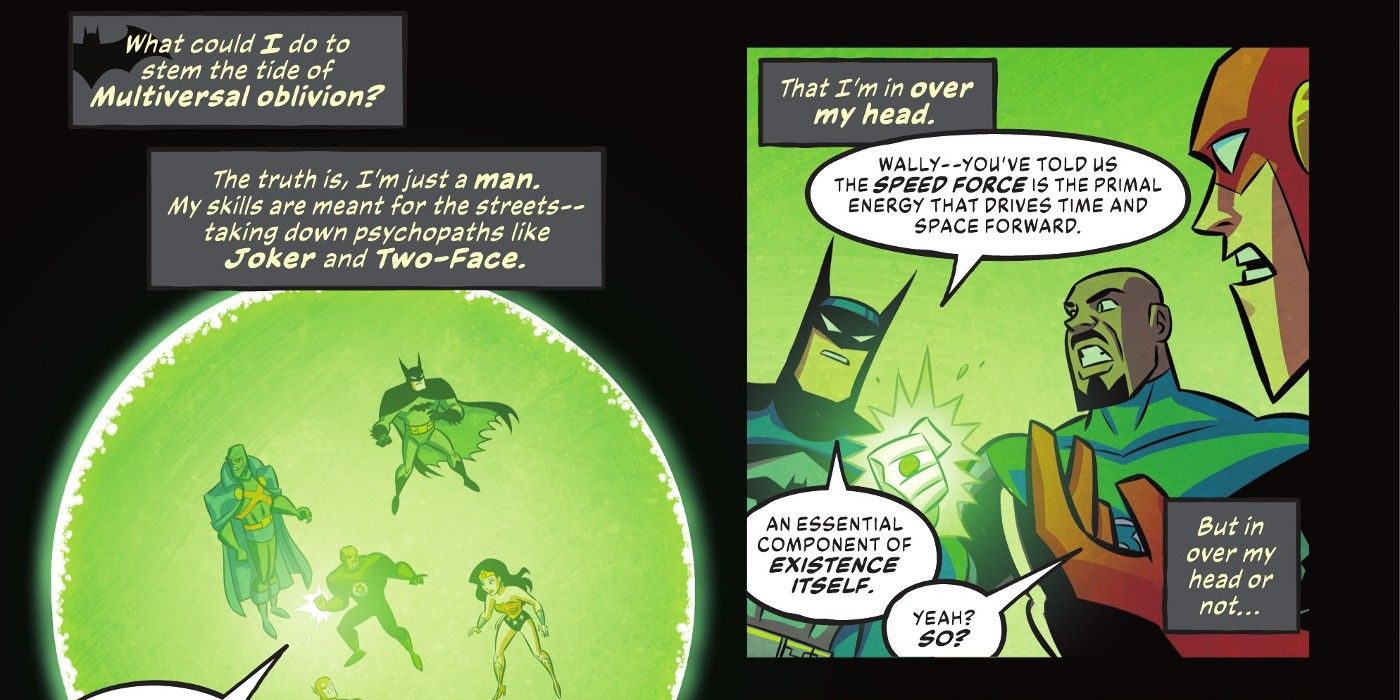 Five members of the Justice League were the only beings left in all of reality, and the heroes had to call on every ounce of strength to stave off their ultimate destruction. In the case of Green Lantern John Stewart, that involved calling forth every ounce of will. When it came to Wally West though, Batman asked him to tap into the Speed Force and talked about what it really is. The significance of this moment is that the source of the Flash’s power in the comics was never explored on-screen.

Many elements of the Fastest Man Alive made it into the series, with an entire story dedicated solely to him and his rogues in Justice League Unlimited episode “Flash and Substance.” For a while, many assumed that the Speed Force didn’t exist in the DCAU, as is apparently the case in the Young Justice animated series (which was confirmed by co-creator Greg Weisman). That changed in the episode “Divided We Fall.” When Wally went faster than he’d ever gone before in attacking the Brainiac Lex Luthor, he faded away. The League had to pull him out when he became one with the force that gives him his power, at which point he called it “a speed force” that was “calling him home.” Once that was over, however, it was never mentioned again.

This is part of the reason why was because Wally said he couldn’t go that fast again, or risk becoming one with the Speed Force permanently. Justice League Infinity confirmed that it didn’t end there. The allusion to the Speed Force clearly turned into research for the Flash, research that the speedster shared with Batman. Through this, it’s finally been confirmed that what was briefly alluded to in the show is the same Speed Force from the comics.

RELATED: The Flash Revealed a New Superpower – So Why Doesn’t He Know Anything About It? 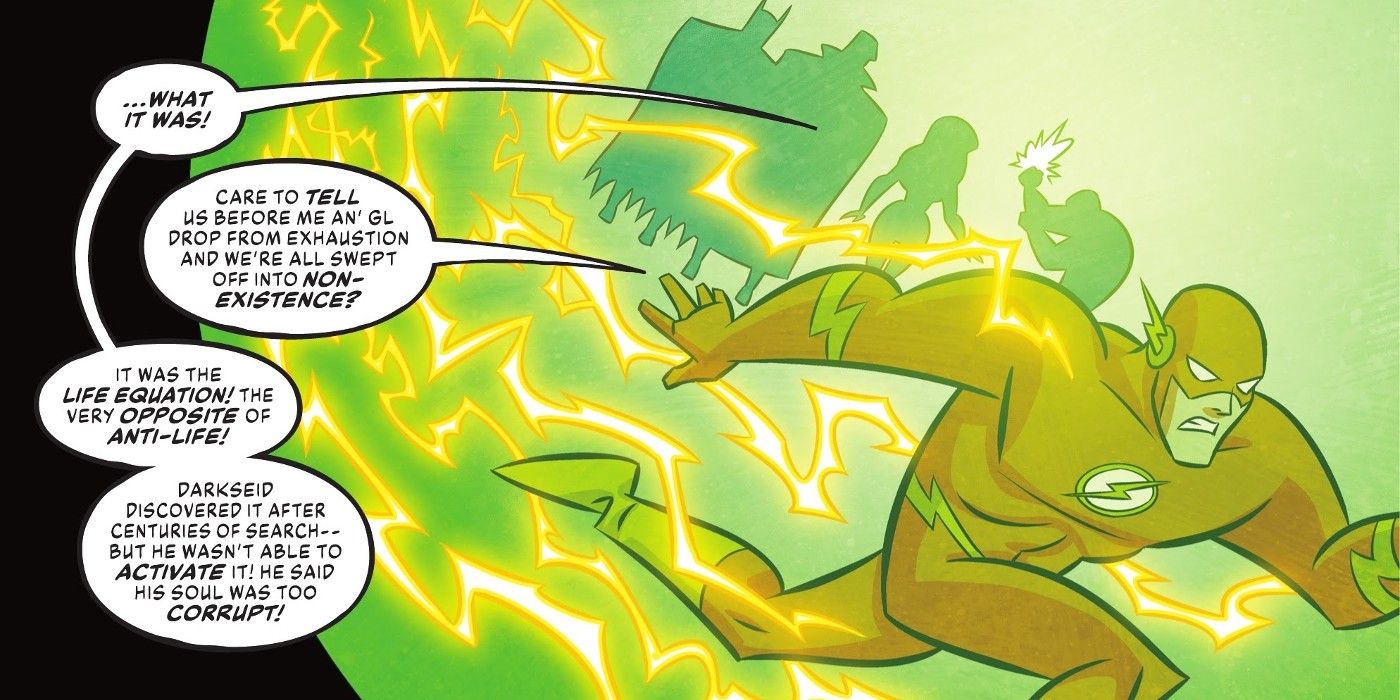 When Flash is running faster in this issue, he also gets his iconic Speed Force lightning. The only time it appeared in the show was during the same fight with Lex Luthor that briefly made him become one with the primal force. At that time, the lightning became wildly out of control, which Wally weaponized to separate the villain from Brainiac. Here, it was far more like the golden trail seen in the mainstream comics.

Justice League Infinity has cleared up one of the last mysteries of the DCAU. What was once a deeper part of the Flash lore, only alluded to in a single episode, has been confirmed as the force of nature it is in the comics. This adds something to the animated character that fans already thought might be there and is now confirmed. The fact Wally will only tap into it fully in the direst of circumstances, like the end of reality, further highlights its power, as well as its importance to the character as a whole.

KEEP READING: A Beloved DCAU Romance Was the Key to Unlocking One of DC’s Most Powerful Elements