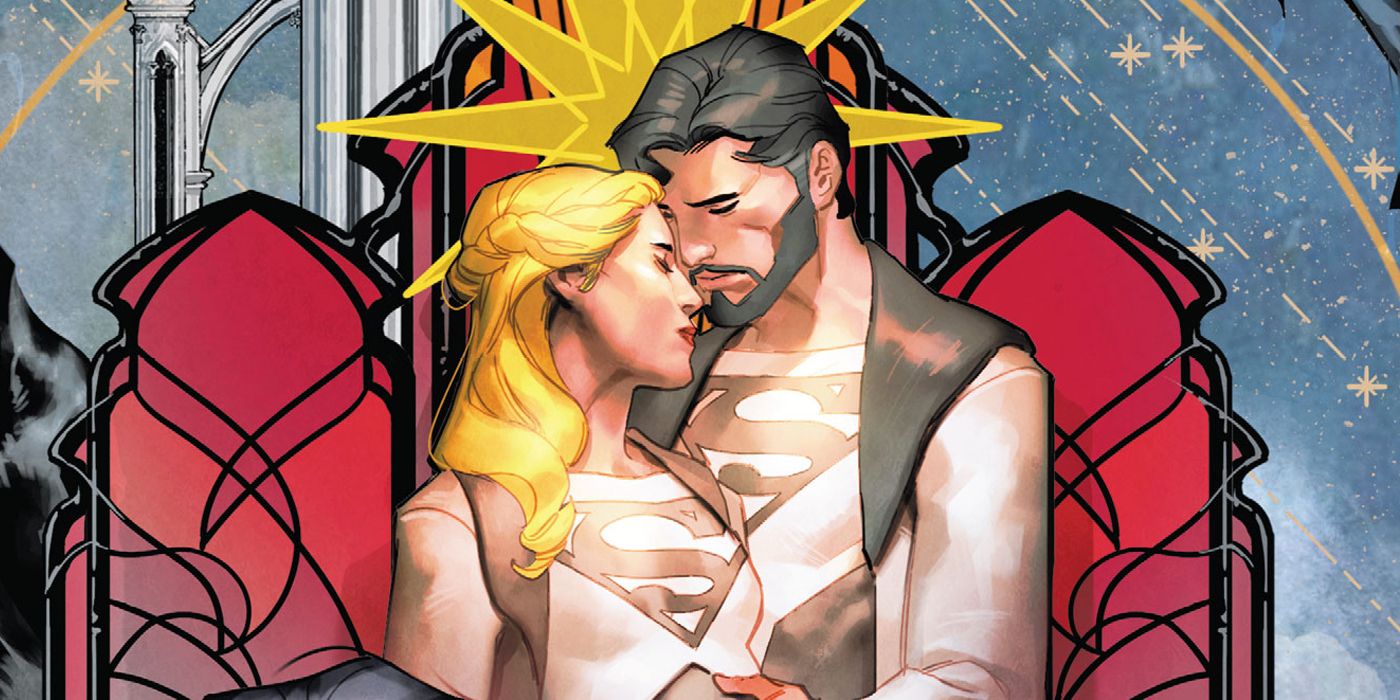 The extensive nature of DC’s omniverse and innumerable Elseworlds stories have put Batman, Superman, Wonder Woman and the rest of Earth’s greatest heroes in just about every situation imaginable. Now, Tom Taylor and Yasmine Putri’s Dark Knights of Steel throws the heroes into a brand new high-fantasy setting of epic proportions. The first issue introduces an alternate history of the DC Universe like no other, and solicitations for upcoming issues seem to suggest that there are plenty of surprises on the horizon.

Set in a world where Superman and his parents fled Krypton together and crash-landed on Earth during the medieval era, Dark Knights of Steel explores a world where Superman is raised by his birth parents and feudal politics are shaped by super-powered monarchs. Various heroes play important roles in this alternative history, but instead of building a utopia, their respective kingdoms teeter on the brink of all-out war. Yasmine Putri recently shared some uncolored preview pages from Dark Knights of Steel #3 and spoke with CBR about the process of designing the series with Tom Taylor, her fantasy influences and her art process. 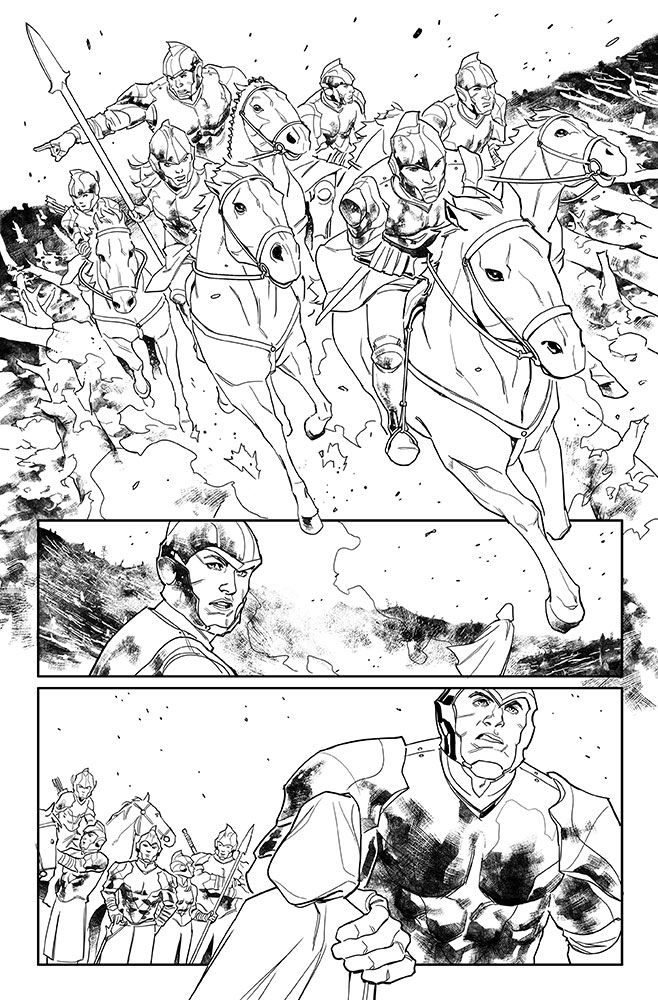 CBR: Fans are well acquainted with your cover art, but this is the first time you’ve been the main artist on a DC series. Was it freeing to be able to make your debut outside of DC’s main continuity?

Yasmine Putri: As I’ve never done any interior work of a similar scale before, I can’t really compare impressions, but for me personally, creating a story outside of continuity, debut or not, opens up the chance to explore new grounds and untapped potential. So yes, there is an element of freedom in that. The downside is there’s always another batch of assets to build nearly from scratch at the most inopportune of times, so I suppose in the end it all evens out.

How did you and Tom Taylor Collaborate to build the world of Dark Knights of Steel?

I suppose it’s a kind of a top-down approach instead of a ground-up, where we started out working on redesigns of the existing DC characters that will appear in the book first, as a point of reference. Once we got the look of the characters set, I started to expand the world and create the settings and places for them to interact in.

As familiar as these heroes are, there’s something very alien about the setting they’re appearing in. How did you capture the spirit of these classic characters while making them feel like natural parts of their new environment?

I imagine that aside from the environment, for readers it’s also a jarring enough change seeing sleek spandex replaced by bulky layers and armor. So I tried streamlining the look and not making the details too busy so the characters could be easily recognizable. I chose the most familiar or iconic parts of the look they have in continuity — for instance, colors and typical accessories one would instantly associate with the character — and translated those into an iteration that wouldn’t look too out of place in the medieval world, unless it’s intentional. 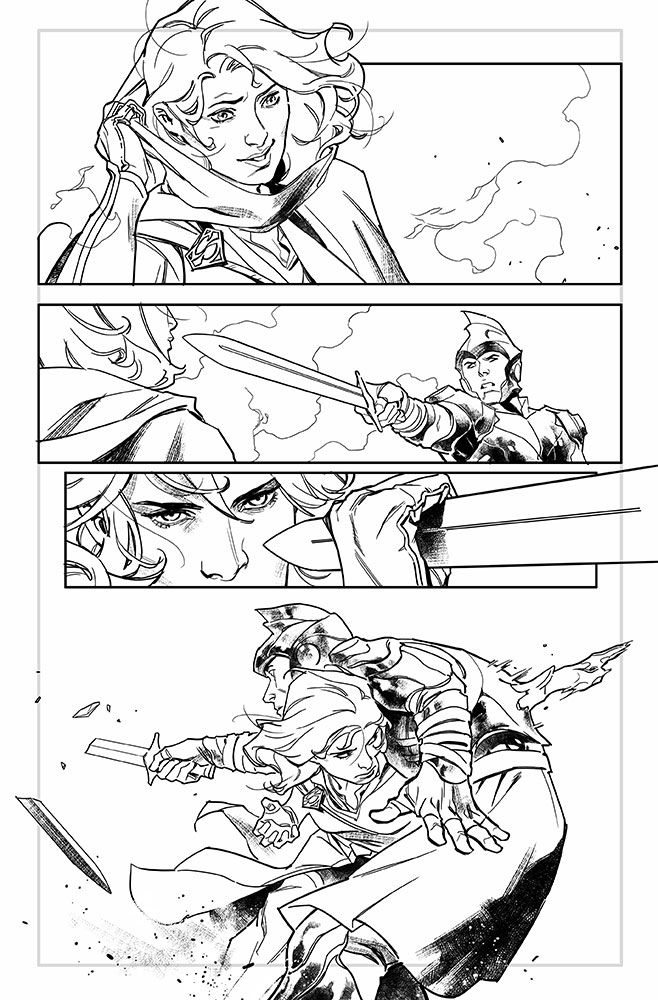 Which characters were the most challenging to design for the medieval setting?

The Amazons took a long time to get right. They’ve already got this fantasy-warrior look in nearly every iteration across multiple media, and so it was more challenging to find a design that’s familiar enough to how everyone usually sees them — swords and circlets and leather skirts — but still has a novel enough feel to be original. Batman, on the other hand, was one of the simplest to redesign, as medieval fantasy worlds are already typically populated with pouches and capes!

What other pieces of the DC Universe would you like to explore through this fantasy-oriented lens?

I imagine a horror or supernatural story like Swamp Thing or Justice League Dark set in a fantasy world would be interesting — expanding existing lore and focusing on stories that are more occult in nature, turning them into a kind of their own mythology.

What Sword and Sorcery stories did you look to for inspiration for this series?

Dark Knights of Steel has a more grounded medieval fantasy feel, so design-wise I usually refer more to existing places and costumes throughout history. Also, not really an inspiration because it has a decidedly different mood and tonality, but I got to read The Last God by Phillip Kennedy Johnson and Riccardo Federici last year and loved it.

Related: Thor and Batman Have One Very Disappointing Thing in Common 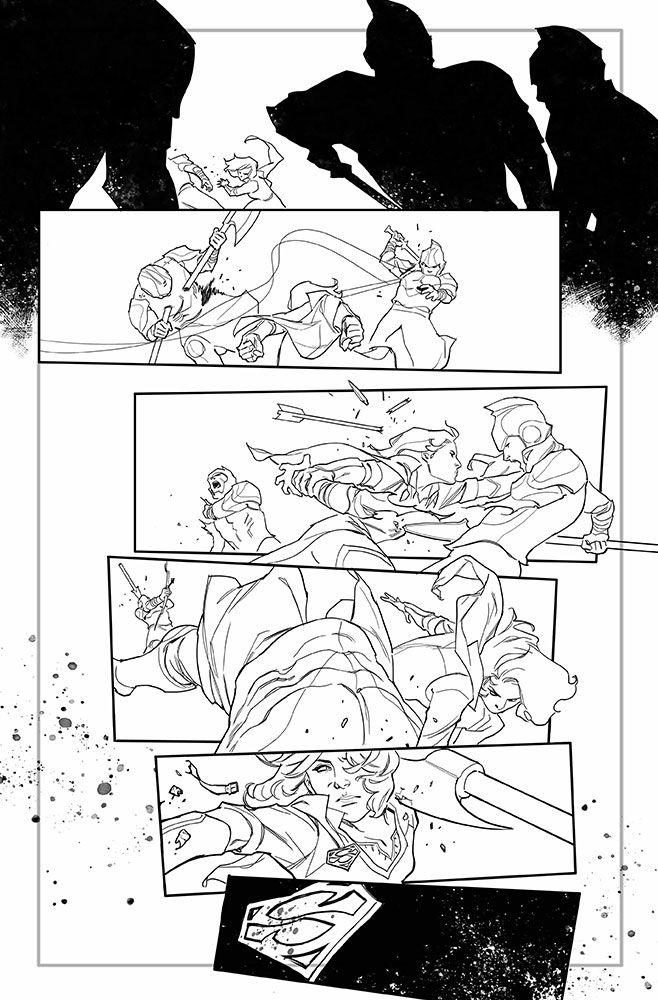 You provide the art and colors for the first issue of Dark Knights of Steel, but in issue #3, you’re joined by colorist Arif Prianto. How does working with a colorist affect the way you approach the work?

With issue #1, I started out with plain linework and sometimes just a sketchy “idea” of a background. The linework didn’t have to be what would typically be described as “finished,” since as a painter, I’m going to be the one filling everything else in anyway. However, with a colorist involved, that level of finish during linework is expected. Now, I greyscale, ink, draw actual backgrounds and provide references if needed. It’s opened up a completely new branch of skill sets and has helped me understand the industry’s typical art process better. As an established colorist, Arif brings fresh insight to the coloring process along with his own approach, so we communicate a lot to make sure a smooth workflow remains in place.

What are you most excited for readers to discover as the series progresses?

I think it’s the new places for readers to discover as the world expands, along with previously unexplored nooks and crannies of existing ones. For instance, yes, we’ve seen the El castle’s throne room, but have we seen Superman’s cape room? Alfred’s kitchen? Batman’s broom closet? So there are many unexplored possibilities, and I hope readers would be on the lookout for those — I know I am!

Dark Knights of Steel #1 is available now from DC Comics. The final order cutoff date for issue #3 is Sunday, Nov. 5.