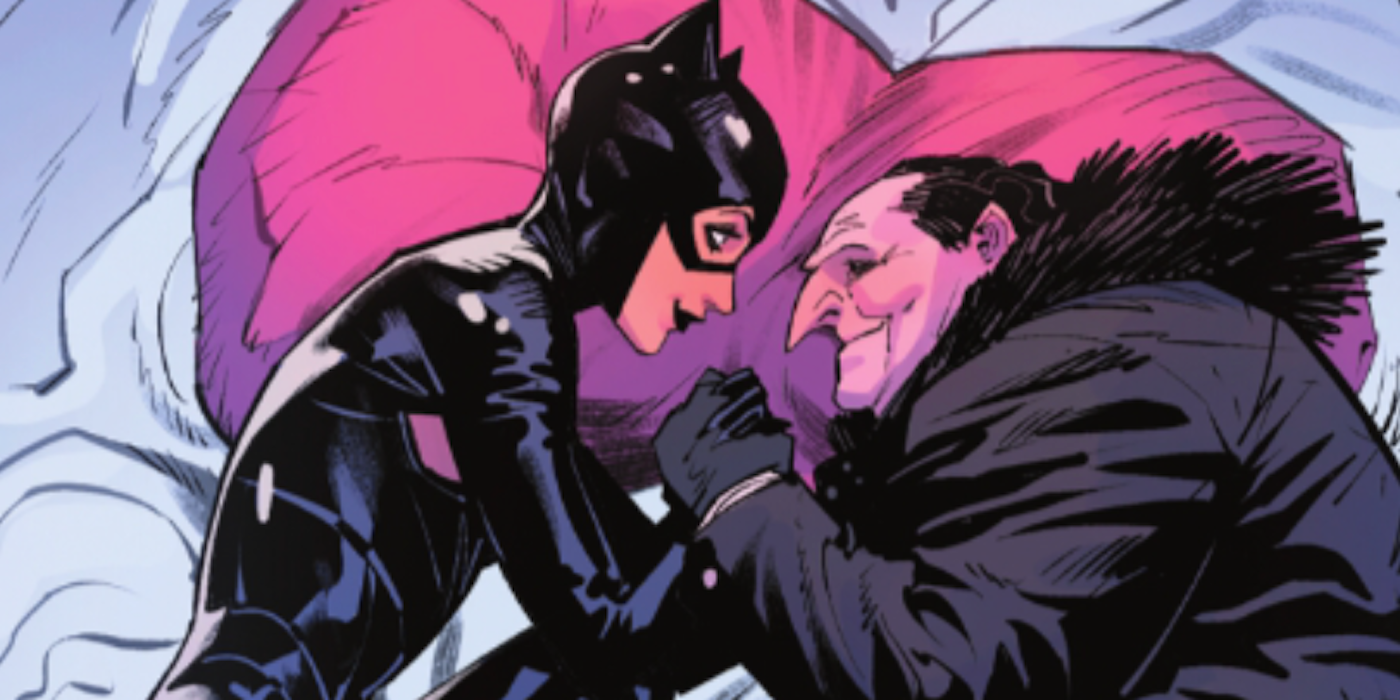 The most hyped-up story from the 100-page Gotham City Villains Anniversary Giant #1 has been “Bird Cat Love,” a 12-page story written by Danny DeVito and illustrated by Dan Mora. This story involves a rather surprising romantic and heroic pairing: one between The Penguin/Oswald Cobblepot (whom DeVito played in the movie Batman Returns) and Catwoman/Selina Kyle.

“Bird Cat Love” begins in the Gotham City suburbs, introducing itself as taking place in “Another Time, Another Place” in acknowledgment of its own non-canonicity. Some kids are playing in the streets and are saved from an oncoming car by The Penguin. Meanwhile, Catwoman rescues a hatchling bird that has fallen out of its nest. These initial acts of casual kindness come as a shock; while Catwoman sometimes takes on an antihero role, The Penguin has pretty much always been a straightforward villain.

Catwoman and The Penguin are then shown together in bed, drinking, kissing and discussing their next big plans. They end up robbing a bank together, then escape on a boat to complete an even more ambitious heist in Monte Carlo. But this isn’t simply about money — this is all a setup for a surprisingly effective plan to steal vaccines from pharma companies and distribute them equitably around the world, ending a pandemic. The people of Gotham are baffled by the ordinarily villainous duo’s actions, but one of the kids whom The Penguin saved at the start of the story understands what’s happening: “The bird and the cat are in love, silly! It’s as simple as that!”

The story concludes with Catwoman and The Penguin living happily ever after, adopting three penguins and three kittens as their own. The narration gives the impression they’ve committed to heroic acts: “The great thing for us is that there will always be a bad guy to beat. That’s human nature, being driven by fear and greed. It gives us the opportunity to make the lives of the usurpers and the cheap crooks of the world deeply miserable.”

RELATED: The Batman Getting a Penguin Spinoff Series at HBO Max

Altruistic, anti-capitalist heroism is a new look for The Penguin, who is typically depicted as greedy and self-interested. This alternative take on the character in many ways reads like a personal fantasy for DeVito, an actor who describes himself as a Democratic Socialist. It seems unlikely this version of Oswald Cobblepot will ever make its way into the mainline DC canon, but it makes for an entertaining one-off short story.