Don’t look now, but Polish-expat-in-Holland Pier Dola is quickly staking out a strong claim for the title of our most incendiary contemporary cartoonist. Last year’s From Granada To Cordoba was a combustible mix of the scatological, the scabrous, the vile, the repugnant, and the hilarious, all in service of one of the bleaker and more inarguably (as well as depressingly) accurate statements of existential nihilism committed to the comics page in recent memory, and it’s no exaggeration in the least to say that his follow-up, a 500-page beast entitled Corona Bible, recently unleashed upon a nowhere-near-ready-for-it public by the same publisher, not only picks up where that one left off but dials the overall tone up to 11 – at least.

All of which means, to follow horrible review form and give away the game early, that this critic, twisted specimen of humanity that I am, loved it – but that I really can’t in good (or any other type of) conscience hold it against you if you don’t. After all, not only does its sheer length (as well as its weight) present a formidable challenge, so does its subject matter, given that it drops us all in at the deep end of a period of time most of us would just as soon forget. Welcome back then, gentle reader, to the land of the lockdown – and while I’m tempted to go even further into the realm of the pithy and insufferable by saying “nice place to visit, wouldn’t want to stay,” who are we kidding? It’s most assuredly not a nice place to visit, and as Dola so brutally but truthfully reminds us, most of the uglier attributes of the human condition that the COVID-19 pandemic brought into sharp focus have, in fact, stayed with us since the various and sundry restrictions on our purported “freedoms” were lifted. 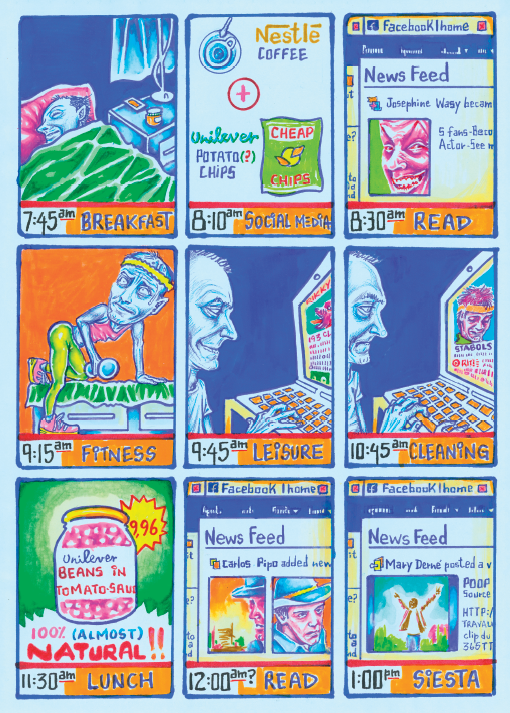 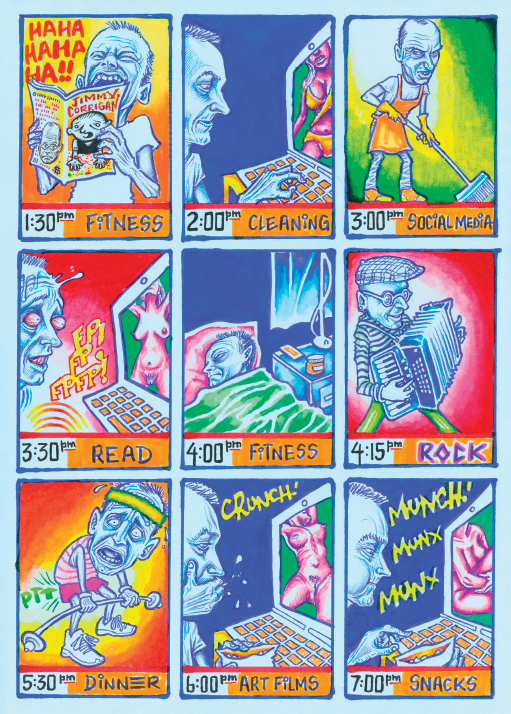 Still, if you can’t laugh at what a bunch of assholes COVID made of so many of us, what can you laugh at? And Dola’s exaggerated, literally monstrous approach to classic MAD-influenced caricature does lend itself quite well to humor – as do further flourishes such as his utilization of “video nasty”-style fictitious VHS box covers to denote his chapter breaks. And let’s face it: when you’re dealing with something as relentlessly bleak as a global pandemic and mankind’s disjointed, haphazard, oftentimes incompetent, and perhaps even more often paranoid reaction/response to it, any respite is a welcome one. Otherwise, what we’d be looking at it here would be an interminable slog of depression, loneliness, financial and social insecurity, porn addiction, lackadaisical hygiene, physical and mental deterioration, technologically-engendered laziness, and fever-swamp conspiratorial histrionics – which, okay, it is, but it never forgets how patently absurd all of that is, and that’s crucial.

To that end, I think Dola’s intentionally garish color choices and his exaggerated emphasis on facial expressions and body language play a key role in keeping these proceedings less conceptually onerous than they probably by rights deserve to be, and the circular arc of his loose narrative—returning as it does to alight on Illuminati-esque conspirators; an increasingly repulsive shut-in (who belies certain hallmarks of being at least something of an authorial stand-in); a family directly affected by the virus in the most tragic manner possible; and even British PM Boris Johnson(?)—has a habit of being far more engaging than one would necessarily expect going in. It might be a reach to call the book a “page-turner”, true, but once you’re committed to going with its flow, that flow turns out to be rather a brisk one. 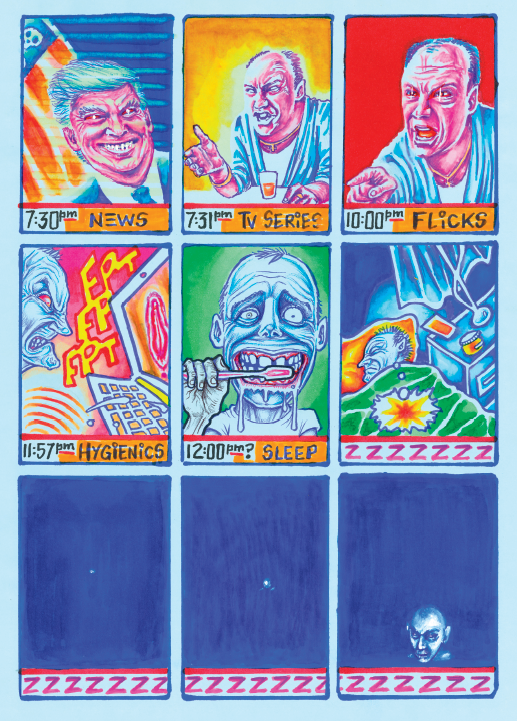 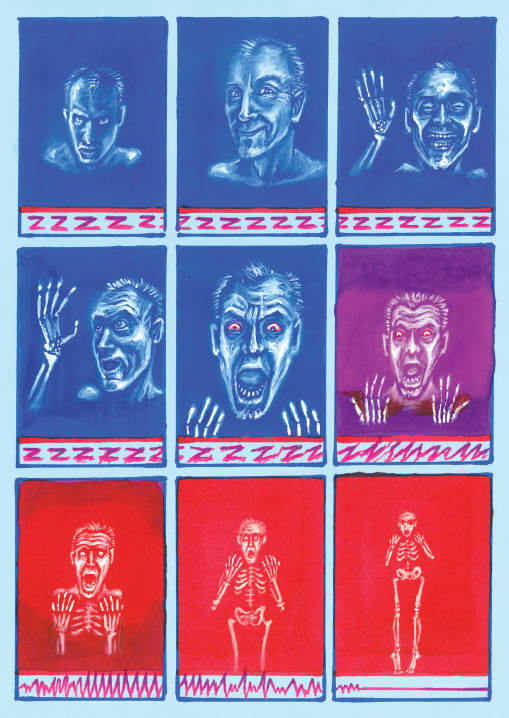 Dragging things back to something touched on a moment ago, we may as well address the one aspect of this deliriously and deliberately offensive tome that might give even those with a cast-iron constitution a bit of pause, namely: the conspiracy stuff, and specifically Dola’s choice to trade in tired anti-Semitic tropes to at least some small degree. In the early going here, we’re shown a Bilderbergish meeting of global financial and political elites who are actually creating the pandemic, and among these folks is a vampiric representative of the Rothschild banking family who is clearly visually designated as such, and this strikes me, and I’m sure is likely to strike many others, as playing into every noxious “rich Jews secretly control the world” stereotype one can imagine – and while it’s true that the scene in question is broad-stroke satire, at a time when anti-Semitism is on the rise globally in its latest guise as QAnon, I have to wonder if it may not have been better to leave this Rothschild stuff out, much as I’m loathe to protect the interests of ANY wealthy person regardless of their religion, ethnicity, etc. I mean, sure, having Tom Hanks seated among the power brokers plotting the deaths of millions makes it clear we’re not meant to take any of this at face value, but it’s probably worth remembering that Hanks is another favorite target of the QAnon crowd, who, for reasons known only to them, believe he is a pedophile who drinks the blood of babies – which is, lest we forget, the original blood libel against Jewish people going all the way back. 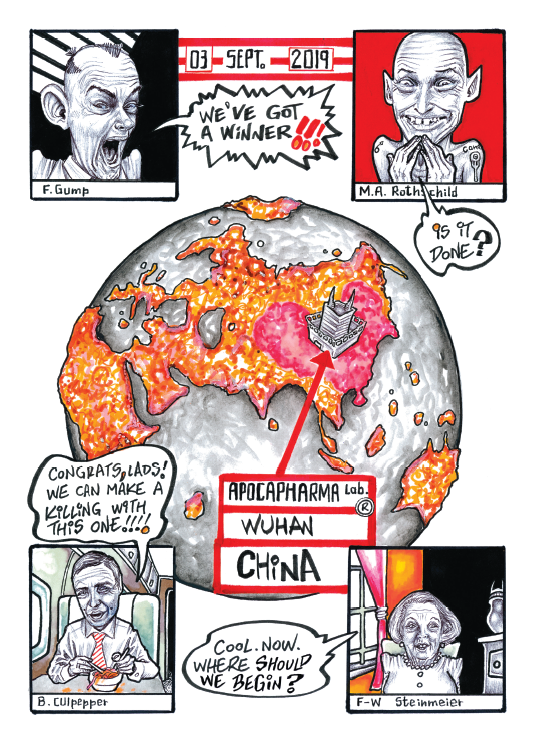 I’m not suggesting that Dola is “guilty” of anything here – over, above, or beyond not considering the full implications of the kind of outrageously over-the-top tone and tenor he’s striking with this intentionally combustible material. But I think the valid points he raises about the Bezoses of the world profiting handsomely off the last couple of years of human misery are rather undercut by this entirely unnecessary, even-a-bit-clumsy sidestep into the more repugnant quarters of an already-repugnant quarter of society. And while there’s an argument to be made that ignoring this bigoted stupidity would mean Dola is abdicating his self-imposed responsibilities in terms of taking a comprehensive view of the pandemic and its resultant societal ripple effect, I can’t help but feel there was probably a smarter way to go about it than he chose to here. 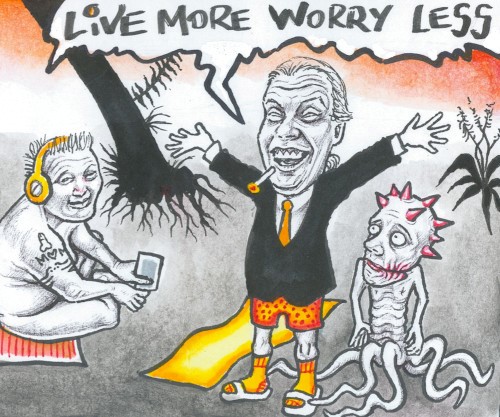 In the grand scheme of things, however, it has to be said that Dola’s crafted a harrowingly effective portrait of the crisis we’re only now—and perhaps only theoretically—emerging from, one that encompasses the global and personal ramifications of it all nearly equally and takes no prisoners nor gives any fucks as to who it rankles. If at times its artistic choices are as troubling as the events it portrays, perhaps that’s to be expected – after all, imperfect messengers are often best-qualified to deliver decidedly imperfect messages. Corona Bible may not be a comic anyone necessarily wants to read right now, but it’s damn sure not one you’re ever likely to forget if you do.

The post Corona Bible appeared first on The Comics Journal.