If I don’t overly like this story in cartoon form–and I don’t–it’s at least in part because, out of all the character designs here, the nephews’ are unquestionably the most hideous: 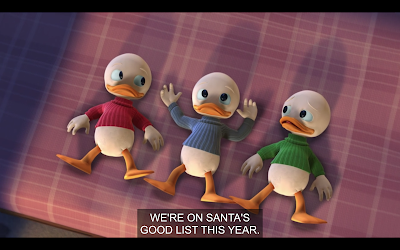 BWAHAHA!  Merry Christmas.  Seriously, HOW DID THIS HAPPEN?  And if this was the best you could do, why did you go ahead and release it?  Just chalk it up as a learning experience and destroy all hard drives containing this footage.  Come on.

The reasons I don’t like the story in comic form are different, but…they are still very much present. 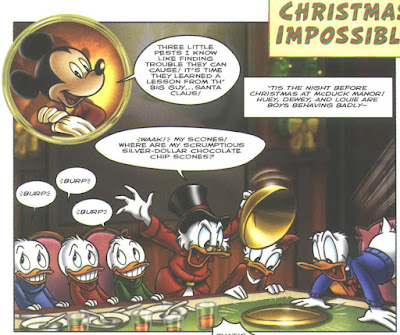 In comments to the previous post, David noted that he was operating under severe space limitations, and you can see that here probably more than anywhere else.  In the cartoon, there’s a whole sequence before this opening of the kids causing havoc and stealing Scrooge’s cookies, which here–appropriately–have become scones (I guess they could have been scones then–I don’t know if it was specified and I don’t want to go back and look but–well…scones.  enjoy them in good health.  Let it be noted that giving ducks teeth always makes them super freaky-looking.  I don’t understand how this happens: surely the artists can SEE what they hath wrought? 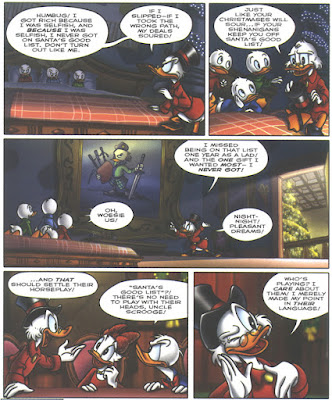 Hmm…”I never got on Santa’s good list” becomes “I missed being on that list one year as a lad.”  A little screw-up here, though either way, eyebrows are raised.  If he NEVER got on the list, we have to wonder what kind of horrible kid he was, and if it only happened one year, we’ve gotta think, well, if you wanted this gift so much, why didn’t you just put it off ’til the next year?  In the cartoon, he’s a lot more explicit about how it’s bad to be obsessed with money.  I think the authors realized that this didn’t quite work with his character, but they went with it anyway.  What the hell.  The writing here is definitely better, even if it can’t exactly save the story.  Could anything?

I will say that as far as Scrooge’s contradictory stories here go, if we want to be a bit conspiratorial, we can justify it: Scrooge really IS just fucking with the kids to try to get them on the straight and narrow, and he just didn’t quite keep his story straight.  Also (as become relevant later on), he’s conspiring with Santa to uphold this story.  Is this an overly baroque conspiracy theory?  Yeah, well, maybe I’ve been listening to too much Knowledge Fight lately.  But I like this version better than the one we’re actually given. 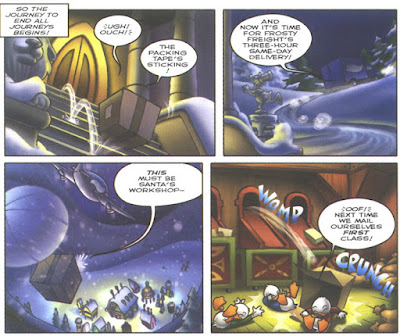 Anyway, they get the idea that they should go to the North Pole to put their names on the “nice list.”  Seems dubious to me, but did anyone ask me?  I doubt it! 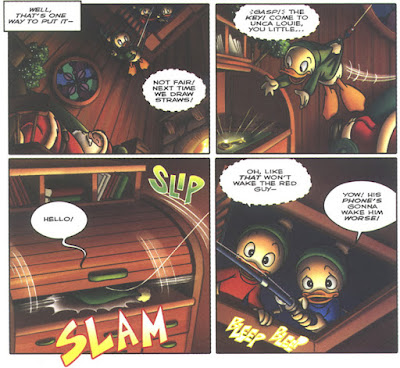 They’re trying to do this mock spy-movie sort of thing, so we get a lot of these hijinx which, I suppose I should make some stab at objectivity, probably aren’t too terrible but which I don’t find interesting either.  La. 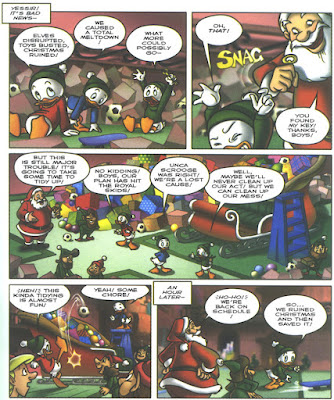 There’s a lot more in the cartoon about this clean-up, and also a talking prisoner doll that sounds like Edward G. Robinson (each one comes with a key, you see, leading to confusion about which is the real one).

I just want to point out that this story (this is in the cartoon, too), we get a festive joke about barfing.  That is all. 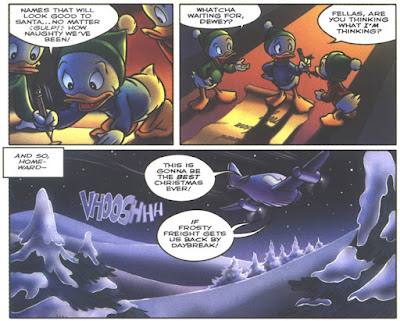 You can guess what’s happening.  It’s a sort of thing that might be legitimately heartwarming if it happened in a better story like this with better depictions of the characters. 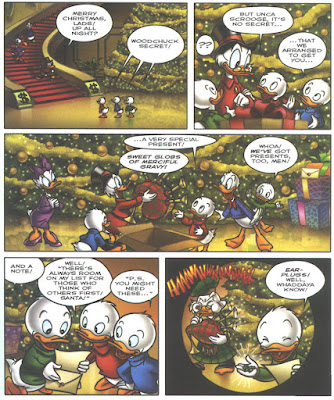 In the cartoon we actually get to SEE HDL’s gifts.  Not that they’re that exciting, but it does add something to the story that we miss here.  One of them gets one of those prisoner dolls.

I believe I’m on record as being opposed to hacky jokes about how much people hate bagpipes and/or accordions.  Because they don’t.  But even if they did, it would still be the laziest shit imaginable–even more so than usual here, because the writers clearly just thought, hmm, what would Scrooge want more than anything?  Scottish so bagpipes.  Blah.  Way to hit us with the delightful surprises, ya jerks!  Not that I know what Scrooge’s most cherished unfulfilled childhood with should’ve been.  It seems probable that this whole premise was a non-started.  As I say, I prefer my imaginary version where this “Scrooge’s secret wish” thing is just a plan cooked up with Santa.  Therefore, in my capacity as a guy who write a blog, I declare that to be the truth.  You are very welcome.

A Paradise for Holiday