I suspect Federico García Lorca is not particularly well-known in the United States. First, he’s a poet, and outside of a poet laureate or two and whomever was anthologized in high school literature classes, poets-that-can-be-named probably number five or fewer. Second, he had a brief career, cut short when he was executed by a Spanish Civil War firing squad. Third, he lived in Spain and wrote in Spanish, and if there’s one thing an American reader neglects more than poetry, it is poetry written in a language other than English.

Yet here we have New York’s NBM publishing a translation of an illustrated version of Lorca’s Canciones. The illustrations and translation are by Dutch artist and dancer Tobias Tak who passed away in 2020.

A deceased Dutch artist and dancer illustrating and translating Spanish poems from the early 20th century for a 21st century English-speaking graphic novel audience? Yes, exactly. This is a specific project that seems to gratuitously flaunt its status as a decidedly uncommercial product. 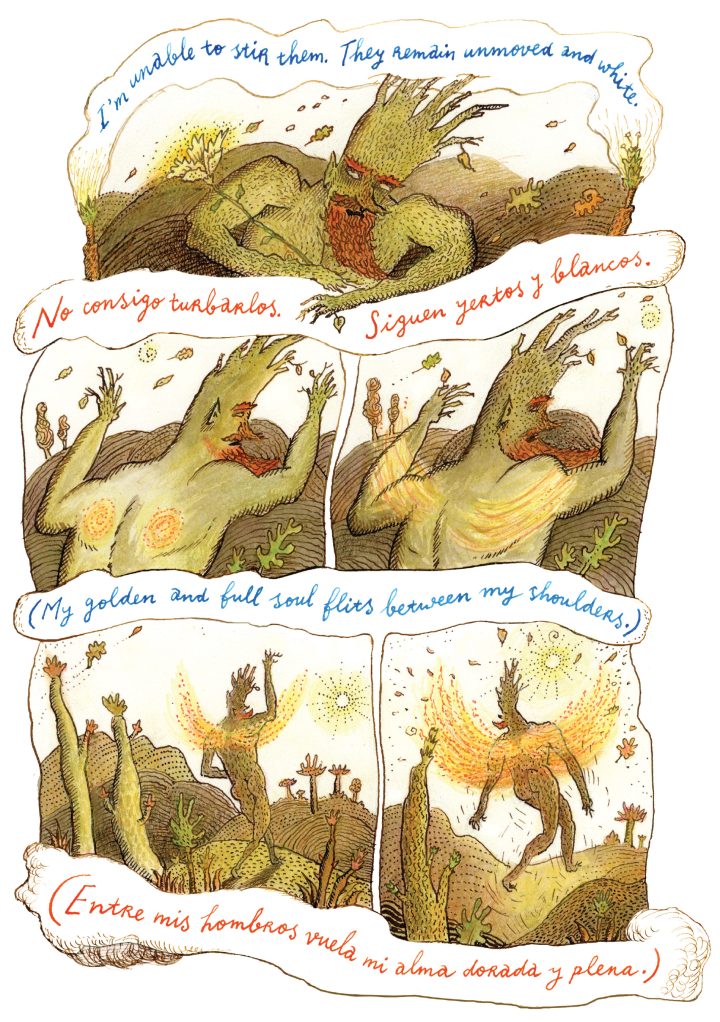 Neither the Canciones of Frederico García Lorca nor Tobias Tak care whether or not this thing sells. NBM does, I’m sure, and they have published it as a beautiful volume. It’s beautiful in its production values (complete with a ribbon bookmark sewn into the binding), in its defiance of the commercial norms for graphic novels (this is not a genre piece or a memoir or a serious retelling of a serious true story), and in its whimsy and artistic exuberance (this thing looks like a storybook with hidden secrets).

Another way to frame this volume of Lorca’s Canciones by Tobias Tak is to say it’s a Gary Panteresque adaptation of poems written by one of the guys who was part of Salvador Dali’s crew. The marketing doesn’t push that angle, but it’s accurate. Lorca was part “Generation of ‘27” along with Dali and Luis Bunuel. Lorca was a gay, leftist surrealist.

Tobias Tak’s adaptation isn’t merely a batch of typeset lines of verse accompanied by drawings. Tak, very much in the vein of late-period Gary Panter at his most supernatural and dream-like, etches full pages and panel sequences in ink with delicate colors on every page. Tak also incorporates the Lorca verse into the drawings, hand-lettering the poetry in both English and Spanish throughout the volume. Canciones is a masterful work, a collaboration across generational and international lines. 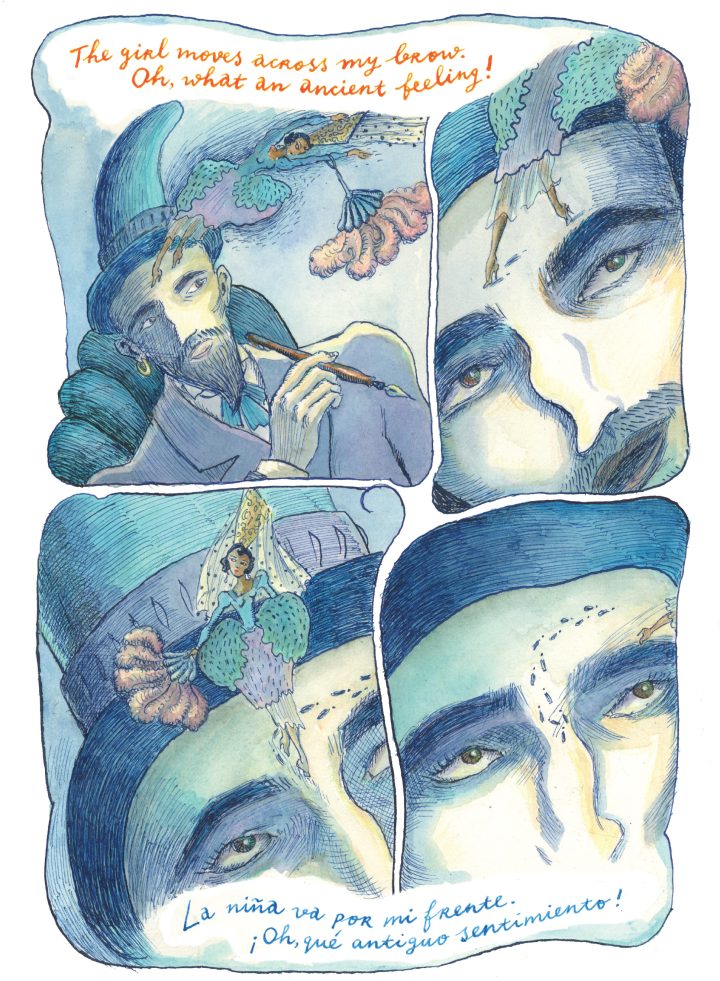 Though you might think the poetry of a writer killed by a fascist regime would be daringly political, the poems in the Canciones are pastoral, fabulist, imaginative, and exotic, but not directly political. Nature is the subject of these verses, and Lorca is particularly suited for Tak’s fanciful artistic adaptation not just because of his subject matter but because his poems are short and evocative.

That’s the entire text of the poem “Fabula / Fable,” by Lorca. Tak illustrates the verse with Panteresque-and-Seussian landscapes and characters depicted as if seen out of the corner of Sir John Tenniel’s eye. The approach Tak uses throughout the book is to depict Lorca’s surreal poems literally, but with recurring images and character designs from Tak’s own imagination. There’s an interplay here between Lorca’s lines and Tak’s hallucinogenic renderings, challenging the reader’s desire to make literal sense out of the poems and yet providing a guided tour to a place of acceptance where the reader can release such analytical desires and succumb to the pleasure. As critic Phillippe Lacoue-Labarthe says, “Poetry is experience.”

My favorite of Tak’s adaptations of Lorca’s poetry in this volume are “Primer Aniversario / First Anniversary” where a two page silent prologue of moonlight sailing and the appearance of a blue fairy leads into “The girl moves across my brow. Oh what an ancient feeling!” as the heels of the apparition dig into the forehead of the speaker, and “Despedida / Farewell” where a bee-man explores the landscape and flies across a farmer harvesting wheat while images of Anubis shift across the farmer’s tattooed face. “If I die, leave the balcony open!” is the final line, as the strange landscape looms into the distance. Any of these four-to-six page adapted poems, so wonderfully interpreted by Tak, could be printed as saddle stitched individual volumes at your local indie Comics Art show and they would be the talk of the convention for their audacious beauty. 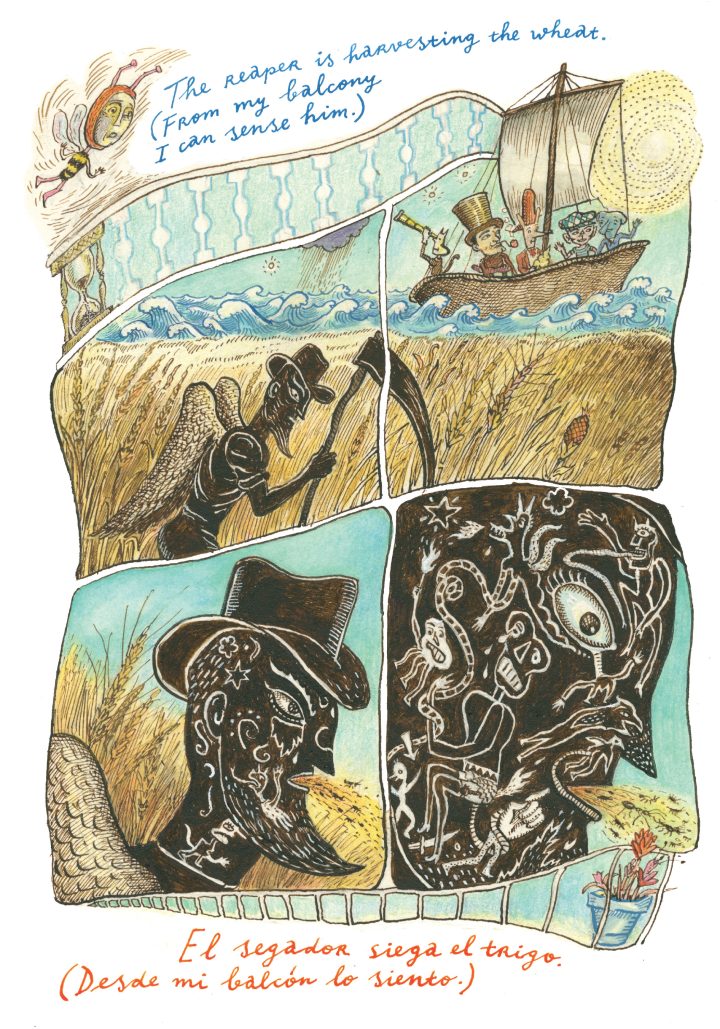 Collected as a whole in this Canciones volume, Lorca’s poems by way of Tobias Tak are overwhelmingly delightful and haunted by the specter of the death of both the poet and his artistic interpreter. If you can forgo the need for narrative cohesion – though Tak does provide some visual stitching of the disparate poetic subjects – this book will be an experience you will likely want to revisit.

The post Canciones: Of Federico García Lorca appeared first on The Comics Journal.