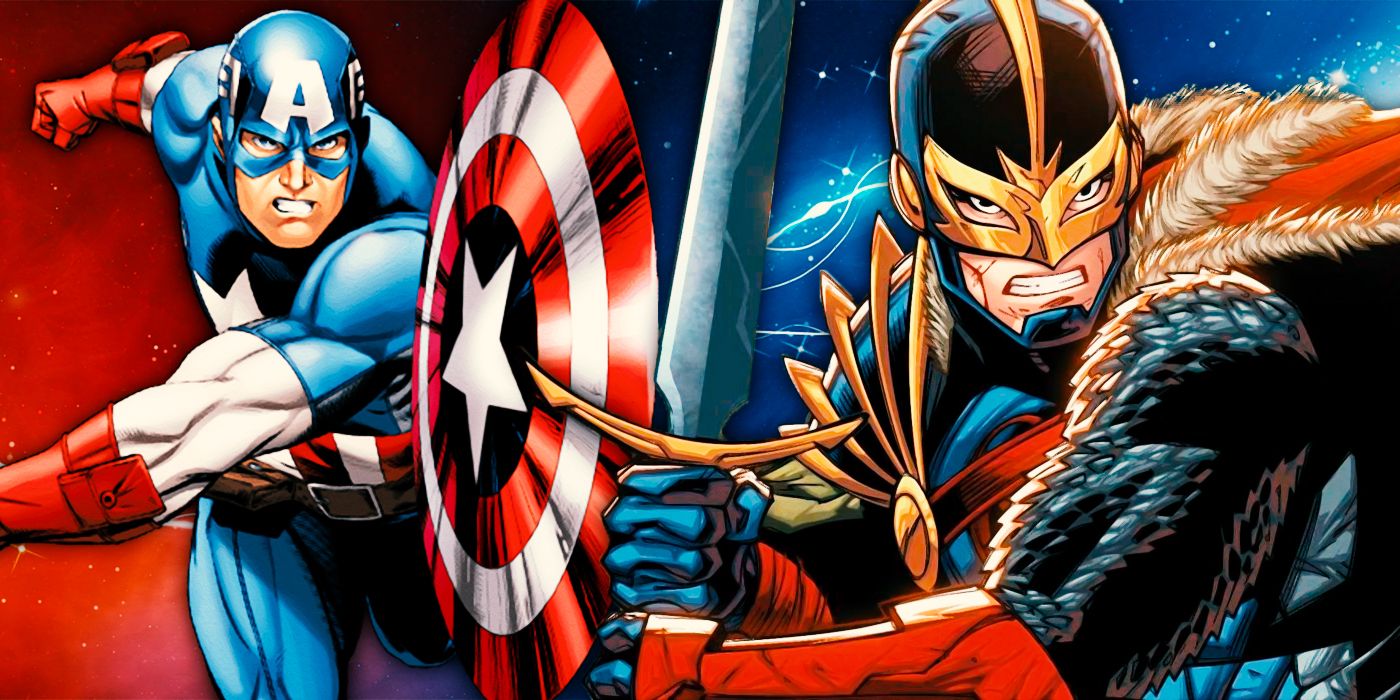 Today, we look at whether Black Knight’s Ebony Blade would be able to cut though Captain America’s shield.

In Comic Book Questions Answered, I answer whatever questions you folks might have about comic books (feel free to e-mail questions to me at brianc@cbr.com).

Reader Hunter S. (who always has interesting questions about Captain America’s shield. I’m sure I’ll feature some more of his questions in the future) wrote in to ask, “Can the Ebony Blade cut through Captain America’s shield? I can say for a lot of marvel fans when I say that the shield is tough with it being able to withstand almost anything from the claws of Wolverine to the Nova Flame of the Human Torch to the mighty Thor’s Mjolnir. The Ebony Blade is a magical sword made from a Starstone meteorite by Merlin. That allows the blade to have a lot of properties including being immune to magic, coming back to the wielder like Mjolnir, absorbing energy, and cut through virtually anything. What I’m asking is can the Ebony blade, a virtual equal to Excalibur, slice through the proto-adamantium that makes Captain America’s shield one of the most powerful weapons made on earth?”

Hunter also included one line that I’ve temporarily excised so as to not spoil anything. Before I really get into Hunter’s question, I just wanted to take a moment to make an aside about how stuff like “Can item X cut through item Y?” questions are funny, not because of the questions themselves, but because of how anything like this just highlights how unsettled all of this really is. Like I did a bit recently about whether Batman had ever met Midnighter. I answered correctly that, no, he had not. Then Batman met Midnighter a couple of months later. Similarly, if Writer X does a new comic book tomorrow where some guy discovers a sword made out of, let’s say, Crumplax, that was left on Earth by a long-ago alien race and it can cut through ANYTHING then, well, that would be it, right? Crumplax would be the strongest metal around, this Crumplax sword would pop up at the top of lists of the most powerful swords on CBR or wherever (take THAT, Sword of Superman!) and all because some writer in 2021 decided to have a comic where they said Crumplax was the top metal. That just amuses me for some reason. On to the question!

No, Black Knight received his Ebony Blade after Captain America had left the Avengers (during a period where Stan Lee insisted that the biggest Marvel heroes remain off of the Avengers. Roy Thomas would get around this ban by having the “Big Three” of Captain America, Thor and Iron Man just make regular guest appearances in the book until eventually Thomas just had them all rejoin outright as it is possible that Lee just no longer minded as much after X amount of time with them out of the series. After that, they were allies during Black Knight’s first extended stint as a member of the Avengers in the 1980s.

They DID a have a conflict in Black Knight’s ECOND extended stint as an Avenger, in Avengers #363 (by Bob Harras, Steve Epting and Tom Palmer, as part of Harras’ long-running subplot about how the rest of the Avengers were growing tired of Captain America seemingly looking down on the rest of them for not being as pure in heart as him), but Black Knight had traded in the Ebony Blade for a photon blade by that point… 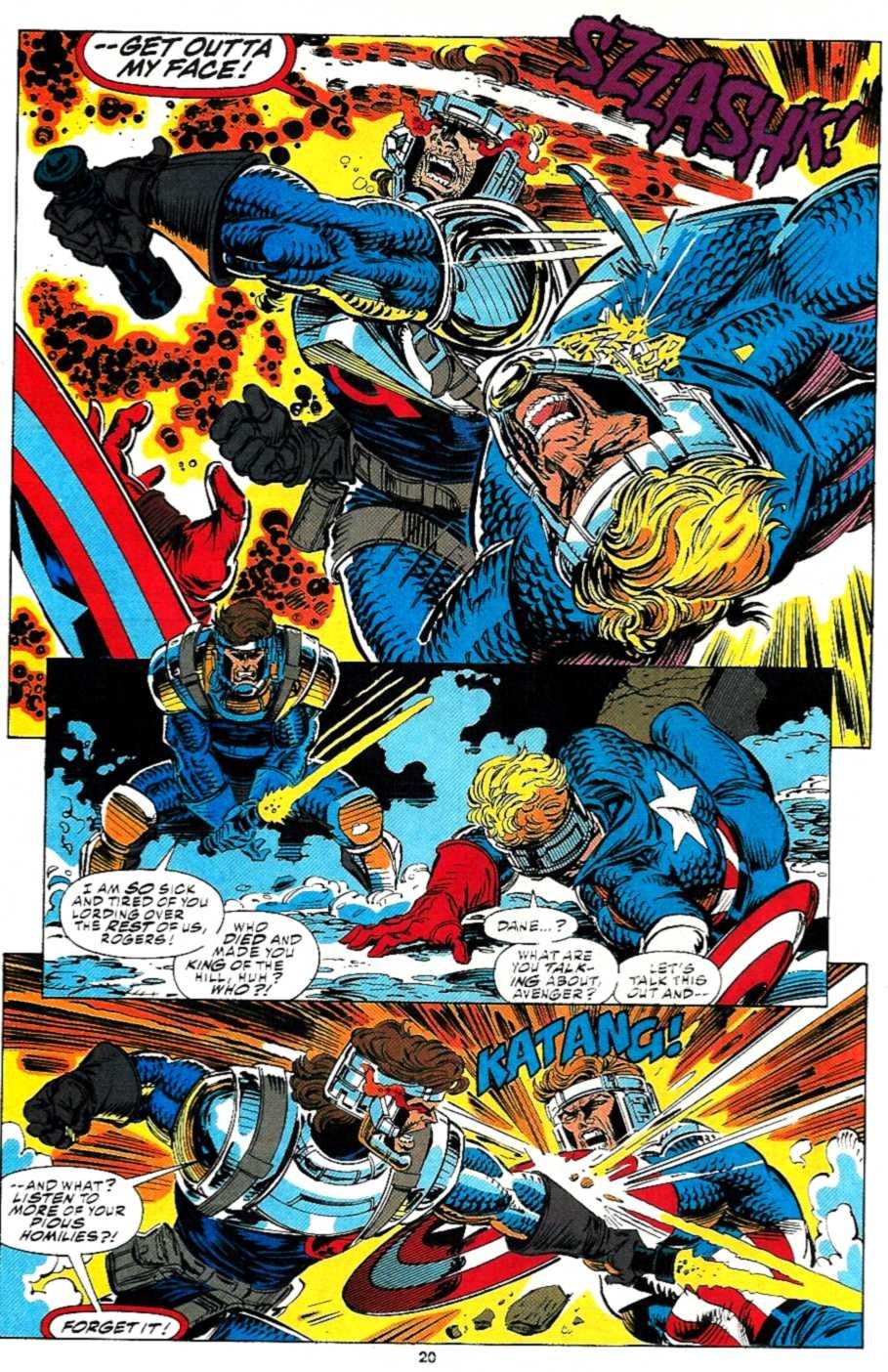 When Black Knight later fought against Steve Rogers during the Knight’s short-lived ongoing series that launched out of Secret Wars, it was when Steve was leading the Uncanny Avengers and was no longer using his shield (as he had given up being Captain America and let Sam Wilson take over after Steve lost his powers and youth due to a villain nullifying the effects of the Super Soldier Serum. However, the now really old Steve Rogers couldn’t help but continue to be a superhero, just using his Commander Rogers costume from when he returned during the Siege crossover when he decided to let the James “Bucky” Barnes continue as Captain America after Bucky had taken over as Cap when Steve was seemingly killed at the end of Civil War) and not using his shield.

RELATED: X-Men: How Did Storm Conquer Her Claustrophobia?

In general, while the Ebony Blade has certainly done its fair share of impressive cutting feats over the years (Black Panther used it to cut through Iron Man’s armor in one issue), its MOST impressive feats have tended towards magical feats, like how it cut through the Crimson Bands of Cyttorak in 1990’s Black Knight #3 (by Roy and Dann Thomas and Rich Buckler)… 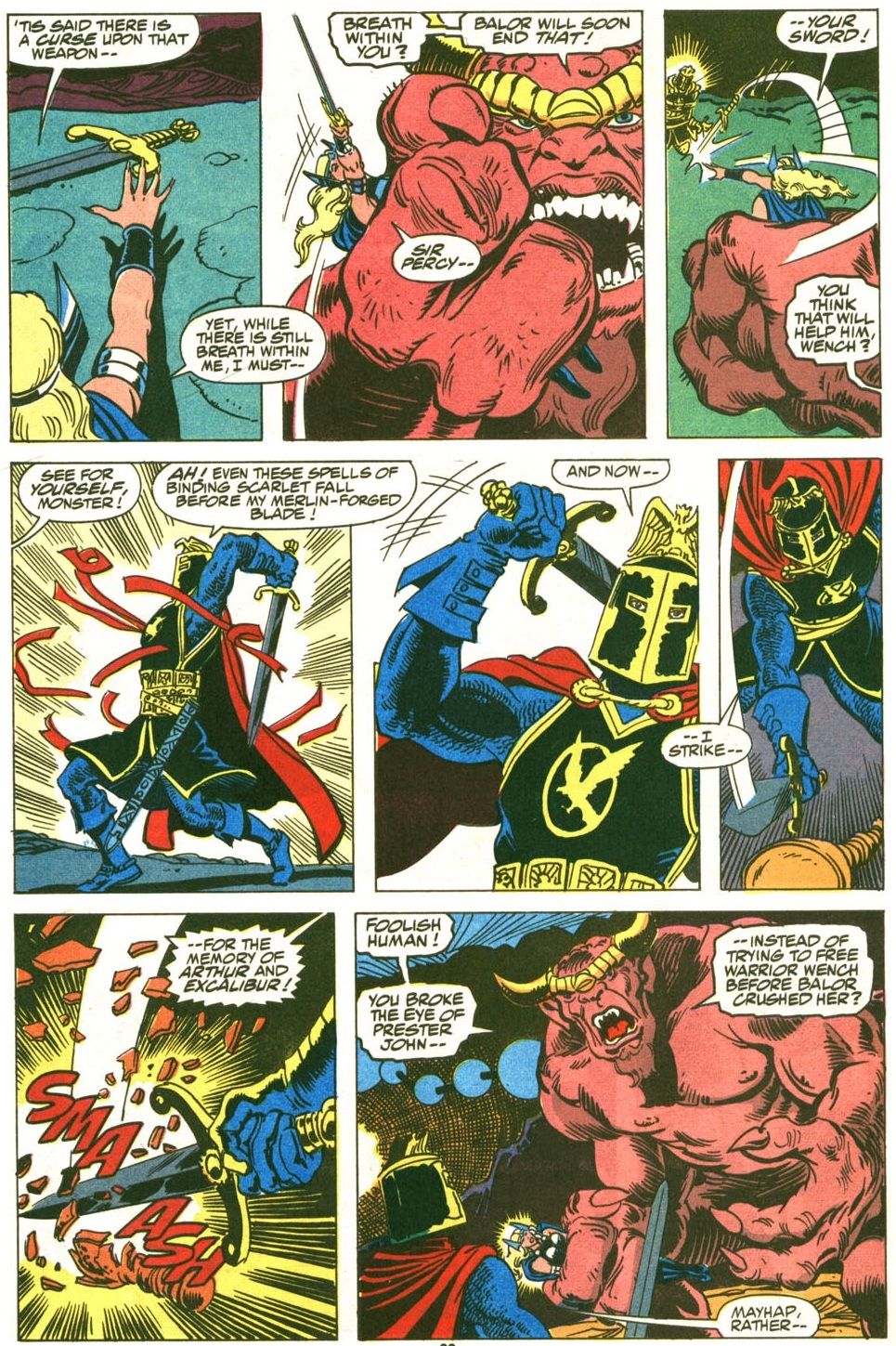 However, Hunter noted that in Skrull Kill Krew #3 (by Gerry Duggan and Juan Ferreyra), Foggy Nelson (who is covered in the blood of an Asgardian monster that Punisher has killed, as Foggy had been dragged to Asgard during the War of Realms event) pointed out that the Ebony Blade had cut through adamantium when Foggy helped prove that the Ebony Blade was the real one and not a copy… 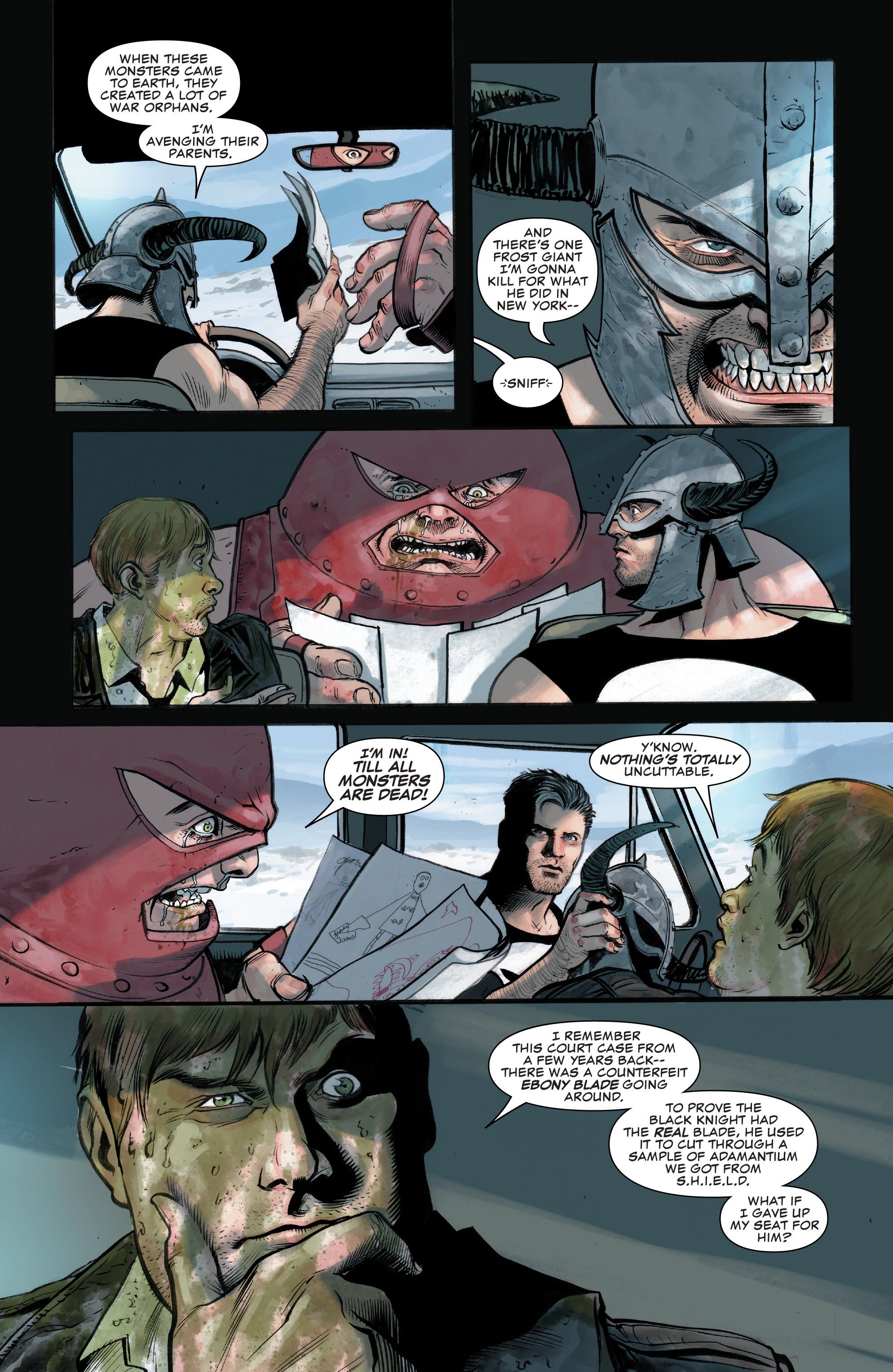 So that would certainly suggest that the Ebony Blade CAN cut through adamantium, right?

But a couple of thoughts on that. First off, it is a bad idea. There is no way that adamantium should be so plentiful that S.H.I.E.L.D. can just loan out pieces for a legal demonstration and the Black Knight should likely not be able to easily slice through something that Thor’s hammer could barely dent after using all of his might repeatedly. It just doesn’t make sense. Perhaps this is a good use of Kurt Busiek’s “Secondary Adamantium” retcon.

That would actually seem to be supported here, as in The X-Men vs. the Avengers #2 (by Roger Stern, Marc Silvestri and Joe Rubinstein), the Blade specifically could NOT cut through Wolverine’s adamantium claws… 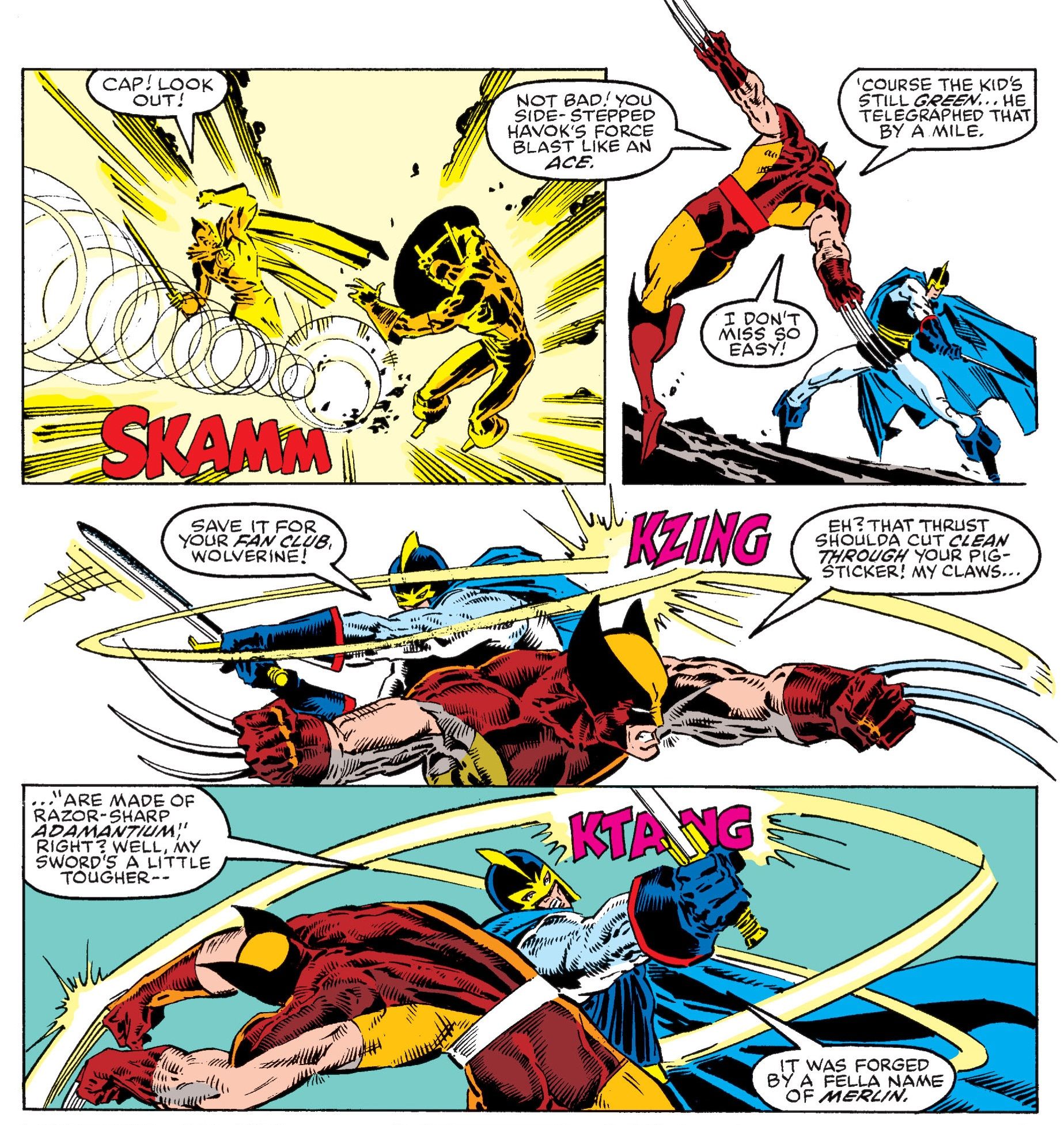 Thanks for the question, Hunter! If anyone else has a comic book question, drop me a line at brianc@cbr.com!