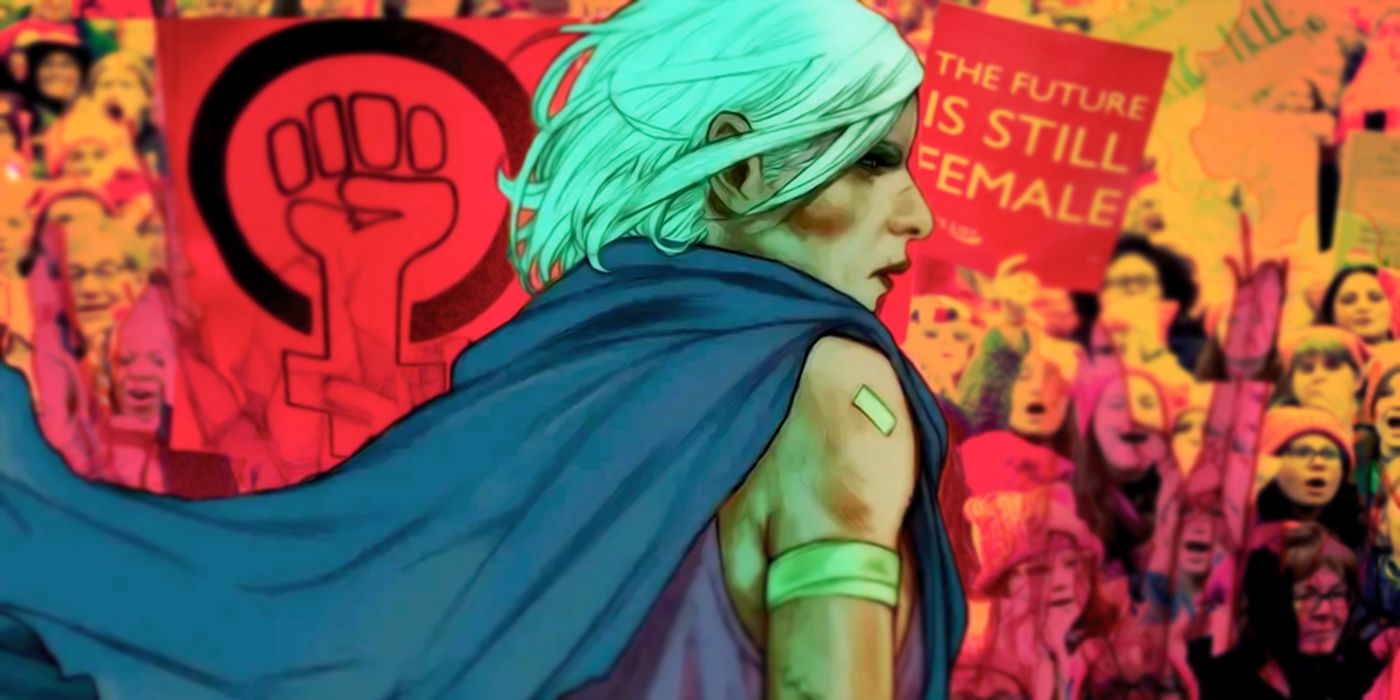 Buffy Summers has always battled against the darkest of supernatural forces, yet the latest entry in her ongoing story has introduced a Slayer literally incapable of fighting back against the vampire hordes. In this alternate future, mankind and the creatures of the night have reached a relative peace, making the Slayer all but entirely obsolete. Not only that, but even with the most powerful enemy Buffy ever faced now ruling this dark new world, its true villainy is a rather more insidious institution.

The vision of the future witnessed in the pages of Buffy the Last Vampire Slayer #1, by Casey Gilly, Joe Jaro, Joana Lafuente, and Ed Dukeshire, is far from anything that fans of the series have ever seen before, even if it isn’t all that different from our own on the surface. It has been decades since vampires and humans reached a tenuous, if not mutually beneficial treaty, one ensuring that no human is harmed by vampires while the creatures of the night are in turn no longer hunted by Slayers. Of course, nothing is ever really all that simple, especially not when it comes to the monsters of the Buffyverse. 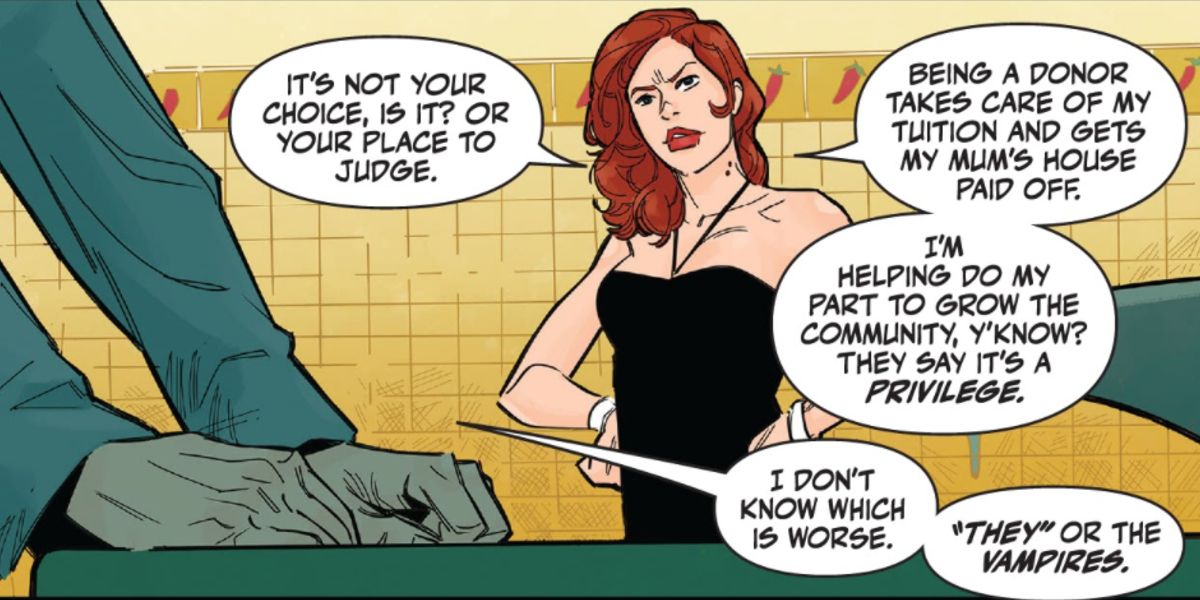 Now that vampires are no longer free to stalk their warmblooded prey, they must rely on willing “donors” to sate their undying bloodlust, and it’s a role that many have taken on despite of the obvious power imbalance that comes with it. When Buffy visits a vampire nightclub, many of the human patrons are enthralled by the idea that donating some number of times might open the door for them to be turned by the beasts they feed, and that’s not the only allure there is to the job.

It isn’t long before Buffy has a more personal encounter with a blood donor, and when she remarks on why the woman should care about her acquaintance’s aesthetic preferences, she is met with some all too familiar sounding rhetoric, in a way defending the monsters’ privilege, as seen in the image above. What this and other instances of the issue succeed in doing is opening up an interesting conversation about the in-built systems that govern us. In this case, the way in which the vampire populace has convinced humanity that they should be grateful for the opportunity to be fed upon isn’t dissimilar to the ideas of both capitalism and patriarchy in the real world.

As such, Buffy the Last Slayer offers clear commentary on the hidden power dynamics that not-so-secretly govern this place of supposed peace, especially given most of its enemies are pale, male monsters. The vampires of this world enjoy institutional protection in threatening and coercing unwitting humans, and are defended by them (again, as seen above), up to and including those who are clearly not of consenting age. This, we see near the issue’s end, when a vampire asserts himself on a would-be victim, who vocally denies her consent. Being in the wrong place at the wrong time alone seems enough for some vampires to assume a human is offering themselves up, in spite of any protest that person may have. 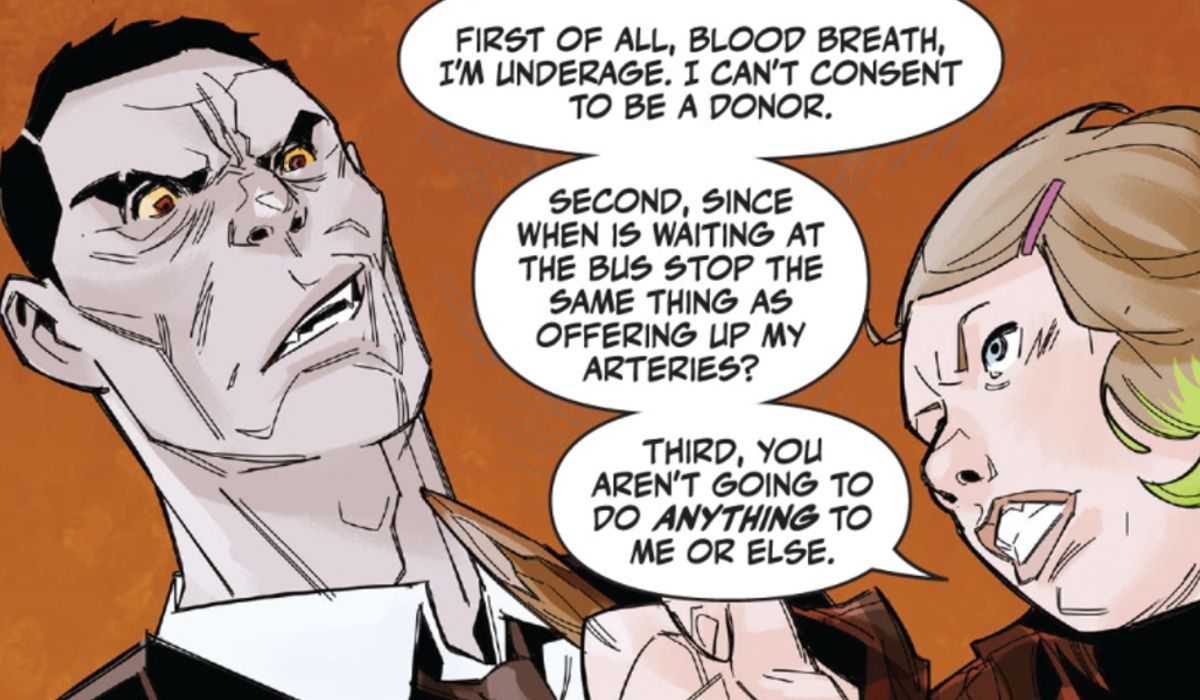 The idea that vampires have established their own sort of patriarchal state might sound like something of a flat reading to some at first, but Buffy has long dealt with that very same theme across every iteration of her story. Even when Buffy Summers wasn’t at the center of things, the Slayer mythos is steeped in the idea of women battling against the powerful forces that threaten to rule and feed on them; kicking against the pricks, so to speak.

But while this theme is pervasive in the Buffyverse, this particular tale is shaping up to be one that sees Buffy fighting a losing battle — a reading which could itself be commentary on the ceaseless tide of seemingly unbeatable institutionalized systems. She can wage war on all the vampires she wants, but Buffy can’t singlehandedly dismantle the new way of life for the entire planet, at least not alone. Her ability to work with others has always been a distinction of her time as a Slayer, but it’s become especially important as she begins to build her forces anew, perhaps in an attempt to overthrow the institutions that quietly oppress humanity, rather than just surviving them. Whether she will be able to convince everyone else to help her smash those systems, and convince them to look past the relative safety of their convenience, may ultimately be her biggest challenge.

KEEP READING: Why Katie Holmes Rejected the Role of Buffy the Vampire Slayer