YOU FOOLS!  Little did you know, Christmas had already started!  Except for Pan Miluś.  Somehow, improbably, he knew.  Why can’t the rest of you people we maniacs like him?  Boy, I don’t know.  So yup.  Having covered the DTV movie known only as Mickey’s Once Upon a Christmas or possibly just Once Upon a Christmas or possibly, if you want to get fancy, Disney’s Mickey’s Once Upon a Christmas.  But why would you?  And now, we are covering the comic-book adaptation of that movie’s sequel, where “once” is replaced with “twice.”  Actually, that comic book was my introduction to the franchise, if you want to call it that.  I guess I kind of vaguely figured, insofar as I did, that there had to be a “once” out there somewhere, but I never bothered to check it out, and I think I thought that “twice” might be a comics-only thing.  So I’ve exposed myself to some new media this holiday season, for better or worse.  You decide.  This includes five stories, so we’ll cover one every few days.  Also, I cannot absolutely guarantee that there won’t also be something or other at the cartoon site. 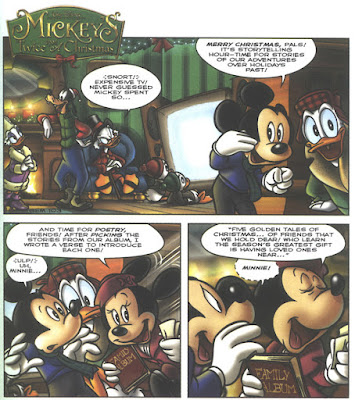 The first thing that will jump out at you here is wow does this ever look seventy billion times better than the movie.  Or if, like me, you read it before seeing the movie, your reaction to said movie will be, good god is this ever hot garbage.  Not that I love this art, but compared to the movie…well, you can’t compare it to the movie, as there is no comparison.  Very, very inexpressive, charmlessly plasticine character models.  If you want to give them a break in, because of, like, Christmas spirit or something, you might say, give them a break; they were still learning.  Remember the terrifying baby  in that early Pixar short?  They’ll get better.  Which, yeah, but in this particular case, “getting better” is going to mean completely jettisoning traditional animation, an artistic loss of incalculable proportions.  So screw ’em!  Actually, there is one–small–part of the movie that I kind of like: between shorts, we see the characters as two-dimensional cardboard cut-outs, which is a bit of all right.  Why can’t it all be like that?  I ask you.

I guess the second thing you’ll notice is this little framing sequence, which is not in the movie.  It’s fine!  I was surprised–though I really don’t know why; Disney has a long history of this–of the extent to which it departs from its source material–generally for the better.  The dialogue is also substantially altered to give it a somewhat more comic-y feel. 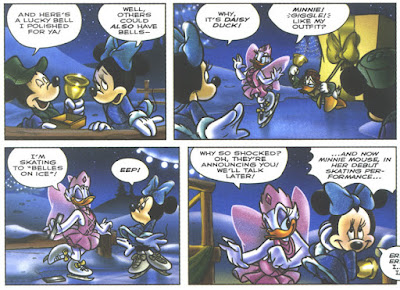 Well, to the story itself.  I say “story,” but it’s not much of anything in that regard.  However, I do kind of love the premise.  It’s not complicated, but the concept of Minnie and Daisy competing like this could be a showcase for some great animation…

…especially–and this is the main thing–when it brings in the hippos and crocodiles from the “Dance of the Hours” segment of Fantasia.  Did you know that that music originally comes from Ponchielli’s La Gioconda, a grim tragic opera?  True fact.  Man, I know it’s lame and myopic to be bitching about the good ol’ days, but damn, man, Fantasia.  Disney only wishes they could do something that impressive nowadays.  Fantasia 2000 doesn’t count, and even if it did, I doubt they could even manage that these days.  Feeble.  The idea of bringing these characters into Duck/Mouse continuity is silly yet delightful.  Though I guess, depending how you look at it, maybe they were already part of said continuity by way of “The Sorcerer’s Apprentice.”  Either way. 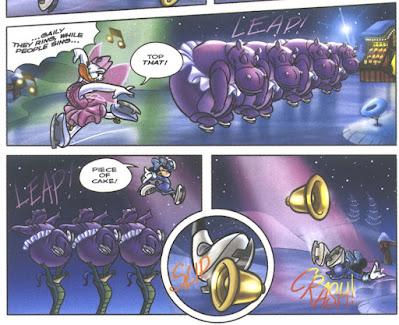 Of course, loving the premise is not the same as loving the result.  The problem is that the movie remains hideous, and the comic, lacking the kinetic properties of animation, never really rises above the level of “mildly pleasant.”  OH WELL. 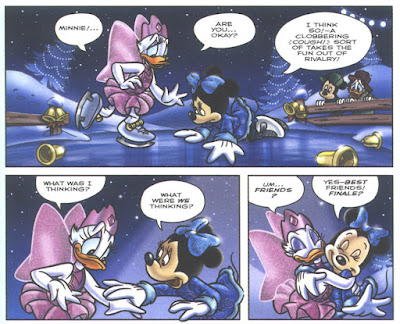 Blah blah, Christmas.  Has the idea that Minnie and Daisy have this special friendship really been evinced anywhere other than latter-day cartoons?  Anyway, enjoy.  If you want.

HOW CAN I PERSUADE YOU TO READ THIS POST?