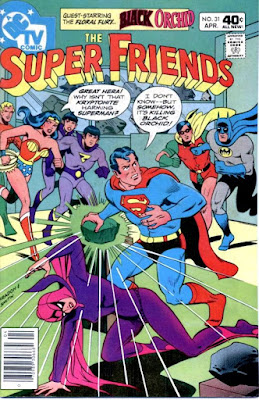 Welcome to another segment in my look at Black Orchid and the fan theory that she was Supergirl in disguise. While I haven’t  been able to discover the origins (or even the publication) of this theory, I have found it intriguing.

So far I looked at the original story where Orchid purportedly used X-rays to reprogram a computer. Next I looked at her Who’s Who page where the use of X-rays was swept away as hyperbole.
Today I look at Super Friends #31. While Super Friends has never been considered in continuity, writer E. Nelson Bridwell was a continuity wonk and often wove elements of DC history into his story. No big surprise, Bridwell beings in some Black Orchid continuity into this story and definitely touches on the rumor I am exploring. The cover screams it! Orchid is weakened by Kryptonite. But why is Superman unaffected?
Ramona Fradon brings her clean style to the proceedings. While her Orchid isn’t as exotic as the original stories or the Phantom Stranger backgrounds, there is a certain elegance.

As for the ultimate answer to the rumor, this issue might answer it … if you think Super Friends is in continuity.

On to the details! 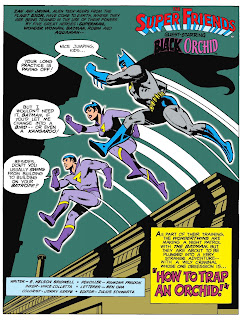 ‘How to trap an orchid!’ starts innocently enough with Batman out on a training mission with the Wonder Twins.
Jumping from rooftop to rooftop, Batman teaches the twins about being ready to act solo in case they aren’t near each other. He also teaches Zan to know his surroundings. You can’t swing down to another building if you are on the highest roof.
These are simple lessons but I like seeing Batman as a mentor. 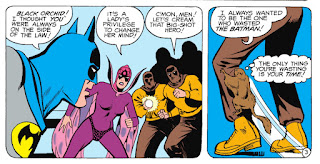 Of course, as luck would have it, they stumble onto a crime being committed … by Black Orchid!!!

She and her henchmen struggle against the Dark Knight and Jayna (in the form of a flying squirrel) and Zan in the form of smog. Smog?! 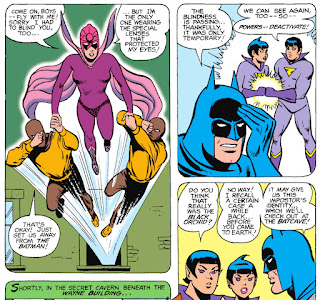 But Black Orchid is ready.
She throws a black orchid flower to the ground. But it is armed with a magnesium flare. In the bright light of the grenade, the Orchid grabs her men and flies off. It seems to be Black Orchid!
But Batman isn’t convinced. He remembers a certain case from the past. 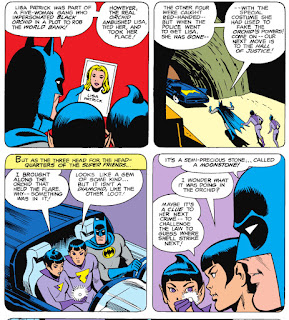 Sure enough, Batman brings up a story from Phantom Stranger #38 (perhaps next on my review list?).
In that story, members of a gang dress up like Black Orchid, using special suits, mimic the real Orchid’s powers to commit crimes. One of them was Lisa Patrick. So this larcenous Orchid must be her.
Moreover, Jayne may have found a clue. Within the magnesium flare was a chunk of moonstone. Perhaps the moonstone is a dare, a way to let the Super Friends know what Patrick/Orchid’s next crime is.
Ahhh, the good old days when criminals left clues for the authorities, teasing their next big crime. Back at the Hall of Justice, Batman and Superman know that how they interpreted the Moonstone clue is exactly how Black Orchid will. There is going to be a showdown.
But this is a nice deep cut by Bridwell, digging deep in to DC history. 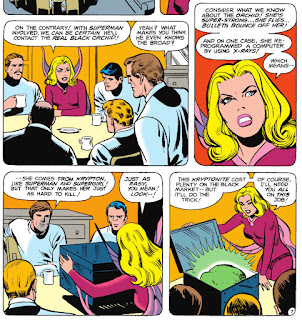 This Orchid is Lisa Patrick. And she is out for revenge.
She has put together the mystery. Black Orchid has super-strength, invulnerability, flight, and even used X-rays to reprogram a computer (that pesky story again!). Therefore, Black Orchid must be Kryptonian. (Although she doesn’t say it is Supergirl, it is on the same track.)
So if you want to get revenge on a Kryptonian, you better have Kryptonite.
And check out the size of the Kryptonite rock Patrick bought.
You think whoever had such a rock would break it down for more sales. You could definitely retire on the money you’d get. 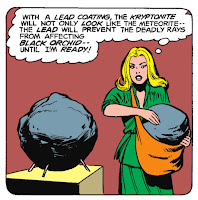 At a nearby museum with an interstellar rock display (like moonstones!), Patrick sets her trap. She paints her Kryptonite rock with lead. She then switches it for a real moonstone.
The weapon is planted.
Again, this seems like a long way to go for revenge. Plus, Patrick has to be counting on Black Orchid getting word of all this and seeking it her imposter. It is crazy plot all the way around. 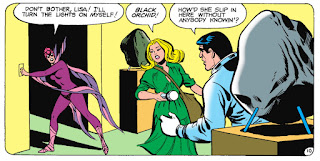 My guess is that Patrick isn’t going to make much money from moonstone heist. My guess is this whole thing is a fake-out to lure Black Orchid into the fray.

With the museum closed, Patrick’s flunkies (who have been hiding in plain sight in astronaut suits in the museum) join her in looting the place.
But the whole thing works. Black Orchid does show up! 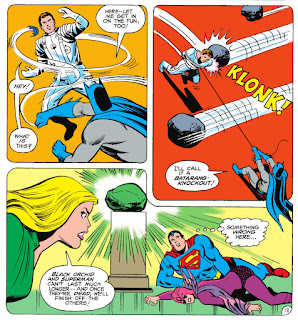 Unfortunately for Patrick, the Super Friends also figured out the clues and show up. While the other heroes take out the henchmen, Superman joins Orchid in confronting Patrick.

Patrick shoots the Kryptonite rock with a chemical dissolving the lead.

Both Orchid and Superman seem to collapse in pain.
But something is odd. Superman isn’t effected at all. I don’t know why he goes to the ground but he does. Even crazier, he can tell using his sense that the green rock is actually Kryptonite. He should be in agony but he isn’t.

And if he isn’t suffering, why is Black Orchid?
It is all baffling!
But seeing Black Orchid weakened by Green K! It is the reader theory come to life. How great of Bridwell to play this out the way he is!

As Patrick goes in to gloat, we get another surprise!
Black Orchid has been faking.
It is a little bit too much hair tugging here but there goes the ‘Black Orchid is Kryptonian’ theory. Or is it done? After all, why is Superman not in peril? 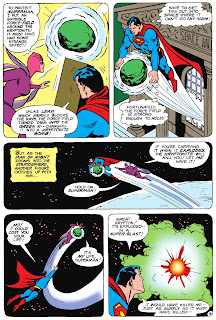 Well remember how in the Who’s Who entry it says Black Orchid can project force fields? (It is a detail I omitted covering because it doesn’t fit the Kryptonian narrative.)
Orchid put a force field around the Kryptonite and that field blocked the Kryptonite radiation from escaping and hurting Superman.
There is a downside. The field has somehow made the Green K into a bomb.
Superman grabs it to fly it into space but it is Orchid who takes it the rest of the way, keeping Superman safe from the Green K explosion. Did this remind anyone else of Ferro Lad grabbing the Sun Eater bomb?
I do like the incredulous Superman looking at the explosion and knowing he wouldn’t have survived. 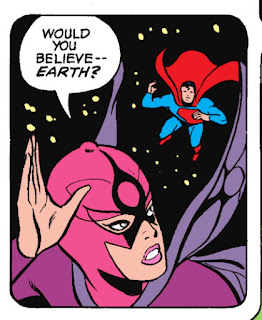 But out of the blast flies an unharmed Black Orchid.

Superman asks her straight out what planet she is from. She answers ‘would you believe — Earth?’

Do we take her at her word? Or is this more wordplay.
I think she means it.
Back at the museum, the Super Friends find a mask showing that Orchid had disguised herself as the Museum Tour Guide. She remains a mystery even to them.
Okay, so this is a pretty bonkers story from the criminal’s scheme to the convenient K-bomb. But clearly Bridwell was leaning into the reader  theory that Orchid was Supergirl (or a Kryptonian) so unabashedly love this story. And ENB even builds off of Orchid’s brief history to create the story. That’s great.
I suppose the outright force field power and the ‘I’m from Earth’ proclamation puts the rumor to rest … assuming you believe Super Friends is in continuity.
What do you all think?
Overall grade: B+