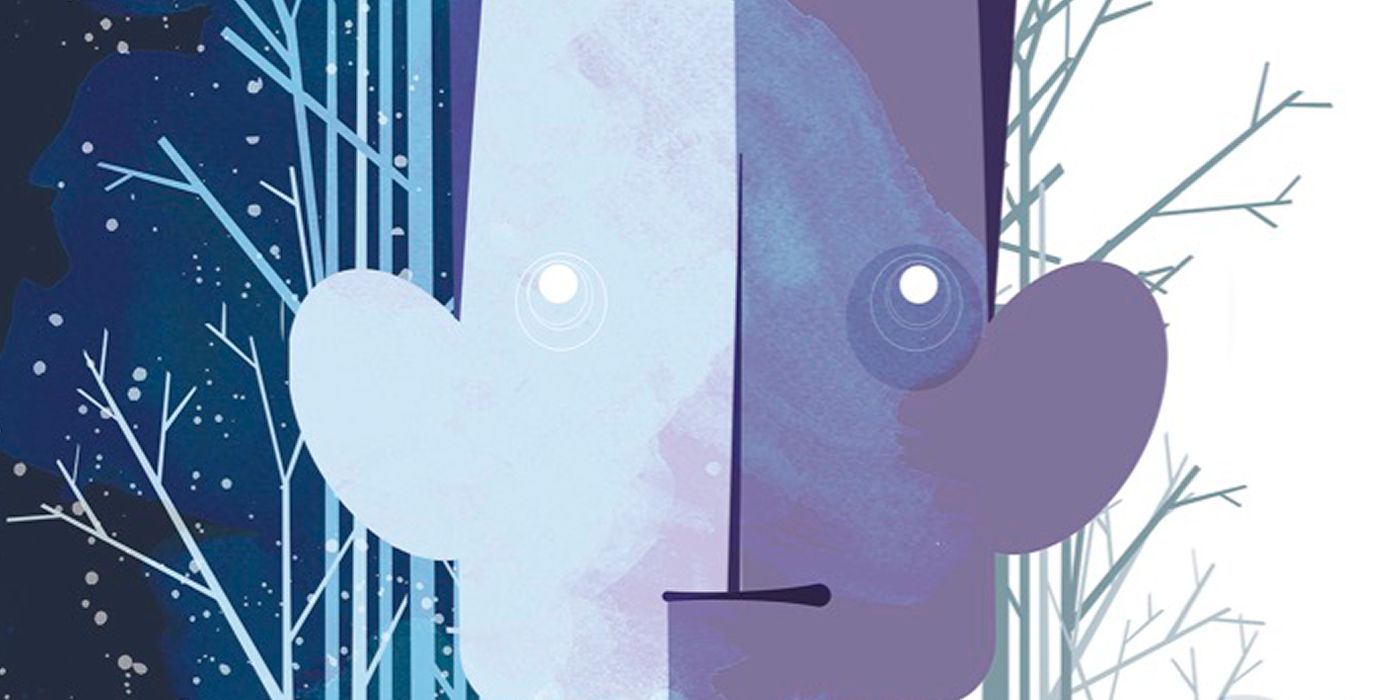 Until recently, Norm Konyu was best known as an animator. He has worked for everyone from the BBC to Cartoon Network. But now, Konyu is taking his talents to the comic world. His debut graphic novel, The Junction, will be released on April 12 from Titan Comics. The Junction tells the story of a young boy named Lucas who appears in his hometown 12 years after he and his father disappeared under mysterious circumstances. Despite how much time has passed, Lucas doesn’t appear to have aged at all. A detective joins forces with a psychologist to unravel the mystery of Lucas’s life, but he refuses to communicate with them, so they have to resort to reading his diary.

CBR recently spoke with Konyu about creating The Junction. He discussed the challenge of discovering his own visual style after years of working in animation, as well as some of his inspirations for the graphic novel. He also explored his nostalgia for the ’80s and the ways that that feeling influenced his work. 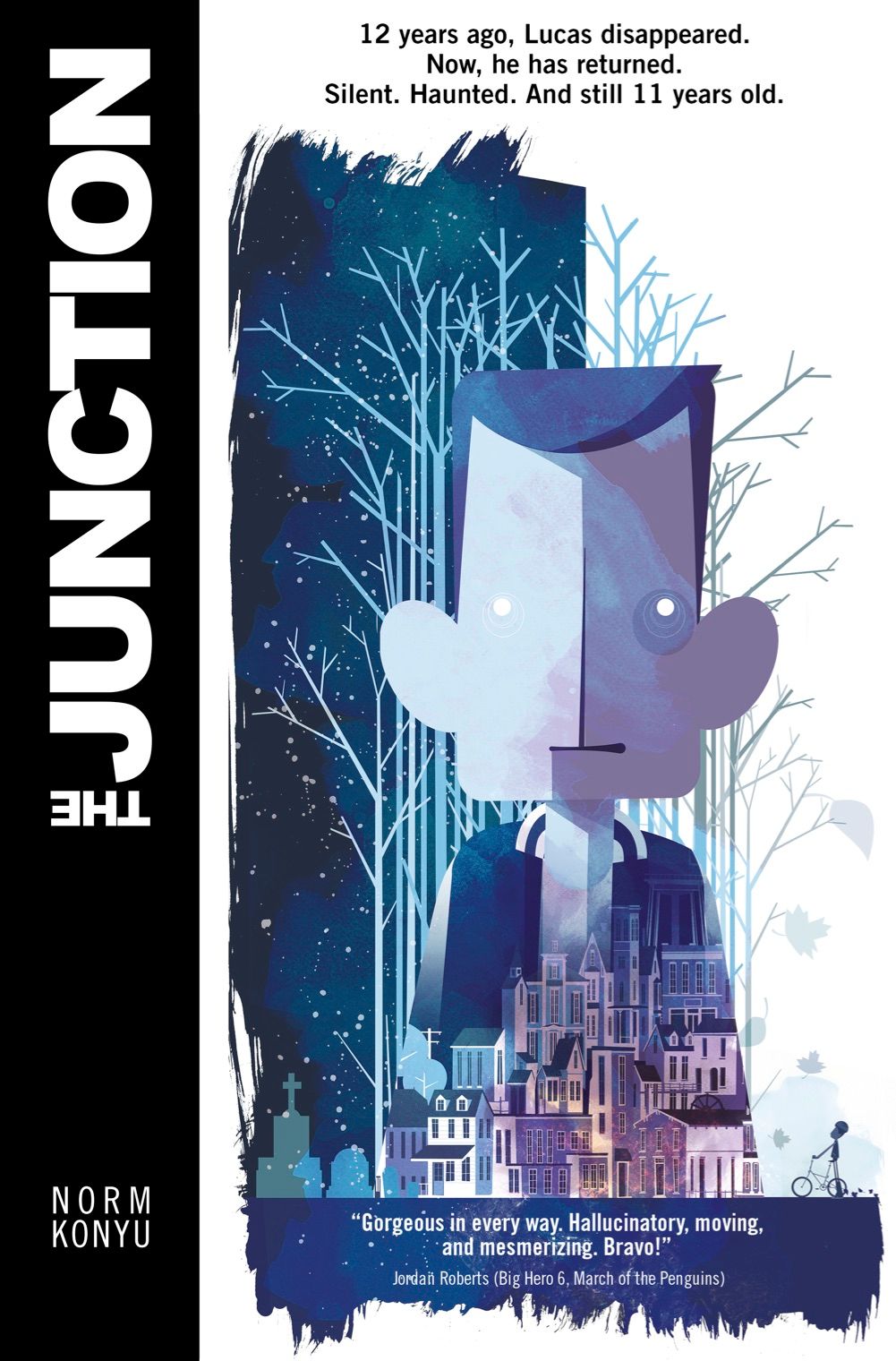 CBR: Could you talk about how you started working on The Junction?

Konyu: It’s been a very long journey. I’m an animator. And I’ve spent my whole career basically doing other people’s designs. I did a lot of work for Cartoon Network and Nickelodeon. So every time they needed some publicity animation of Spongebob or something,  I was one of the people they’d bring in. So I spent years, you know, it’s great working on this stuff, but it’s always someone else’s design. So some years ago, I just came to the realization, that I had no idea what my own material looked like. So this started off as an exploration of what my own style was like. I had a rough idea in my head of my story, which I had first written down in 2012. But I didn’t start working seriously on it as a book for a good five years. After that, I spent a lot of time exploring my visual style. And for probably the first half of the book, I had no idea whether I’d ever finish it because it was just sort of a project for myself, to begin with.

Did you initially imagine it as the graphic novel it is today or were you planning on serializing it?

I had imagined it as a one-off graphic novel. I just had not thought it was going to run to 176 pages. In my head I thought, “I could do that in 100 pages Easy!” And then when I actually got around to thumbnailing, and plotting it out, the pages just kept going. And stuff did get left behind when I realized how long it was getting. So there was an editing process bringing it down to that number of pages, but it ended up being a much larger undertaking than I ever imagined.

Was it difficult to adjust to the comic medium after spending your career working in animation?

I quite enjoyed it, to be honest. I mean,  I approached it as if it was a film.  Anyway, this is the way to tell a story on film. And it’s not much different than in a comic book. There are some of the same basic rules. But I did enjoy the fact that I didn’t have to work in 16 by 9 all the time. So when something needed to be tall, it could be tall and thin as a frame. I really did enjoy that. That little bit of newfound freedom, though, I sometimes didn’t enjoy the puzzle of getting all those on one page. 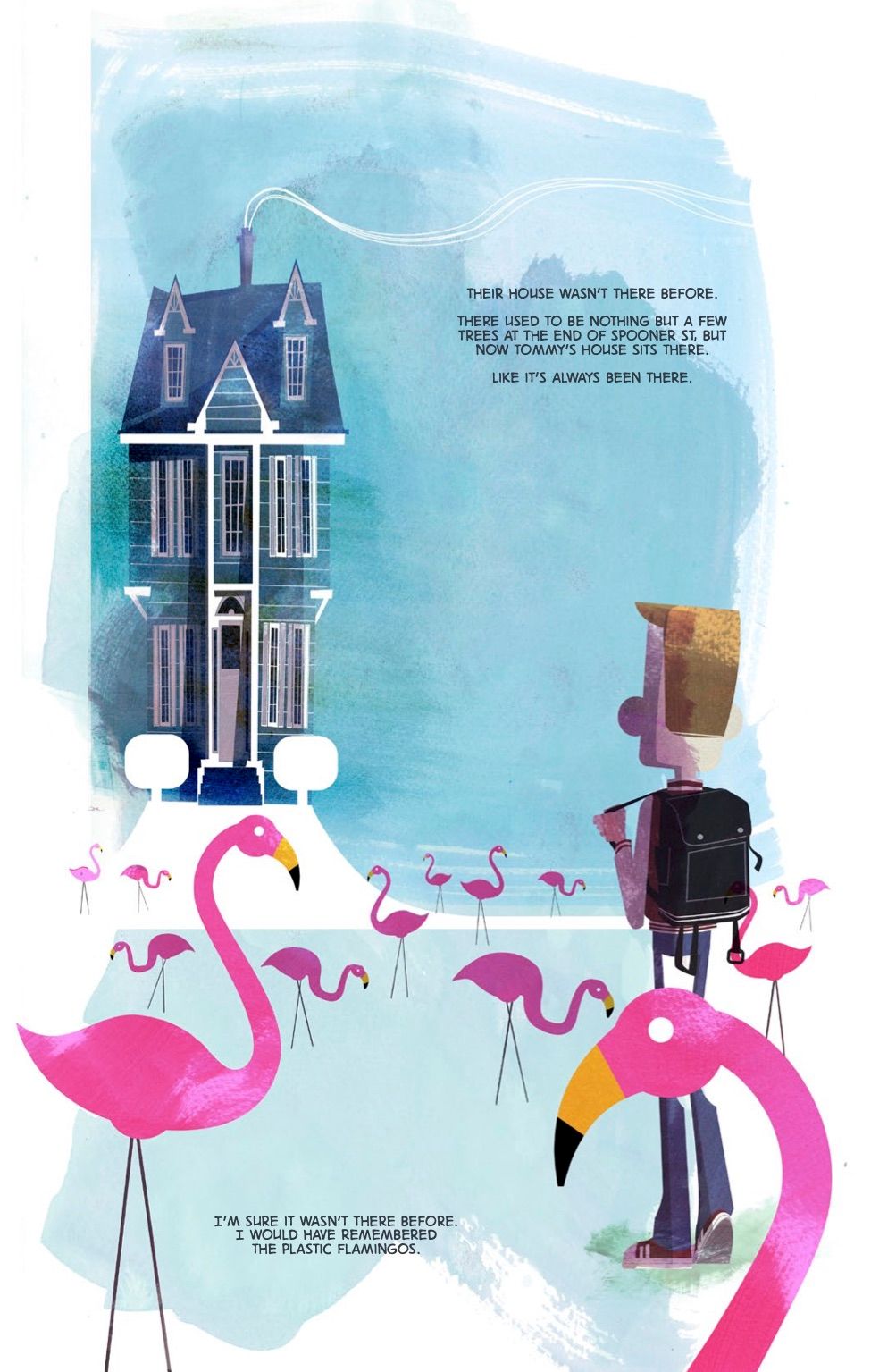 In the back-matter of The Junction, you mention that you drew each panel individually instead of working page by page. What was that like?

I have learned my lesson on that one as well. I mean, there was a lot of learning. And the one big thing I’ll say to all you kids out there is, you can’t over plan at the start with your thumbnails. I was too eager to jump in and get going on the artwork and I suffered for that because I hadn’t planned it enough upfront. So a lot of stuff ended up in the digital wastebasket, so to speak. Because I had not done enough forward planning to start with. But yes, I approached each frame as a separate piece of art even though I’d mapped it out on a page. That just ended up adding to the amount of work I had to do putting it all together in the end. I’m working on a second book now and everything on one page is one piece of artwork now.

It makes it more of a mystery for the people, the police and the child psychologist assigned to his case to try to understand what has happened to him. If he’s not speaking, they have to go to the diary. If someone’s narrating you end up with a lot of narration boxes, but with a diary, we dissolve into the actual events that are described in the diary. And that was sort of the tool I think I was using.

Related: Stan Lee Wasn’t the First Marvel Creator to Get a Cameo — Jack Kirby Was 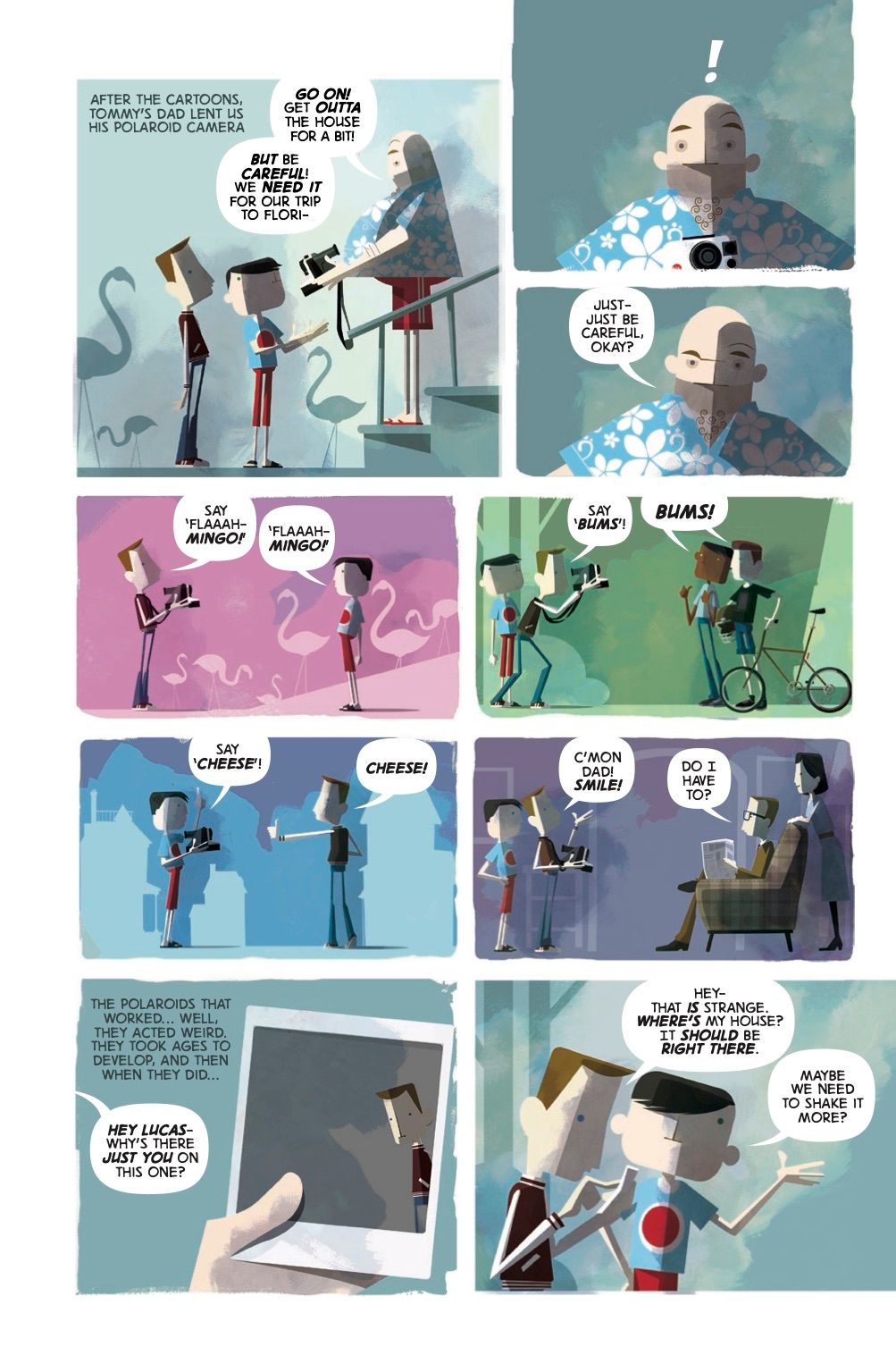 You draw The Junction in a very graphic style that leaves a lot to the imagination while being really distinct. How did it take you to develop that style, and how important is that aesthetic to the story?

It did take a while because the artwork encompasses two things that I like, which are really polar opposites. I like the nice sharp vector edges that you get out of a program like Illustrator, which is something I would use in animation anyway to create a character. So something I’m very familiar with. But it can leave things looking a bit flat and sometimes a bit uninteresting. So I have an equal love for textures, especially painted textures. So I spent a lot of time making up a lot of swatches of real-life paint, which then I could take that vector artwork into Photoshop and bring that texture in and make it more interesting. And it gives it a bit more of an ethereal look. A bit more mysterious. It gives it a bit of character, which is sometimes lacking in flat Vector Artwork. But it does add to the time because obviously, I’m first drawing it entirely in the vector way, and then almost going over it and trying to get rid of some of those vectors by adding texture.

Lucas’s favorite book is Jules Verne’s 20,000 Leagues Under the Sea. What about this particular book appeals to you? Were there other books that you considered?

The book is all based in the ’80s, which is the kind of the oldest time period I can clearly remember. So part of this book is looking back a bit nostalgically to those times. So among the things is, in our household for many years, we didn’t have a television. So I, I read. I read voraciously. And I remember reading all that Jules Verne stuff as a kid, I loved the Jules Verne stuff. I did consider Hound of the Baskervilles as well, because I remember that one, clearly, from my childhood. But Jules Verne had more of that mystery that sat side by side with the mystery of The Junction. 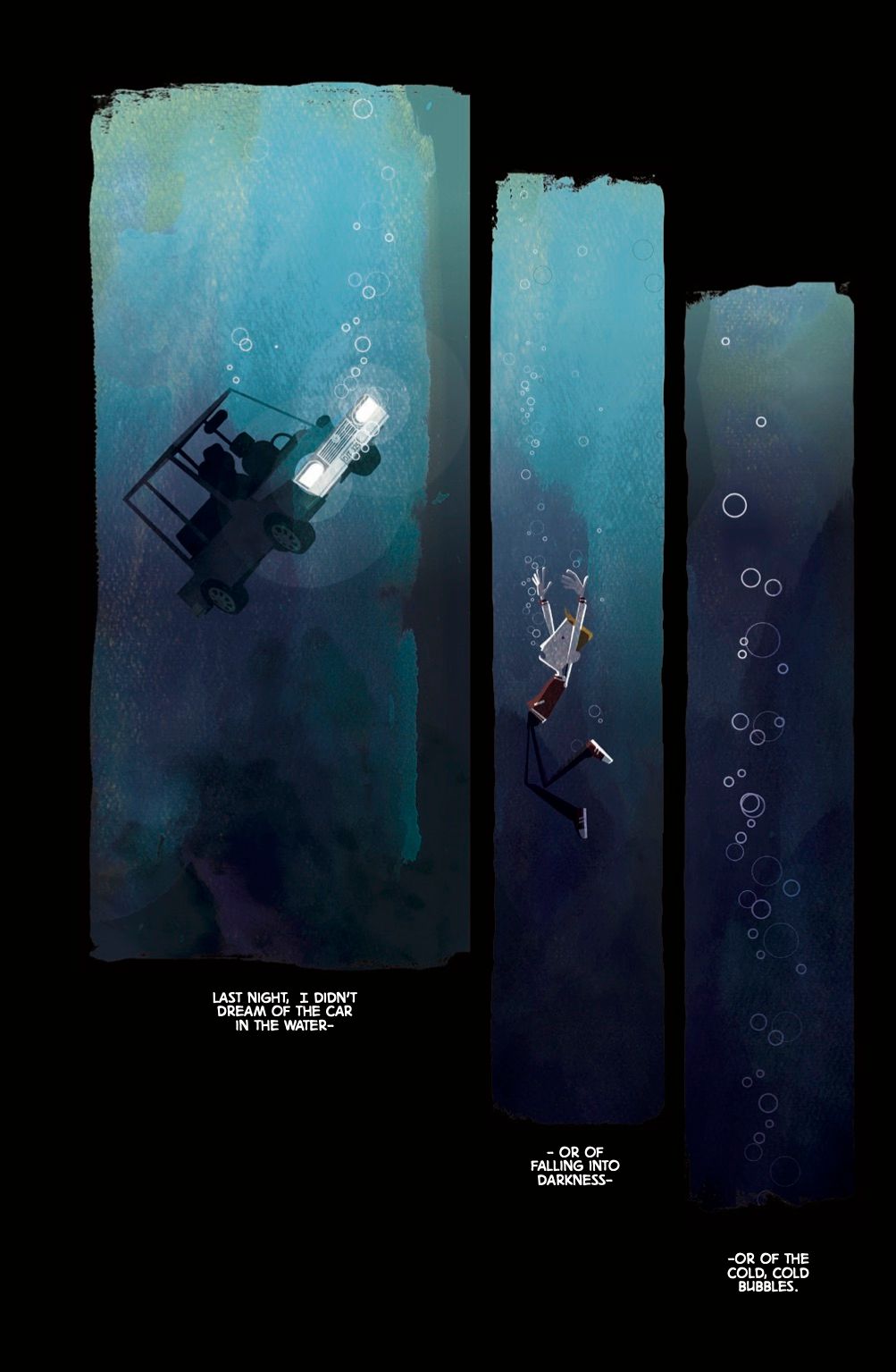 Is that personal connection why you decided to set the book in the ’80s?

Yes. Partially because I can remember that sense of nostalgia. But also, I think stories are set in  our days now are a bit more difficult to keep mysterious because of mobile phones. If you watch any movie now with any mystery or horror they have to set up that the mobile phones aren’t working, they haven’t got a signal or whatever, to preserve the mystery. And it has to be done because so many ways of getting out of a situation or finding out about something now comes down to our phones. And there’s a nostalgia to looking back to those simpler times. I quite enjoyed it as a professional the time when a client couldn’t ring you up at all hours of the day.

Were there any other mystery comics or novels or films that you look to for inspiration while you were working on The Junction?

Once I got past the writing stage, I put a moratorium on myself looking at any other comics because I wanted to make sure I wasn’t influenced by anything else. I really wanted to keep it clear of other outside influences, so that it was truly personal. But as a kid, I read a lot of comics. I wasn’t into the superhero stuff so much though, I would read them if they were around.  Beggars can’t be choosers. I was into the Conan stuff and The Spirit and things like that.  I loved anything by Jack Kirby — the weirder the better, like his Kamandi and The Eternals. His original run of The Eternals was my favorite comic as a kid. In fact, I love Kirby so much that his name turns up in the book as the name of the town Kirby Junction. But if people look really closely, there’s another reason for it being called Kirby Junction hidden away in the pages. 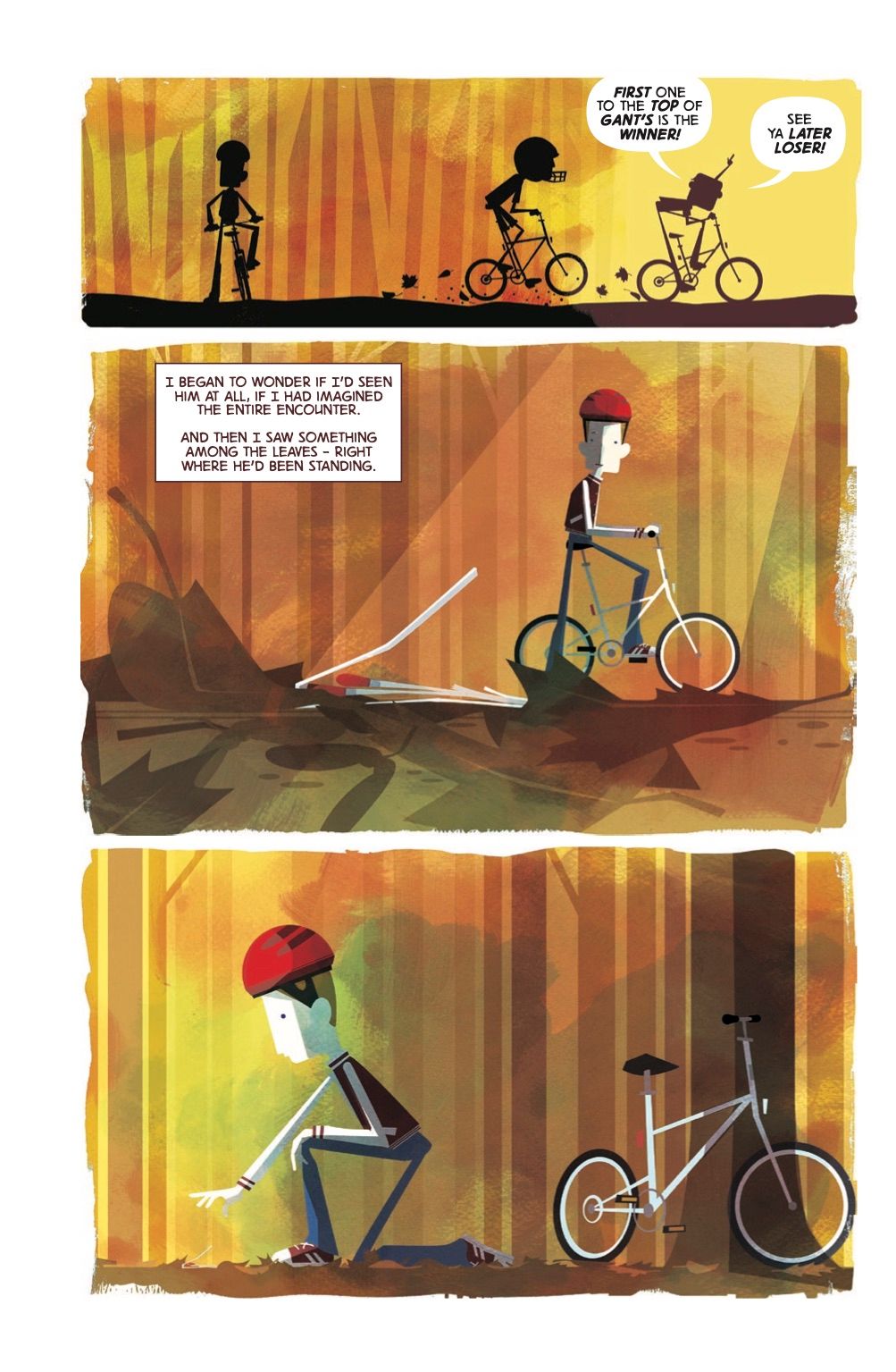 You weave a lot of subtle clues into the story without spelling things out for your audience. How important was it to you to maintain a sense of mystery even at the very end?

I like a mystery that does have an ending which I believe The Junction does, though t’s not crystal clear. I don’t like to be led by the hand. I like to have to put some brainpower into this. So that was quite important to me. But what I have found quite interesting now that more reviews are coming in since I did the Kickstarter, some people thought it was a bit too ambiguous and other people thought it was too to the point.

What are you most excited for fans to engage with in The Junction?

What I have enjoyed are the different takeaways people have from it. Some people look at it as a mystery, some are looking at more from the supernatural side. Some people take away the nostalgia of you know, the youth. One person said to me, “I remember the ’80s just constantly me and my two buddies riding around on bicycles in town.” It’s a book about loss. And a lot of people connected it with a personal loss they’ve had and how they’ve dealt with it. So that was something  I hadn’t seen coming.

The Junction is due out on April 12 from Titan Comics.

One of the Worst Movies Ever is Trending on Netflix

Moon Knight Has Finally Evolved to Care about Victims, Not Villains

https://ift.tt/6crjeEO The newest Predator movie, Prey, was released on Hulu this weekend, and fans of the franchise cannot stop praising