Andrew Neal’s evolution as a cartoonist in his Meeting Comics strip has been fascinating to watch. He transformed it from an inchoate series of gag panels to an absurd but fully fleshed-out narrative chock full of complex, layered characters. Of these, Val Cannon became his breakout star, thanks to her give-no-fucks attitude and full possession of her sexuality. One of the fun things in Meeting Comics is when Neal randomly reveals a new fact about one of his characters. With Val, it’s that she was the lead singer of a punk band called Titty Blud. 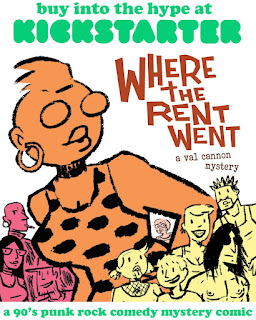 Neal went down a rabbit hole with Meeting Comics #21: it’s a one-and-done story titled “Where The Rent Went,” featuring Val in 1996. Couch-surfing in precisely the kind of post-college house familiar to the sort of person still figuring things out after graduation, the story was set in a house party where Val performed. When one of the housemates reported that the envelope containing the rent was missing, the story suddenly turned into a combination of a detective story and a romance/sex saga. 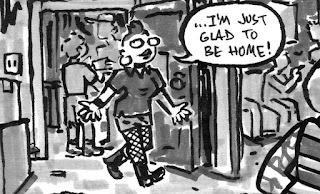 It’s compelling as both. Interviewing the housemates led to a wide array of people with varying motives, which she eliminated one-by-one. Neal is thorough in not cheating with regard to providing clues but doesn’t telegraph it, either. It also serves as a kind of origin story for Val as a sexual being, where she becomes aware of how much everyone in her house is into her. Cleverly, Neal solves the story’s mystery but leaves the issue on a cliffhanger. 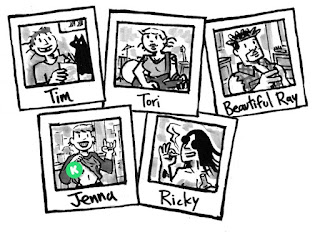 One of the reasons why Val is so compelling is her character design. Her glasses obscure her eyes, making her seem more opaque and mysterious. Even with a mohawk and a tight leopard-print dress, she retained that air of mystery that was a big part of her attractiveness. Every character in this issue feels very much like an archetype, like long-haired Ricky with six-pack abs or a concert nuisance dubbed Dick-Out Daryl. Neal uses a pretty thick line and a lot of greyscale shading that gives his comics a sludgy feel that fits the overall mood of his work. His character design is highly stylized and wouldn’t really work with a lot of cross-hatching.

VALue Added is a bonus mini that discusses Neal’s process. He goes into detail regarding Val’s background and how he slowly added to it, changes he made to the script as he expanded the story, and photos back from his days living in a Chapel Hill house not unlike this. Neal also captures a certain feeling of being that age, when rather than feeling the possibilities of youth, one instead feels like life is already passing you by. That it’s nearly too late to do something interesting with one’s life. It’s a suffocating feeling, but Val is the one character who always smoothly navigates it, no matter what.

ESPYS: The 2022 WWE Moment of the Year Final Four Nominations Have Been Decided

Did Another Marvel Character Get Confirmed for Guardians of the Galaxy Holiday Special?