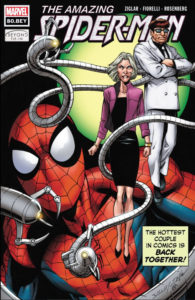 Aunt May and Doc Ock heat it up in the romantic action drama that we’ve all been waiting for!  The scenes are steamy and the stakes are high.  Doc Ock shows he is more than up for the task and Aunt May is willing do anything for love.  Join Dark Mark as he dives deep into the best Aunt May team-up issue since Golden Oldie!  Be ready, Crawlspacers, you have an assignment!

Peter is in a coma due to a fight with the UFoes and Ben is playing Spider-Man as an employee of the Beyond Corporation.  Aunt May has recruited Doc Ock to help her nephew since the doctors are out of their league with the type of radiation he has succumbed to.

Aunt May and Doc Ock join together in a little bit of crime solving and a whole lot of flirting – a WHOLE LOT OF FLIRTING (we’re talking Bond and Jinx level flirting here) – and from the ESU campus, they track down where the UFoes hid out and from there they discover where they are currently being held.  Doc also finds out that the Beyond Corporation has something to do with all of this and goes a little nuts, which ruins his chances with May, who promptly ends their arrangement.  However, even though he will have nothing to gain from this, he goes behind her back and provides the necessary cure to the doctors after all.  Peter wakes up and all is good.

There are over a million words in the English language, and none of them are sufficient to express how much I am glad that the Marvel MAX imprint is no longer in operation after this little exchange… 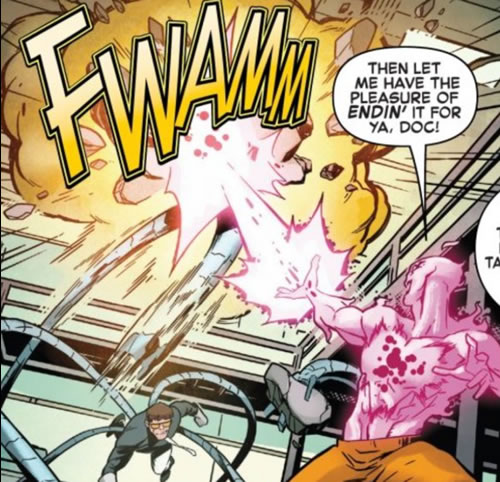 On a scale of 1 (POW) to 10 (BLRKBQRKPQRBLNB), FWAMM rates a decent 6.5.  It is the exact sound my dentist’s X-Ray machine makes when it works, so I assume that it is perfect for X-Ray here.

The Ock Bling – How probable is it that we will see this again?  Did anyone else think it was going to be some secret Ock-bot or surveillance device?

The Dynamics of May and Ock – this was well done.  Maybe a little too over the top with some of the remarks, but I took in great fun as I believe this issue was meant to be.  With May doing her nice routine while Ock was trying to be nice, but just couldn’t stop himself from being Ock, they played off each other very well.

Doc Ock – Maybe I am supposed to know this, but what do you guys think Beyond has on Doc Ock?  He is VERY upset that they are involved in any of this, which is odd since I thought they were pretty much a company known to the public. Here, it sounds like they are operating in secrecy.  Also, when this started, I thought for sure that when he worked on Peter, he would take a blood sample and then figure out that the radiation in his blood was from being Spider-Man.  Then, who knows?  Does he try to take away Peter’s powers?  Does he try on Peter, but end up taking out Ben’s?  But alas, it was not meant to be.

Language – I sure hope this becomes the new swear word on the Crawlspace.

First crazy town banana pants and now this!  What is it with fruit and the Parkers?

Speaking of command of the verbal realm – this exchange is pretty much like EVERY conversation I have with Chi-Town. 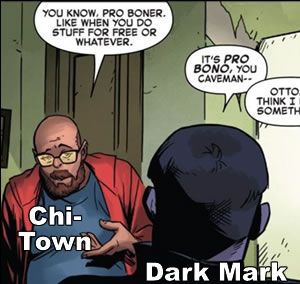 Detention goes to me.  I need to confess my greatest shame in comics.  Back in the ‘80s, Conway was writing Spider-Man and, I don’t remember what the story was, but it was so bad that it inspired me to write a rather mean-spirited letter to Conway about it.  I don’t remember the letter, but in it I said something to the degree of if he was going to write crap like that, here are a few suggestions for him.  How about bringing Willie Lumpkin from the FF and pairing him up with Aunt May or rekindling that Aunt May and Doc Ock affair or better yet, how about a love triangle between the two?  Well, I never heard anything back and later felt bad about my rather impudent response.  Imagine my surprise, when in 1991, Spectacular Spider-Man #173 came out and Conway, on his way out, USED THAT STUPID IDEA!  And I still don’t know if I am glad or not that my name was not associated with it. 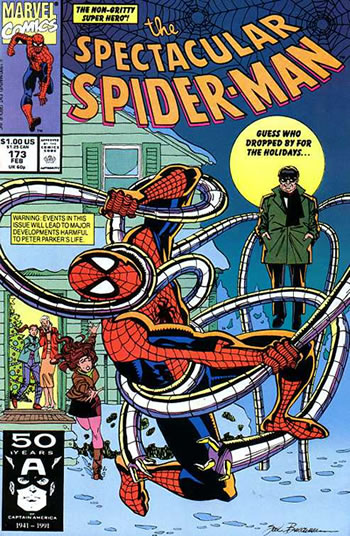 It was a fun comic and since it was a .BEY, I was not expecting much Peter Parker or Spider-Man to be in it.  I know some of you will automatically drop a few letter grades for no Spidey, but I felt it was warranted for this issue.  The exchange between May and Ock was funny, the story moved at a great pace, and Peter is awake again.  What more could you want (besides actual Spidey)?

I am swamped with research papers right now (only twenty to go!) and as such am going to turn this review into an opportunity to facilitate learning for you the reader!  You now need to complete these questions in the comments section:

To get full credit, you will need to answer all of them, but you may submit incomplete work for a partial grade.

Speaking of research papers, this panel will somehow be going into my lessons for next semester.

You need to go here and vote for our very own BD to win fame and glory!

That’s enough for now, I’ve got to get those red pens going again.  Next issue will be Chi-Towns, I think.  Who knows.  He’s got a list for us to follow, but I don’t know where it is at the moment and I can’t think straight.  Did I mention I’ve been grading papers?  Feeling rebellious.  I’m not even going to proofread this.