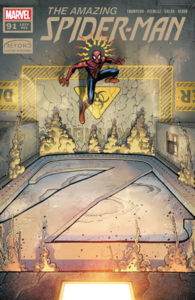 What’s in Room Z?  You’ll have to read the comic (or at least this review) to find out the answer!  Plus, will Peter finally beat the living snot out of Ben for abandoning MJ to the Queen Goblin?  Will the Daughters of the Dragon play a relevant role?  Will Beyond get their comeuppance?  Will Aunt May make more cookies with raisins?  The answers to these questions (well, most of them) and more will be revealed!

Wait a second!  If we have pencillers, shouldn’t we have an inker?  If the penciller inks his/her own stuff, they usually call it Artist.

Ben Reilly is Spider-Man and working for the Beyond Corporation while Peter is out for the count, only Ben isn’t anymore because they are bad people and wiping his memories and Peter’s no longer down for the count, just off his game, so watch out, Maxine Danger – you wanted Spider-Man?  Now you’ve got two of them!

Peter and Ben are at the Beyond Villain Storage Warehouse and fighting all the absolute ridiculous looking villains you could ever think of (you thought the talking sandwiches were odd?). Ben is not well and Peter, despite not being fully healed from the U-Foe attack, is carrying the slack.  The warehouse is just lousy with lousy villains, which are for the most part, easily taken care of with a ton of webbing.  Meanwhile, Maxine Danger is prepping for in case this whole thing goes awry.  She even suggests they may need to open Door Z.  Also Meanwhile, Janine decides that the best course of action for her is to go out to, I don’t know, McDonald’s or something. Ben tries to hack the computer which only brings up a hologram of Danger who tries to lure him back to the fold, then threatens to open Door Z, but Ben decides to open it himself – right before enacting his new signature move – leaving others to fight the the mysterious  figure behind Door Z – It’s the JUGGERNAUT!  Wait, that’s been done already.  It’s THE LIZARD! (Jugger-Lizard?)

And, to help Chi-Town increase his vocabulary…

PASS – Meep the Pokemon Rat – We have the next baby Gog here, folks!  Watch out Grogu! 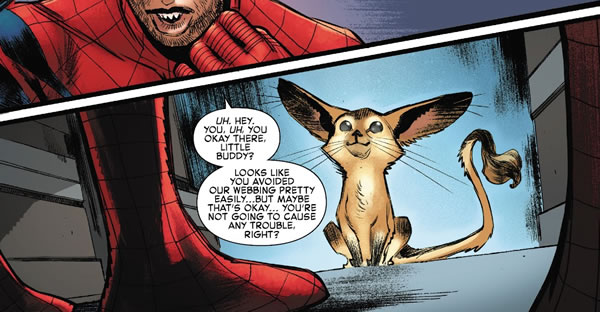 PASS – Bad Villains! – Well, not as many as we had at the end of Spencer’s run, but there’s a good amount here!

FAIL – Bad Villains! – OK, I’ll have to explain this later in the review.

*Editor’s Note* Mark, what have I told you about passing and failing the same item?  That’s strike two.  -BD

FAIL – Amazon and Orange County Schools IT – While not technically a part of this issue and should not be placed here, I’m still perturbed at Amazon for messing up a fantastic digital comics reader and OCS IT for blocking so much that I can’t use my school computer to read the Amazon issues on the web.  This made me so angry, I was telling BD I was done (Chi-Town thinks he talked be back off the ledge, but really it was BD reminding me of the harsh penalties for breaking my contract). 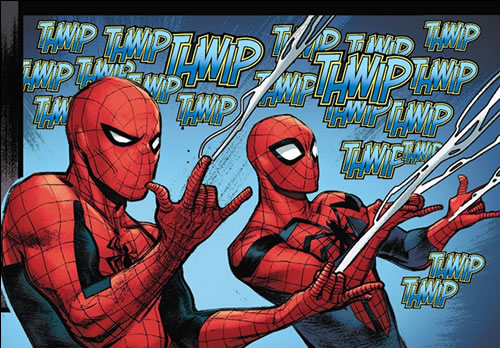 Evan – you thought I was going to pick the barf scene, didn’t you?

Ben Reilly – Ben continues his descent into darkness as his core memories fade away, to the point where he can’t even see some faces. 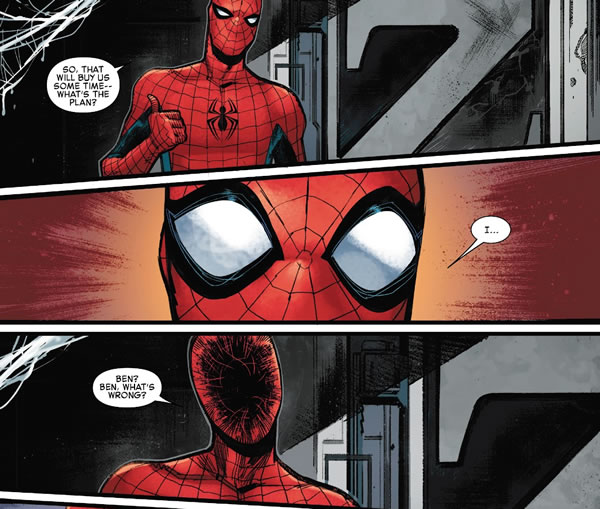 I like the imagery here.  It’s creepy and works great in a dream sequence.  I don’t quite know why his actual vision is being affected.  It’s to the point where he forgets his web shooters and then cannot even see them, causing him to fall almost to his death.  I’m willing to overlook that for the point of it – Ben is no longer the clone of Peter Parker.  That stuff is gone and is continuing to disappear.

The fact that is forgetting pretty much all of who Peter is, including who Spider-Man is, has some interesting possibilities for the future.

In the immediate future, he will have to be the one to take out Maxine Danger and I suspect that he will do it in a decidedly un-Spider-Man fashion.

That leads us to the after story.  What is going to happen with Ben?  My theory is that only Kafka is going to be able to potentially fix the mess that is his brain now, but as she is flying around with little talking knee heads (OK, they don’t talk in the comics, but they do in my head-canon), she won’t be around to take his calls.  We could see a series with Ben as the protagonist in a similar manner that we saw Kaine’s series – all the power, none of the responsibility.  That was a good series.  It would help move Ben to be his own guy.  Hopefully he doesn’t forget Janine in the process.

Villains – Let’s take a look at all the villains: 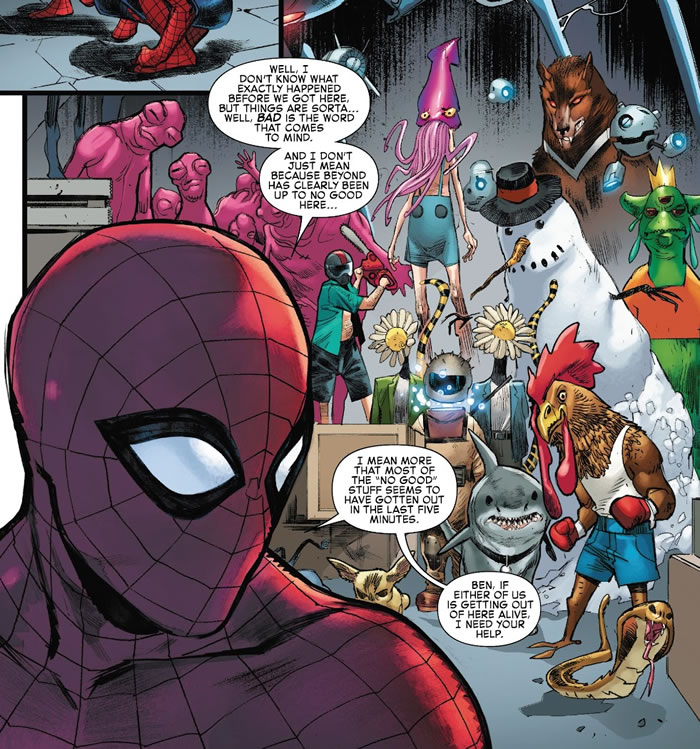 OK, we have Pink Molemen, Short Guy with Chainsaw, Skinny Arm Squidhead Guy, (not exactly the Squid caliber here), Drones (there’s potential – they gave Tom Holland a run for his money), Large Wolf Man, a Sentient Snowman (Olaf?), a large three eyed sea creature with crown and orange shirt, The Flower Head Twins, is that Sewer Urchin?, Jeff the Land Shark (or facsimile thereof), The Fighting Cock (uggh – the jokes that will be made about this guy on the podcast…), Meep the Pokemon Rat, and Happy Snake!

None of these really ought to be a major threat, but Meep can multiply and has really sharp teeth.  Then we see MORE VILLAINS 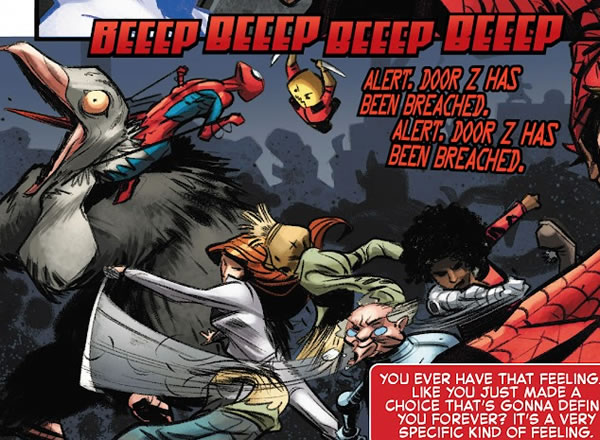 Let’s see, a knife wielding Lego Man, a horse-sized Vulture, is that Scarecrow? and Tinkerer?  On top of that, in a different panel we get a T-Rex (50% more dino than Stegron) and a few others.

So why on earth would I give this a fail?  The villains are not just bad villains, they are just silly.  If we got a few fleshed out, maybe that could develop into something (the One Above All knows I don’t mind a silly villain now and then), but they are just crammed into a warehouse doing… what?  Playing Exploding Kittens with real kittens?  And we know Beyond is capable of creating more threatening villains, so why the snowman?  Why the boxing chicken?  I’m conflicted because I want to like these, but it fell flat for me.  No Hell Bomb potential here (I threw that in for you, Aqu@). Though I would have been really happy if Meep had escaped through the hole in the ceiling (shouldn’t they have run out of webbing by this point?).

OK, knife-wielding Lego Man does have some pretty awesome potential.

The Lizard – Well, he’s bigger than normal and appears to have been drinking quite a bit of Red Bull*…. 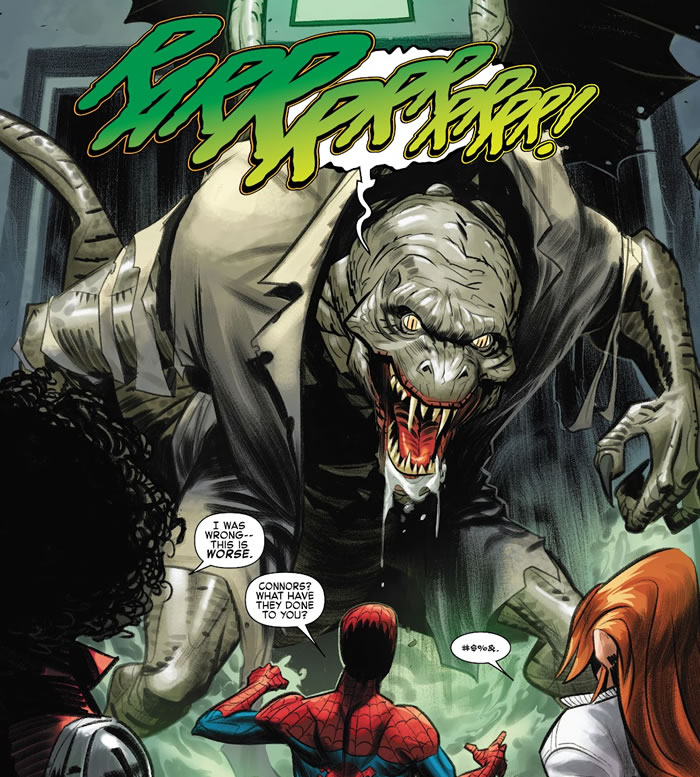 I’m sure I missed something and am going to rely on you guys to point me in the right direction.  Didn’t Connors and Lizard split using the genome thingee?  If so, this isn’t Curt and we are just re-doing the DOOM! DOOM! DOOM! story of McFarland’s first go as a writer in Adjectiveless Spider-Man.  Taking away the Curt Connors side of him makes him nothing more than a monster villain.  Big as he may be.

Even if I missed the Curt and Lizard reunion, I hate Lizard stories, so this reveal was a bit anti-climatic for me.

Give me a backstory to make me love one of these loser villains!

This issue was setting up the pieces for the big finale.  As such, it feels like a bridge issue and not the same quality as some of the issues that came before it. 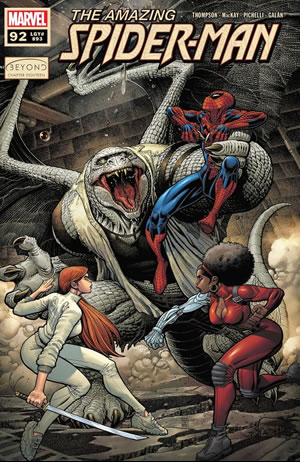 WHAT HAPPENED TO THE LIZARD?! And what could he (or more accurately, it, after recent ASM events) possibly have to do with what has been battering Ben Reilly around? Only one issue to go, so you know, BIG STUFF IS HAPPENING HERE!!!

Well, one issue PLUS another exciting .BEY.  Folks, Chi-Town has you for the next issue and the finale and has mercilessly dumped the last .BEY issue on me.  I swear the guy feels more and more like Ben Reilly…

* I couldn’t find anything on giving lizards Red Bull to drink, but I did find this exchange about giving lizards a Red Bull bath (because of course I looked these things up).

DC’s Peacemaker Is Coming to the Warner Bros. Studio Tour