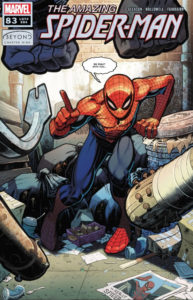 After a disappointing issue last week (but not a disappointing review (see, I am always nice to my BFF Chi-Town)), can the Beyond Board recover and get us back on track?  Would a Peter-centric story do the trick for you?  Well, buckle up, webheads!  Let’s see if this Parker story can restore our faith in the arc!

Story Title: Who Cares?  Not Marvel.  It’s just Beyond Chapter something or other.

Ben Reilly is the Amazing Spider-Man, or at least legally he is.  Peter is not fighting the issue since he is fighting for his life recovering from a poison and radioactive blast from the U-Foes.

Janine is in a swimming pool.  Peter is in the hospital.  He is wimping out on PT.  His tough-as-nails PT nurse lets him lie around in bed until he feels like he is ready.  While on a medically-induced drug high, Peter orders a Spider-Man costume (apparently Beyond hasn’t gotten around to enforcing copyright infringement on E-Bay).  Despite not being able to handle PT, he decides to go out and fight crime.  The two minor crooks easily take care of our hero and Captain America comes in to save the day. Peter decides he’s ready to face PT.

Pass – Allusion – You know I love a good allusion and we get one here:

Nurse Ratched is the nurse in One Flew Over the Cuckoo’s Nest (which sadly I have never watched nor read (but maybe one of you can convince me to put it higher on my to read list)) and has her own Netflix series.

With Slott, we got plenty of allusions, but they were always explained, which takes the joy out of catching the allusion, but here, it’s dropped in pretty effectively.

FAIL – Deus ex Machina – Ok, I’m a sucker for literary terms, but I just didn’t feel that Peter needed the help here.  I think it would be more effective if he went out, got his butt kicked, almost got someone hurt in the process, and the bad guys get away.  The point of this whole endeavor is to show that he is still not ready to be in action, yet they wanted to give us some Peter in the Spidey-suit action.  I appreciate that.  In order to do so, we have to put Peter in a situation where he irresponsibly goes out and endangers himself and others.  That’s OK.  Yes, I know he’s all about responsibility and all, but how many times have we seen him do things and think later?  So that’s still in character.  II just don’t think Cap should have bailed him out of the situation.

FAIL – Sequential Art – This story is rather difficult to follow.  There are dream sequences and such that makes it hard to follow.  It also is a bit unclear at the end.  I think everything with the crooks and Captain America happened, but the ending makes it seem like it was a dream and he is now ready for PT.  And that’s very surprising considering that the artist is the writer as well.

Good Effort, but Fails to Meet Assignment Standards – Web Shooter Joke – After Peter thinks his eBay web shooters might cold actually work, we get this: 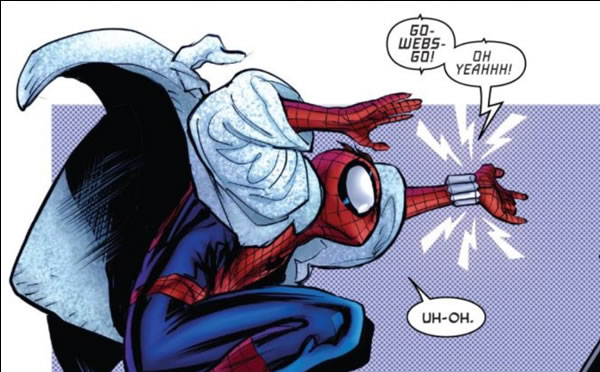 Nice call back to the movies and a funny scene. Falls flat, though, on just a second’s look through.  One, this device should not have any web fluid in it.  But let’s overlook that since he says it looks like it might have been one of Ben’s old shooters.  Two, Peter looks at the device and works on the device.  While doing that, he wouldn’t have noticed that instead of web fluid there are audio circuits? He is an electronics whiz, after all.  I know, this wasn’t worth the time picking it apart.  I just felt like it. 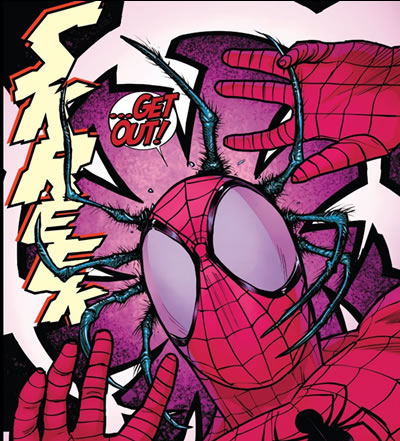 On a scale of 1 (POW) to 10 (BLRKBQRKPQRBLNB),  SKREEK gets a 7.  It’s a quality sound, but I have no idea whatsoever what is making that sound.  His spider-sense?  If so, then props for the guy who has to make a sound up for a noise we’ve never heard.  This is just a weird collection of panels here.  Whatever it is the sound of, it is an unpleasant sound.  I know.  I just screamed it at the top of my voice and neither my wife nor my daughter enjoyed it.

Creepy AI – Langston is getting a little attached to Ben…

Which could be interesting.  Either Langston will turn on Beyond when they go after Ben or Langston will be a rogue agent in all of this working on his own agenda to get Ben to himself.  I imagine that it will result in Langston going after Janine so he can have Ben all to himself.

Spider-Sense – So the spider-sense is no longer focused on outside threats as the inside problems are demanding its full attention.  So, if someone points a gun at him, it won’t go off, but it constantly goes off for the radiation poisoning he has.  OK, I can buy that.  The sense has always been fickle anyway.  My question is will this be a way for them to re-tool the spider-sense so that it is not so powerful from here on out?  I don’t think they will get rid of it altogether, but maybe they make it so that he can’t completely rely on it?

Upcoming Conflict – Check out these two panels (originally in two different places in the comic):

Seems ol’ Petey forgot that he passed the mantle to Ben.  I’m sure that will not at all be an issue in the upcoming stories…

Not Superior – Credit goes where credit is due around here.  Most people thought going into this that it would be more or less Superior Spider-Man – meaning very little Peter and almost exclusively Otto.  But that has not been the case here at all.  Ben has his story and Peter has his and Peter is getting a lot more front and center time than I thought he would.  We’ve said this before – this arc is good.  Too bad that it was pushed into Amazing after that crummy ending to the Kindred.  We had a lot of concerns about story by committee, but they have been together and fair in their spreading of attention.

Let’s go back to those new positive (paid for) headlines:

Which I have only a small problem that it is implied that Glory Grant is paid off to write positive news.  Daily Bugle?  OK.  Glory Grant?  Not so much.

Who can come up with some more?  I’ll start:

A Peter Parker story that shows him fighting through the pain and helps to explain the Spider-Sense issue is nice, but it just didn’t work for me. 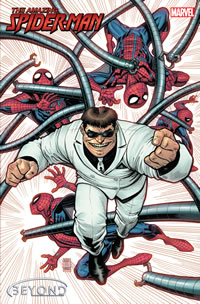 The events of ASM #80.BEY have set Doctor Octopus on a collision course with the Beyond Corporation and their Spider-Hero in residence. Ben Reilly isn’t the only one with new tricks up his sleeve, or, in Ock’s case, MANY sleeves.

Well, apparently I have that one and not this one.  But I wrote this review, so I’m posting it anyway.  So see you next week, I guess.

Fortnite: When Will Chapter 3 Begin?

The Wolf Among Us 2 Key Art Revealed