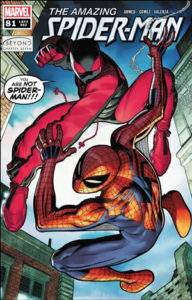 Ben Reilly swings into Brooklyn – and Miles isn’t about that at all.  All this and a root monster too!  This issue is guaranteed to absolutely NO old people flirting and making innuendos.  So what are we waiting for?  Let’s get into it!

Were you looking for Peter Parker?  You came to the wrong place.  Ben Reilly is the new Spider-Man and Peter is in the hospital getting fixed up by Doctor Octopus.  Ben works for Beyond Corporation because they helped him out.  But all is not going well.

Some monster named Rhizome (which means ‘mass of roots’ by the way) is destroying buildings in Brooklyn.  To show that they care about the little people, Beyond is sending Ben out to stop it.  He is to also stop Miles from using the Spider-Man name while he is there.  Miles doesn’t take kindly to a false Spider-Man representing Beyond in his neighborhood, but they put aside their differences and take out Rhizome.  Ben is reprimanded for not enforcing the brand name and Marcus is fired? put on leave? for Ben’s failure.

PASS – The Cover – At the risk of everyone comparing me to BD, I like this cover and Miles is pretty much saying what we all are thinking.  It’s backed up in the issue too, so that’s a bonus (I can’t use Grant’s Misleading Covers tag on this!).  It’s also nice to see that Miles recognizes that this is not Peter he is facing, despite them sounding the same. It’s a nod to his recent Clone Saga (which actually had a relevant editor’s text box, presumably by Nick Lowe since it has his initials, but my guess is it is really Cohick trying to make her boss look good since we zilch editor boxes until she arrived on the scene), which I read on MU and enjoyed.  Never thought I would say that about a clone saga.

FAIL – No Peter Parker – I know we are focusing on Ben Reilly as Spider-Man and Peter doesn’t need to be referenced, but in the last .BEY issue, Peter woke up.  That’s big news, but it is not even alluded to here.  I would have expected maybe Ben thinking that he wanted to go check in on him now that he’s up, but we didn’t even get that.

FAIL – Right fight, wrong time – The people here just had their homes destroyed.  They are hurting.  Some are injured.  Some no longer have a home.  The fight here is ill-timed for the “heroes”.  While Miles should know better, I get that he’s a bit spooked about impostors.  Ben, on the other hand, is a grown adult representing a company.  He should know better than to engage here.  How hard would it be for him to draw Miles away from everyone or, I don’t know, be the better man and responsible adult? 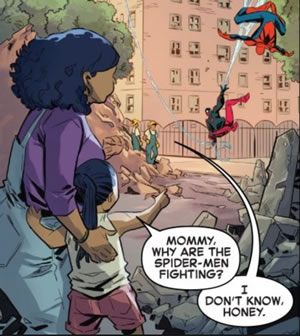 FAIL – Venom Blast – I love the venom blast.  It helps to separate Miles from Peter and since they have made it to where it drains him, it is no longer an over-powered deus ex machina.  Now, I am a little behind in my Miles reading, but to my knowledge, he cannot shoot his blast.  It is a touch thing.  The closest he can get to shooting it is by touching an object and sending it through that, like conducting electricity.  In this issue, he is blasting all over the place, and clearly not just sending it through his webbing.  If I am wrong about how this power works, please let me know.  I checked with the biggest Miles authority I know, and he told me it was a touch thing.  I also checked online and did not see where he could shoot it.  However, the writer here is Saladin Ahmed, so either he recently changed the power set or the artist just didn’t know.  I might be wrong.  I was wrong once in college and could be again, so I am keeping an open mind.

On a scale of 1 (POW) to 10 (BLRKBQRKPQRBLNB), ZZZZAAAT gets an 8.5.  I want to hate it because it shouldn’t even be there, but that is some high quality lettering going on and color shading and how can you not like four Zs in a row?

The Assessor – This was a good story back in Miles #8, I think.  Miles gets trapped and they keep putting him through tests to gather as much information about him as possible until he dies.  It really did a number on him.  Later, Iron Man decides to take this guy down and gets his butt handed to him.  It’s a bit intriguing that the Assessor might be tied into Beyond.  I cannot tell in the last panel, but it seems that Director Danger is holding a container of roots.  Maybe she just collected it from the scene to put to her own use or maybe she is working with the Assessor if he is indeed the creator of it. 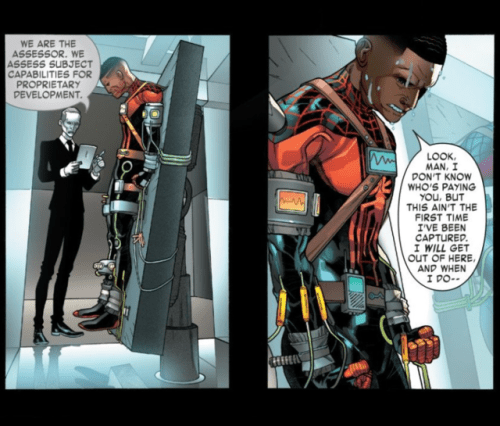 Beyond – We keep getting teased that Beyond is not out for the good of mankind, but it’s sort of being marketed as Roxxon type of bad, but we know that Beyond has to be more than just another Roxxon.  I am trying to figure out what their end game it, but so far, I’m not seeing any clues.  Has anyone else noticed something I am missing?

The biggest problem with this book – I’ve said it before, but I think it bears repeating.  This is a good story.  It is being well written by a team that is in line with the overall story and each other’s contributions.  The pace is moving rapidly.  So why is it that many Spider-Man fans are not reading it?  The answer is obvious, of course.  We want Peter Parker the Spectacular Spider-Man!  (A little cover allusion for you old-timers.)  If this had been in Amazing for about five issues or less – no problem (well, some would still gripe, but the large majority of us would be fine).  If this story line were in ASM, but we had Peter Parker over in Spectacular – then probably no problem.  They could easily have had Peter take virtual courses while he travelled with MJ while Ben held down the fort in New York.  This will always be the case when you have an established character.  It is not just the hero that we want to see.  In fact, more often than not it is the character under the mask that we are paying the big bucks to read.  That’s why Iron Man fans weren’t too happy when RiRi took over.  That’s why fans get upset whenever this sort of thing happens.  This story is good and they did it and the fans a disservice by the way they are presenting it.  Just give me Peter Parker.  Thankfully, it looks like we will get him next issue.  On top of all that, we had the quite unsettling manner in which Kindred was wrapped up, which unfortunately for the Beyond Board, bleeds a bit over onto them.

This continues to be a fun ride (and that’s important to me), though there are a few irritating bits about it.  The writing team flow well together and each issue feels like it is its own story, yet still advances the overall big story.  I like that a lot.  I like feeling that I paid my money and got a story for it, rather than just another bit of the rising action.  Well done on that front.  I think I made my grievances clear earlier (a bit of an early Festivus, you might say). 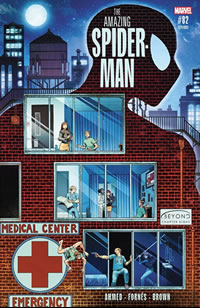 Something horribly wrong is happening at the McCarthy Medical Center. Mary Jane Watson is trying to nurse the bedridden Peter to health, but when Peter’s roommate disappears, MJ has to step up. Can MJ and a nonmobile Peter get to the bottom of this hospital mystery?

Not going to lie – this looks like the issue we’ve been waiting patiently for!

Chi-Town has you next, I think. Actually, at this point, I have no idea.  He is in charge of the schedule and he keeps texting it to me in braille and binary code and so maybe I’ll see you next issue, maybe I won’t.  It’ll be a surprise!  At this point, I don’t care because I finished up research papers this week!

Dune: Part Two May Use a Major Piece of Mandalorian Technology