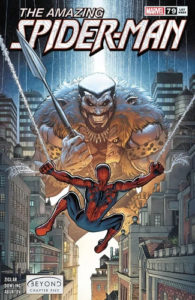 We last left off with Kraven stalking Ben and about to attack!  Are you ready for an all-out fight-filled book of two clones gong at it?  No?  Well, then, this book is for you!

Ben Reilly is working for Beyond as Spider-Man.  They have all sorts of scientists working to make the Ben the best hero ever, but is there a more sinister reason behind their motives?

Some new hire at Beyond gets drunk and stumbles into an alley where something unknown happens to him.  Ben is not happy that Beyond is spending so much time fine-tuning his equipment.  He creates a way to turn off their monitoring and goes and visits Peter in the hospital where he has a little heart to heart before leaving to stop an armored-car robbery.  After that, he goes on a call to help out a Beyond Corp big wig only to find out that he’s dead and Kraven87 is there waiting for him.  Ben is pathetically not ready for this fight and barely gets out alive before getting peppered with tranq darts sending Ben off with Lucy in the Sky with Diamonds.

Pass – Street-level Spidey – Give me a street-level story over a cosmic one any day. 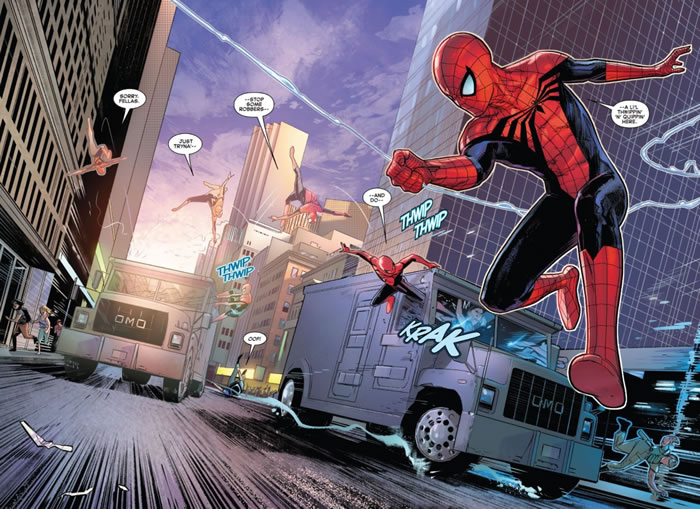 Fail – Eye Color – Ben’s eyes are brown in one panel and blue in another.  Small detail, but I would think that the colorist would certainly be on top of something like that.

Incomplete – Doug – I suppose Kraven87 got a hold of him?  There is a figure on the rooftop stalking him in the alleyway while he sings his song that I am guessing is Kraven87, but I am a little unsure of why Kraven87 would be stalking Doug. Doug just started working there, so I doubt he had the kind of information that Kraven87 would need.  My best guess is that this will factor into a story later.

On a scale of 1 (POW) to 10 (BLRKBQRKPQRBLNB),  WHOP! Ranks a 5.  I was conflicted on this one.  It’s such a classic oldie that looks like it would fit right into a Batman 66 show and even has an exclamation point while breaking panel walls.  However, despite these pluses, the coloring of it looks like someone had a WHOP! sticker and just slapped it on over the panel.  It looks out of place.

Ben and Peter – While the cover advertises a fight with Kraven, the fight is really not the main plot point of the issue.  What do we get from the talk? 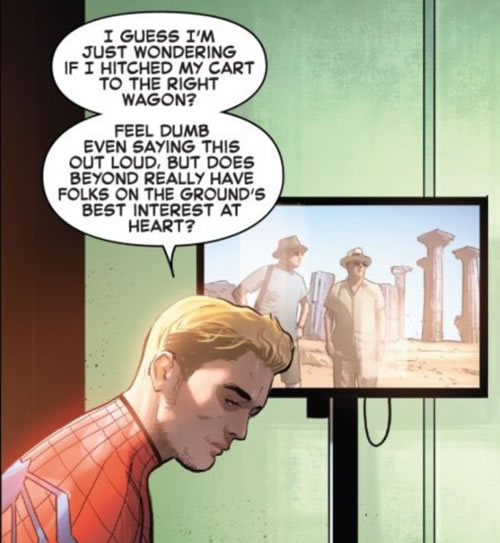 This does not sound like someone who went into this to investigate and dismantle from the inside.  This sounds like a guy who was offered what he wanted – the legitimacy, redemption, and his woman out of prison – but now has misgivings.  I don’t blame Ben for jumping at this opportunity, but we have been discussing earlier if he and the women were working together on this.  It does not sound like that.  What it sounds like is that both will come to their conclusions different ways, but at the same time.  Either that, or Colleen and Misty will figure it out before Ben does and Ben will be in a spot where he may have to fight them.

This story arc is enjoyable despite it not the Spidey I want to read, it is a fun read.  I would so much like for Ben to spin off into a Ben Reilly the Spectacular Spider-Man and continue to be written by these writers with occasional team-ups with Peter.  If you want a fun take that was written pre-clone saga on what would happen if the clone had lived, check out What If? #30 vol 1.

Kraven87 – I’m glad that Kraven87 is just off doing his thing and not brooding about being a clone or if he is worthy of the mantle.  He just picks it up like of-course-it-belongs-to-me and goes to work.  By the way, if you are curious why he said the Deadpool and Wolverine bit, that is because Kelly Thompson write a Deadpool arc that has Deadpool as king of the monsters and Kraven87 goes over there and kicks some Deadpool and Wolverine butt for a while.  You can read it on Marvel Unlimited.  And if you are a bit miffed at how Kraven87 got the drop on Spidey, well, just remember that the real Kraven was able to do that from time to time as well.  But I will agree that Ben, despite his advance tech, seems a bit inept at this gig.  First Morbius kicks his butt and now Fake Kraven is mopping the floor with him.  I don’t want my hero to be invincible (unless, of course, I’m reading Invincible), but I do want Spidey to at least put up a fight.

To be fair, Ben did just get blasted by an explosion, so I can buy that for Kraven87 getting the upper hand.

The Beyond Board – The Crawlspace has been pretty hard on the concept of a group of writers. In the past, it did not play out well. This came mostly from miscommunication of the writing team.  This group, though, flows seamlessly from one writer to the next.  They seem very much aware of what the previous stories contained and what the tone of the story should be.

This feels like it is too detailed to just be a random background scene.  Does anyone recognize what is on the TV here? 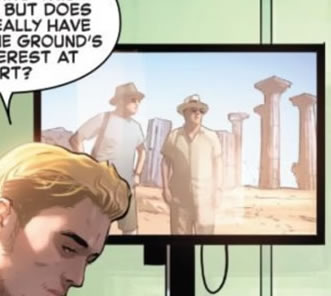 All in all, not much happened in this story, but it was enjoyable.  The plot is thickening and things are being set in motion enough that I am entertained.  I can’t keep holding it against the writers that this is a Ben story, and not a Peter story, but it is hard to displace that thought from my head when it comes time to grade it.

What grade do YOU give it?

Chi-Town will bring you #80 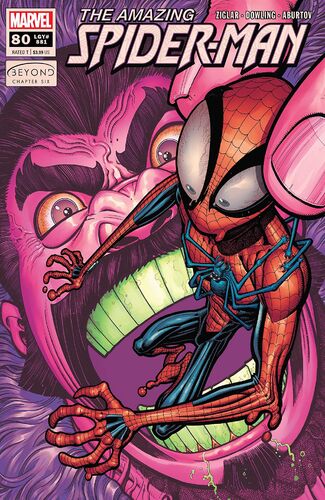 But do not fear!  I will be back for… 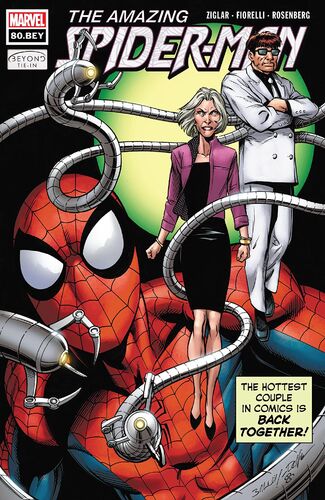 OK folks, I’ll be back next week with not on this Doc Ock and Aunt May tryst, but also I will reveal my greatest shame as a Spider-Man fan.

And of course, Ryan is covering them all because he is just a beast like that.

* Ok, so “Hunt the Wumpus” is not the title of the issue.  It is just “Beyond Chapter 5”, but that’s so boring.  Now, I bet you are wondering what a Wumpus is.