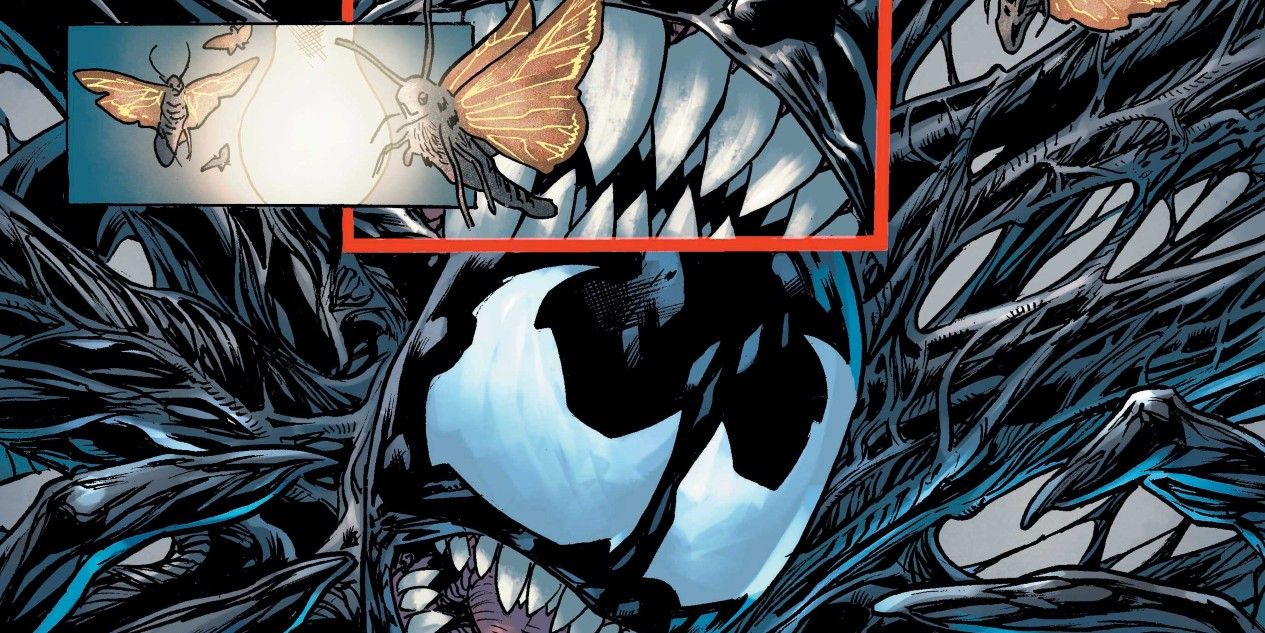 Eddie Brock’s signature phrase of “We are Venom” took on a whole new meaning in Marvel’s latest ongoing run of Venom. In Venom #1, writers Al Ewing and Ram V and artist Bryan Hitch created a brand new status quo for the Brock family. Eddie, now ‘The King in Black,” embarked on intergalactic adventures where he and his symbiotes tried to become a force for good. Back on Earth, Dylan Brock, accompanied by Eddie’s old Symbiote and the being known as Sleeper, got into trouble and danger. Then at the end of the issue, everything changed.

A well-armed attack force seemingly killed Eddie Brock, forcing Dylan to bond further with the Symbiote, which sent him on the run from several forces gunning for him and his Symbiote. However, the end of Venom #1 showed Eddie embarking on a separate and very strange cosmic journey. Then, in Venom #2, V and Bryan Hitch put the focus back on Dylan, who found himself entangled in the ever-growing intrigues of symbiotes on Earth. CBR spoke with Al Ewing and Ram V about Eddie and Dylan’s adventures, delved into the strange alien being involved in both of their quests, and discussed their future plans for Venom. Also included with this interview is a sneak peek at Venom #3’s pages, drawn by Bryan Hitch, inked by Andrew Currie, and colored by Alex Sinclair. 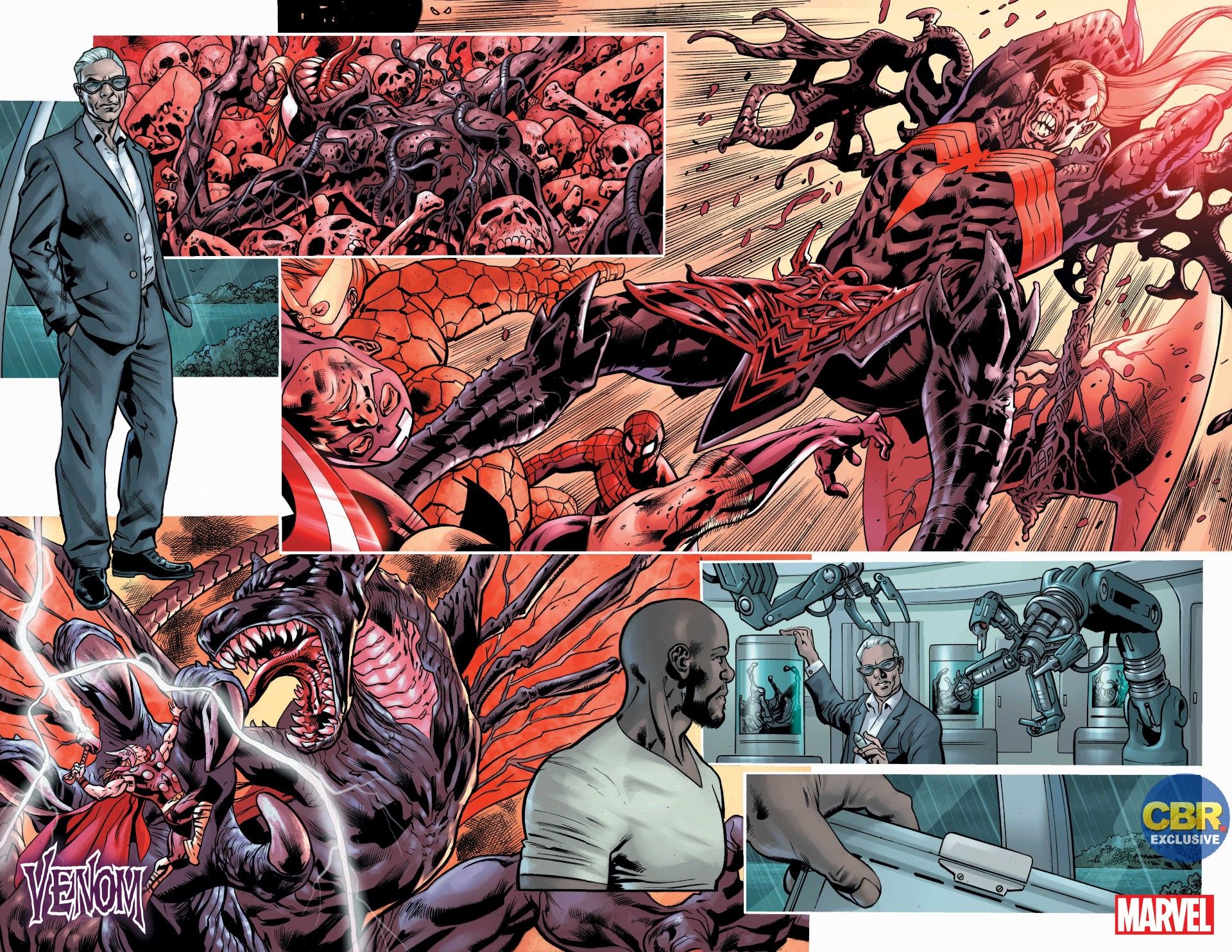 CBR: Venom #1 ends with Eddie possibly dead and in a form of symbiote afterlife where he’s greeted by a being called Meridius. In the present day, we see another entity that looks a lot like Meridius standing over Eddie’s bones. What can you tell us about Meridius and this being? What inspired their creation?

Al Ewing: I have to tread very carefully to avoid major spoilers, but I can let you have a few hints — for instance, I can tell you that that is indeed the same Meridius standing over Eddie’s bones and also greeting him in the far future. It’ll be a little while before we find out more about that garden at the end of time, but suffice to say the mysterious Meridius has got big plans for Eddie, Dylan, and the Venom Symbiote. When you find out what those plans are, it’s going to twist your brain like a pretzel.

Ram V: Yeah, like Al, there are spoilers here to be side-stepped. For Dylan’s narrative, Meridius is the puppeteer in the dark, manipulating events and placing pawns. His interest in Dylan and Venom is tangible and bordering on obsession. But all this to what end? And why is Meridius interested in a boy who potentially presents no tangible threat? Read on!

Issue #1 also ends with Dylan Brock finally bonding with his father’s old symbiote and the two connect after watching Eddie die. What does that mean for their link?

V: In Venom #2, Dylan is still reeling from the loss of his father. His father’s warning not to bond with the symbiote almost seems to drive a wedge between Venom and Dylan. And beyond this, there are larger machinations falling into place — looming threats that Dylan is not yet aware of. He will need to soon be rid of his naivete and his fears if he is to stand against all that is to come but can we ask such things of him? After all, he is only a boy. 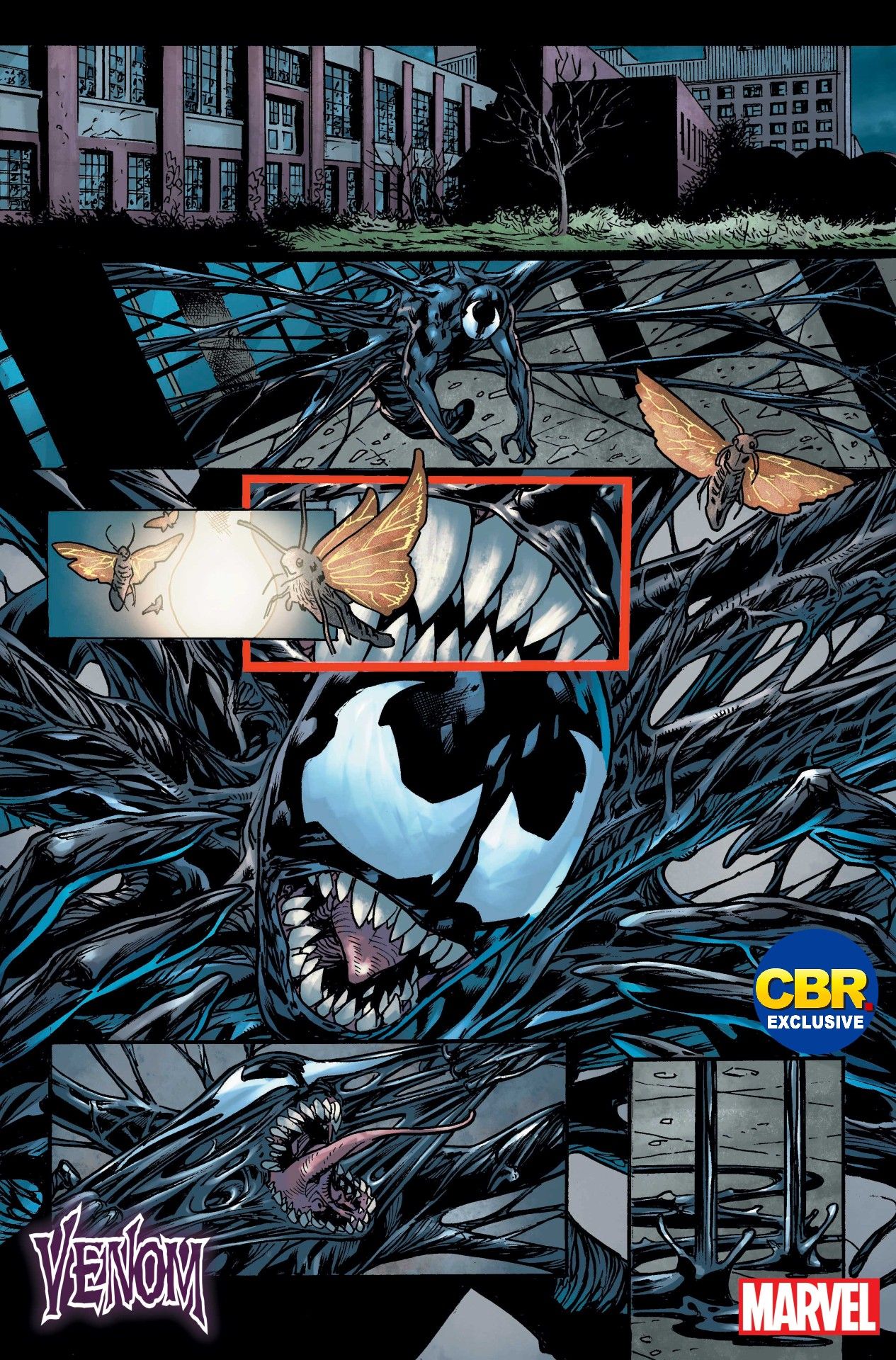 Sleeper was a part of the action in Venom #1-2. Will they be part of the supporting cast moving forward? What’s your sense of how Sleeper views the Brock family?

V: Sleeper will be part of the supporting cast moving forward. I like to think of Sleeper very much as Dylan’s friend,  rather than having much to do with the family or Eddie or Venom. Sleeper is protective of Dylan and perhaps able to offer a more level head where Venom might not be so even-keeled.

If the first issue is any indication, it looks like your volume of Venom will continue the combination of cosmic horror and superhero action that defined Donny Cates’ run, but will also feature some more psychedelic sci-fi elements as well. Is that a fair description of your immediate and/or long-term plans for the book?

Ewing: Psychedelic sci-fi is exactly the word for it!

I’m inspired heavily by J.G. Ballard, as well as some of the other pioneering New Wave SF authors, including Moorcock. There’s a certain degree of cosmic horror afoot — you’ll find the shape of that on my end in good time when we return to Eddie in the garden, but on Ram’s end of the story, I think it’ll become all too goopily apparent. And as for superhero action — both ends of the story have plenty of it!

RELATED: Venom’s Worst ’90s Threat Is Back – But What Does That Mean for Marvel Symbiotes? 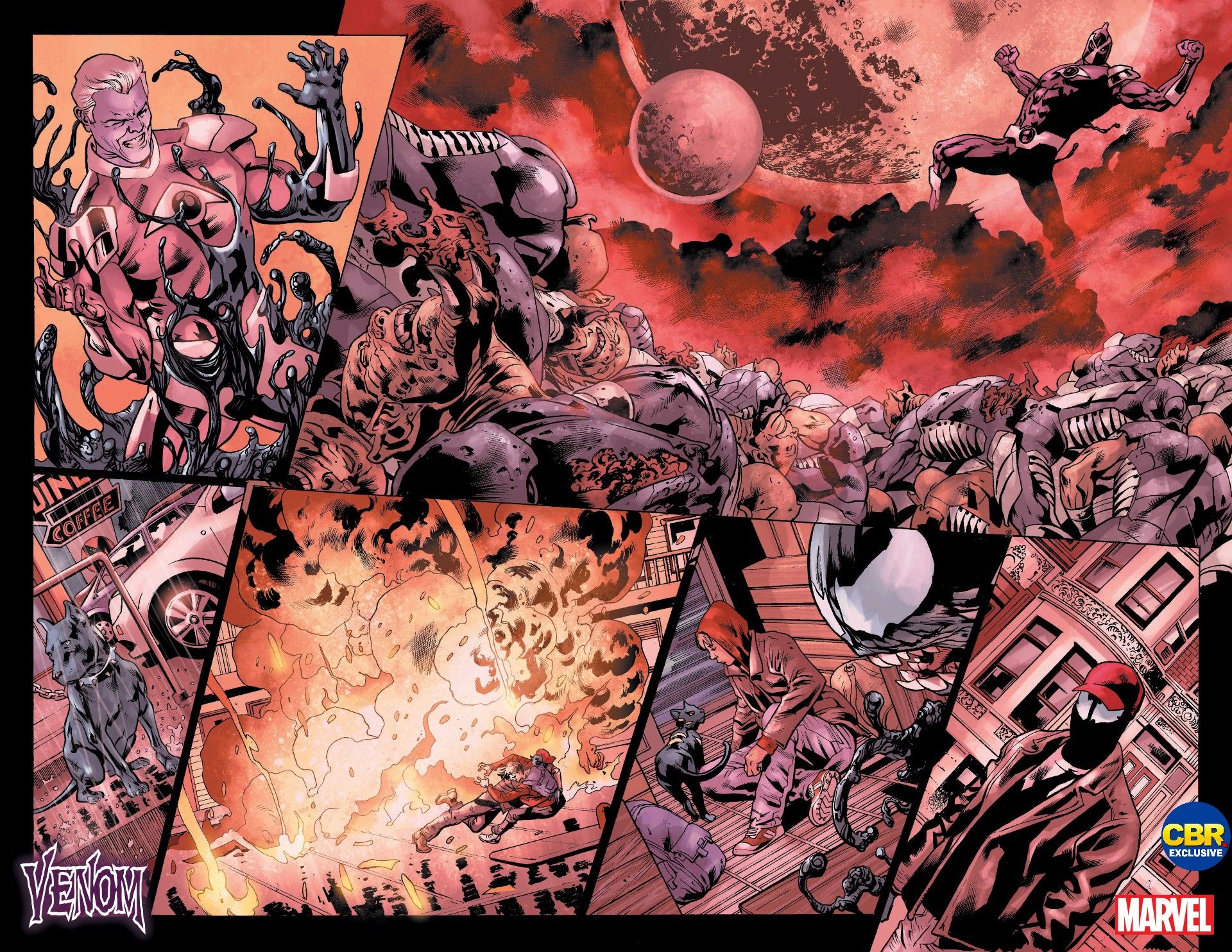 Venom #1 also referenced the recent cosmic invasion of Dormammu that was chronicled in the “Last Annihilation” crossover between Guardians of the Galaxy and S.W.O.R.D. Will we see more connections and established Marvel Cosmic characters in the months ahead?

Ewing: You definitely will!

Those who picked up the FCBD Spider-Man/Venom issue will have noticed a certain time-travelling Conqueror literally crossing swords with Eddie/Venom — I think Kang definitely counts, and he’s going to have some interesting revelations for Eddie over the course of the next year. Of course, you never quite know which Kang you’re dealing with… Or when you’re dealing with him.

The Extreme Carnage event redefined the larger world of Marvel’s Earth-based symbiotes like Anti-Venom, Silence, and Toxin. Do you have plans for those characters or any other established Marvel symbiotes moving forward?

Ewing: On my end of our double-ended story — we can expect a whole raft of new symbiotes, at least a couple of whom will be coming to Earth to cause trouble. Who are they? What’s their connection to the mysterious Meridius? How can they stand up against the King in Black? All of these questions will be answered… In ways, I don’t think you’ll possibly be able to guess.

V: Yeah, I’ve got plans for symbiotes old and new. I also have plans for symbiote related characters and organizations and preoccupations old and new. I like the fact that comics feel like a part of a greater, ever changing, ever mutating narrative — even if that’s a little messy at times. So expect to see deep cuts and new twists in equal measure.

It’s also clear you’re interested in further exploring the elements of symbiote culture and biology that Donny Cates developed in the previous volume of Venom. Which of those aspects are you most excited to examine?

Ewing: Both! The biology of symbiotes is definitely going to be explored. As for their culture… Well, we’re going into the far future of symbiotes and seeing where they end up. Is it a happy ending for the symbiote species? Or something a little more nightmarish? Take a walk around the Garden… And find out.

V: I think I am more interested in examining what we know and assume about symbiotes. I don’t know that there is such a singular thing as a symbiote culture. I don’t know that we have truly established what symbiote biology is. I think that open, malleable concept is quite exciting to dig into — especially from the POV of young man on the cusp of his own adolescence.

Ewing: Bryan’s great. It’s a real joy seeing what he does with the new pages. I think the goop and goo of Venom bring out the best in him, especially contrasted with the solid landscape Dylan’s currently rampaging through. I’m really looking forward to how he handles the Eddie end — if Venom #1 is anything to go by, it’ll be worth the wait. Bryan’s very involved with the process at all stages. He’s been a true professional so far, which inspires me to be a little more orderly and less chaotic in turn.

V: It’s a thrill of course, to work with an artist like Bryan, whose work I think is formative in how we view superhero comics today. He seamlessly transitions from the grand cosmic narratives to the grounded personal drama in the blink of an eye. That’s something special to witness. I’ve had a blast writing scripts that are visually engaging and interesting for Bryan to work on as well!

Finally, as solo creators, you’ve both proven your aptitude for superheroic/horror stories. So what’s it like telling and building this story together as co-writers?

Ewing: It’s fun. I liken it to being in a band — every trade is an album, every issue is an individual song, and Eddie and Dylan are our instruments. I play Eddie, Ram plays Dylan. Our musical sensibilities aren’t that different, but where they differ we get some really interesting combinations. Obviously, Bryan’s just wowing the crowd with guitar solos on every track. And — here’s where the analogy completely breaks down — we’re writing a rock opera and building up to a massive symphonic crescendo, probably with the whole orchestra. So it’s exactly like that! Also occasionally we do zoom calls.

V: Yeah, sticking with the music analogy to add to what Al said, I think the most exciting thing for me is the call and response mechanism of it all. Ideas come from all directions — pushing, pulling, and changing what feels truly like a story that has its own life and will. It’s just a matter of wrangling that into each issue. Like being in a jam session and discovering a song as you’re playing along and suddenly you know exactly what it’s supposed to sound like.

Ewing: We should end on a big thank you to anyone who’s pre-ordered the book, and anyone who waited patiently to pick it up.

V: Yeah, the readers have been fantastic. It’s always a bit of a challenge — new ideas, new stories, but change is at the heart of comics. More so at the heart of symbiotes and Venom, I think. So it’s fantastic to see the book received with such excitement and energy. I think this story truly has everything in it. I think readers are going to be comforted, challenged, excited, and surprised by where it all goes.

The Batman’s Muzzle Flash Sequence Was All Shot Practically