The most interesting aspect of Abby Jame’s hilariously titled Emotional Data Test Tube Sugar Baby is its reliance on social media culture to simultaneously critique and revel in its banality. That’s the meat of the comic, but the scaffolding is a rock-solid cyberpunk plot with interesting twists and turns. The reader is thrown right into the middle of the narrative, as bored young woman Tink and her sentient computer teddy bear are bored and hungry. When she texts her sugar daddy Greg for money, it sets off a bizarre series of events that include the apocalypse (for starters), being grown in a test tube, sugar daddy incest, being used as a tool by both the government and the resistance, and a great deal of hot girl ennui. 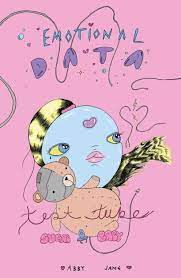 Jame is a member of the Michael DeForge school of thin-line characters and maximum environmental detritus. The character designs are distinct and cartoony, with her entire world stylized to the nth degree. The colors are pastel to the point of nearly being cotton candy, changing on nearly a panel-by-panel basis. The matter-of-factness with which Tink regards her fantastic environment is integral to the humor of the book, which is the essence of the work. Tink is a character with very few fucks to give and is unimpressed with the potential end of the world, the government conspiracy, or much else beyond her own personal gratification. Yet, this is the way she was raised and designed. When her apparent contact in the underground, a woman named Mits, shows her their secret weapon, a fantastic artificial being named Amanda, Tink’s reaction had me howling: “She looks fun and slutty.” An indignant Mits replied, “She’s not that,” but Tink said, “I know a fun slut when I see one.” While this was a ridiculous sequence, it actually rolled directly into the plot in an unexpected way. 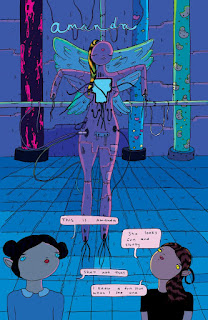 The only thing Tink did care about was a boy named Brad, and specifically, their social media relationship. When Brad texted her, she was outraged that all he said was “how r u?,” declaring that to be hostile. She fretted over Brad unfollowing and refollowing another girl when the world was at stake and she was confronting her test-tube dad/sugar daddy. When told her destiny was to be uploaded with a program that would destroy the government, but it would kill her, she only agreed after Brad hooked up with Gretchen. There’s a surprising psychedelic sequence that ties into the story and the REAL story (her social media life), culminating in an interplanetary journey. In the end, she looks for more boys. This is a story that is so totally of this moment in the zeitgeist and yet completely cognizant of this, all while transcending it in a remarkable series of gags.

Why Did George Perez Have to Redo the Ending of His Wonder Woman Run?