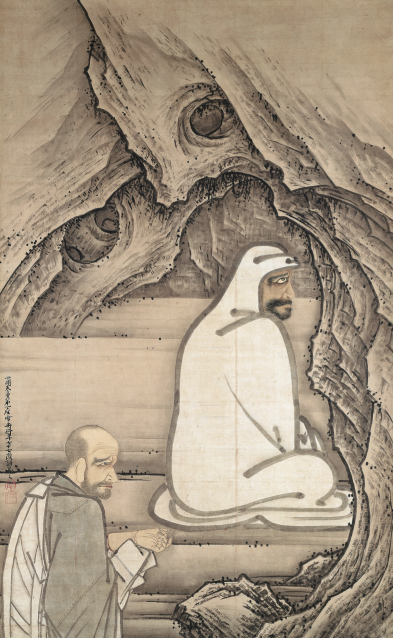 Are you familiar with Sesshū’s painting Huike Offering his Arm to Bodhidharma? Dated 1496, this famous ink painting shows the Chinese acolyte Huike proffering his severed forearm to the Indian sage Bodhidharma as a testament to the depths of his dedication to mendicant practices and his desire to become Bodhidharma’s disciple in the Buddhist path. Bodhidharma, wrapped in a white cloak, sits facing the wall of a cave with his back to Huike, as he had when he ignored the man on previous visits. With this gruesome gift, Bodhidharma officially accepts Huike as his student. Yet if you inspect Bodhidharma’s face closely, it looks as if he’s rolling his eyes, bored and irritated by the cloying fan-pest behind him.

Whenever I see this painting, I think of the late Shirato Sanpei (1932-2021) and my first and only time talking to him, in 2006. I was wrapping up my PhD dissertation about the early years of Garo, and was readying a spin-off essay for publication in International Journal of Comic Art about The Legend of Kamuy (Kamui-den, 1964-71). I had faxed a letter to Akame Productions (Shirato’s studio) asking for permission to use a number of images in the essay. When I phoned to follow up, Shirato himself answered, and yelled at me “Dame! Dame! Dame!” (“No! No! No!”) and hung up. At the time, my Japanese wasn’t great. My grasp of business Japanese was poor, and my understanding of honorifics worse. I could only regard expressions of humility as weakness, and had yet to learn that confidence easily presents as arrogance in Japan. Scholar and editor Asakawa Mitsuhiro kindly interceded to make amends. It took me days to write a proper apology letter. I called Akame Pro again. Li Haruko, Shirato’s wife, answered, and relayed her husband’s begrudging acceptance. I doubt I would have gone as far as hacking my arm off, but I would have happily spent the winter meditating in a cave had sensei ordered me to. 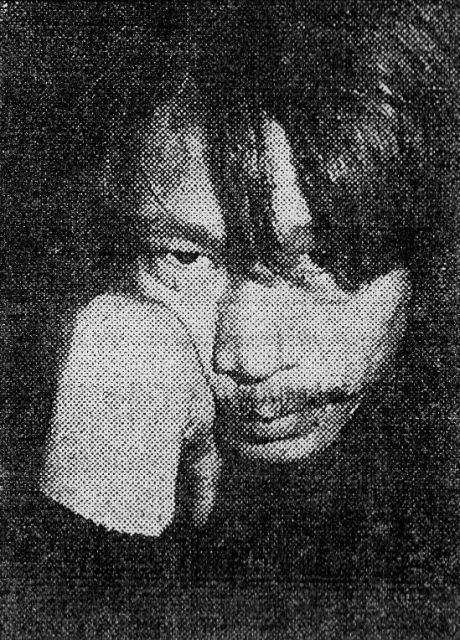 Hearing of Shirato’s passing stirred up lots of feelings and memories. Had I not been introduced to Shirato’s work circa 2000, I would not have committed to becoming a full-time manga researcher and translator. Tsuge Yoshiharu turned me on to Garo; Sasaki Maki and Hayashi Seiichi convinced me that I could write about manga in the context of art history and contemporary art (I studied art history in graduate school); but Shirato’s Ninja bugeichō: The Legend of Kagemaru (1959-62) and The Legend of Kamuy showed me that manga could be history, politics, philosophy, art, subculture, and entertainment all in one, hooking me for life. Much of what I know about premodern Japanese social history comes from reading and researching Shirato’s work. In art history, one learns much about bushi (samurai) and chōnin (merchant) culture, but peasants and outcasts are rarely mentioned. Just as I learned words like tsurugi (sword), kusari katabira (chain mail), kusari gama (chain sickle), taimatsu (torch), and hagoromo (feather robe) from playing Dragon Quest obsessively as military brat in Kanagawa prefecture in the ‘80s, so Shirato’s manga taught me matagi (northern hunter), ikki (peasant rebellion), yonaoshi (messianic revolution), nengu (agricultural tax), jikiso (a petition to the highest authorities), genin (servant, slave, foot soldier), and hinin (outcast “non-person”).

The first Shirato manga I read was, I think, Ninja bugeichō. It was in 2000, in a graduate seminar on modern Japanese literature at Yale University, taught by John Whittier Treat, best-known as the author of Writing Ground Zero: Japanese Literature and the Atomic Bomb (1995), but who touches on Ninja bugeichō in the context of the protests against Anpo (the US-Japan Security Treaty) and the politics of the Sixties in The Rise and Fall of Modern Japanese Literature (2018). That student militants read manga inside the barricades at University of Tokyo is a cliché of the 1960s, as is Mishima Yukio’s dismissive claim that they modeled their protests on Shirato’s manga. But did you know that liberal intelligentsia-in-training at an American Ivy League university in the 21st century also debated Kagemaru’s politics? To my knowledge, the only other person to have written seriously about Shirato in English is Yuriko Furuhata, who talks about Oshima Nagisa’s 1967 adaptation of Ninja bugeichō in the context of “eizō-ron” (image theory) in her book Cinema of Actuality: Japanese Avant-Garde Filmmaking in the Season of Image Politics (2013). 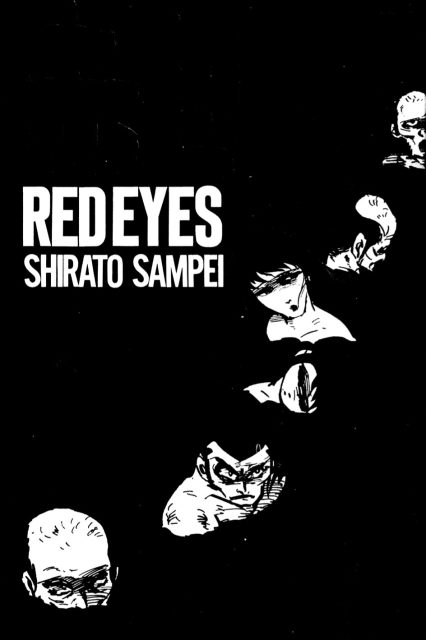 Though Ninja bugeichō has been translated into Spanish and The Legend of Kamuy into French, there is a painful dearth of Shirato’s work in foreign languages. Which is ironic, considering that Shirato was one of the first mangaka to be translated into English. While the 1978 edition of Nakazawa Keiji’s Barefoot Gen from the transnational antiwar outfit Project Gen is often cited as the first manga to be translated into English for distribution outside of Japan, a handful of Garo-related manga had been translated seven years earlier in Concerned Theatre Japan, an English magazine published in Tokyo dedicated to the angura and shōgekijō (little theater) scene. In a special manga issue published in 1971, translated are Tsuge’s Nejishiki (1968), a chapter of Akasegawa Genpei’s Sakura Gahō, and the first half of Shirato’s kashihon Akame (1961) as Red Eyes, in honor of its dramatic adaptation by Jiyū Gekijō in 1967.

In his pioneering survey, Manga! Manga! The World of Japanese Comics (1983), Frederik Schodt spotlights Ninja bugeichō, framing its relevance and popularity in relationship to Anpo 1960. “For many,” he claims, “Ninja Bugeichō became a substitute for reading Marx.” By way of Schodt’s book, which includes the famous page from Ninja bugeichō showing Nobunaga horrified at Kagemaru still declaiming despite having been decapitated, Kagemaru’s head made its way into the “pictorial vocabulary” chart in Scott McCloud’s Understanding Comics (1993). In 1985, the New York-based alternative comics magazine Raw included Tsuge’s Red Flowers alongside Terry Johnson and Sugiura Shigeru in its snapshot of “alt-manga,” highlighting Garo in supplemental texts, but (if I’m not mistaken) making no mention of Shirato. 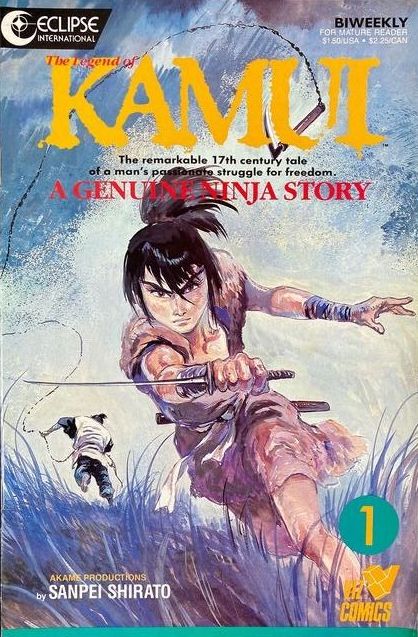 Shirato Sanpei and Akame Productions, The Legend of Kamui, no. 1 (Viz Comics & Eclipse International, May 1987).

Then, in 1987, Manga America Year Zero, Viz Communications, the North American affiliate of Japan publishing powerhouse Shogakukan, teamed up with Eclipse Comics, an independent comics publisher, to bring over a range of Shogakukan titles, beginning with part two of Shirato’s Kamui Gaiden (1982-87), Ikegami Ryōichi’s Mai the Psychic Girl (1985-86), and Shintani Kaoru’s Area 88 (1979-86). Serialized over thirty-seven, biweekly, American-style floppy comics, Shirato’s series has been long out of print. Individual issues are easy to find; the two-volume, collected editions from 1990 and 1999 much less so. There’s a lot of confusion as to what’s inside. Partially due to the chosen English title—The Legend of Kamui—many people assume it represents what appeared in Garo in the ‘60s (Kamui-den, literally The Legend of Kamuy), rather than Big Comic in the ‘80s (Kamui gaiden, closer to The Further Adventures of Kamuy). Some people confuse it with the animated version of Dagger of Kamui (1985), based on Yano Tetsu’s unrelated novels, and first released in English as Revenge of the Ninja Warrior. Few people realize that it was drawn/inked by Shirato’s brother Okamoto Tetsuji (1933-2021, who passed away a few days after Shirato), as he isn’t credited anywhere in either the floppies or the books, though it does say Akame Productions prominently on the cover.

Under the advertising banner of the “Number One Selling Ninja Comics in Japan,” the choice to import Kamui Gaiden from among Shogakukan’s vast catalog of quality manga reflected the unabating craze for ninja among American children, represented by numerous kitschy “American ninja” movies, toy shuriken and sai, and blockbuster cross-platform franchises like Teenage Mutant Ninja Turtles, begun as a black-and-white comic book series in 1984. Meanwhile, Tetsuji’s harder, darker, more realistic and mature drawing style—“gekiga” before that word was known in the West—would have resonated with the immense popularity of Kojima Gōseki and Koike Kazuo’s Lone Wolf and Cub (1970-76), which had also been translated in 1987 (First Publishing), with covers drawn by Frank Miller, who had been reworking influences from Kojima/Koike gekiga and jidaigeki films in his own comics since the early ‘80s, beginning with Daredevil (1981-83), Wolverine (1982), and Ronin (1983-84), and continuing with Batman: The Dark Knight Returns (1986). I have met many people in the United States who assume Shirato was influenced by Lone Wolf and Cub, the style of his manga changing so radically between the ‘60s and ‘80s. The truth is complicated. The first half of part one of The Legend of Kamuy had been penciled by Shirato but drawn by Kojima, whose work until then was deft and detailed but stiff when it came to action. Kojima left The Legend of Kamuy to work on his titles in 1967, achieving fame with Lone Wolf and Cub, which undoubtedly influenced Tetsuji. So, the answer is yes, Kamui was influenced by Kojima—but it requires distinguishing the multiple, evolving hands attached to the name “Shirato Sanpei.”

When I moved back to the US in 1988 with my parents, my Family Computer (Nintendo), and my Shōnen Jump tankobon collection, I recall being surprised by the large number of ninja in American comics, though the only one I truly enjoyed was the new Wolverine series (1988-2003) by Chris Claremont and John Buscema. I’d have to reread it to see if there are any Kamui influences in it, or in any other of the countless American ninja comics published in the ’80s and ‘90s. Interestingly, one of the most famous artists to profess having been influenced by Kamui Gaiden is Wendy Pini, co-author of the medieval fantasy Elfquest (1978-present), who reportedly picked up the Japanese tankobon in a San Francisco bookstore years before the Viz/Eclipse edition came out. The influence of Kamui Gaiden is particularly obvious in Shannon Tindle’s stop-motion animated feature Kubo and the Two Strings (2016). It would be worth writing an essay about Lone Wolf and Cub, Kamui, and America.

For as long as I have been involved in manga research and translation, I have heard fans clamoring to read more of Shirato’s work in English, particularly Ninja bugeichō and The Legend of Kamuy. Not infrequently, I receive pleas that I personally make something happen. Such cries have grown louder since Shirato and Tetsuji passed away. Alas, even if I cut my arm off, I doubt it would sway the rightsholders. I have attempted to license Shirato’s work numerous times, each time failing. One can only pray that Shirato’s nukenin (apostate ninja)—once the avant-garde of English-translated manga—will soon come out of hiding and rejoin the international fold.

This article was originally written for the special issue of the alt-manga periodical Ax no. 144 (December 2021) dedicated to Shirato Sanpei, where it appears in Japanese.

The post A Portrait of a Manga Scholar Offering His Arm to Shirato Sanpei appeared first on The Comics Journal.