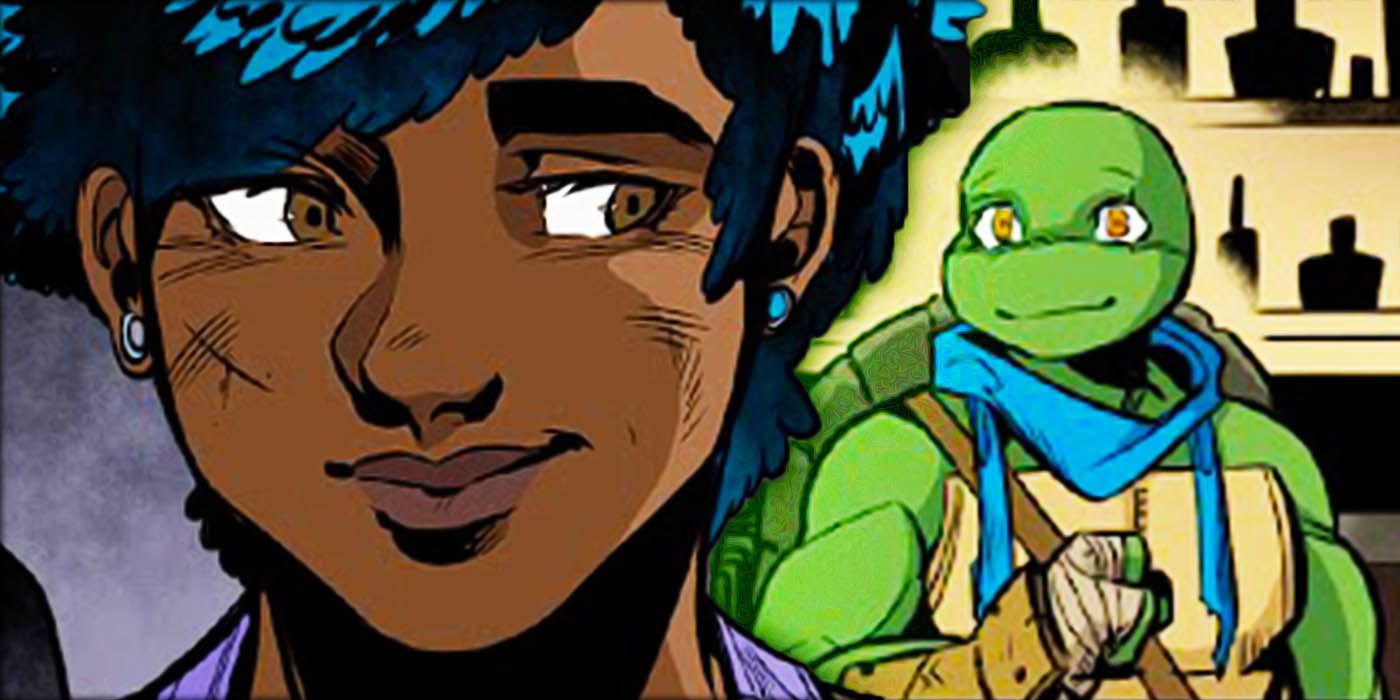 The Teenage Mutant Ninja Turtles have always struggled, whether it be with the myriad of menacing figures or their very nature as something other than human. In the case of the latter, the Turtles are far from the only ones dealing with life as mutants. Thankfully, the people of Mutant Town have managed to overcome the odds, bringing together both communities and opening the door for more intimate levels of human/mutant relationships. Of course, that too comes with its own issues, though the finer details probably don’t matter as much as they would seem.

Ever since wresting control of Mutant Town from the Mutanimals‘ grip, the Turtles have all found their own ways to relax… except for Leonardo. His new, lonelier status comes after losing his father, to whom he was arguably closest. As he tries to find a place in life without Splinter, he happens upon an underground fight club, which has become a frequent hotspot for the likes of Casey Jones. 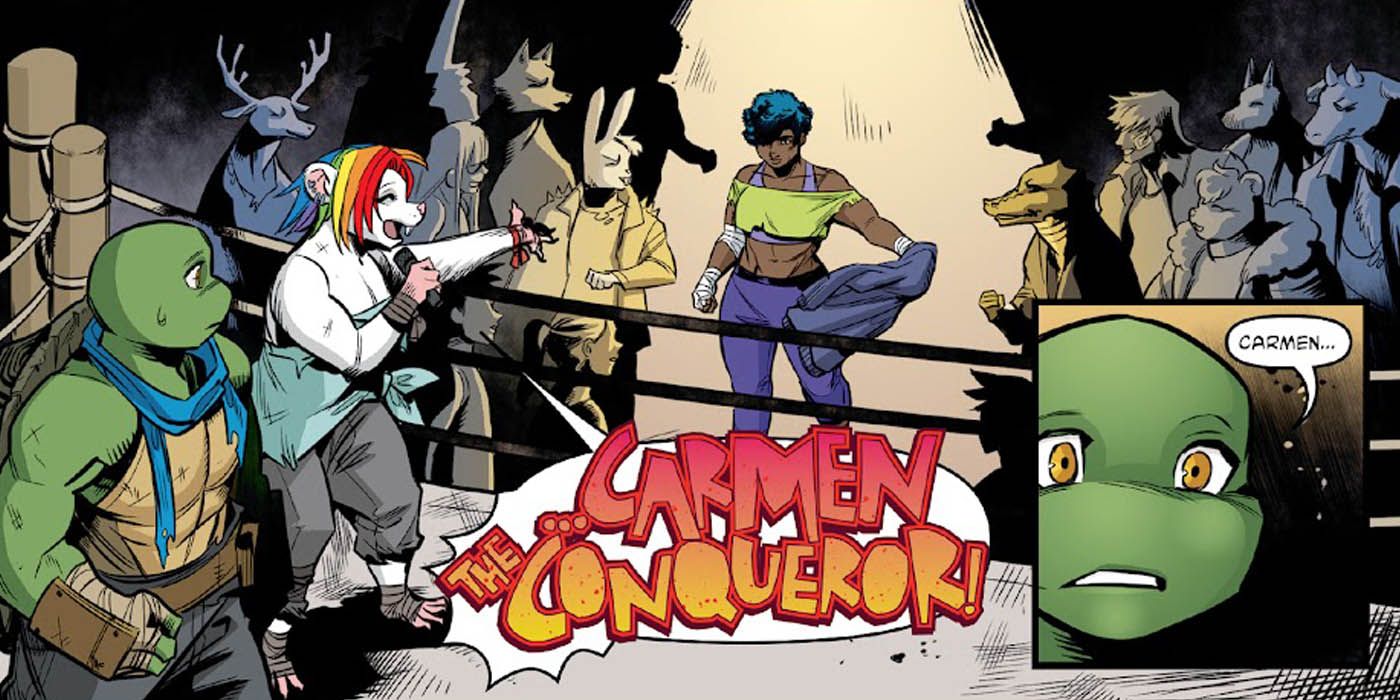 The impromptu ring isn’t the only thing that catches Leo off guard. When he finally decides to step into it for himself, he is greeted by a challenger whose name he has heard, even if they’ve never met – Carmen. As seen in Teenage Mutant Ninja Turtles #123 by Kevin Eastman, Tom Waltz, Sophie Campbell, Jodi Nishijima, Ronda Pattison, Shawn Lee, and Bobby Curnow, punches aren’t the only things flying between these two, as there are certainly some sparks between them as well.

Thanks to the time-traveling Lita, Leo is well aware of how important Carmen is supposed to be to the Turtles’ future, and it doesn’t look like there will be any trouble in keeping her around. When their bout is over, Leo promises to teach Carmen whatever she wants to learn at the dojo, something she is clearly interested in, though maybe not as much as the Turtle, himself. At the moment, it’s a cute scene between two somewhat awkward characters. Looking forward, though, it opens up the possibility of the kind of relationships that might make heads turn.

Whatever romantic tension there is between Leo and Carmen could certainly be built upon, but it also pushes forward a discussion about how the more intimate aspects of their relationship would work. Of course, Leonardo wouldn’t be the first mutant to enter into a relationship, let alone the first Turtle, with Raphael and Alopex getting together. At the moment, though, it’s slightly different regarding Leonardo, and his clear attraction to the human Carmen.

Given the tenuous and dicey dynamics between mutants and humans in the story right now, having one of the Turtles fraternizing with a human could ignite more than a few unwelcome fires. Of course, given the sociopolitical exploration in the TMNT comics in recent issues, it’s very possible this might be an integral part of the story — challenging dynamics and breaking down boundaries, this time using the “forbidden” love between two fierce leaders of two very divided groups. That said, there is another wrinkle to this budding love affair, if it is that at all. 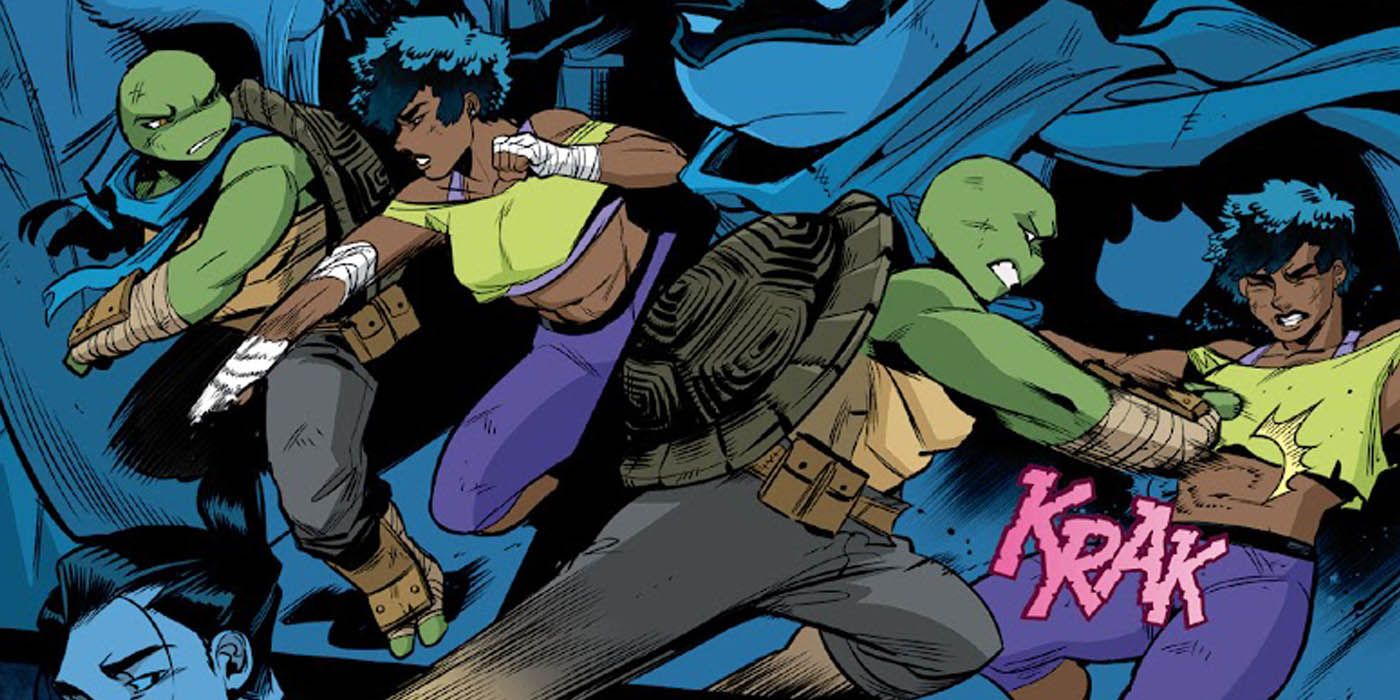 The flirtatious relationship between Leo and Carmen may be new, but the potential for one between him and Koya has been around for a long time, not to mention having been seemingly confirmed by the time-traveling adult Lita. That could add extra conflict to whatever this thing between him and Carmen could become, and as with the various groups teetering on explosion, a love triangle could be its own powderkeg.

Of course, the future is hardly set in stone, and there is always the possibility that everything Lita said really will come true… or it won’t. In either the case, readers may not ever get the answers they have regarding mutant/human relationships, at least not for now.