Maya Escobar is a first-year CCS student and a former librarian who specialized in YA fiction, but she especially loved comics. She decided to throw her hat into the cartooning ring and the early results are promising. Sucks To Be U is the CCS Aesop’s fable assignment, this time around based on “The Crow And The Pitcher.” That’s the one where a thirsty bird dropped pebbles into a narrow-necked pitcher, until the water was high enough for them to drink. Escobar’s version shows that she’s certainly got chops as a cartoonist, and she’s funny to boot. The crow wears a little Clash t-shirt for some reason, and there’s a marvelous physicality in how she draws the crow picking up what seem to be odd-shaped rocks. Of course, they turn out to be something else altogether, adding an additional dark gag to what is usually portrayed as an upbeat, aspirational story. 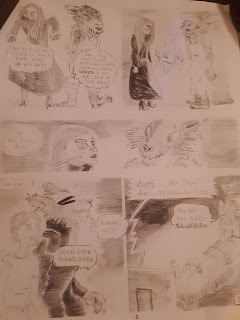 Swap Night is a three-pager that’s also a gag comic, albeit one that relies on horror trope. A showdown between a vampire and a werewolf is halted when the vampire accidentally cuts herself with a blade. That results in a stalemate and a surprising trade. Escobar’s pencil work here is extremely confident and fluid. There’s still some stiffness with regard to how the characters interact with each other in space, but the character design is crisp and attention-getting, while her line feels energetic and spontaneous. The whole thing just has a nice bounce for a story with a very simple gag and payoff. Comedy-horror may well be her path in comics for the moment, and she’s well on the way to crafting stories that will no doubt be entertaining.