Meg Selkey’s offerings for this year both involve children in different contexts. Mothering is a fascinating short mini in full color about the intersection between being an artist and the urge to become a mother. It asks the question: “Is it selfish to want to create a person?” As an artist, Selkey reflects on art and play as a process of creation and nurturing. She also refers to a funny and misogynistic quote decrying women becoming artists, because they already get to create life. Of course, from a philosophical point of view, when a work of art is done, it is only done when it is shared with the public. From that point on, the artist has no control of what the piece means, or rather, no more control than anyone else. This is quite the opposite with a child when they’re born, where there is the dueling but congruent tension of guiding and nurturing the child while encouraging their own agency. Selkey’s splashy and splattered color mimics a kid at a mini-easel while actually drawing that very thing, before it segues into more muted but gorgeous and expressive line art. 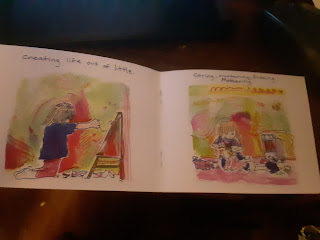 Matching is a wordless story involving two babies, presumably twins, being presented to each other. Each page features three different moments in time, as they grow up in each other’s orbits. Sometimes this is depicted as extreme closeness, sometimes as occupying the same space but not interacting, and later as the kind of intense conflict that only siblings can have. It also has the kind of rapprochement and caring that only siblings can have, as they revert back to their early, physically comforting interactions. There’s a beautifully poetic quality to Selkey’s work that’s tantalizing, given that I’ve seen so little of it. But I’m curious to see what shape her thesis will take at CCS.