Madi Baker is a thoughtful young cartoonist with a measured, distinctive voice. Her line is clear, slightly cartoony, and highly assured. It’s clear that her future lies in some kind of journalism comics, because her observational powers and ability to convey information are strongly developed, and it’s clear that she’s willing to do the research and detail work necessary for that kind of endeavor. She submitted three comics for review, each of which was different in terms of topic and approach, yet all were entirely in a singular voice. 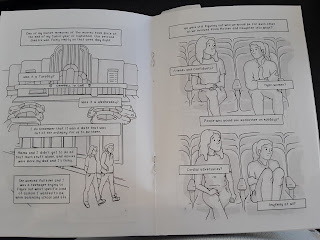 Now Showing is a memoir comic, and it works because Baker finds an effective hook to hang some difficult topics on. In this case, it’s her genuine love not just for movies, but for the very particular experience of seeing a film in a theater. Much of the comic, which consists of several different vignettes from across her life, concerns her youth and adolescence, and what movies meant to her. There’s an irresistible image, repeated at the beginning and end, of Baker as a young child hiding in a laundry basket near the living room, hunkered down so she could watch movies after her bedtime. She revisited that later, saying that she never remembered actually going back to her room, but she always woke up there. She marveled that it was never mentioned and that she never got in trouble for it.

The best memoirs purport to be about one thing but are really about something else altogether. Such is the case here. Certainly, the importance of film and the sublime aesthetic experience of the lights coming down to create a transformational experience are essential to this comic. But I’d argue that Baker’s difficult relationship with her mother forms the emotional core of the narrative. That’s borne out in a story where a heated argument leads her to the comfort of her older brother’s room, where she watched Jurassic Park but really got unconditional acceptance as well as warm & smart advice. “Movie Hopping” is the key story, however. There’s an amazing line where Baker frankly discussed that she wasn’t especially close to her mom, especially in terms of doing stuff together. One time, where she “was a teenager trying to figure out what specific kind of asshole I wanted to be,” (great line!) she and her mom went to see a movie. Baker was especially sullen, but her mom surprised her after the movie when they snuck back in and watched a bunch of other films. It was performative in the best possible way, and Baker’s cartooning (usually fairly austere) gave it a little extra oomph with some of her mom’s physical expressions. 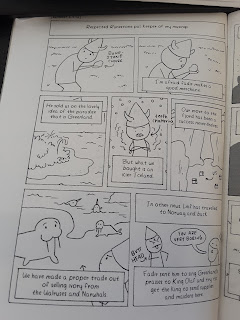 Thorvald Erikson In His Own Words: A Somewhat Historical Retelling is a very funny account of the slightly less famous brother of Leif Erikson, the Icelandic explorer. This was drawn in the classic CCS Ed Emberley assignment mode, wherein the cartoonist had to use the Emberley building blocks of circles, triangles, and squares to draw everything simply. Baker paints this story as a sibling rivalry, where Thorvald was annoyed by his brother hogging all of his father’s attention on their journeys. Later, he becomes even more annoying when he becomes a Christian after visiting Norway and tries to foist this off on everyone else. Despite these embellishments, Baker still nails all of the historically accurate details, including that Thorvald became the first recorded European to be killed in North America. Baker used this drawing style to great advantage, with lots of gags and eye pops, as though Thorvald was doodling in the margins of a textbook. Fad Pets is part of Baker’s larger CCS thesis project, and it shows a clear way forward for her as a cartoonist. While her memoir and gag work was good, she has the potential to be a great comics journalist. There’s a measure I often take when a comics journalist takes on something they feel especially passionate about. When their approach is measured and restrained despite that passion, I take notice. It’s easy to rant and argue in bad faith or on manipulative & emotions grounds when trying to forward a position that’s important to you. Baker resisted every one of these temptations in talking about the “fad pet” phenomenon. This is when some outside media influence creates a high demand for certain kinds of pets. Most notably, she talks about how this happened multiple times for dalmations, after the release and subsequent reboots and sequels of 101 Dalmations.

Skillfully interweaving her own experiences growing up with a dalmation as well as currently owning one with statistics, critiques of breeding, and a deep dive into the history of dog shows. What this comic really is a very civil rant about people who buy pets as a form of cheap entertainment instead of understanding that not only is it a frequently difficult commitment, an owner has to meet a pet where they are. Dalmations are destructive and years of inbreeding has led to all kinds of medical issues with them. Pets aren’t toys or products, which is what the cartoons make them seem like. Baker doesn’t soft-peddle how difficult her dogs were but also notes the benefits–love, companionship, developing empathy–can go far beyond the cheap pop of that initial “awwww” feeling some get when they see a puppy. I’m interested in seeing how this will be expanded, but everything about this is crisp and professional. She reminds me a lot of Dan Nott’s approach (and Josh Kramer’s, to name another CCS grad who does comics journalism), providing a smooth and compelling take on a subject I know little about it and keeping my interest.

Andrew Garfield Stars In Under the Banner of Heaven FX Trailer