I only received two very short comics from Sofia Lesage, and one of them was the annual Aesop’s fable assignment from CCS, but it’s clear that she knows her way around a pencil. Cactus Story is a tiny zine about a young woman emerging from a cactus, doing a handstand, and then hiding under the cactus for shelter when it rains. It’s very sweet, even if it mostly seems like a clever way to experiment with a few different effects like grayscale shading and zip-a-tone. Lesage’s line is very strong, however, and the effects only enhance the comic. 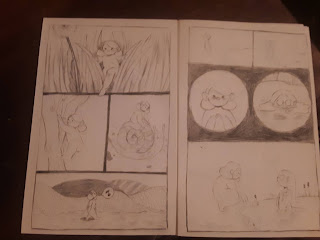 The Frog And The Mouse is a silent, sketch, anthropomorphized, and very cutely-drawn version of the story by Aesop. Shooting exclusively from her pencils, Lesage’s drawings of the mouse being lured underwater by the frog belie the nastiness inherent in the story until things go horribly wrong. It’s all in the details: the lines on a snail the mouse rides, the different kinds of strata on the hills she walks by, and the sketchy simplicity of the pond itself. The mix of naturalism (like a hawk swooping down to grab them both) and cartoony work on the other characters feels organic and balanced, in part because Lesage’s chops are more than up to snuff with regard to rendering. However, her storytelling and pacing are also quite good. She’s definitely got the chops, and I’m eager to see her tackle longer project.

Tunic’s Fox Language Has Been Translated by Fans