Even before she entered CCS, Leda Zawacki was making interesting comics. She’s only greatly advanced since then, making enigmatic but deeply personal and human comics. They touch on trauma, problematic relationships, and yearning. The deliberate narrative vagueness combined with her light touch as a cartoonist remind me a bit of Gipi and Lilli’ Carre. As a draftsman, her style seems fully formed at this point, with a lot of beautiful gestural cartooning that’s enhanced by her use of color. Her background in design is fully evident, given the obviously careful consideration to how she prints her comics. For example, she works at around 8.5×11″ in publishing her comics, giving them a chance to really breathe on the page. What makes her fully-formed as a cartoonist is her ability to merge form and content; her expressive figure drawing and tasteful use of color directly amplify the emotional narrative of the story, allowing Zawacki to show restraint and amp up tension and ambiguity. 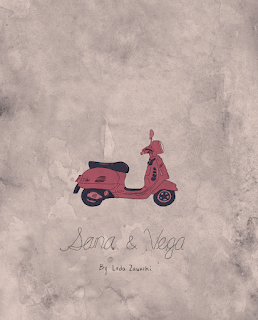 In Sana & Vega, for example, the narrative hook is simple: a young woman hires a delivery service (another young woman on a motor scooter). While the driver, Vega, initially balks at this (wondering why the other woman didn’t just call a rideshare), she agrees to do it when the other woman (named Sana) begs her. The result is a journey filled with both comfort and a degree of romantic tension, but it’s also about trauma and loss. There’s also some danger on the way, as Sana’s mere presence seems to anger random men in a gas station. After Vega drops her off, she waits for her outside of the house–and has to wait a while. The implication is that Sana, carrying a box with some toys for a young child, was seeing her child for a brief period of time, but couldn’t stay longer–especially since she emerged from the house crying. The character design is top-notch, as both women have completely different looks and yet fit into a single aesthetic. Zawacki’s use of close-ups of their face and the occasional splash page are effective, but where she really excels is the way the characters relate to each other in space. It brings up those feelings of yearning, despair, and comfort, especially when Sana is holding on to Vega on the bike. 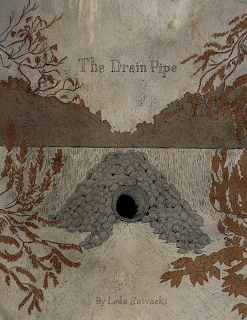 The Drain Pipe is a little more conventional, as it’s about a young woman going to her father’s house in North Carolina during winter break. Zawacki quietly clues the reader in on a number of things: she has a clingy girlfriend that she’s obviously thinking about breaking up with; this isn’t the house she grew up in, leaving her a bit betwixt and between; and her attraction to one of her friends who invites her out. Despite the fact that this friend (Helen) had a boyfriend, she still found her attractive and thrilled to little gestures like a touch on the shoulder and the attention she paid to her. There’s a scene where Helen shows her a nearby drain pipe near her house where she and her friends liked smoking pot. Zawacki transformed this into the feminine unknown as the main (and unnamed) character had an intense sex dream about Helen in said drain pipe. A miscommunication led to her not coming out to smoke the next day, leading to intense pining and yearning for this potential fantasy scenario. In the end, she started reading her girlfriend’s (many) texts again.

This is a comic that truly is about being in a transitional phase: dissatisfied with everything in one’s life, wishing for some kind of magic or a person to sweep you off your feet. There’s an intense sense of verisimilitude in the scenes in the local musical venue (I actually wondered if this was meant to represent Chapel Hill, given that The Cave is an actual venue and everyone in this story felt VERY Chapel Hill/Carrboro to me) and Zawacki expertly evoked that sense of being young and a little lost. Interestingly, both comics, which were both about intense character relationships, did not feature people on their covers. It’s a sort of visual metanym: the bike stands in for the women, and the drain pipe stands in for this sense of vague desire. Once again, Zawacki’s character design, her tasteful and restrained use of color, and her overall sense of restraint revealed that she is ready for big things.