Mercedes Campos López is a cartoonist whose work is ideally suited for YA and middle-grade success. Her latest, Sleepover Sleuths: The Eileen Mór Lighthouse Disappearances, has an irresistible hook: three teenage girls (and an annoying but engaged younger brother) have a sleepover in order to discuss their personal theories behind real-life mysteries. In this case, it’s about a Lighthouse where the three keepers mysteriously disappeared without a trace, leaving behind a plate with food and beds that were made up. It’s a great enigma that’s stood the test of time, given a lack of evidence to support one theory over another. 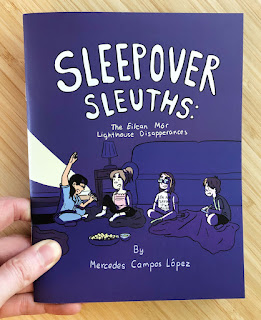 That made it perfect fodder for a story like this. In a comic that mixes the feel of sleepover and sibling dynamics with that of a fun true-crime podcast, López crafts three different narratives for the case, one for each of the three girls. One postulated a murder and tried to back it up with (discredited) logs from the youngest member of the crew. Another suggested the island was cursed and they were sucked into a dimensional rift, while a third suggested the boring but plausible theory of extremely high waves sweeping them away. López deftly added some nice narrative structure when the dad of one of the girls breaks up the party in terrifying fashion. 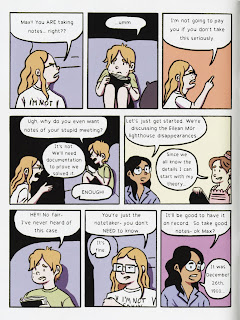 The storytelling is solid throughout, However, López’s line is shaky at times. She covered some of that up with her use of color, but the color saturation pushed her to use a thicker line, which was not to her advantage as an artist. This is also a case where computer coloring got a little out of hand on some pages, distracting the eye away from the line and character expressions. It seems like López’s strengths are as a “first line, best line” cartoonist who is all about using a sketchy style that displays emotion and character relationships as they relate in space; the use of color and excessive embellishment disguises that. I suspect that this is something that will work itself out in time. The comic feels like an attempt at doing a polished YA work but not quite yet having the chops to do so. In terms of storytelling and characterization, López is right there. The devil will just be in the details and continuing to refine her process.