Masha Zhdanova deals in science-fiction stories that focus on the effects of technology on human relationships. In Golly, for example, a lonely young woman named Cordy learns about what real friendships should look like after venting to a “companion bot” at a local restaurant chain. The Ollybot is programmed to remember its customers, listen, and make occasional promotional statements. For Cordy, these are things she needed but didn’t get, especially from her friend Anise, who had left town to become a model. Anise only tolerated Cordy because of their mutual friend Kam, but a fawning Cordy would do anything for Anise. 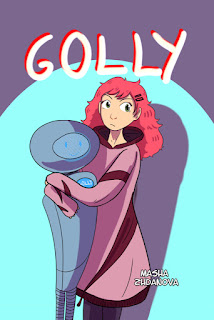 When Anise came to town (after she lost a key gig), she tried to keep that paradigm going. It took the Ollybot being decommissioned to make Cordy understand what she needed and wasn’t getting from Anise. While I’m not an expert on the style, it seems clear that Zhdanova’s clearly influenced by shojo manga in her character design, mixed with that strong CCS storytelling that all of its grads are trained extensively in. The drawing is stiff and awkward at times, but Zhdanova’s storytelling is clear and her ability to portray emotion carries the comic. 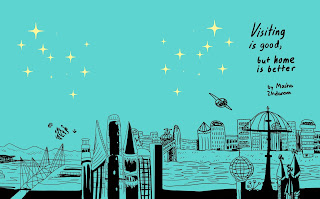 Visiting Is Good, But Home Is Better is the best kind of autobiographical comic: one that’s fictional. Zhdanova was born in Russia and still has family there, but she was mostly raised in America. In this mini, a child named Nika leaves Rustica with her family to go out as part of a colony on Setsunia. Her parents split up not long after the move and returns to Rustica. The comic is a series of visits by Nika back to Rustica over several years. Each time, the way she feels about Rustica changes as she grows older and builds a life on Setsunia. Her father marries again and has another kid, and Nika finds it harder and harder to keep up with a language she doesn’t speak as much anymore. 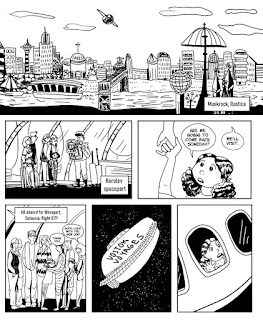 More than anything, this mini is about perspective and relationships. Places become part of your essence, and one’s daily habits and relationships alter one’s neural pathways. Returning to old places causes cognitive dissonance; not only because nothing remains the same forever, but because even familiar things aren’t the same because you’re no longer the same person. Zhdanova’s art had to carry a lot of unspoken aspects of the narrative, and it was more than up to the task, even on pages where her line was a bit wobbly. I suspect as she continues to draw comics, her own style will emerge and smooth out her line.
What’s important, as evidenced in the micro-minis Memories Of K-Pop and Single Lines Of Songs I Know Completely Without Context Because My Family Sings Just These Lines All The Time, is that her line is highly expressive. Her initial, fast sketches capture a lot of emotion. They key will be refining that line slightly and experimenting with how bodies relate to each other in space, as well as how bodies relate to their environment.

Why Did DC Sue a Tarzan Cartoon? | CBR